25 Modern Wall Clocks That Will Change Your View on Time

Although many still go for a traditional round shape, you’ll see that many of these designs take unconventional misshapen forms in their quest to become more conversation-starting and less utilitarian.

Dotti Clock from an Australian designer Abi Alice is a minimal piece made of steel and covered in colored epoxy resin. Inspired by those “sticky dots” from stationery shops the clock has cute hands that echo its very circular shape.

Available in Super white, yellow, and turquoise Dotti is the cutest kitchen clock we’ve ever seen.

In search for something more fitting for a cool contemporary interior? Casa Bugatti created a stylish clock resembling smooth water surface slightly disturbed with an impact from a rock.

Blown glass and stainless steel lend it gorgeous minimal aesthetic that would decorate any minimalist dwelling.

DO NOT DISTURB is a work of designer Ernest Perera who used his own cnc milling machine and hands to finish his creations. Intended for contemplating rather than glancing to know the time this geometric piece is simply a looker.

Made entirely out of wood DO NOT DISTURB also showcases the power of little brass hand accents that can transform the look of an entire timepiece.

Time Maze is a creation of a renowned architect and designer Daniel Libeskind. Manufactured by Alessi the clock isn’t just a revolt against tradition. Shaped in a form of a broken line the timepiece says that time doesn’t have circular continuity of a looped straight line but rather that of a maze.

It may not be as convenient to tell the time, but it makes you think about it. Besides, every device today has an inbuilt clock.

Sophie clock is another design that stepped away from the classical circular shape and also allows users to experiment with its form even after its production.

Consisting of two overlapping details made of painted plywood the clock’s shape can be adjusted with just a move of a finger.

Time2bee is a fun timepiece for a kid’s room. Bright and misshapen it comes in a hexagonal print with a little bee fixed to a minute hand gently reminding of the preciousness and value of time.

It also looks like a fraction of a beehive that could change shape, if it was to be supplemented or completed. It’s amazing how such seemingly simple design provokes so many ideas and thoughts.

Shaped as a cone Mozia resembles a button more than a timepiece, its hour and minute hands looking more like mismatched threads.

Available in a wide range of colors they look very modern and yet very refreshing.

Color-House Cuckoo Clock is like none you’ve seen before. Elongated cuckoo bird house made of plywood is painted in eye-catchy bright stripes that contrast with an elegant black frame.

Equipped with a light sensor it doesn’t allow the bird to chirp at night, with only the pendulum gently swinging through the side openings of its structure.

Bright but minimal, seems to be a motto of the modern wall clocks design. Take Clock25 by Sabrina Fossi Design, for example. Featuring a double face, it places an accent on just two numbers of 2 and 5, leaving the rest of it clean and bright.

The rest of her designs are as minimal and you can find a lot of designer wall clocks in similar style on the market.

Wooden to the Core

Puff Wall Clock by Gorjup Design is a wall decoration first. Made of 35 wooden parts, it protrudes and shows off instead of blending with the wall.

Available in dark wood brown and pristine white, Puff will certainly become a focal point of any living room.

Another intriguing clock from Gorjup Design is RoundSquare made of several layers of plywood like some misshapen cake.

Each of the 11 laser cut layers takes a more squared form than the previous one, so that its face ends up as a small rounded square.

It is remarkable because it’s handmade and versatile because it could fit into an interior of any style from traditional to contemporary.

Tag Clock got a very fitting name or did it draw inspiration for its shape from the original? It doesn’t matter. Just look at that exquisite fabric-like wood.

Teak, elm as well as paper pieces are so light they could be hung anywhere without so much as a single nail.

Naoto Fukasawa designed a clock inspired by the ancient tradition of a gold leaf. Made of thinnest metal silver, gold, and copper clocks look like ancient coins.

With just an hour and minute hands they also show hours, which is a rare occasion for modern wall clocks.

Taking after ornamental doilies, these concrete clocks were funded by Kickstarter and allowed backers to get involved in their creation process.

Made of baltic birch plywood and real Norwegian reindeer moss this noktuku clock is a real designer item that deserves its own wall.

Two kilos (or 4.4 lbs) of moss is required to create one clock, but the good news is that after all is set and done the moss doesn’t require any watering or maintenance. How cool is that?

Scott Thrift’s Today clock is like a picture combining night, day, and dawn. And it’s not really far from the truth as it is a 24-hour clock designed to change your perspective of time.

Instead of showing numbers Today is all about showing you the approximate time of day where you could fit all the little but pleasant things.

Orbit tells time through discs instead of traditional hands. Minimal but beautifully eye-catchy this clock is for those who have nowhere to hurry and is satisfied to know only approximate time.

Available in a number of color combinations Orbit would look great in a mid-century modern interior.

Finally, a kitchen clock that makes a statement. Lithe by Studio Ve may look like a rolled out ball of dough but its dramatic hands are the main players here.

Long and elegant these hands would decorate any clock face design, but they especially stand out against this minimal circle.

Continuing a revolution of statement hands Studio Ve offers a Manifold clock to those looking to add some drama to their decor.

Connected with a colorful fold the clock’s hour and minute hands allow users to read the time as usual, but at the same time contemplate absolutely gorgeous configurations created by the fold.

UJI clock is a complete departure from a conventional timepiece. Reimagining a concept of a death clock, it allows the user to see their own heartbeat as the clock syncs with the sensors to move to the rhythm of the organ.

Modern Wall Clocks With a Hint of Nostalgia

Seeking to add some mid-century modern aesthetic to your decor? Here are some designs with a twist. Petal Clock by George Nelson is not only elegant it is also quite exceptional.

Minimalism is a very modern quality, but it doesn’t have to look dull and boring.

Uaigong looks like a modern twist on a grandfather clock. Stripped of any detail and ornament it is both simple and elegant. But it also catches the eye with its bold color. 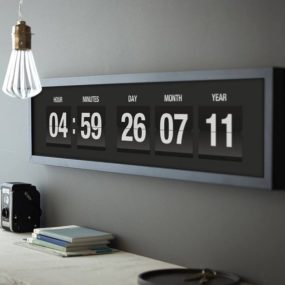 40 Cool Wall Clocks For Any Room Of The House 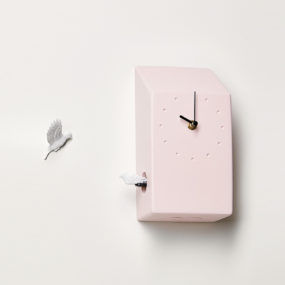 Even a Cuckoo Bird Needs a Friend: Time Flies Clocks by Haoshi 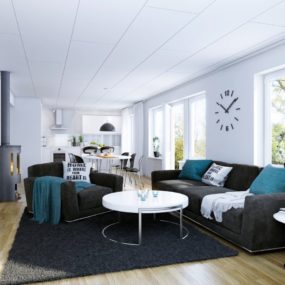 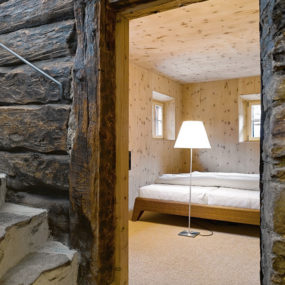 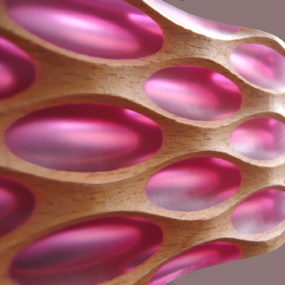 40 Cool Wall Clocks For Any Room Of The House

Even a Cuckoo Bird Needs a Friend: Time Flies Clocks by Haoshi