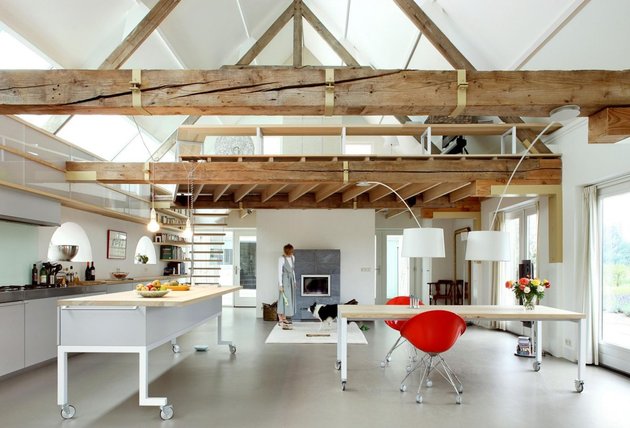 Maxwan Architects received a brief from their clients to reformulate an old barn located on 2 hectares bordering the river Linge in Geldermalsen, The Netherlands and create a home that included a large kitchen and living area as well as a place that customers could congregate for wine tasting sessions. The barn had already had one renovation by the previous owners which included a 10 meter extension for both floors but Maxwan Architects found the interior space of the renovated barn did not expose itself to the surrounding landscape and that all the openings in the facade where either too small, improperly positioned or both. So Maxwan Architects suggested a radical change to the original floorplan. They proposed inverting the layout of the private and public spaces by moving the offices and storage areas into the extension and relocating the private areas to the original barn areas. Views to the landscape from the second floor where created by cutting a large slit into the barn roof. These slanted windows also offered a direct path for natural daylight to flood the lower levels. Once the structural allocations and changes where decided upon the final touch was the design of a unique structure that melds the kitchen counter extension with the stairwell and library. The stairwell can be seen just past the kitchen island that free floats in the kitchen area on large wheels for maneuverability. The island is duplicated in its overall appearance by the dining table that features the same light wood surface and steel legs. The table is also on large castors as are the two molded red plastic chairs. Two pendants suspended on the exposed beams naturally swag over to the table for light as do a couple of lights over the island. The Rough hewn beams with their natural checking are a visual reminder of the humble beginnings of the barn, however there is nothing humble about the large spans of timber punctuated every so often by metal cleats. 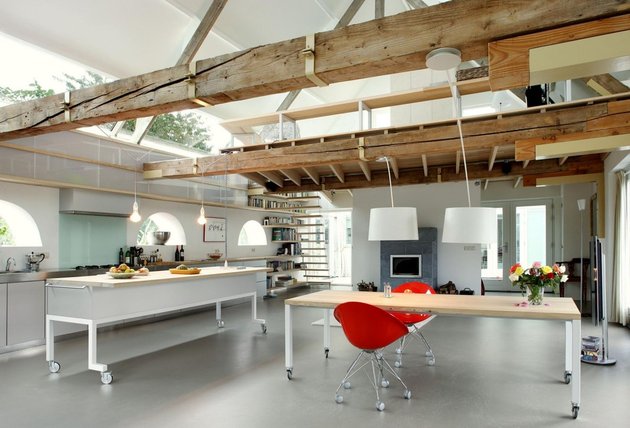 The sleek and modern kitchen is in direct contrast to the aged barn wood but the exposed beams of the 2nd story loft space tie the two together in a harmonious vignette of contrasts. The long line of windows at the base of the sloped ceiling creates a third dimension of materials that keeps the space feeling light and lightweight. The open tread stairwell continues this theme. The complete area is large and spacious – perfect for when wine tasting sessions need to accommodate large groups of people. 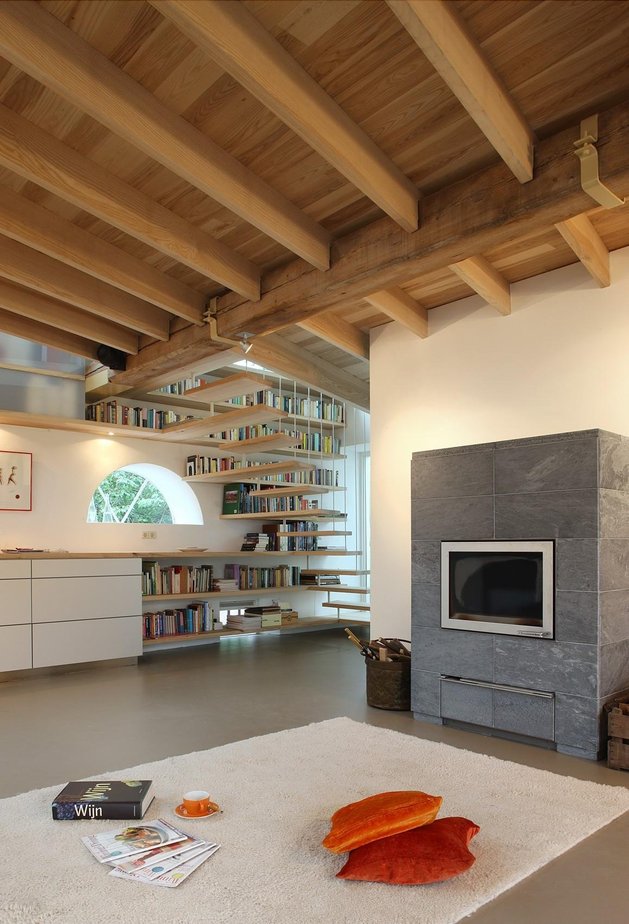 The fireplace is an understated stainless steel unit with a grey 12×24″ tile façade. Protruding from the wall, there is space on both sides for baskets of wood. 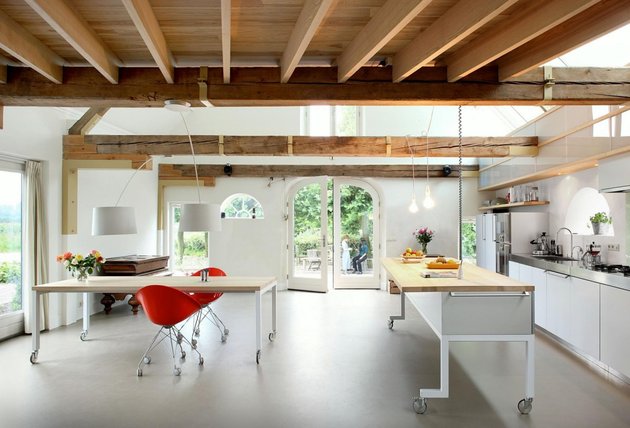 The entry to the home is through a pair of curved doors. The curvature of the doors and two windows appears to be a contradiction to the rest of the space but the addition of the soft lines plays off of the dining chairs and helps create a rhythm and flow to the space that would otherwise not be there. When the doors are left open, the home has an immediate connection to the outdoor deck – perfect for large parties on sunny days. 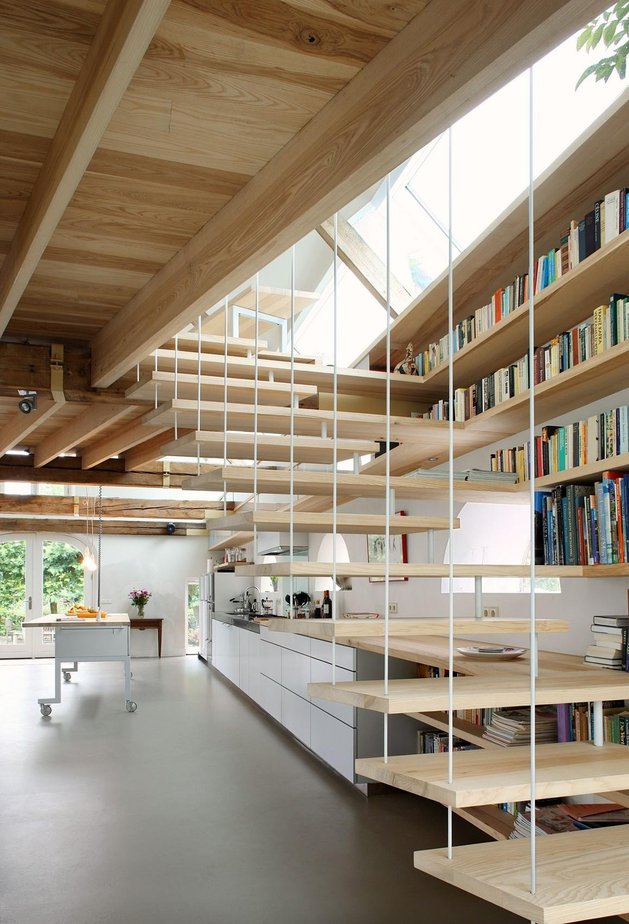 Just past the kitchen is the open tread stairwell. The fourth step continues in an L shape to become part of the extended kitchen counter and the second step continues in an L shape to become a shelf below the counter for books. As you climb the stairs more of the treads turn a corner to become shelves for the homeowners extensive book collection. The open side of the stairwell is supported with steel cables to allow the natural light from the windows to pass through them and light up the living space below. 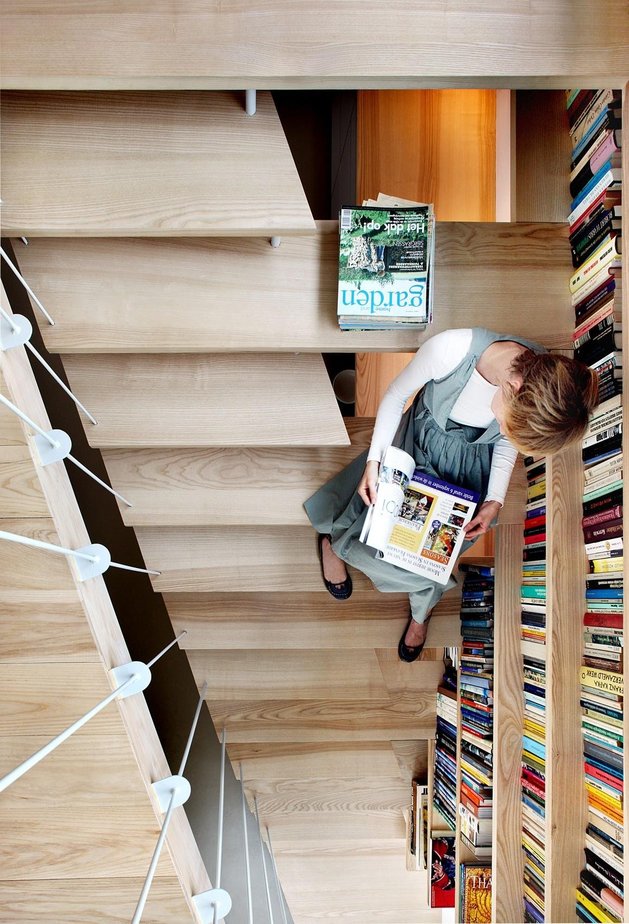 The strip of windows at the base of the slanted ceiling floods the library with natural light making the stairwell the perfect place to lean back and relax while perusing the vast selection of books. 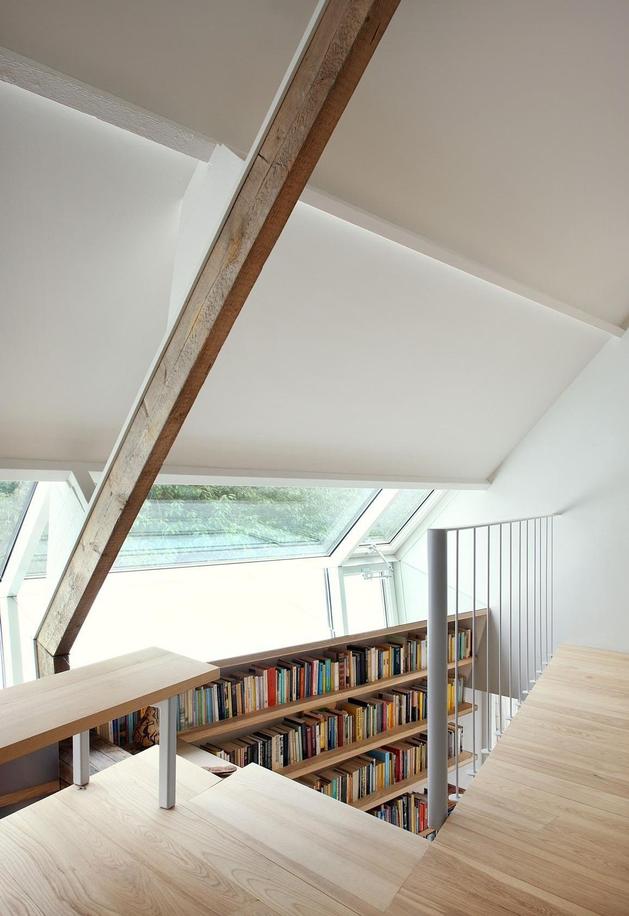 At the top of the stairs the steel cables continue to become the rail system and a bench with the same powder coated finish on its legs is in the perfect spot to sit back and enjoy the views of the landscape that surround the barn. 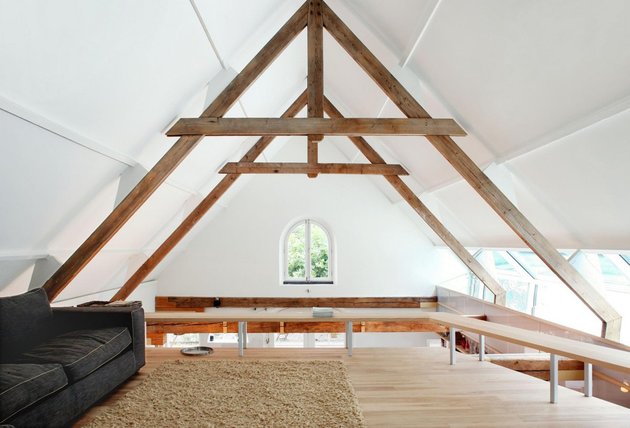 The bench continues all the way around the loft as wrap around seating while at the same time creating a barrier to the edge of the loft similar to what you might find on a deck. Above the entry and framed by the exposed beams, a clear-story window repeats the arch of the doors. The window and beams create a repeating pattern that emphasize the size of the space while the length of side windows stops the beams from feeling overpowering. 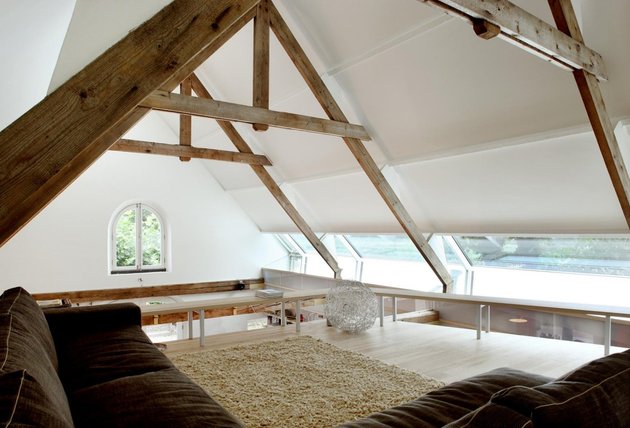 A large, comfortable sectional wraps the two sides of the loft opposite the bench. The sofa is upholstered in a deep brown to emulate the tones of the timbers while the shag rug repeats the colour palette of the flooring. 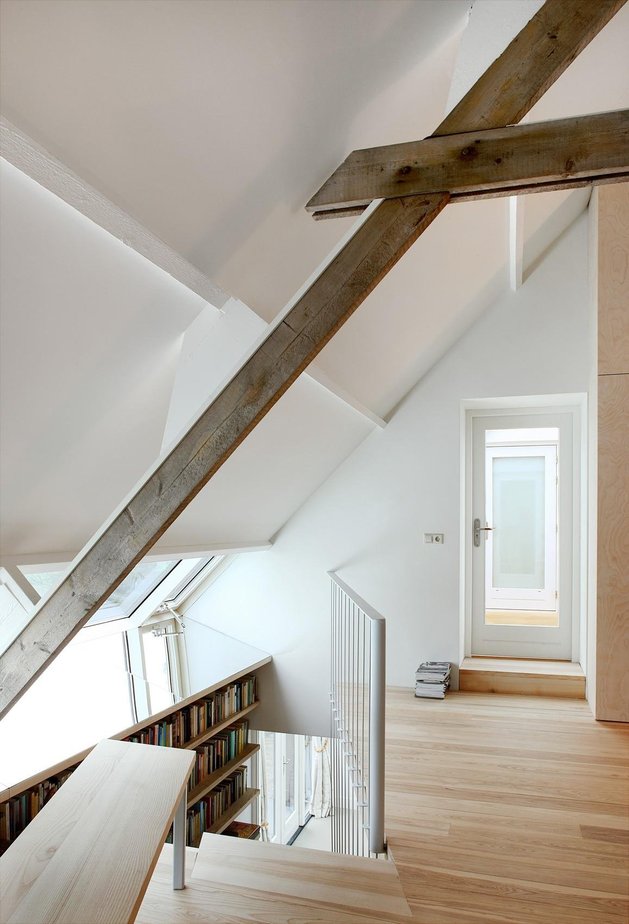 The far side of the loft leads to the Master Suite. Here a door closes off the area so that the homeowners can maintain their privacy – even while wine tasting sessions continue downstairs.
Maxwan Architects 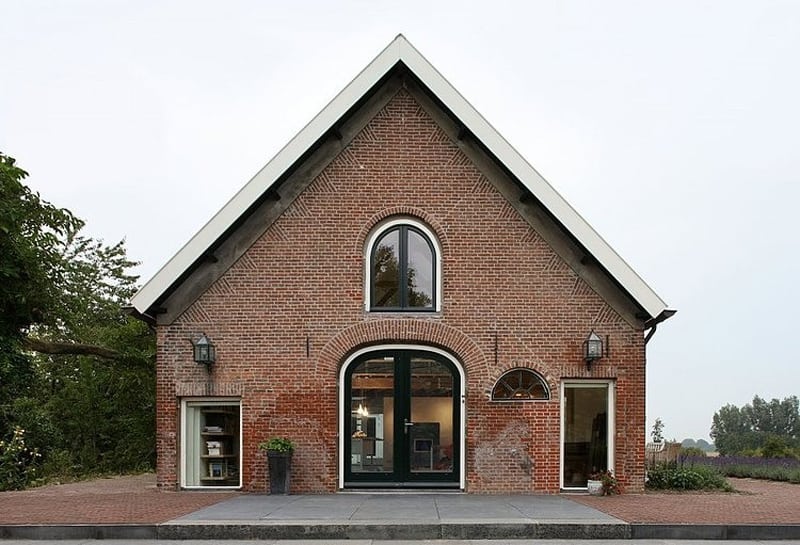 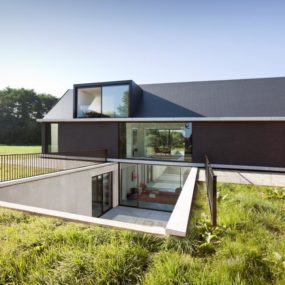