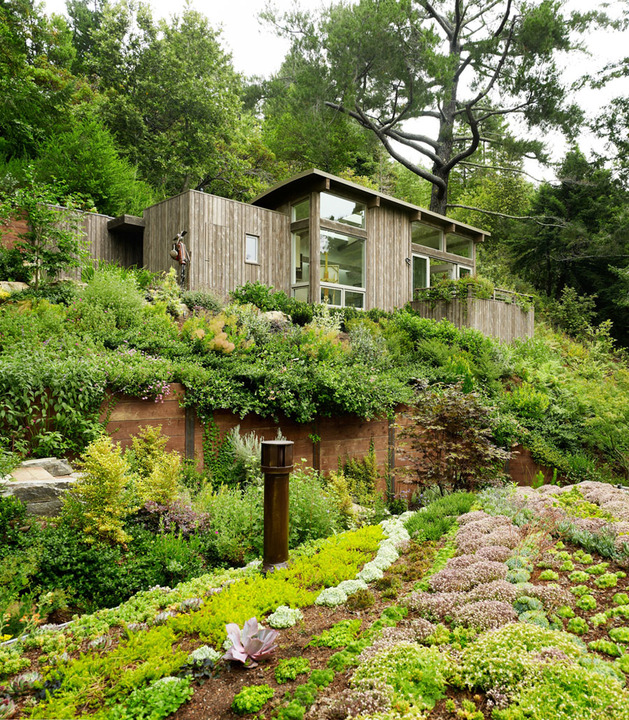 Feldman Architecture received a brief from their client’s in Mill Valley California, USA, to build two new structures within their property, one for an artists studio and one for a cabin that would do double duty as a yoga space and guest accommodations. The location of the new structures would be on a slope with the studio overlooking the guest cabin and for this reason, the client’s and architects opted to create a rooftop garden on the lower building, using it to feature a vista of low lying shrubs viewable from the studio above. Only the chimney stack gives it away. 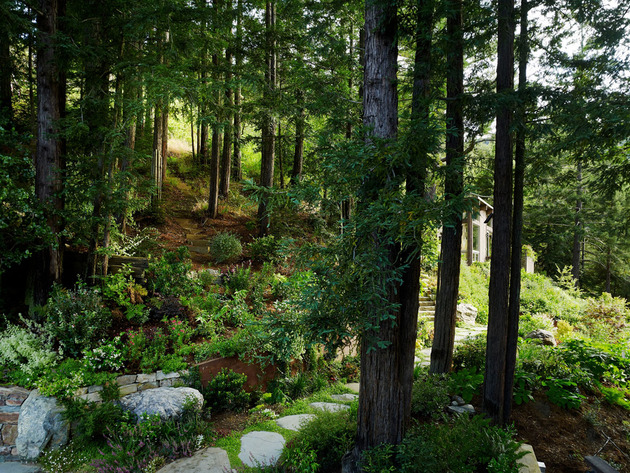 The Mill Valley Cabins are accessed from the existing home via a pathway of flagstones wrapped in moss that weaves through the naturally treed terrain. The location of the two new buildings was partly based on their minimal footprint within the existing trees as well as the sunlight and slope orientation. 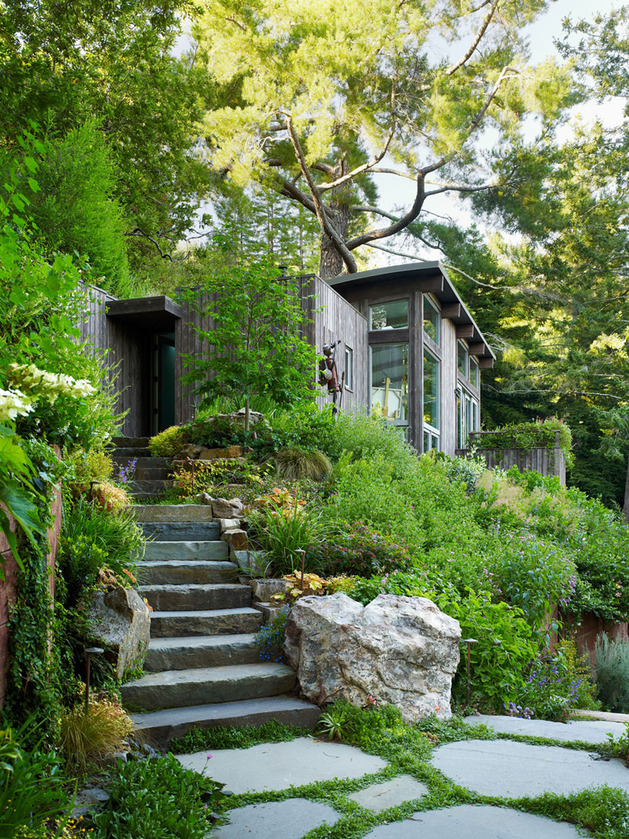 The artists studio sits higher on the slope and is reached through a rock stairwell cut into the slope. The homeowner, who loves gardening, has taken advantage of the tiered landscaping in front of the studio to feature a series of shrubs spilling out and over the embankment. The studio itself is clad in vertical siding, left unfinished so that it can naturally weather into a silvery patina not that much different then the rock stairs and the flagstone pathway. 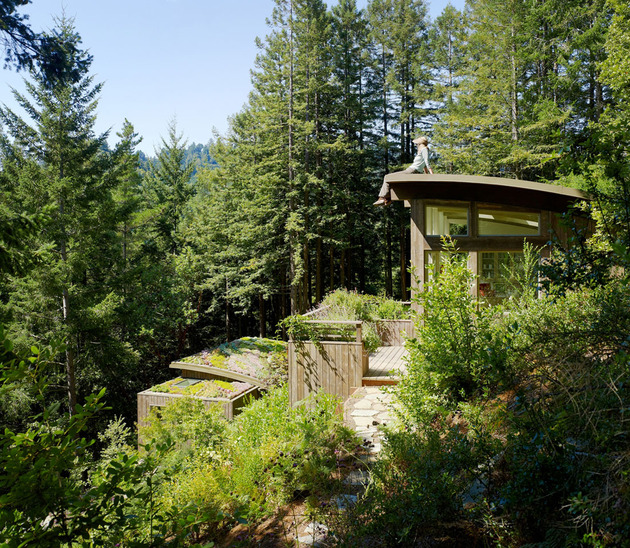 The studio has a deck that overlooks the guest cabin, but covered in a rooftop garden, the cabin blends peacefully into the surrounding landscape, appearing as an extension to the shrubbery in front of the studio. 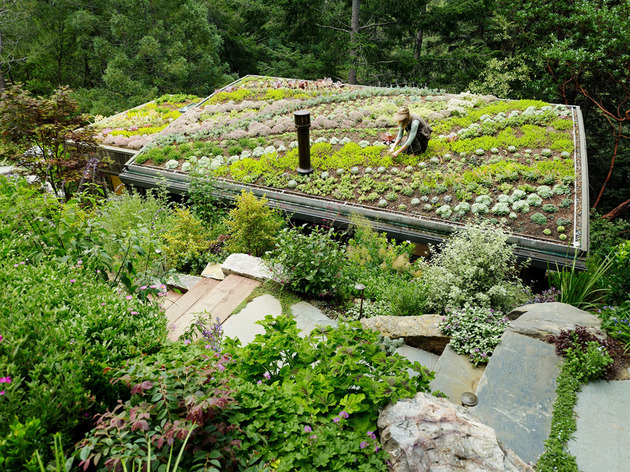 The edge of the roof gives the appearance of a garden edging and this visual is enhanced by the undulating rows of specimen shrubs. Even the chimney stack appears to be part of the garden. 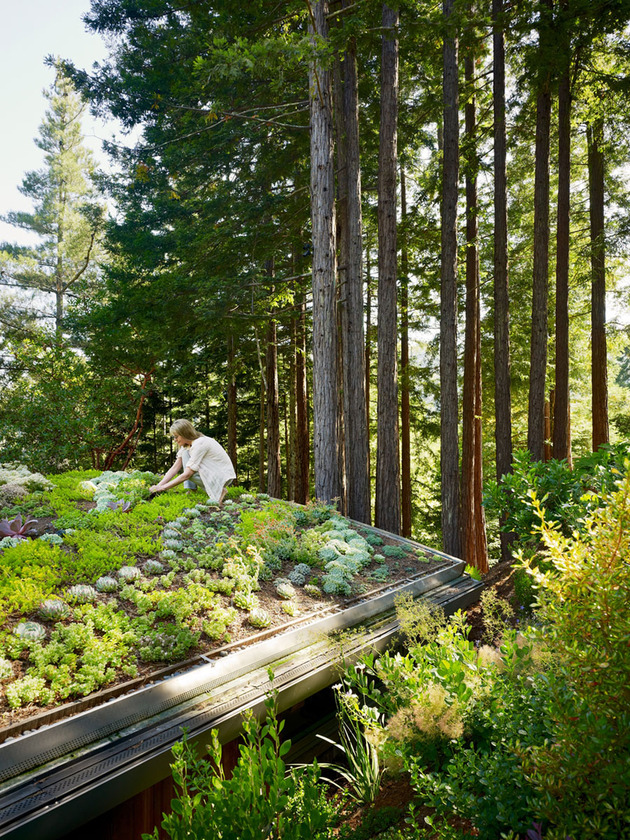 With the multitude of tall trees surrounding the new buildings, the choice of shrubbery had to be carefully planned according to the amount of sunlight verses shadow they would receive during the day. 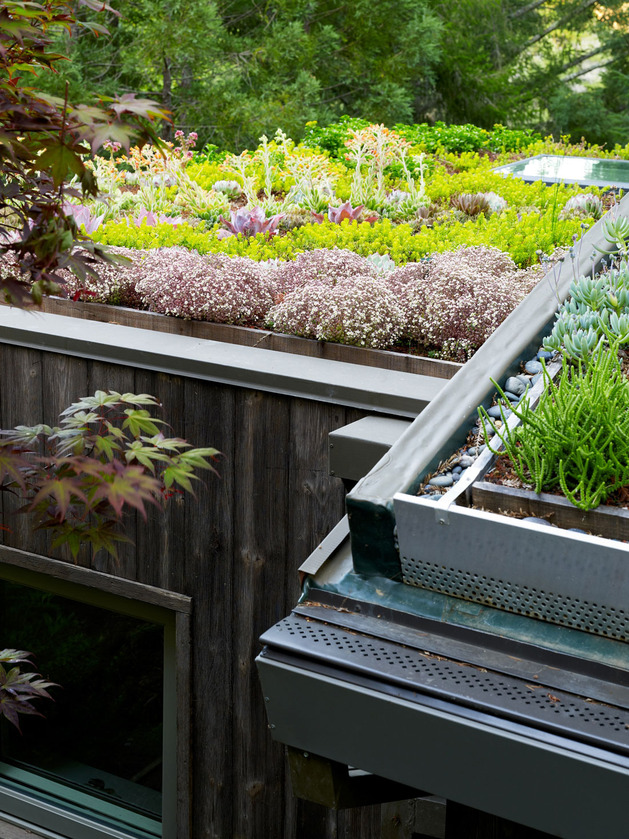 The choice of succulents, herbs and grasses are all drought tolerant and there is a full range of colours with the exception of blues that require full sun. 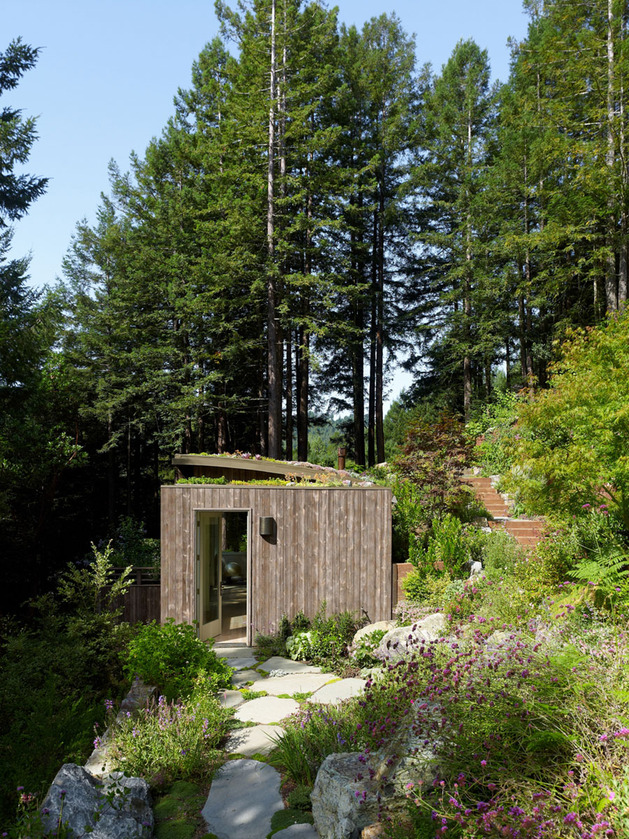 The flagstone pathway continues past and around the guest cabin before arriving at its entrance on the far side. Here, too, low lying shrubs and perennials spill forth, creating a perfect haven for bees and butterflies. 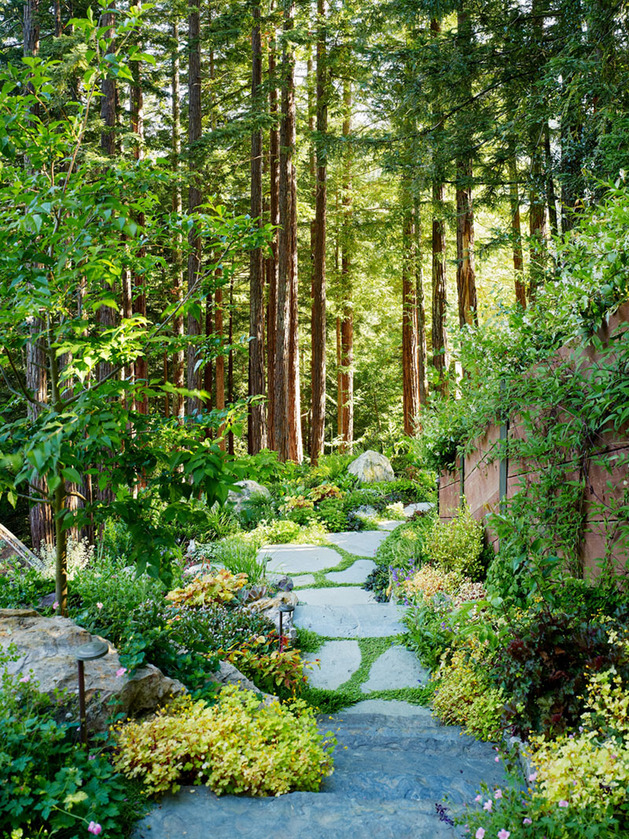 With the homeowner’s love of gardening, and the architects’ skill at creating new spaces that seem to have always been there- including the pathway itself -, the journey from the main house to the art studio and guest cabin is like travelling through an enchanted forest. 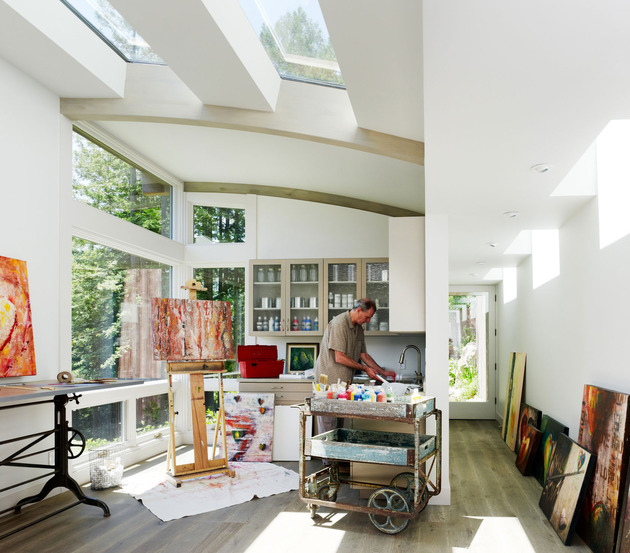 After traveling through an enchanted forest, inspiration is easy to come by and that’s a good thing when the point of destination is an art studio. This studio must be the envy of every artist that sees it with its forest location, wide open interior space and natural light flooding in from every direction. Even the curved ceiling adds a dimension of spherical fluidity, keeping the creative spirit traveling around – but not out of – the room. 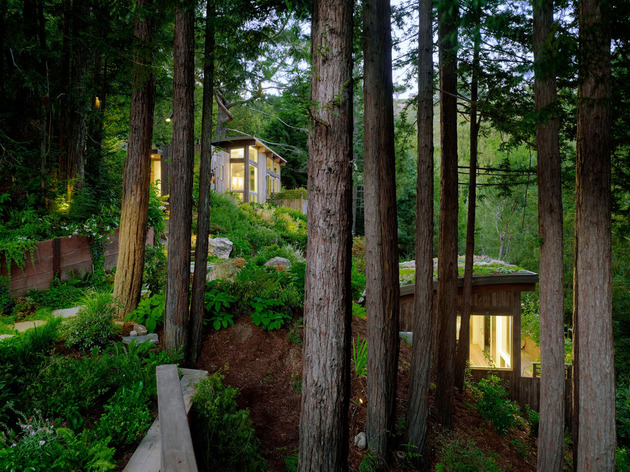 With an artist painting furiously in the studio above, what guest wouldn’t want to stay in the cabin below? It is after all a little piece of paradise tucked into the trees with only the sounds of nature to lull them to sleep.
Feldman Architecture
Photography by Joe Fletcher Photography 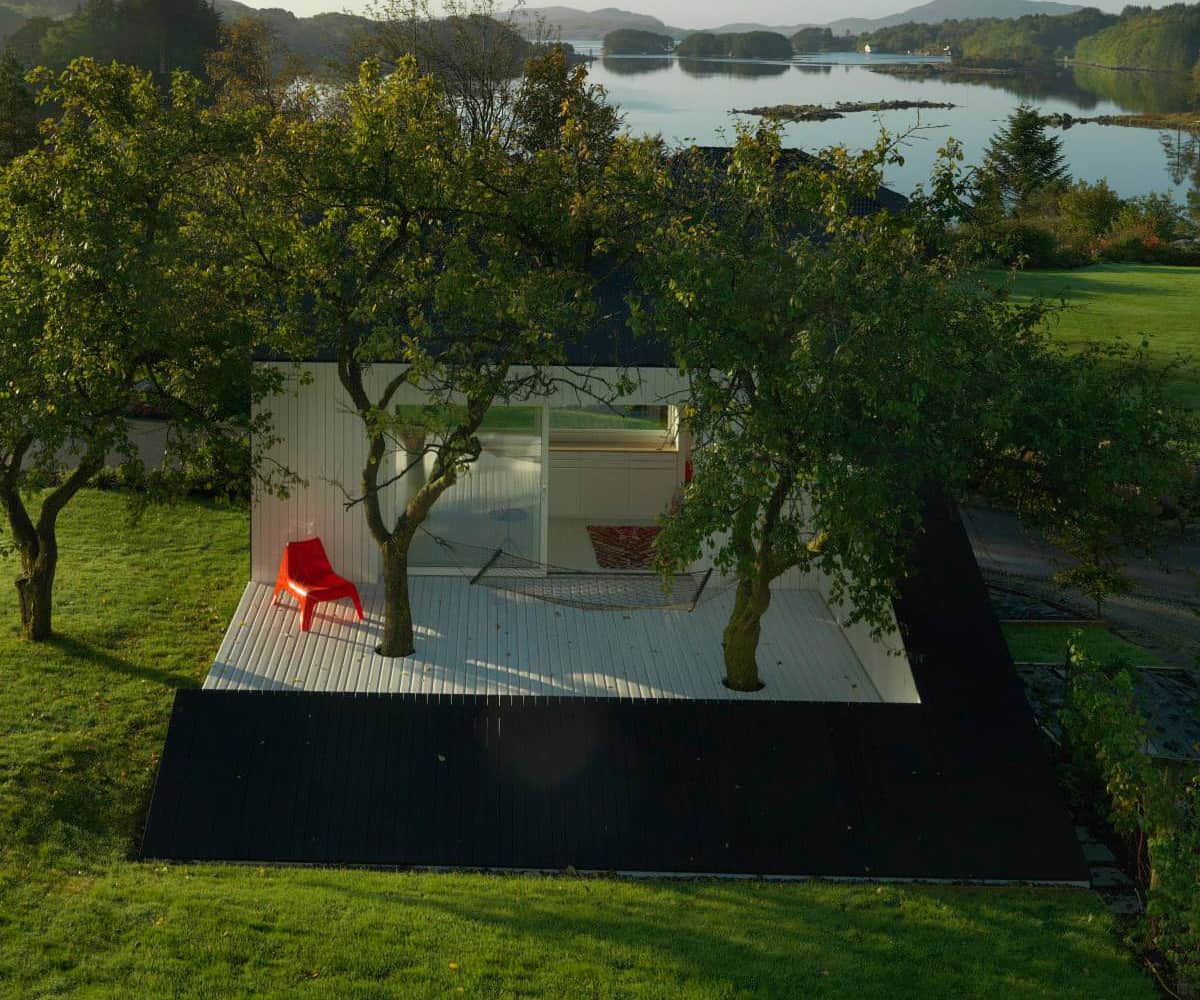 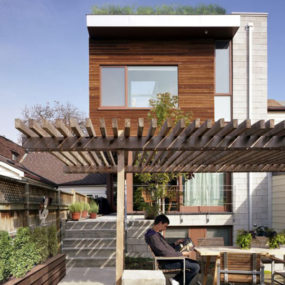 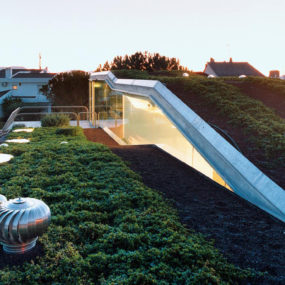 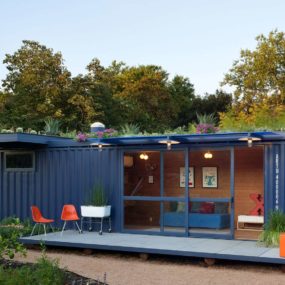 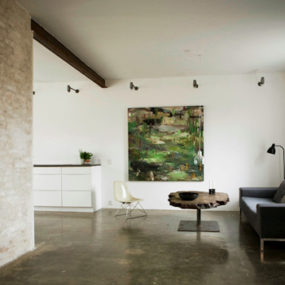 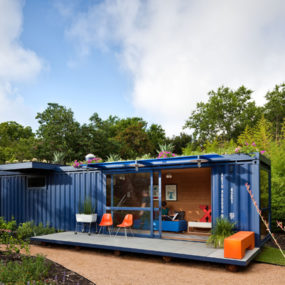