20 Most Unusual Fish Tank Designs for Office and Home

Fish bowls just might be the most popular aquariums out there. They are usually simple but attractive. And their biggest advantage is mobility. But modern fish tank styles and shapes are so varied you can find a special one for any interior. Designers also try to improve aquarium systems to make them low-maintenance to suit with the fast-paced lifestyles of fish owners. And incredible lighting options make the choice even harder.

Designer Haruka Misawa has created a collection of sculptural fish tanks called ‘Waterscapes’ featuring incredible details enclosed into square boxes. One of them even contains an inverted fish bowl. Though only prototypes these modern aquariums would look right at home in the minimal interiors.

Playing with buoyancy of plants the designer adds sparse greenery to accent certain details in these designs. In one fish tank the graphic pizzazz create a maze for fish to travel through.

Speaking of mazes, World Trip is a fish tank design by Takuro Yamamoto that replicates the Earth continents. This creates a relief inside the fish tank allowing the little guys quite literally travel from one continent to another.

Aquariums of old have rarely had architectural details in them. Today you can find a fish bowl with a bit more than nothing inside of it.

Presenting Fishscape Fishbowl by Aruliden. This modern take on a classic fish tank shape has a mountainous bottom relief, which creates an unbelievable look.

It doesn’t require much of additional decoration. Aruliden liked their design so much they even made similar tumblers. Hand-blown glass requires careful handwashing and alas does not ship worldwide.

Bubble Tank by Psalt Design is another great modern take on the fish bowl shape. Each hand-blown ‘bubble’ comes with its own unique form creating a very unusual look.

This one looks like it’s melting and about to slip from the surface it stands on. Red fish tank filler intensifies the unusual impression.

Zooquariums from The Refined Fin are fun animal-shaped fish bowls that come in different colors and shapes. There are two fish shapes, an elephant, a frog, and a cat.

A heart-shaped aquarium is the only non-animal shape and would make a great addition to the office, bedroom, or living room.

These aren’t just cardboard silhouettes though. The animal designs come in a form of a plastic enclosure with a lid. Multiple openings in the lid provide fish with air and allow feeding.

A multi-functional fish tank isn’t something that you can see often. Exception is furniture pieces with the built-in aquariums.

Avo is not exactly a Swiss knife of fish tanks but this little tropical bowl is completely self-sustained. It can clean itself with a specifically developed technology involving a natural bacterial filter system. All you have to do is remember to feed your fish.

System is quite simple, though. Bacteria turns ammonia from the fish poop into nitrate, which in turn feeds the plants that are making water clean and healthy. How about that?

Aqualibrium Garden is a big fish tank that could be used as an aquaponic or a hydroponic system for growing food. The aquaponic one requires fish that supply feed to the plants, which are growing in an aquarium-like container above the real fish tank.

This project by Aqualibrium has met its Kickstarter goal back in 2013, but it seems it’s not available anymore. More and more people are employing aquaponics to grow sustainable natural food and the Aqualibrium Garden seems like a great way to do that in an urban environment.

Though plants are great for keeping the fish tank clean, there is more than one way to combine the two. 5-5 Design Studio have created a collection called ‘O’ ten years ago comprised of glass bubbles that double as vases.

Referencing the water molecules the bubbles are meant to be used as aquariums, vases, and even decanters.

Cp 1 Fishbowl by Chimère is a statement piece. Its tall bell-shaped body rests on a wooden stand with four legs and features a relief protected with a glass dome.

Tailor-made glass and solid oak finishes can be changed upon request. But we guess it won’t alter the futuristic vibe of the piece that makes it look a bit like a spaceship.

Florence Samain and Dave Monfort of The Darwin Sect have also created a futuristic fish tank for jellyfish called The Darwin Tank. Using the laboratory grade glass designers made it into a statement dome-like container that instantly captures attention with its cool lab aesthetic.

Equipped with LED lighting and an external filter it’s a perfect dwelling for jellyfish and a great way to display them.

Mixing birds and fish (or any type of water-living creatures) may not be the best idea if either of their containers are open. But designer Constance Guisset managed to combine the two into an object piece that truly captivates your imagination.

Comprising a tall bird cage and a water container-shaped fish tank the aptly-named design Duplex allows birds to “visit” their water-dwelling neighbors inside the tank.

Beside fish bowls there is a great deal of other aquariums to choose from. Some are more intricate than others, but anyone can find something that suits their interior style.

Umbra‘s Fishhotel is no ordinary fish tank. Dressed in an ABS plastic outer shell the cubic tank features glass ‘windows’ and can be stacked to create a hotel look.

It’s a welcome change from the all glass fish bowls. And stylish white plastic makes for a nice frame creating an accent out of the fish habitat.

Though only a prototype designed in 2008 for Salone del Mobile in Milan, the Infinity shows how different a modern fish tank can look.

If you ever wondered if there was a Scandinavian-style aquarium out there, Norrom could be it. Beside its unique shape it is also the first ever 3D-print compatible aquarium.

Complete with customizable lids its jar-like shape has a functional bubble tube that reduces glare and helps show off colorful fish and plants.

Desktop Fish Tank by Alex was also a Kickstarter project that met its goal 54 times back in 2011 and also won 2011 Best Product of the Year at Global Pet Expo.

Shaped as a clock piece the fish tank is a perfect addition to an office desk or a living room side table. Lit with the color-changing LEDs the aquarium can also make for a great night lamp.

Pulse 80 is another cool futuristic fish tank equipped with the color-changing LED lights. Designed by Cubic Aquarium it is a smaller version in the Pulse series and makes a great fit for consoles and side tables.

Fish tanks are evolving all the time, but even old things can be repurposed as aquariums. Old furniture and even tech can make for a unique and affordable option if you don’t want to splurge on a designer object. The latter though are perfectly suited for offices and minimal homes as well as busy fish enthusiasts who want as little maintenance as possible. 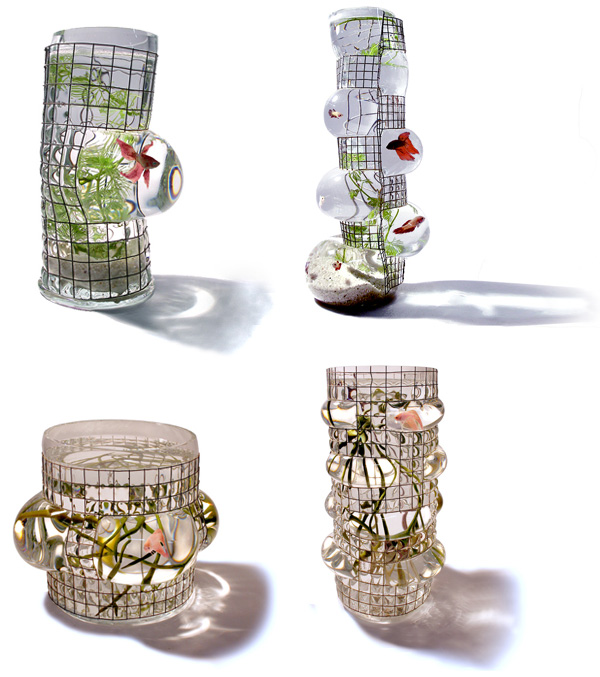 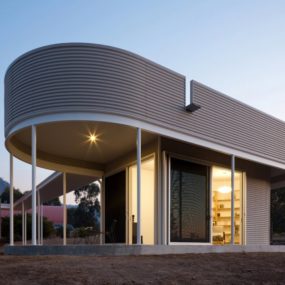 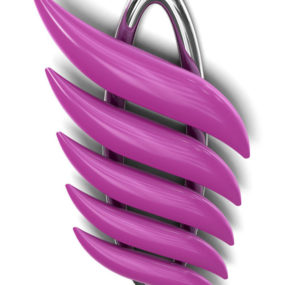 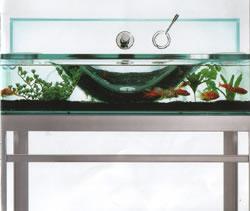 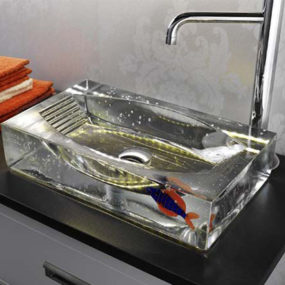