Mexican Home with Serene View of the City 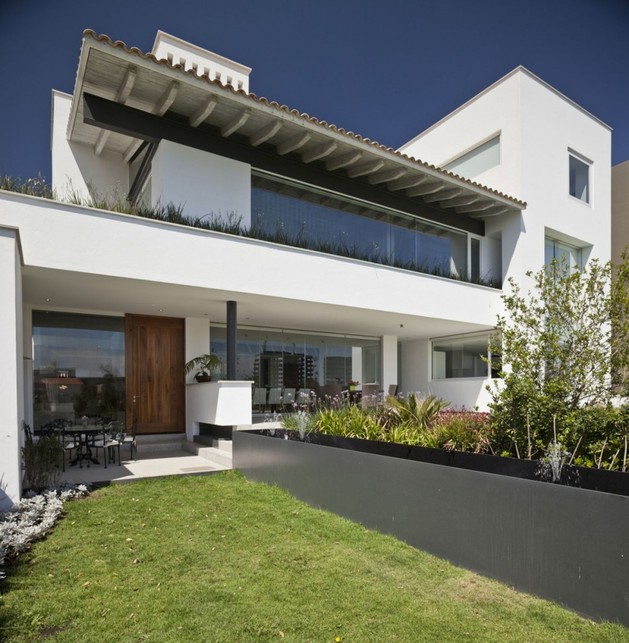 Designed by Almazan Arquitectos Asociados, a firm noted mostly for its work on modern offices, this luxurious modern house in an affluent neighborhood of Mexico City makes use of the relative privacy afforded by a backyard, with nearly every rear surface of the home covered in transparent glass instead of traditional walls. Designed for openness and serenity inside and out, the dwelling includes a few clever design tricks to maximize outside light while maintaining the separation of indoors and outdoors. Additionally, long overhangs of the second floor’s deck and roof help to obscure the view inward while adding functional living space outdoors.
While the exterior architecture of the house is interesting and innovative on its own, its true design frontier is on the interior. The most impressive portion of the abode is a central public space, almost like a park square in form, decorated with a tree and filled with natural light. This square is the connecting point of all the bottom floor’s rooms, with direct access to a large communal living room and dining room. Any activity on the first floor and parts of the second floor can be seen from the room, making the bottom floor of the house an exceptional social point fit for hosting plenty of guests. Beyond such open and public expanses, each private room of the house has notable glass connection to the outside; some of the bedrooms have their own direct access to an outside balcony as well. Combined with a prevalent contrasting white/black color motif, the focus on opening up each room of the house in its own way helps to unite the smallest of bedrooms with the largest living space in the building. 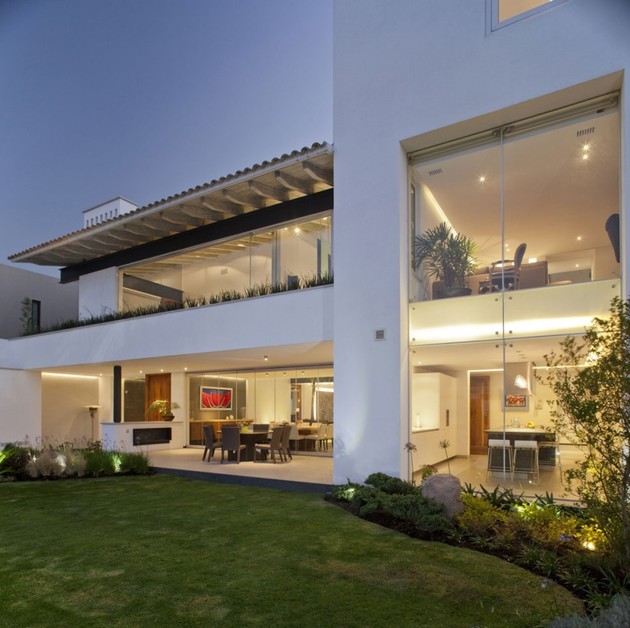 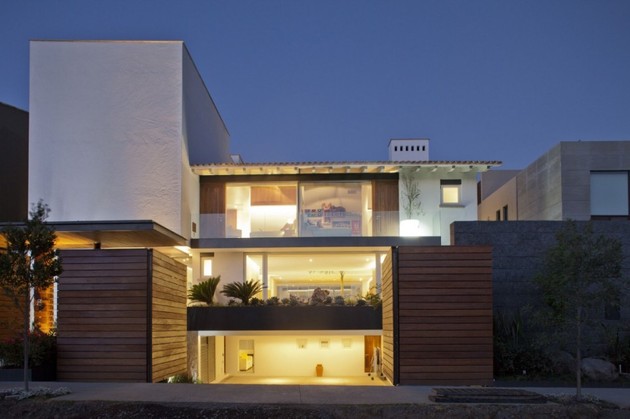 Street side, the profile of the house is more subtle, with electrically-operated wooden gates built into a minimal privacy wall. Glass area is limited on this wall in comparison to the rear, but is still generous. 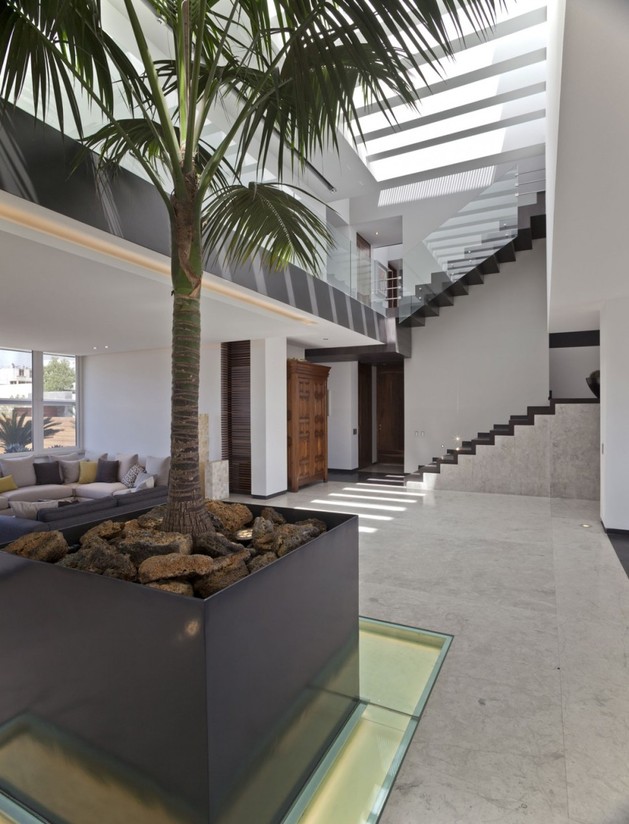 Upon entering the house, its pivotal architectural element is revealed. An immense, uncluttered and wallless bottom-story area takes the place of a traditional transit corridor, connecting each public room with vast grandeur. 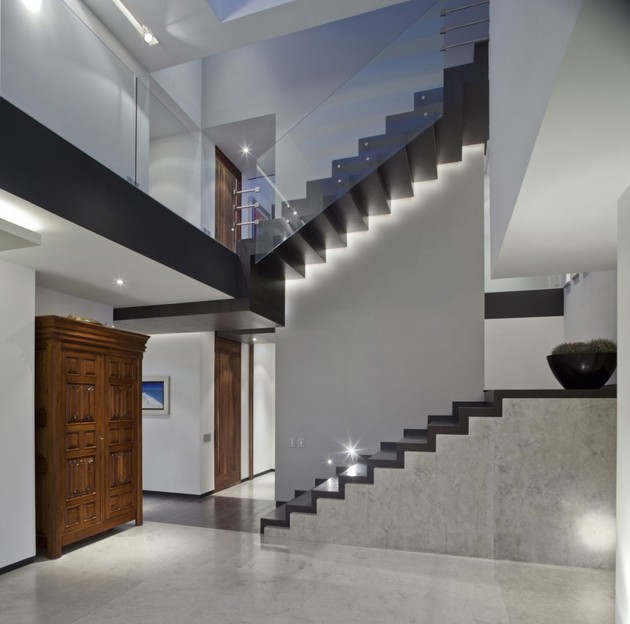 The central public space of the abode reaches a staggering two stories into the sky, with skylights reaching a half story further. Because of this, a full two flights of stairs are accented along one edge of the open room, and second-floor balconies overlook activities on the ground level. 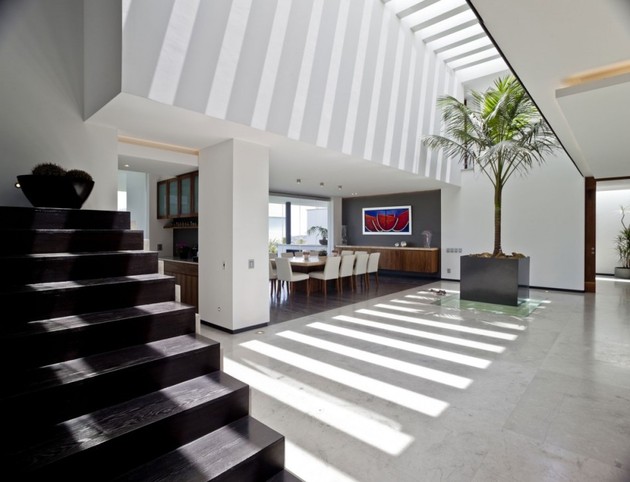 Various rooms on the first floor are distinguished by varying ceiling levels, breaking up the view upward with geometric flair. 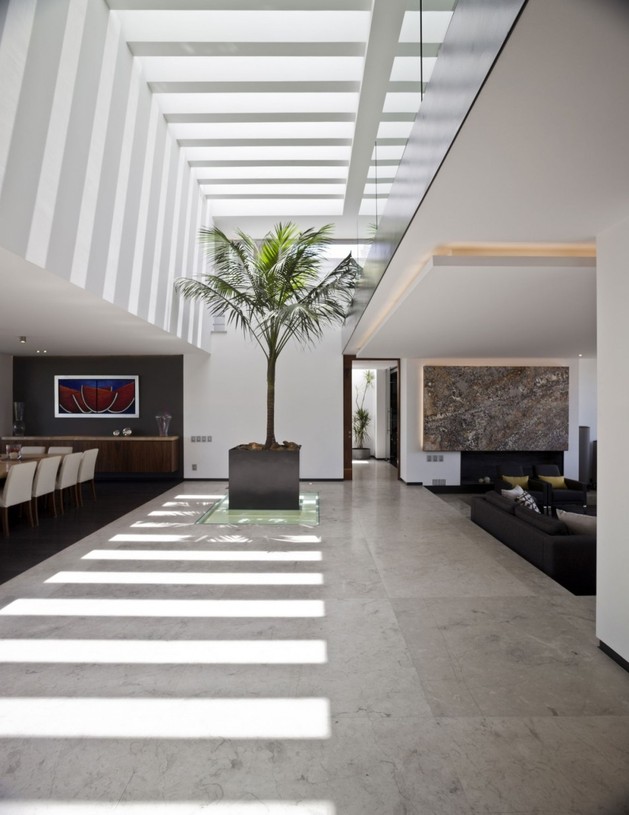 The most seductive feature of this tall common area is a slatted skylight roof, casting brilliant stripes of light and shadow upon otherwise unremarkable white walls while brightening up the entire first and second floor public areas.

A dining room, partitioned by retractable glass panels and a flooring change, drastically lowers the ceiling in comparison to the bottom floor’s transit space, mirrored with a large living room on the other side, creating a sense of closeness among occupants. 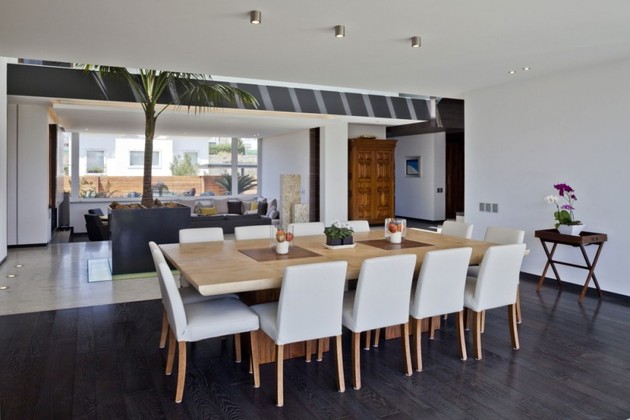 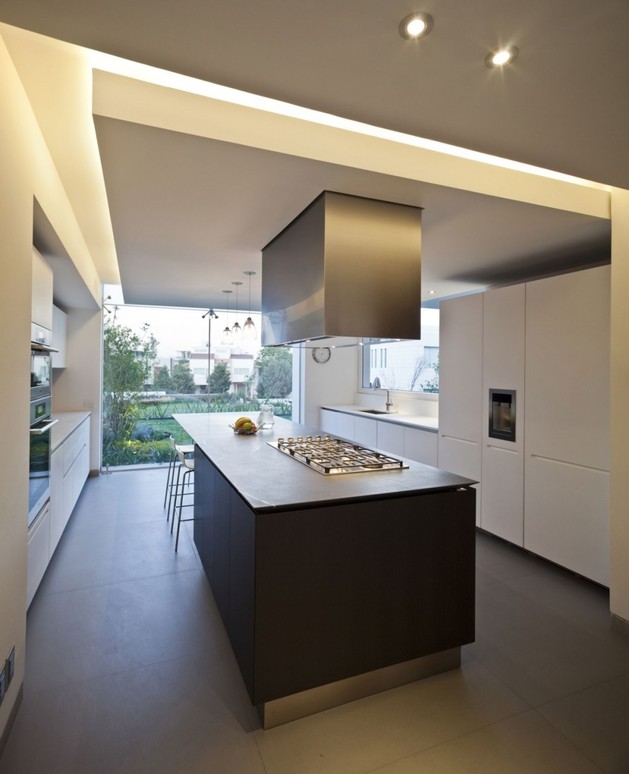 The residence features a kitchen with two longs walls of cabinetry and appliances. Counter space is more than ample for preparing meals of any side, and the island in the room’s middle (darkly colored to define the room’s dimensions) has casual eating space for two with views out a window wall. 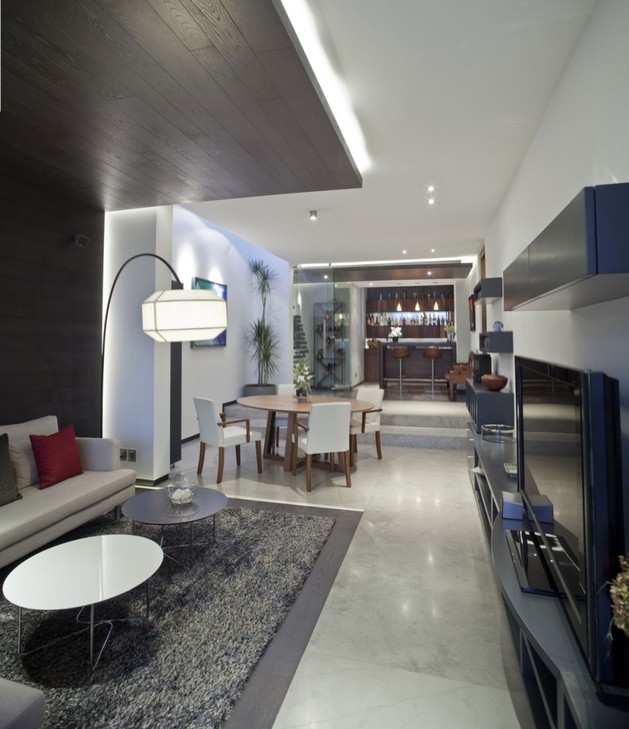 A small living room, off the kitchen, presents a more cozy family-oriented space than the large sitting room in the open area of the house. While the home’s showpiece is its large group-focused central chamber, most of the daily activities of its residents is more likely to occur here. While the flooring here is fairly bright, it’s contrasted by dark wood wall/ceiling paneling and black entertainment center fixtures. 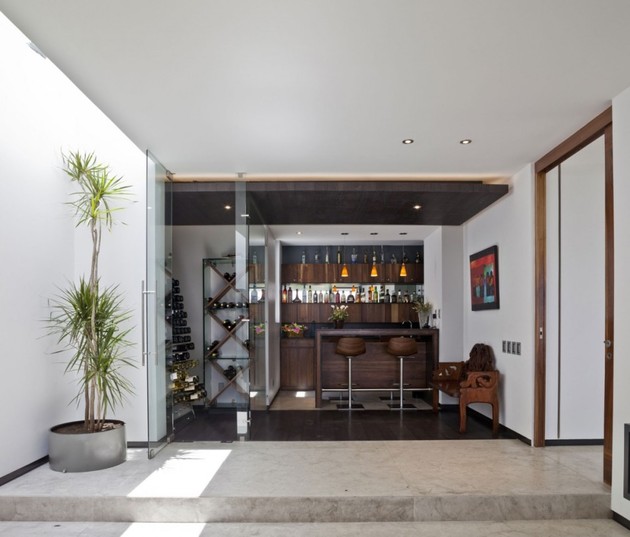 A small, discreet wine bar, optionally enclosed by glass doors similar to those seen near the dining room, makes use of the last section of square footage on the first floor. All the wood in this cubby, from its barstools to the wine racks, is interchangeable in finish. 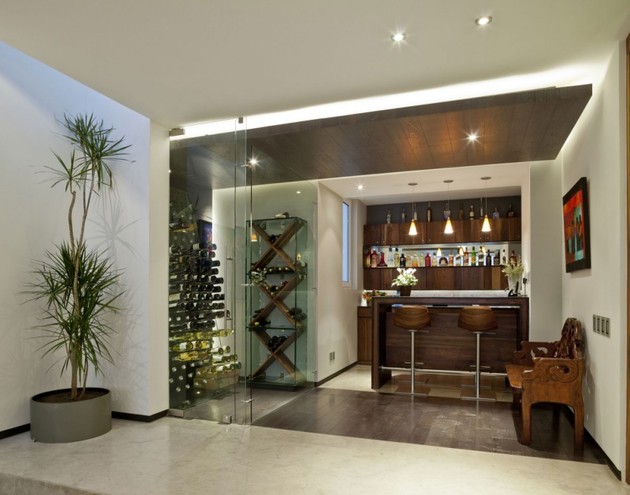 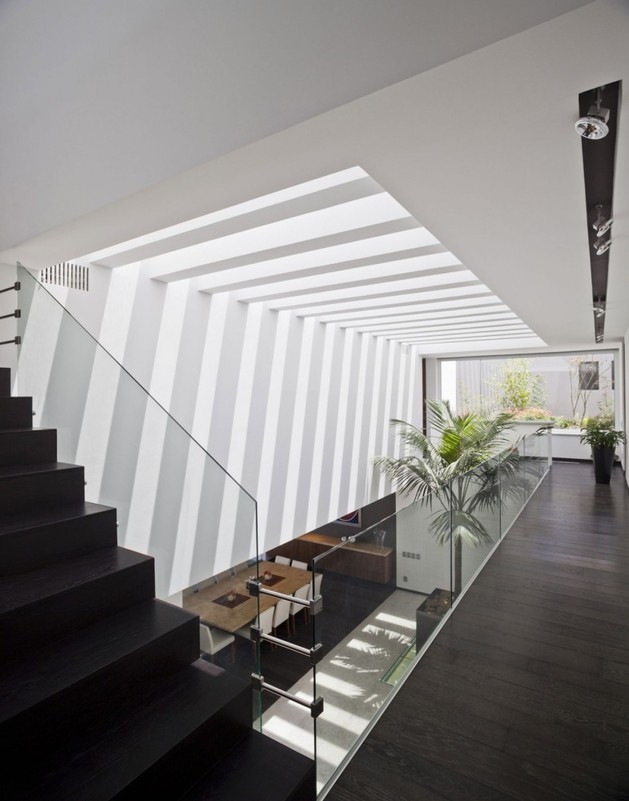 Most of the dwelling’s private spaces are located on the second floor, accompanied by a marked change from the purely open format of the rooms below. 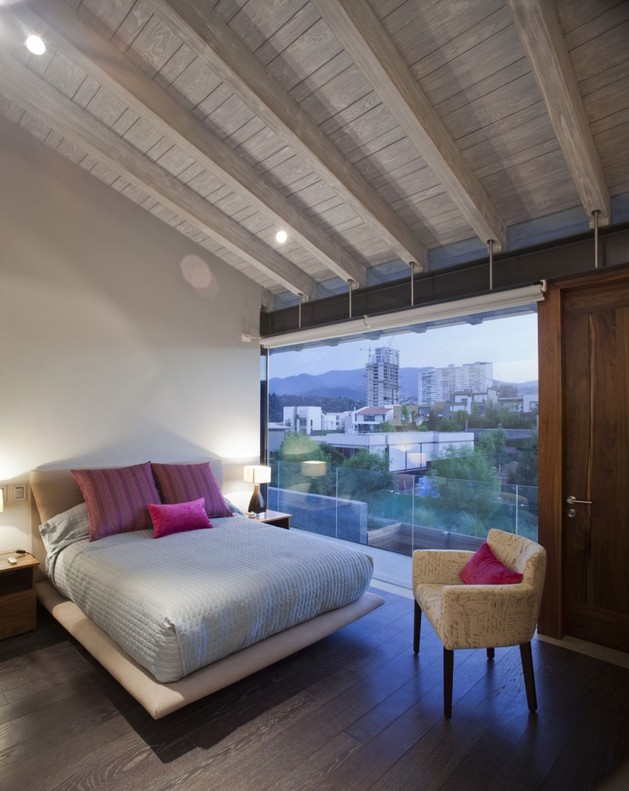 The bedrooms, all situated on the second floor, follow a universal design template, utilizing furniture colors as the differentiator from room to room. All of them feature dark hardwood flooring and doors, contrasted with a sponge-painted white roof finish and significant natural light from large windows. On one side of the house, an outdoor deck runs along the bedrooms. 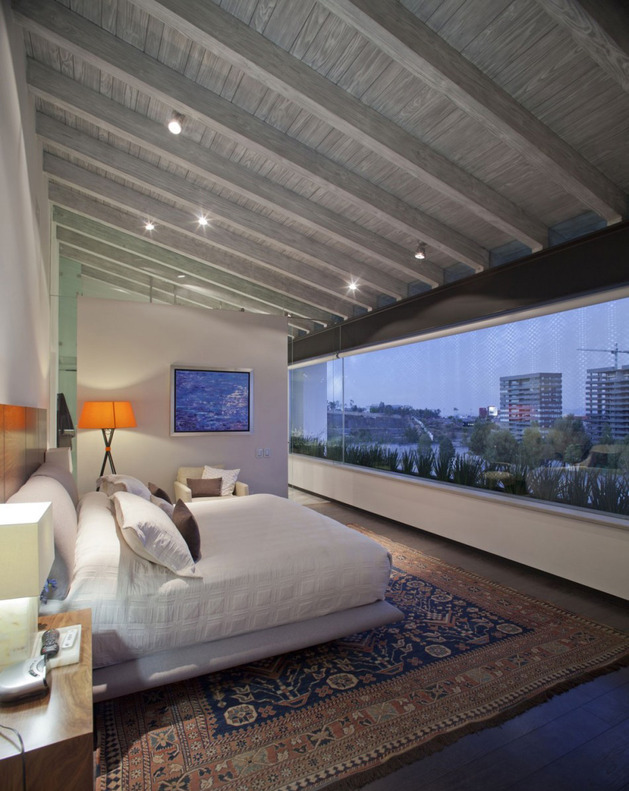 Of all the upper-floor rooms situated under the home’s sloping roof, the master bedroom is the most impressive. It occupies an entire wide corridor taking up one whole side of the floor, with expansive views out an uninterrupted single-sheet window. 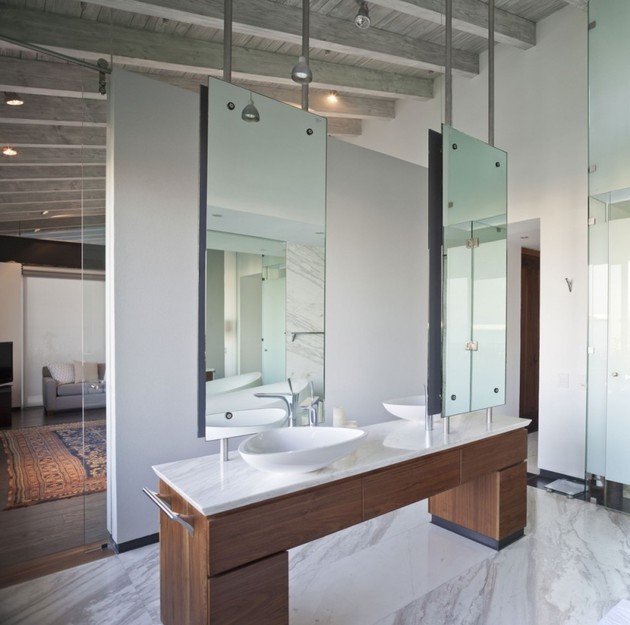 Following a current trend in modern home design and also reflecting the architecture elsewhere inside this house, the master bathroom is not separated from the bedroom by any traditional walls, with half-height paneling and glass entry elements combining with a change in flooring to signal a change in space.
Almazan Arquitectos Asociados 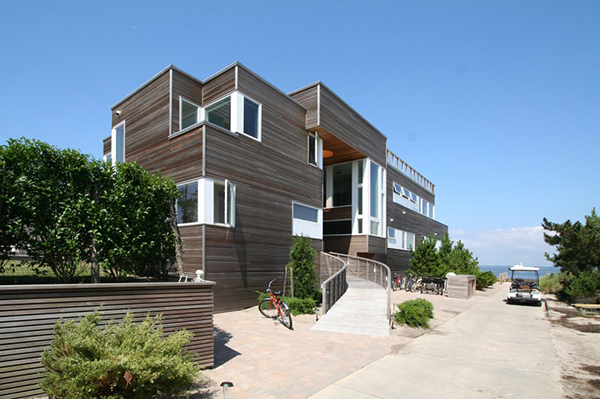 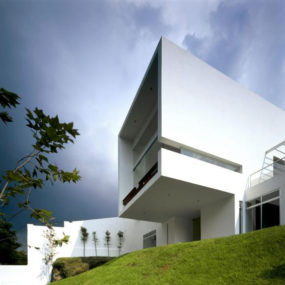 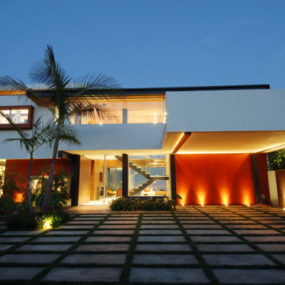 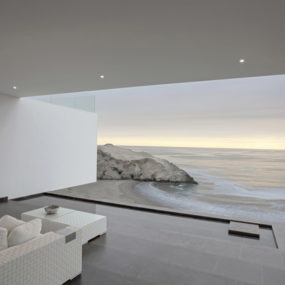 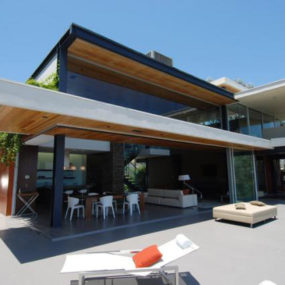