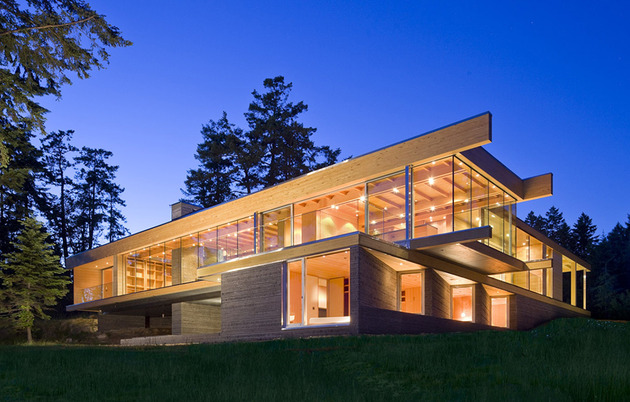 Set on a spectacular forested waterfront lot in the Gulf Islands of British Columbia, this family home by RUFproject uses the natural limitations of a hillside lot to a design advantage. The architecture of the building is based on three different wings and four different key sections, the most public and social of which is suspended in air over a length of the slope with a modern bridge-truss structure. Most of the private rooms of the house are situated on a lower floor on one of the two side wings, with angled window openings that maximize both picturesque views and personal privacy. On the other side of the house, a spacious master suite takes up an entire wing, with larger windows and its own deck. Inside, brightly polished wood takes various forms within the constraints of a single hue, establishing a uniform color palette nearly every area of the home. With its singularly striking design and penchant for interior elegance, this Canadian house is a masterpiece. 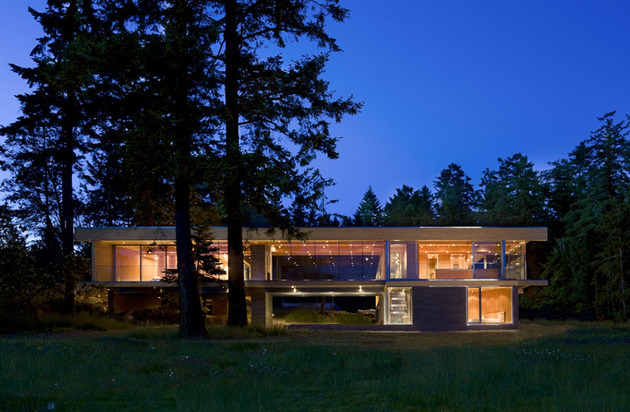 From the water, the home almost resembles a modern interpretation of the grand gates and arches found across European cities. All of its interior spaces are arranged around the unique architecture of the building, with its principal meeting point at the elevated living room. 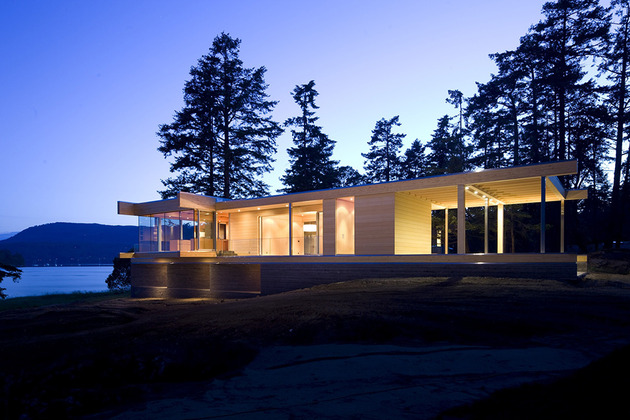 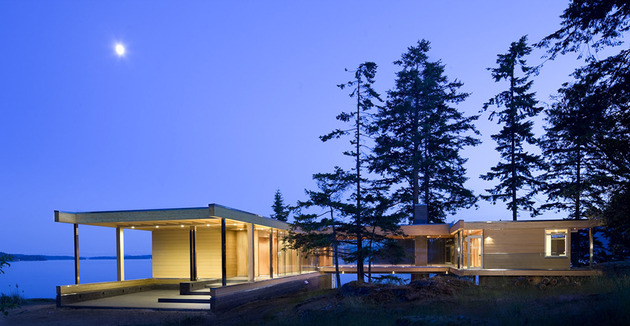 The dwelling looks its most minimal from behind, where only a single story is visible. Here, though, the bridge-like elevated nature of the main wing is perhaps best revealed, the living room floating over the hillside. 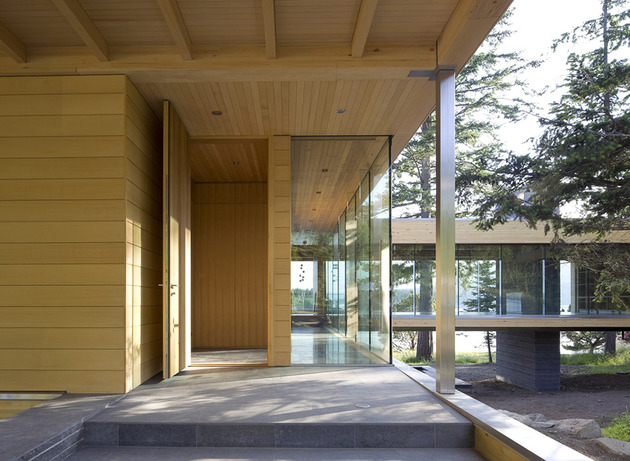 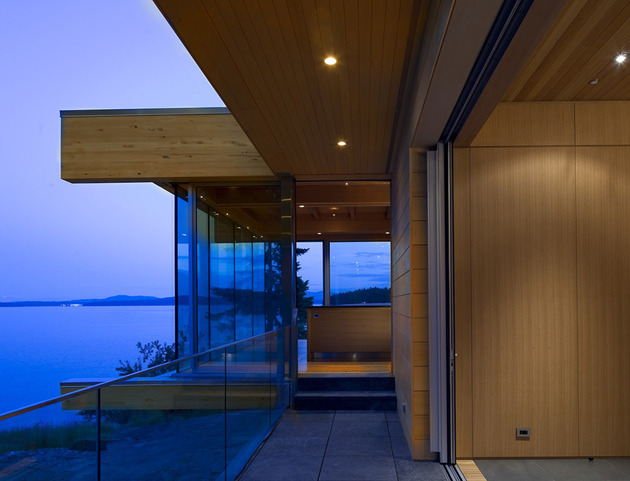 Hefty structural beams and the glass-lined end of living space inside protrude past the edge line of the entrance wing’s outdoor walkway, enhancing the main section’s bridge-like construction.

A sleek patio with glass railings, just off the home’s kitchen, provides some of the most serenely breathtaking views of the water beyond the family’s property. 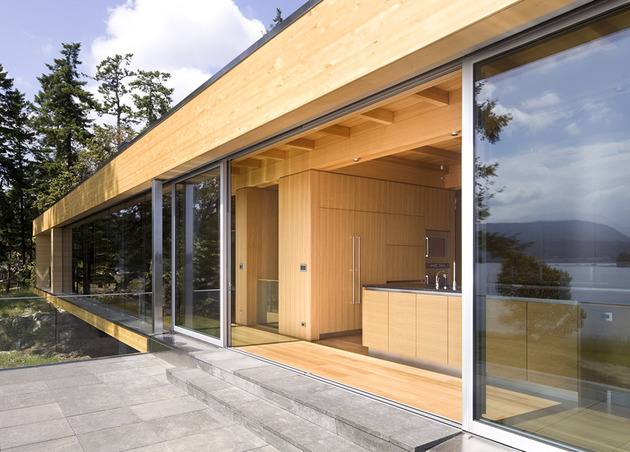 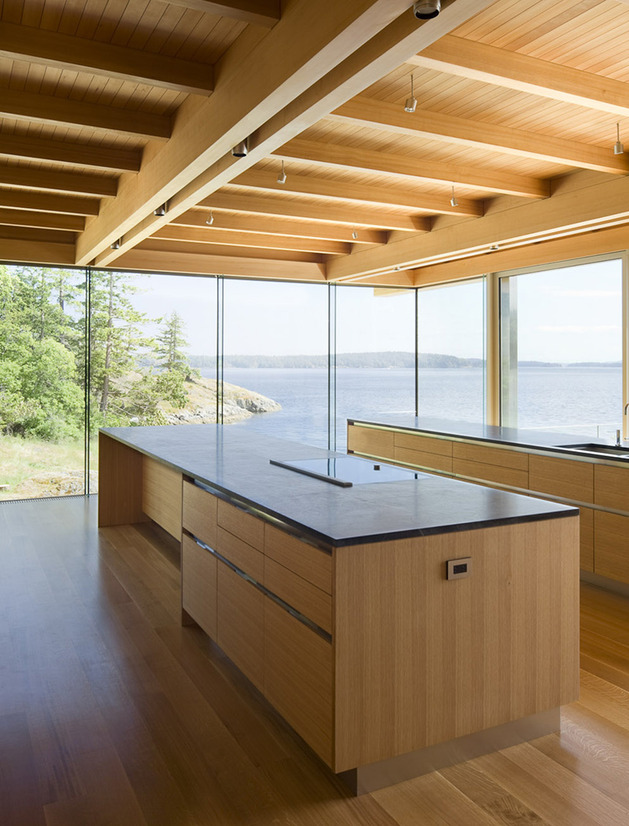 Inside, the residence is almost completely awash in polished wood. As part of an effort to connect the contemporary building to the log-cabin roots of the forests around it, structural beams are kept exposed on the ceiling nearly everywhere in the house.

Throughout, dark-hued stone is used to contrast the mostly uniform wood walls, floors, and ceilings, as well as to provide focal points for each room. 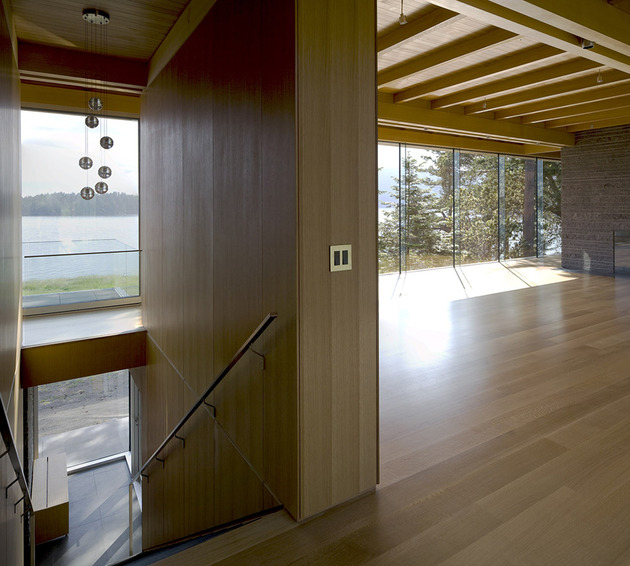 A small staircase leads to the bottom floor the longest side wing, where children’s and guest bedrooms are. 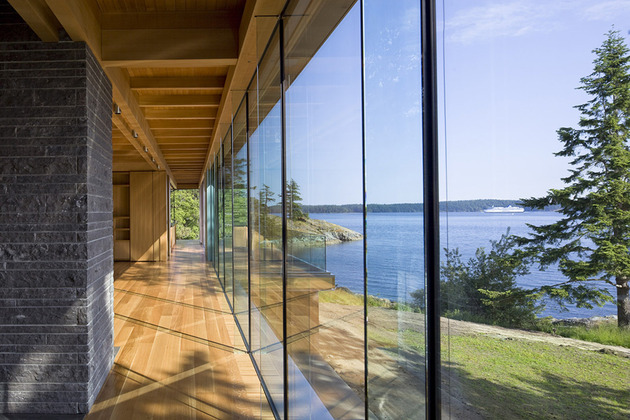 Avoiding the creation of traditional hallways, opening up indoor space, and providing stunning views all at once, the glass window walls of the home are one of its most striking features, extending from floor to ceiling. 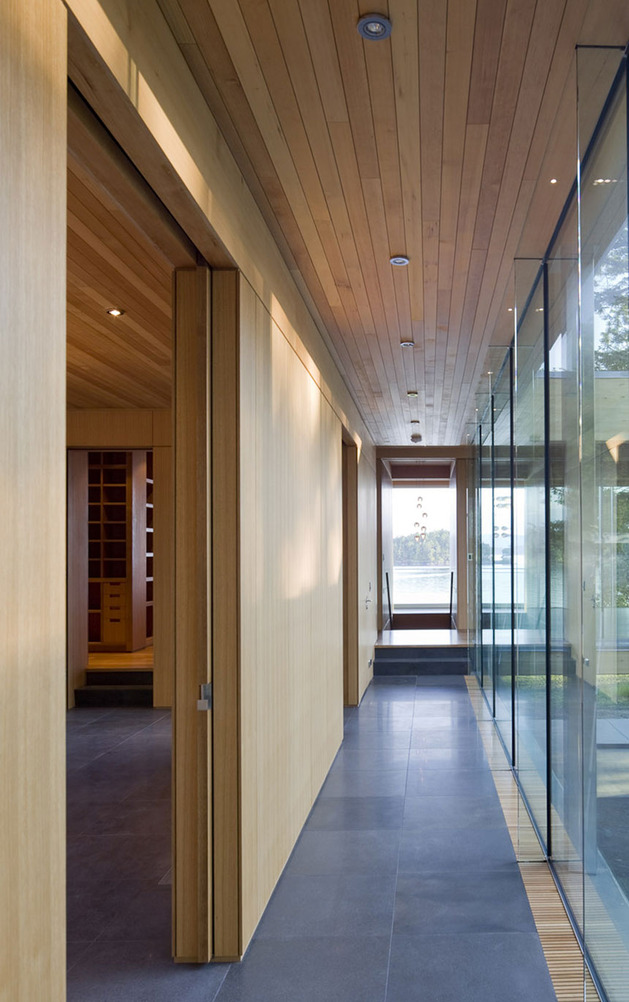 The side of the home with a water view does is not granted exclusive rights to wall-length glass installations. The longer side-facing wing of the home, seen here, has glass walls on either face looking out over the family’s property and courtyard.

Each bedroom of the home has a few unique details which differentiates it, but they all follow the same general decor pattern as the rest of the building, with light-wood surroundings and fixtures. 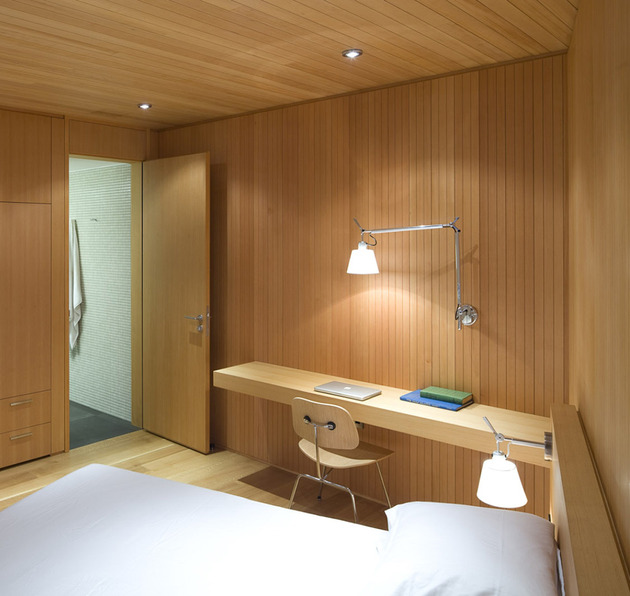 This bedroom is very similar to the first shown, but its study and storage arrangements are personalized to its occupant. Shelving is moved to the wall opposite the bed, and the side wall integrates a desk. 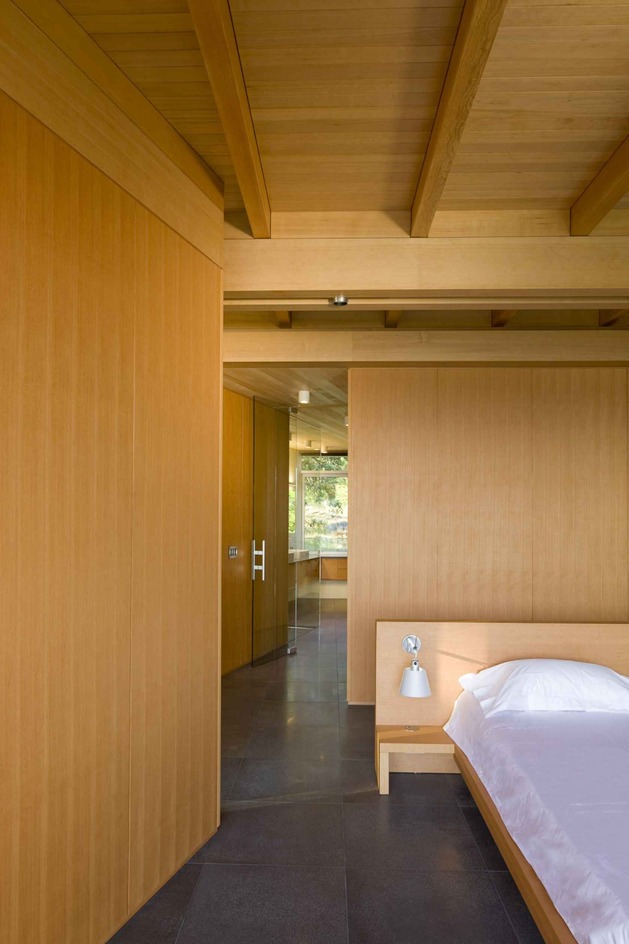 The master bedroom features a single major deviation from the design of the home’s other bedrooms: its floor is tile and is not in the same shade as the walls. This distinctive choice was made to integrate sleeping areas with the master bathroom, combining the two into a single, cohesive suite. 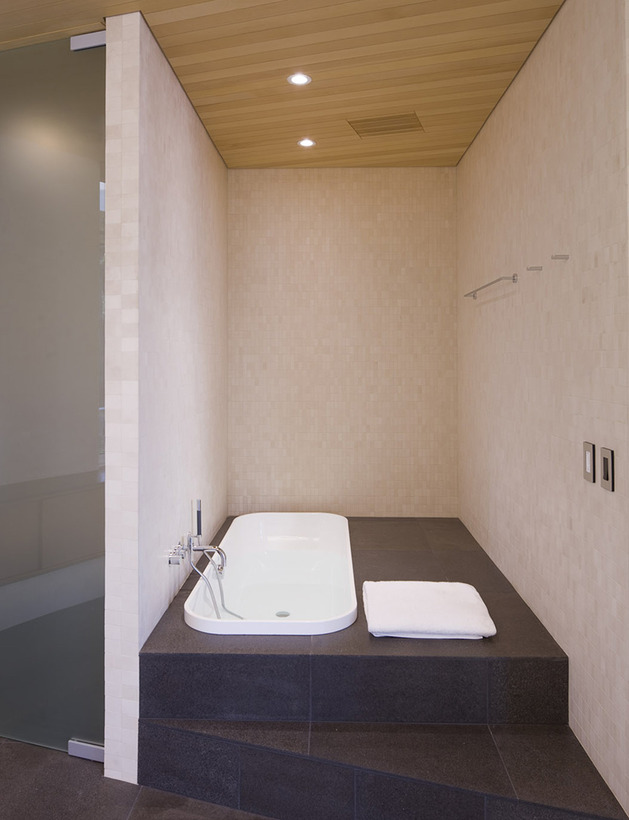 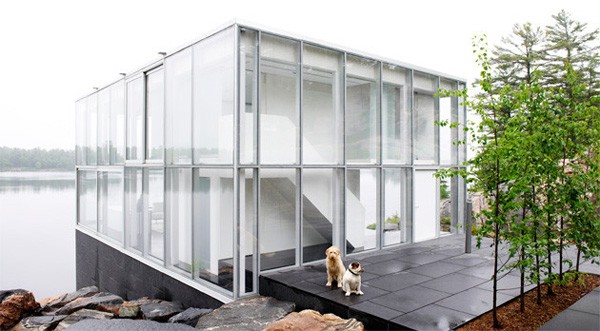 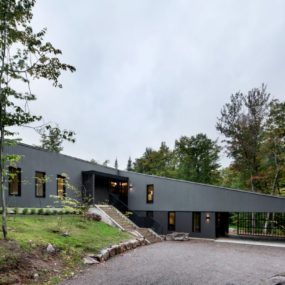 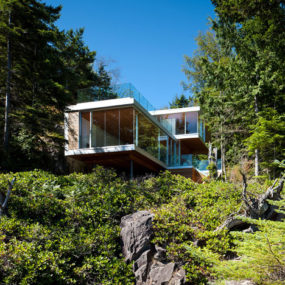 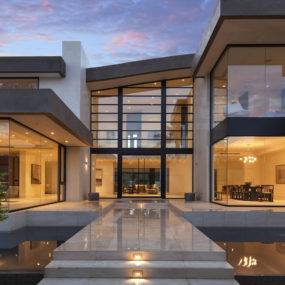 Home with Glass Screen and Water Features in Entry Courtyard

Home with Glass Screen and Water Features in Entry Courtyard