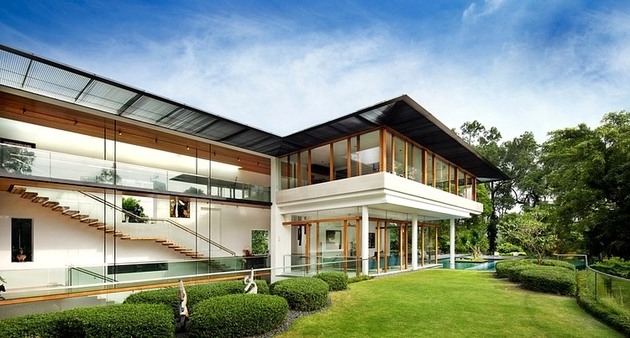 Constructed on a Singapore city lot, this amenity-laden residence is bordered on all sides by other occupied lots. To instill a sense of natural connection and open space, Guz Architects integrated multiple unique design features in its architecture. The house has two rooftop lawns on different floors, providing large outdoor recreation spaces, in addition to a pool area on the middle level. Most strikingly, an entire wall of the house is covered in glass, with no obstructed surface. Light flows in from all directions through this wall and other smaller windows, though most of the largest openings are designed to accept light only at key times of day. The luxurious abode is a stunning example of modern architecture, and an impressive showcase of intelligent solutions to the issues of constrained property space and close neighbors. 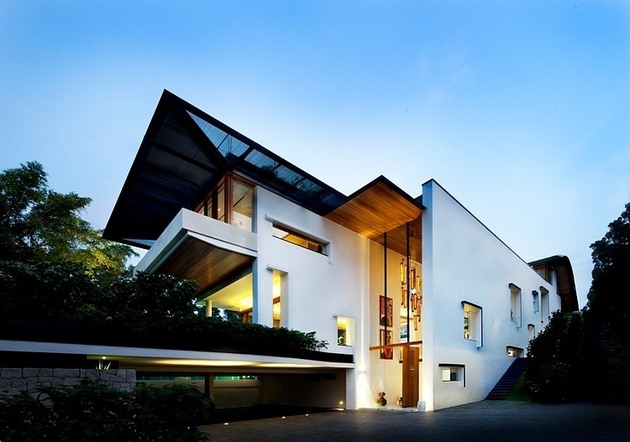 At its entrance, the home towers high above its neighbors, with its three floors populated by vegetation, tall windows, and spacious interior rooms. An array of windows, each with a ridge on two edges to deflect the sun, is spaced semi-randomly to keep from too strictly defining each floor from outside. 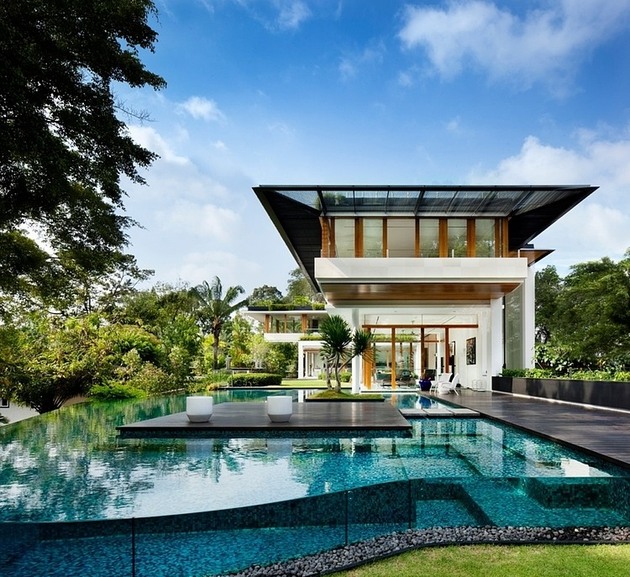 A large pool is set off of one of the dwelling’s living rooms on the middle level, with a small walkout island at its center planted with a single ornamental tree. The borders of the pool are very geometric (in line with the design of the rest of the house), but it minimal enough to appear zen-influenced. 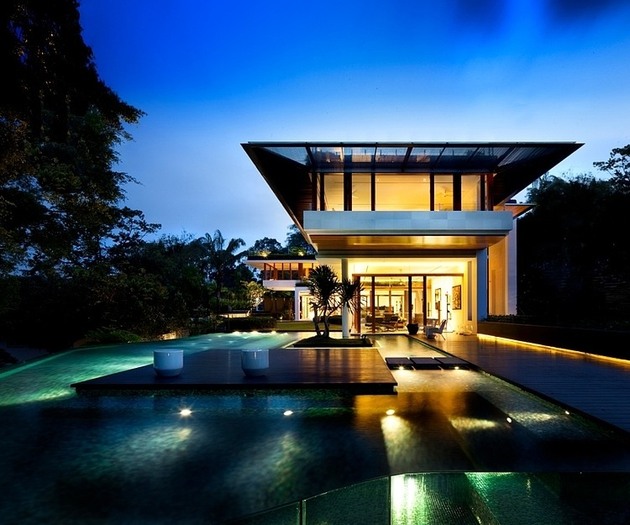 The house is built on a sloping lot, so it appears from certain angles to only be two stories tall in total. The pool and its adjacent lawn are set above the first-floor garage and a living room, respectively, but you could never tell from this side of the building. 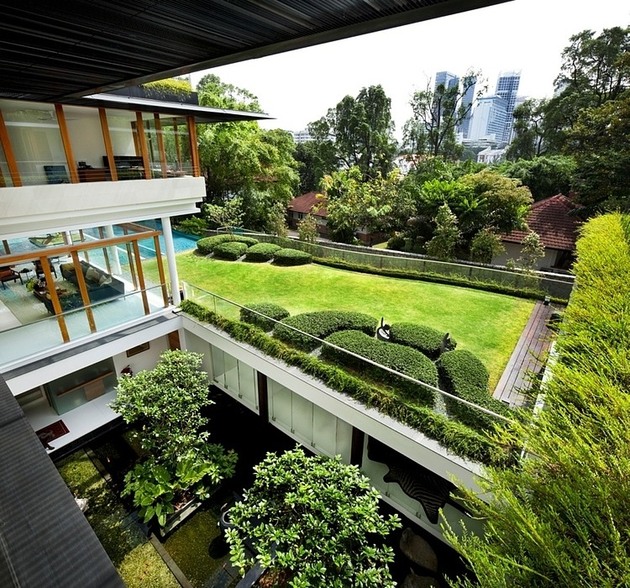 The first and third levels of the luxurious residence don’t waste any space, with fully planted lawns accessible from the main recreational rooms of the dwelling. In a constrained urban lot, the combined square footage of these grassy areas is immense. 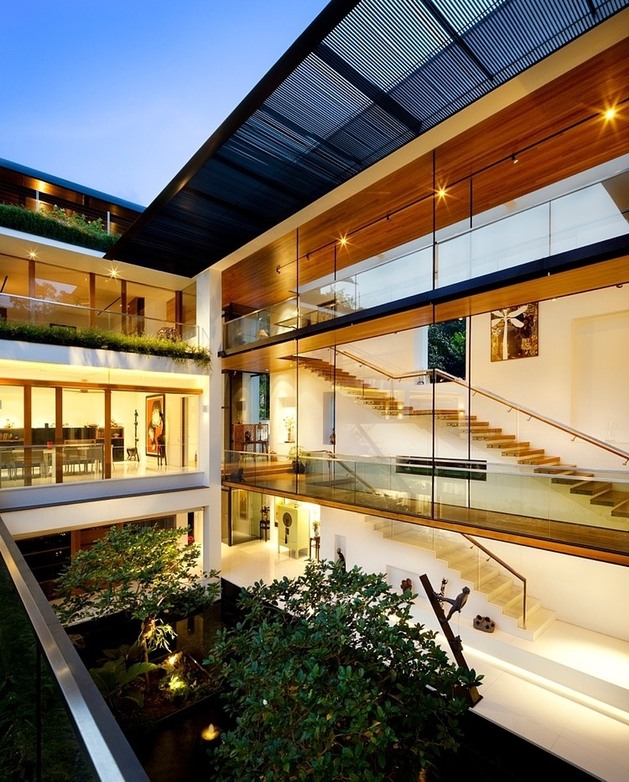 Perhaps the single most impressive aspect of the architecture of this abode is its three story tall banks of uninterrupted windows, set between two perpendicular decks of more traditional window walls. Light streams into the house through these enormous apertures, and the clear sight in and out of them helps to unite every section of the interior, even in distant corners of the building. 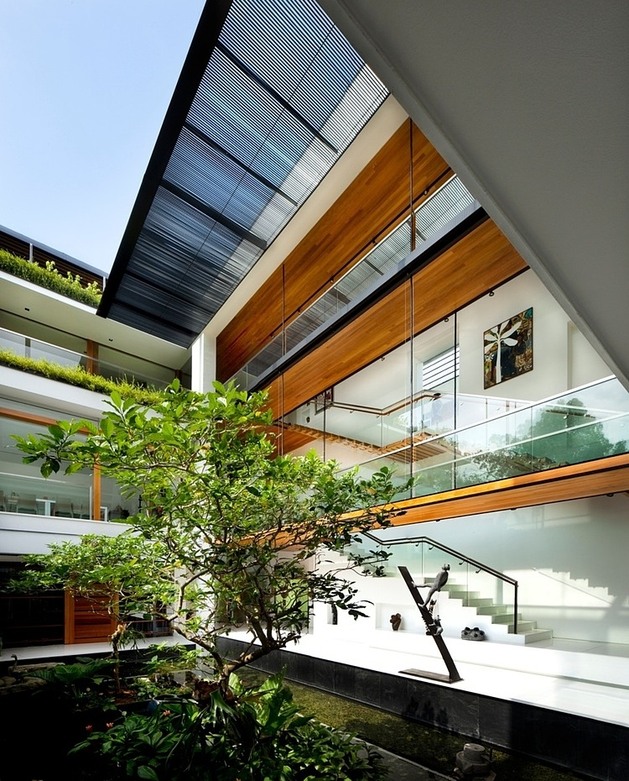 A courtyard on the bottom level forms yet another small outdoor recreational space and serves as the central element of the entire building, around which its largest windows and its rooftop lawns are arranged. The inclusion of this courtyard allows for larger window walls without sacrificing privacy, since those windows take in light from the center of the house instead of beyond its bounds. 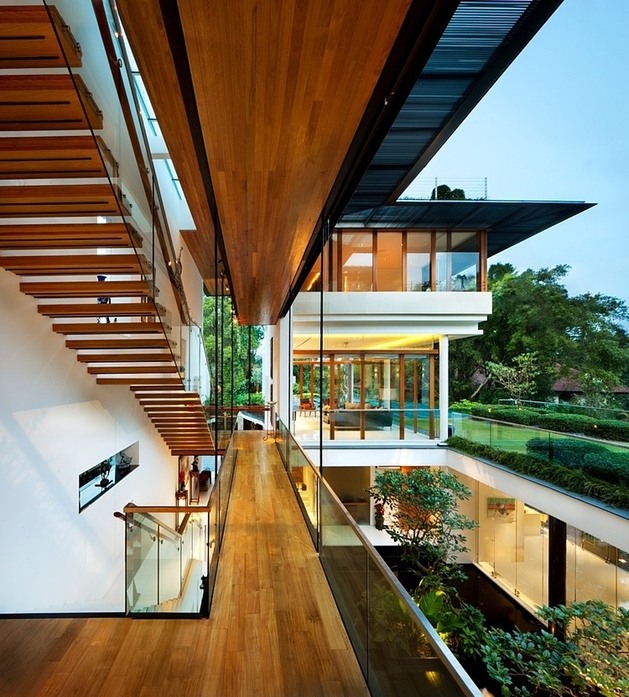 Floating staircases provide transport from floor to floor along the glass-walled inner courtyard facade, with all railings and room barriers finished in glass to open up the space even more. The stairs, floors, and ceilings all share a common polished wood finish, uniting all aspects of the area. 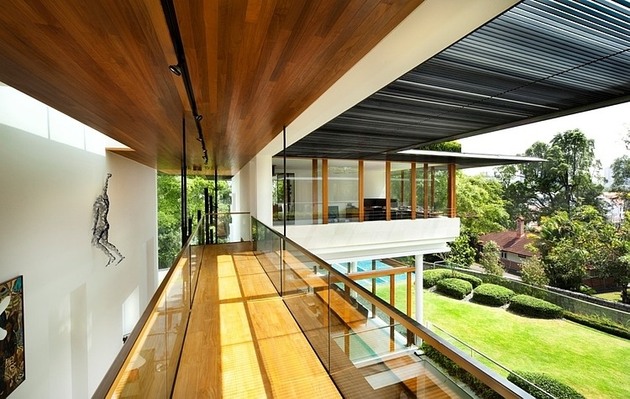 Because the all-glass walls only border hallway areas, privacy isn’t compromised nearly as much as you might expect in Guz Architects’ design. The vegetation and pure bulk of the lower floors also helps to block the view from the single-story homes which surround the dwelling.
Guz Architects 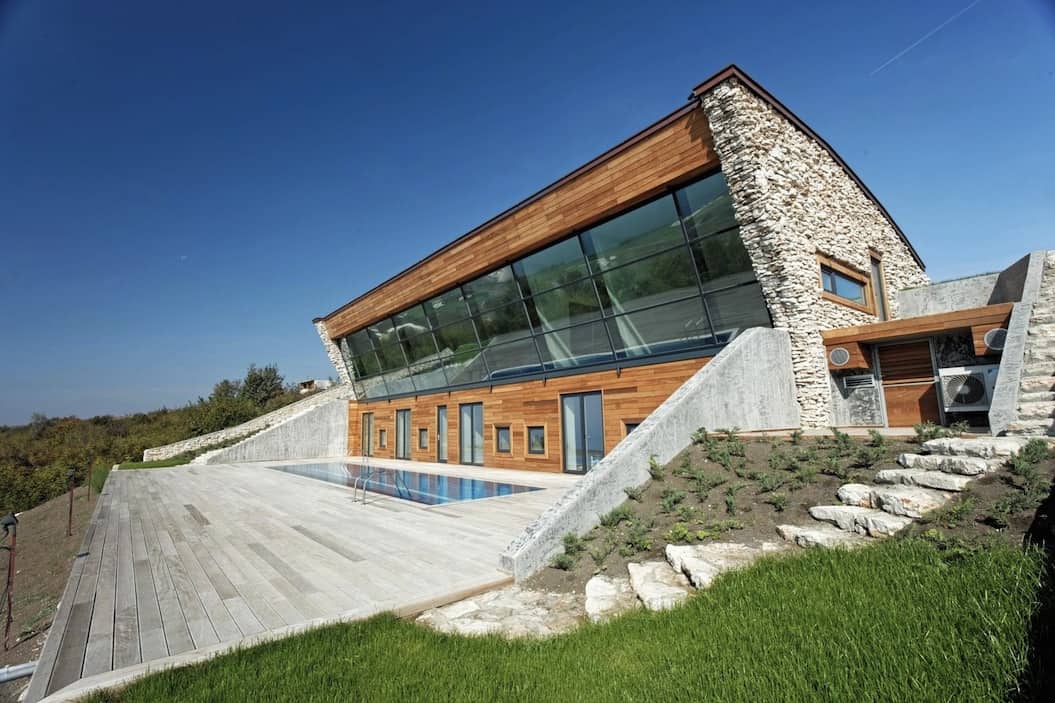 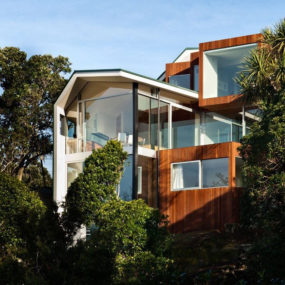 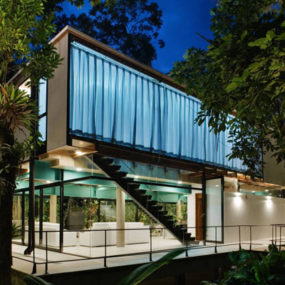