Designed by Nestor Sandbank Architecture, this family home takes an eclectic approach to the organization of its various spaces. While the house as a whole is focused around a large lawn at the rear, its construction actually consists of four separate modules joined by first-floor transit zones. Built in Tel Aviv, the suburban masterpiece features a main wing containing all its main public rooms with a master suite above it, then spreads its three remaining bedrooms into an entirely separate wing. Drawing from the architecture firm’s experience with apartment complexes and other multi-residential properties, each child’s bedroom is nearly autonomous, occupying an almost autonomous freestanding structure. Linked by a single hallway, the three children’s rooms sit in a row perpendicular to the main house, with individualized living space on their first floors and bedrooms above. Every bedroom has its own deck overlooking the lawn as well, including the master bedroom’s large balcony in the main wing. The yard is carefully landscaped and populated with contemporary outdoor furnishings to truly integrate it with the design of the residence, keeping it an essential part of the house’s living space.
Inside, the largely white walls of the dwelling are accented by large works of art and by a nearly opposite dark metal tone used to finish the house’s large main staircase and an indoor balcony above its living room. Each public area is generally lined up with a similar space outside on the pool deck, allowing living and dining to expand outdoors during good weather. Each child’s room has its own decor elements and unique visual cues, giving it an individualized personality. 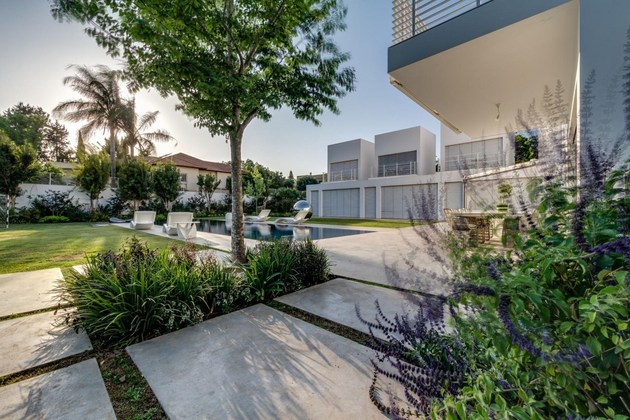 The home’s lawn is spacious and immaculately landscaped, with wide concrete slab pathways framing rectangular garden plots and various outdoor amenities. Most of the home is focused on this impressive outdoor space, where much of its social activities take place. 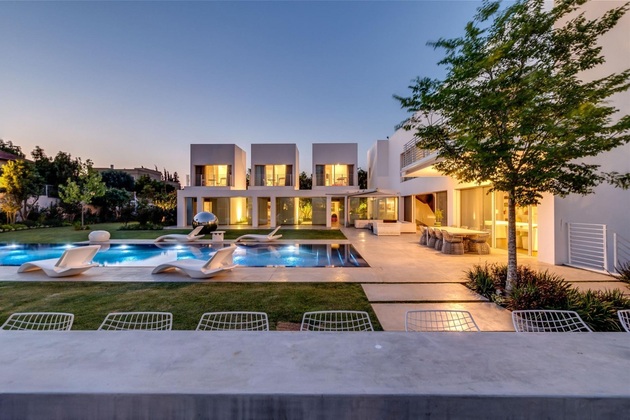 Along one edge of the property, a long stone bar provides a dining and drinking place for more than half a dozen residents and guests, while further back on the concrete a more formal outdoor dining table provides an alternate eating space.

The house is composed of two stories above ground and one below, with individualized amenities for each occupant. The smaller of its two wings features three completely separate private bedroom suites for the family’s three children, each with its own deck overlooking the pool below. 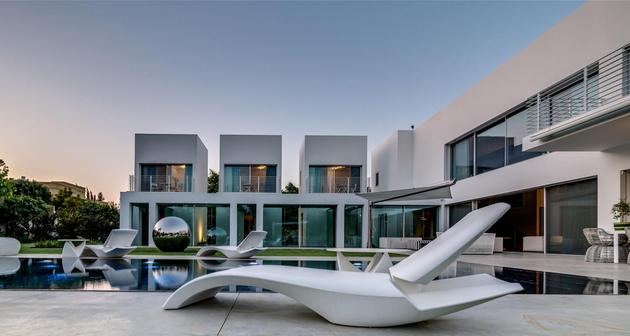 At the water’s edge, the patio is dotted with ultramodern lounge chairs and matching tables which exhibit the same hue as the house as a whole. Near the children’s bedrooms, a large mirror-finished orb is a sculptural additional feature of the lawn. Each facet of the residence’s outdoor space is designed to extend the elegant modern style of the building outward. 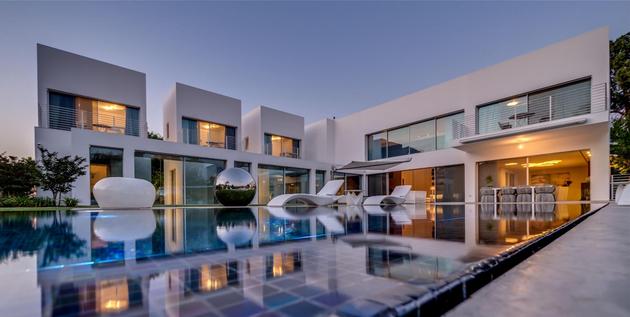 The pool, like many contemporary landscape features, is designed for the water it contains to sit at the same level as the deck and lawn around it, draining into small cracks along each edge. On the side near the children’s bedrooms, an additional modern sculpture (this one white and irregularly shaped) doubles as a bench.

Near the pool’s end, the lawn drops off abruptly, and the concrete frame of the water ceases, creating an infinity edge and a smaller, lowered reflecting pool as an extension of the swimming space. During the day, vertically-operated shades can be used on all the windows of the house to keep the afternoon sun and neighbors’ eyes out. 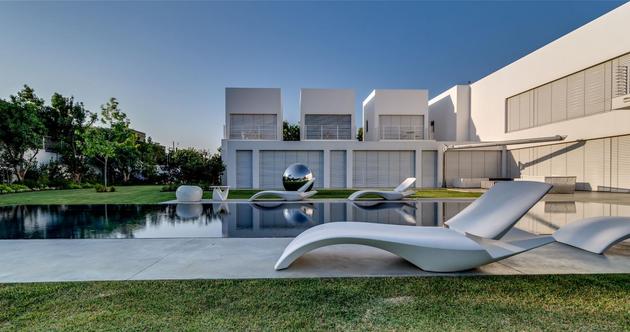 Though its rooms are focused around the lawn, the house must function on its own as well for days that outdoor access isn’t available. Inside, spacious pathways have been created to connect the main portion of the dwelling with its three semi-independent satellite structures.

In addition to each children’s room having its own balcony, the master bedroom has its own spacious raised deck at the corner of the main wing, built with a strategic view of all the smaller bedrooms of the house and the living spaces on the level below. 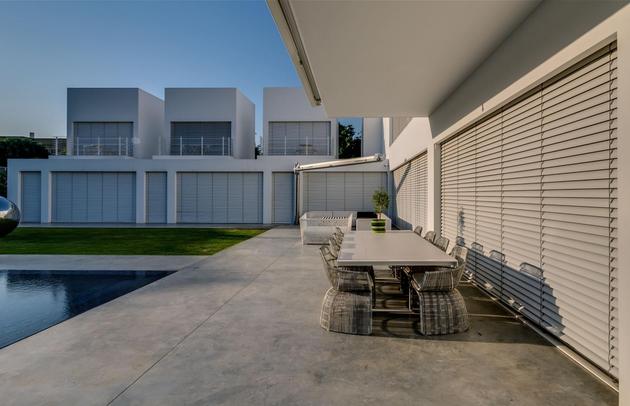 Beneath the master bedroom’s balcony, the house’s most formal outdoor dining space features an eight-person configuration made with furniture that is contemporary without being impractical. Beyond, a chic outdoor living area occupies the shady spot between the home’s two wings and under a canvas awning. 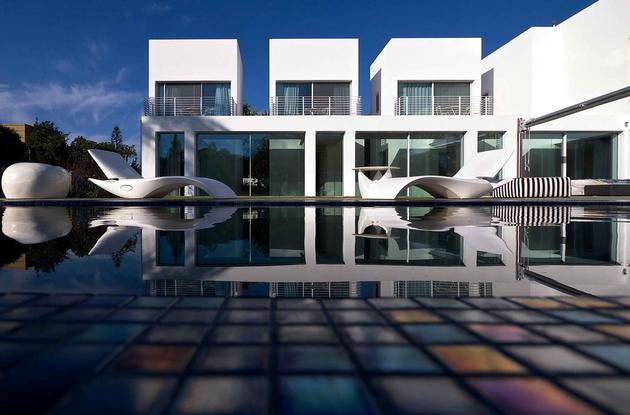 Though they have a single first-floor facade stretching across them to provide indoor passage between each space, the three children’s bedrooms are standalone structures, each identical architecturally but open to the personality of each individual in decor. If the passageway were to be removed, they would each stand as compact personal towers, holding the children’s bedrooms, recreational space, and storage. 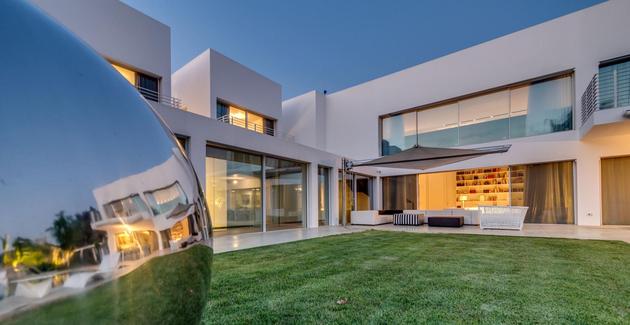 A number of the house’s large window banks include wide sliding glass doors, allowing its main rooms to open up and combine with the lawn for larger, more airy entertaining spaces than are built into the floorplan alone. 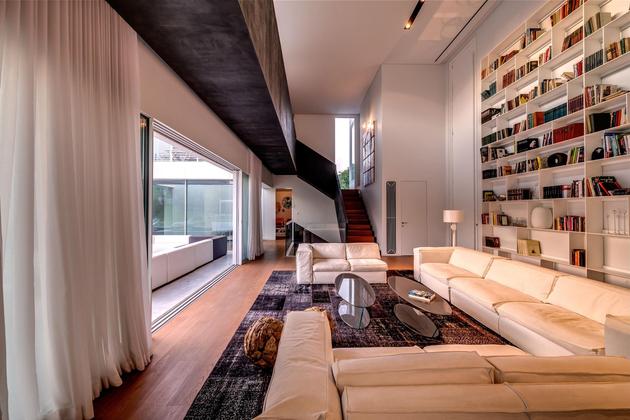 The principal living room of the house is dominated by two elements: a vast open array of bookshelves and a balcony overhead characterized by its dark beaten metal finish. The room is two full stories tall, allowing light in from the bank of windows on the main floor in addition to a set above and smaller openings on the far edge. 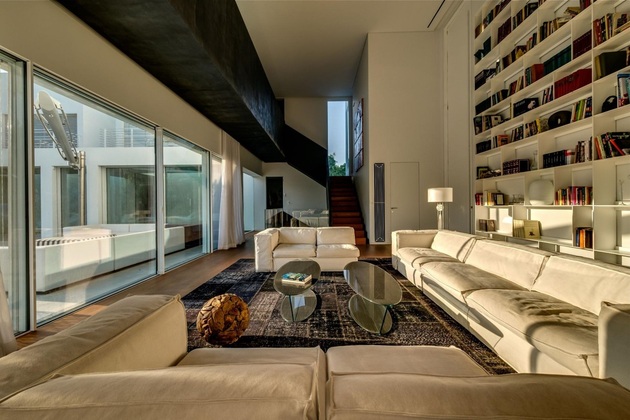 The main seating area is set apart from the rest of the long space it occupies by the installation of a large rectangular rug underfoot, giving it a more comfortable atmosphere than the wood floors around it. Its furnishings combine midcentury sculpture with contemporary design, coming off as both comfortable yet undeniably modern. 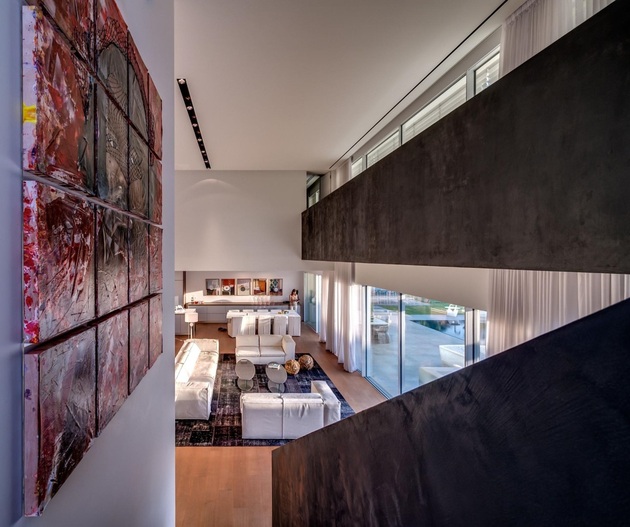 At the edge of the room, the balcony’s metal hues extend downward in the form of a bold staircase, with blank wallspace at its side covered by intriguing contemporary art. On the opposite end, a kitchen and dining area is set off from the living room by its placement in an area of the space limited to a single story in height. 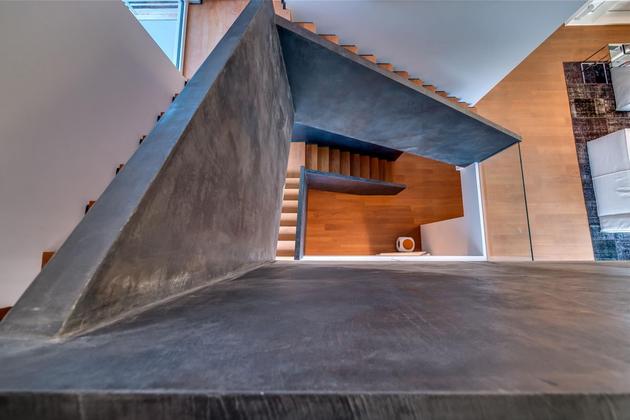 This main staircase extends further downward as well towards the basement, each flight descending half a level further. The staircase carries over the same wood flooring that dominates all over the house. 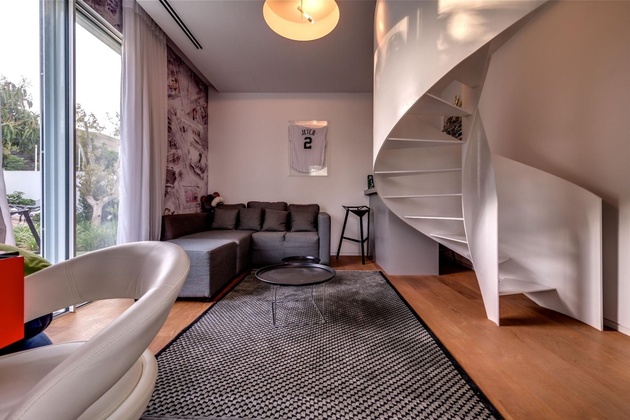 On the lower level of one of the children’s independent structures, a chic and energetic living space is furnished and decorated with the personality of one individual in mind. A sleek spiral staircase to the bedroom above. 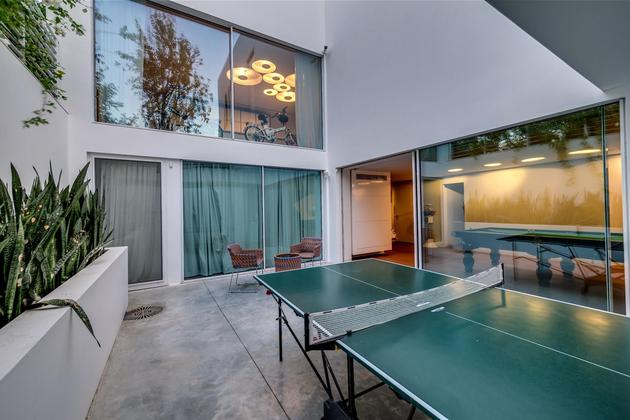 Not all of the house’s outdoor recreation spaces are situated in the lawn between the two wings. Here, the floor space for a game room is expanded outward onto a deck next to the first child’s room.
Nestor Sandbank Architecture 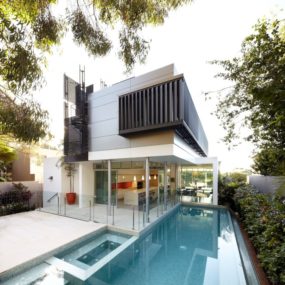 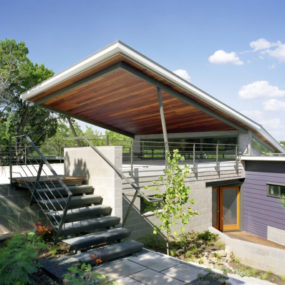 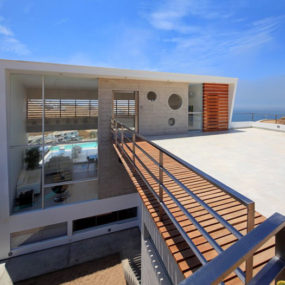 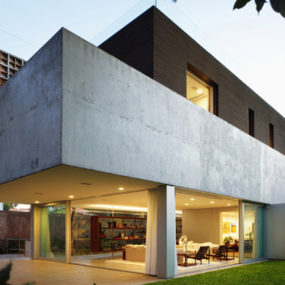