When a couple first moves into an apartment, condominium or loft there always seems to be plenty of space, but as couples turn into families and children begin to grow up, that large amount of space disappears and slowly becomes cramped. While moving into a larger home would solve this dilemma, many people don’t want to leave their locale due to its proximity to work and/or their friends. This was the dilemma facing a couple who had originally hired CHA:COL to renovate their loft to maximize the pre-existing area. After all the plans where drawn up and ready for building permits the loft next door went up for sale. Realizing the huge amount of space both for living and entertaining that would be available if the two side by side loft’s became integrated into one, the owner’s immediately purchased it and the architects went back to the drawing board with this now completely different and yet completely the same project. 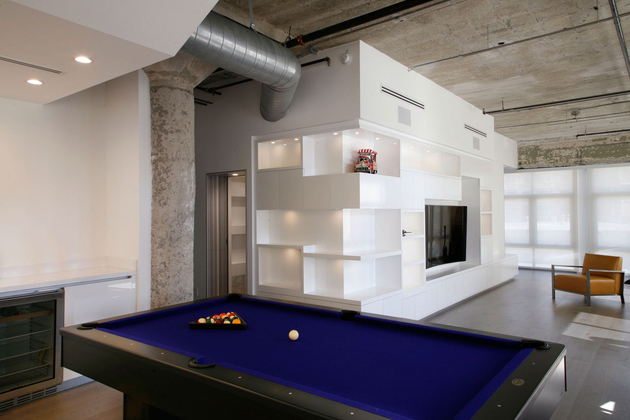 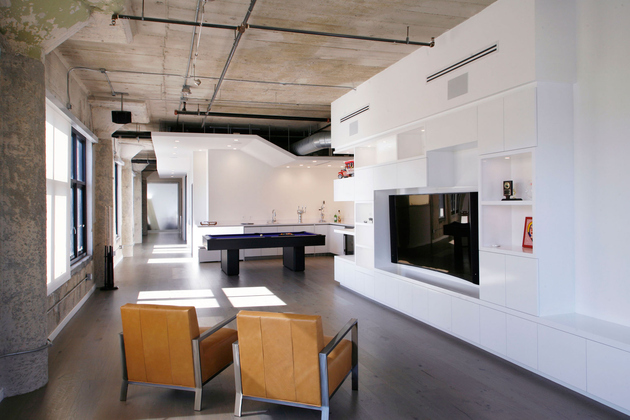 After opening up the two lofts to create the one large living space, there where sections of corridor connections and dead zones that needed to be incorporated into the overall design so as not to appear overlooks. The architects used these areas as large display areas, making them a feature rather than a hindrance. 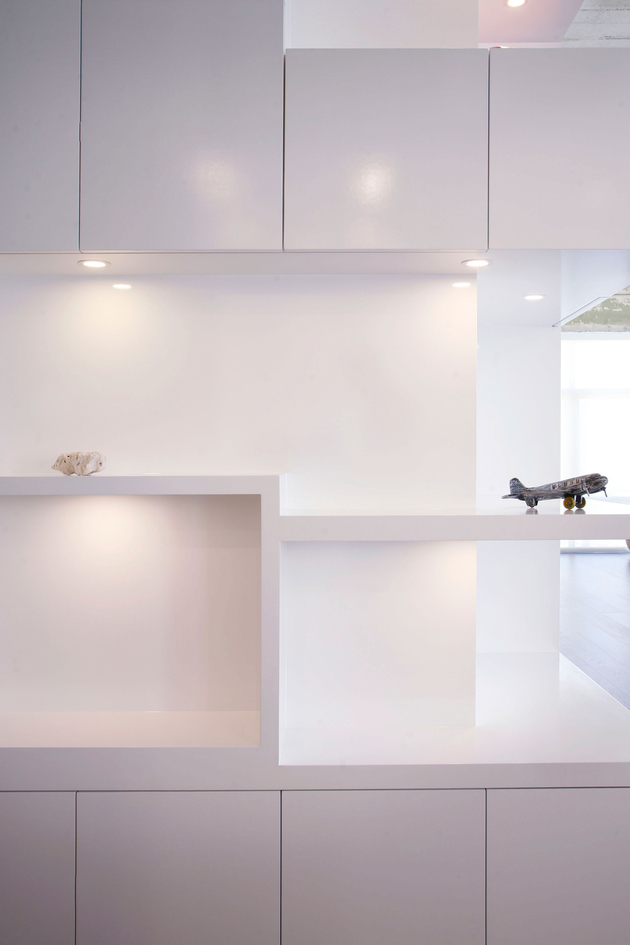 LEDs where incorporated into each of the open display areas, thereby highlighting the items chosen for display. 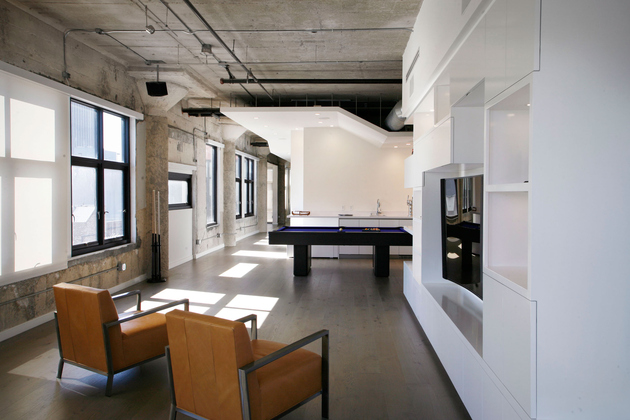 The dropped ceiling sections where designed as floating units that use ribbon connectors. To attach them to the concrete ceiling above. 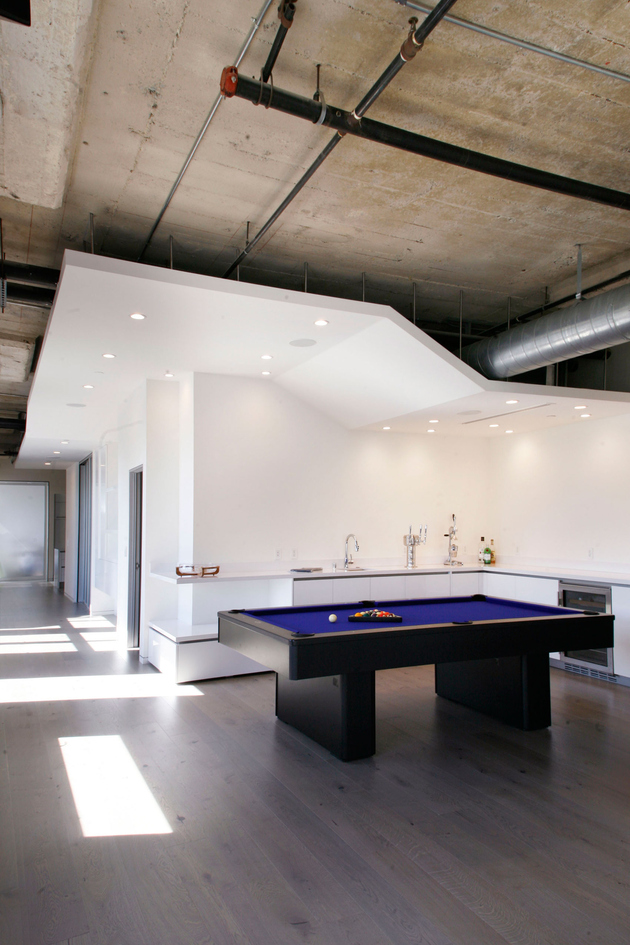 The dropped ceilings change height to accommodate the exposed ducting and electrical conduits. 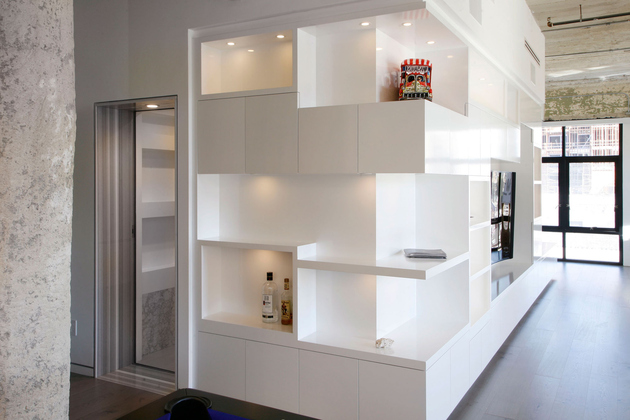 Completely custom, the millwork design wraps around corners and even hides a hidden service room behind the TV. 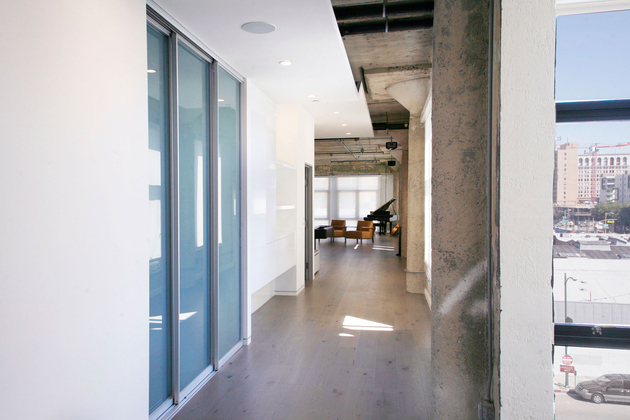 The now large and open entertaining space easily accommodates the media area, a piano and a pool table without infringing on the traffic flow and is completely separated from the more private area of the loft by a long hallway. 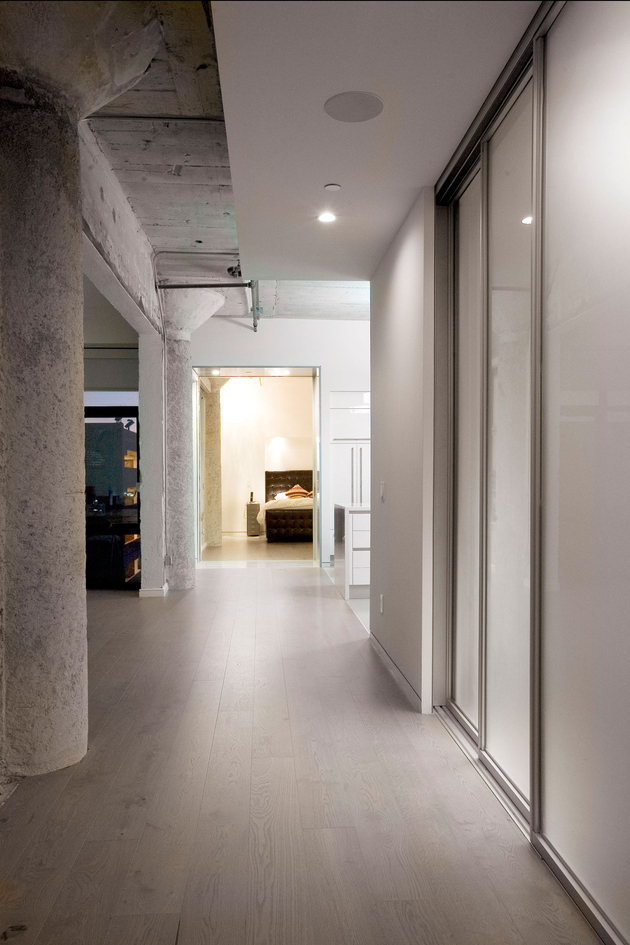 At the other end of the hallway is first the loft kitchen and then the master suite with the children’s areas off to the side. 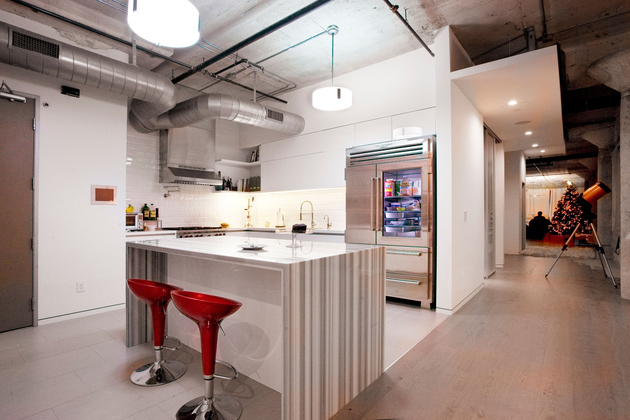 While the millwork and cabinetry used throughout showcase a sleek white, minimalist aesthetic, the exposed services and the concrete shell not only bring in an industrial flare but also keep the story of the original lofts alive. Successfully tying the two opposing designs together is the wide plank flooring. 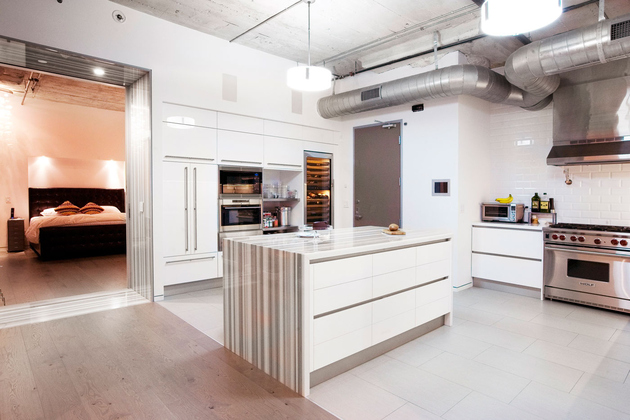 The gourmet kitchen is tucked into its own large nook and incorporates Bontempi systems and Porcelanosa finishes. Just behind the kitchen is the master suite which consists of the sleeping area, a large walk in closet and an ensuite. 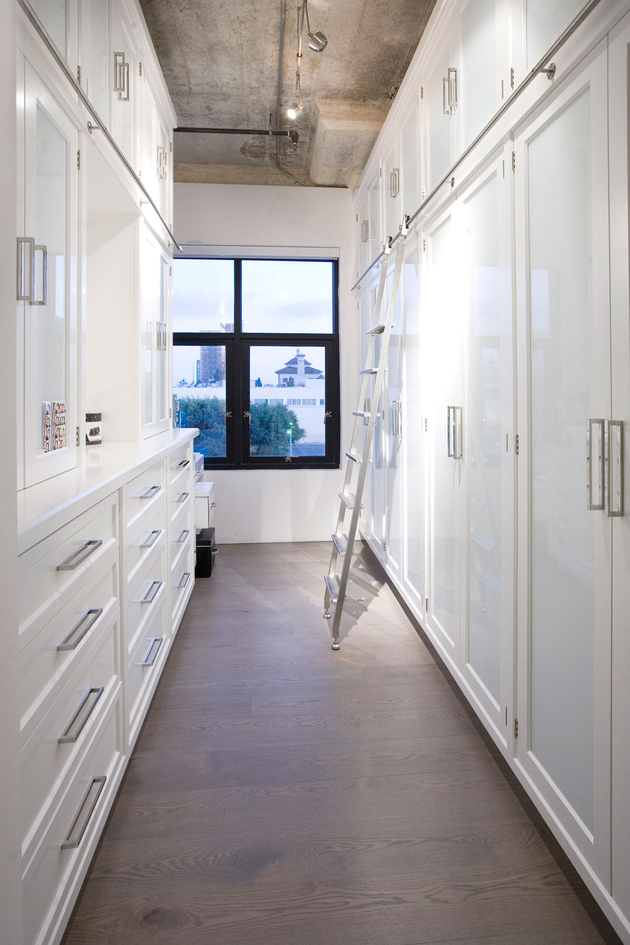 The walk in closet maximizes space by going vertically all the way up to the ceiling and to make access to the uppermost cabinets easy, the architects installed a library ladder system that slides easily on a track the length of the closet. 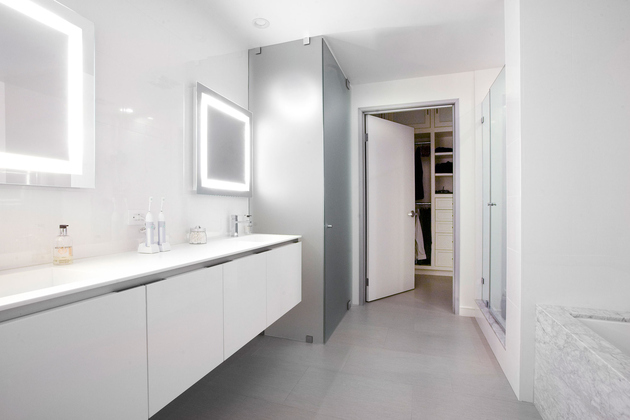 Built into the wall of millwork is the doorway to the ensuite which features a floating vanity and mirrors above with built in lighting. 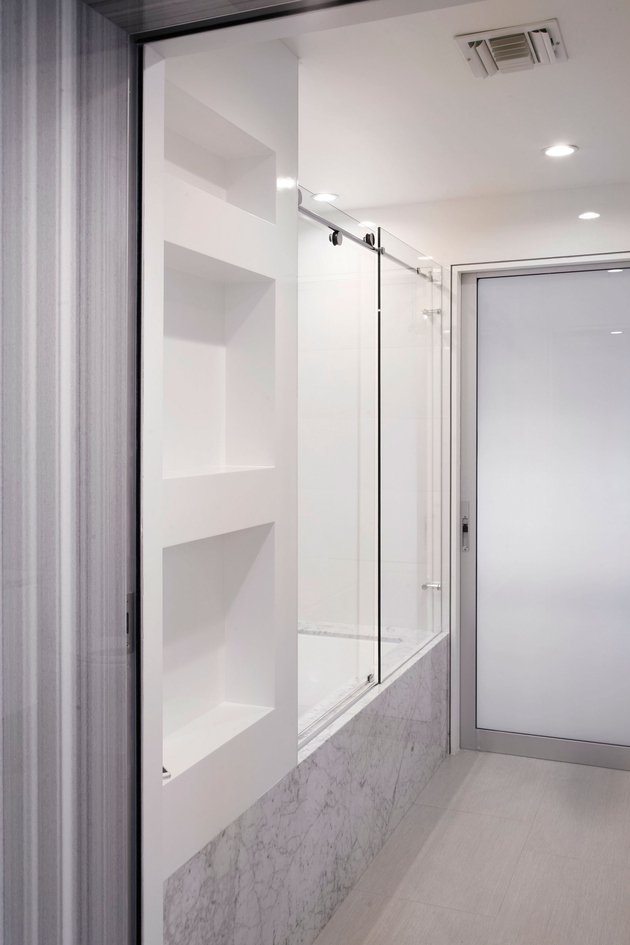 The ensuite has a soaker tub on the wall opposite the vanity and a walk in shower at the end of the room. 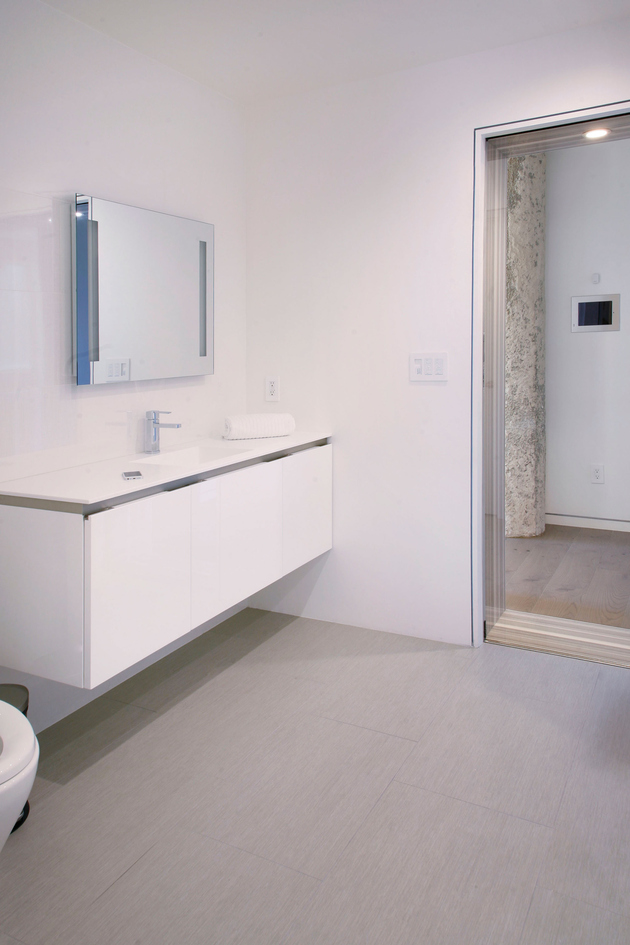 The children’s washroom is designed much the same as the master ensuite but with a small vanity and no walk in shower.
CHA:COL
Photography by Edward Duarte
Warehouse style loft can be overwhelming with its large size and high ceilings but CHA COL kept the interior of Twin Loft intimate with the use of display walls and dropped ceilings.

Two Small Lofts Inside a Loft 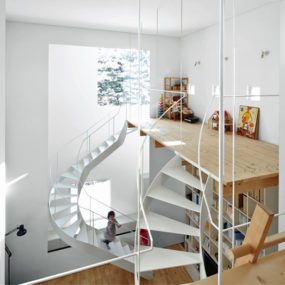 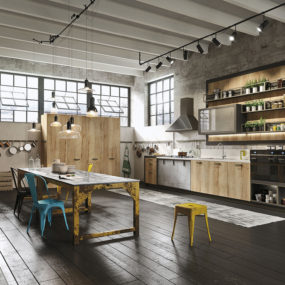 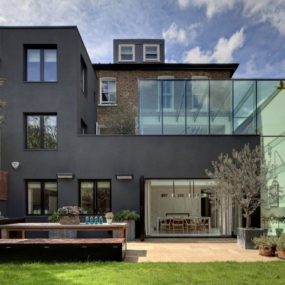 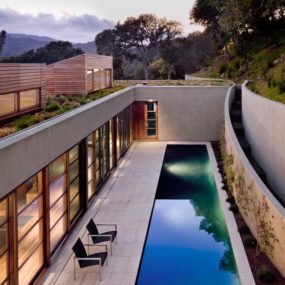 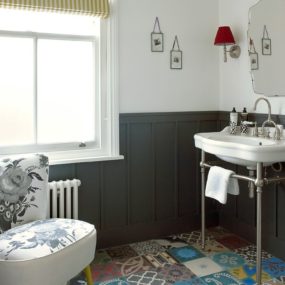 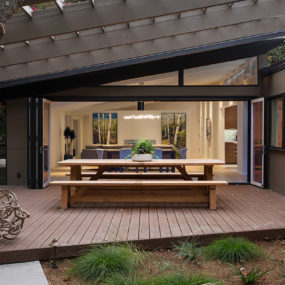 Two Small Lofts Inside a Loft