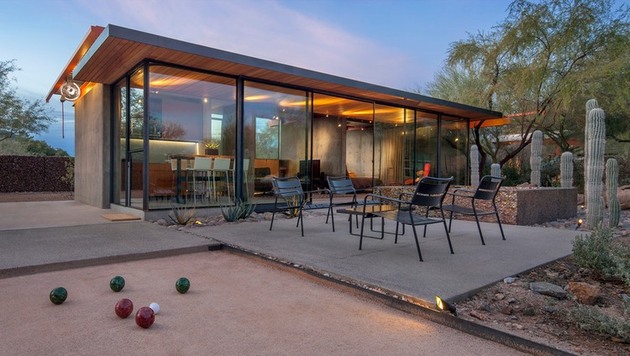 Built on the property of a larger home in Phoenix, Arizona, this small dwelling serves as a guest house for those making a visit to the main home’s owners. Designed by The Construction Zone, Ltd., the sleek cottage actually has much humbler roots as a horse barn. Other than some basic structure, though, the home has been done over so thoroughly that it’s hard to tell that it’s not an entirely new construction. Most of the surface of the house is done in glass window walls, leading out onto a large patio with space for entertaining. This allows the house to be used while not occupied as an impromptu living space for hosting guests, with direct access to the property’s amenities. The remaining architecture of the house is mostly concrete in form, dividing each room and providing support for the roof.
Inside, the floorplan is completely open, with only a single formal interior doorway (leading into the bathroom). The entire house is sectioned into four areas, allowing maximum usage of its 1,425 square feet of floorspace. A combination of built-in features and decor cues define each open-form room within the glass and concrete walls, allowing free flow between areas without a loss of identity for each. The glass wall from the front is limited to half-height at the rear, giving plenty of natural light without compromising on privacy. The home is very open and airy in feel, but still provides practical lodgings for a visiting couple. 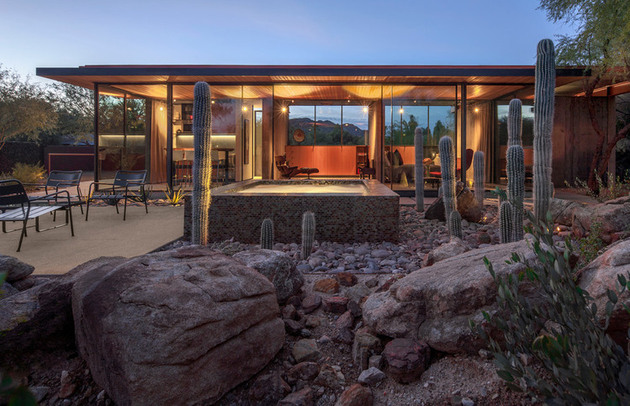 The building’s exterior walls are mostly constructed from floor to ceiling glass panels, with concrete dividing walls providing separation between each area inside and giving a stable structure to the cottage overall. 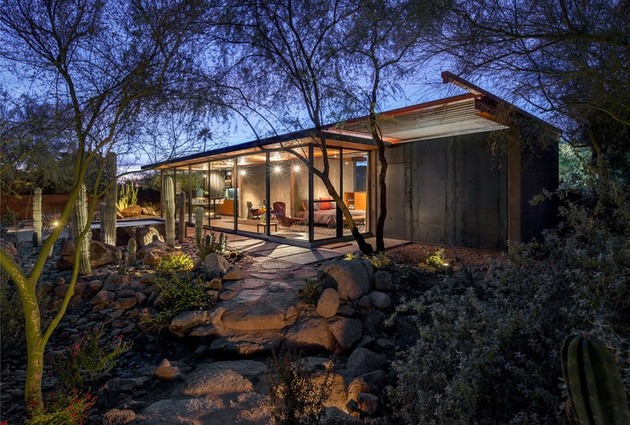 The guest house is isolated from its master dwelling down a long path filled with desert vegetation, allowing such an open glass-walled design without significantly sacrificing privacy. 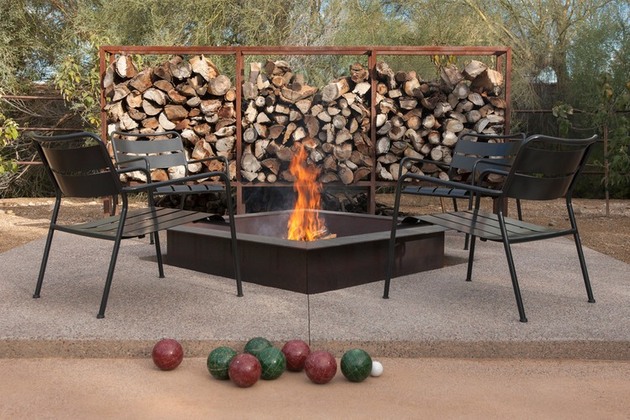 Most of the social spaces of the house are placed outside, where a large patio surrounds a hot tub and fireplace for evening gatherings. An additional seating area around an eating table is also set on the grounds. 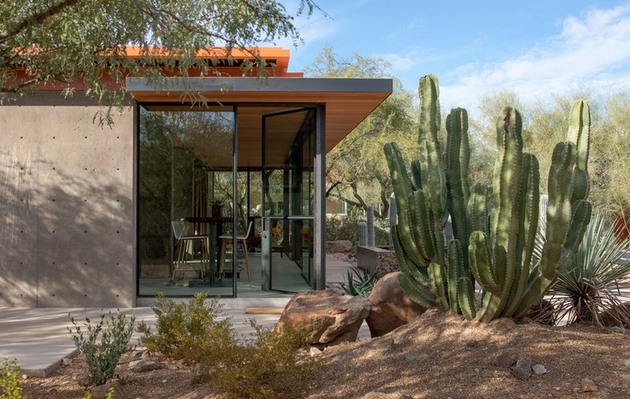 The home’s profile is accented horizontally be long roof overhangs, and enhanced vertically by its tall glass exterior panels. The result is an architecturally balanced dwelling that seems neither too tall or too long for the spaces contained within. 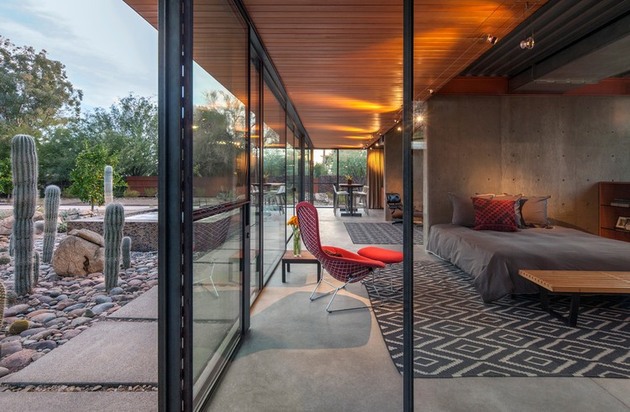 With conventional and sliding doors spaced throughout the front and side of the guest cottage, access to the outdoors is almost as easy as a glance through the windows. The concrete inner walls of the house all end before reaching a glass exterior barrier, making each major room inside open to the next. 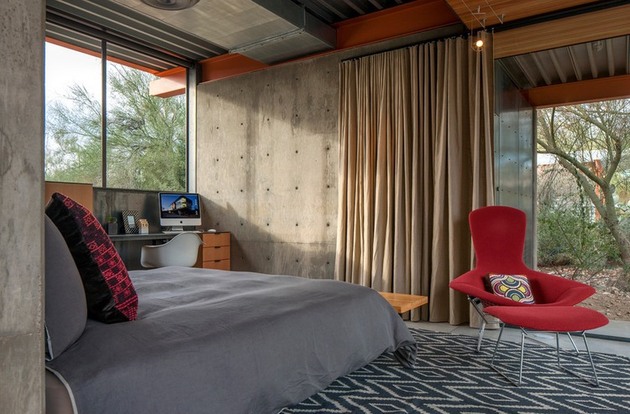 The only bedroom inside the compact house is located at one corner, protected from prying eyes by a curtain which can be drawn at night. The bedroom contains a bed for two, a built-in concrete desk, and enough storage space for a short stay as a guest on the property. 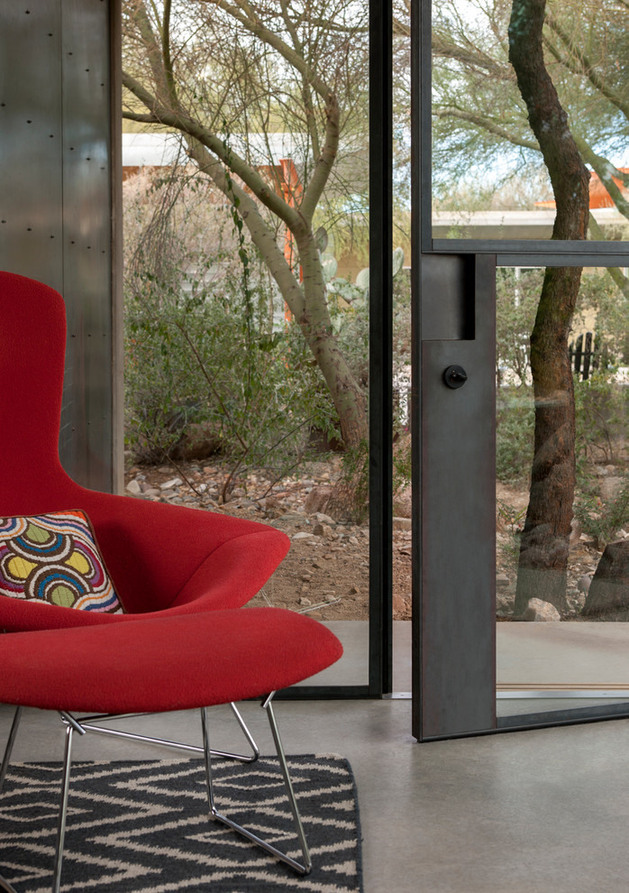 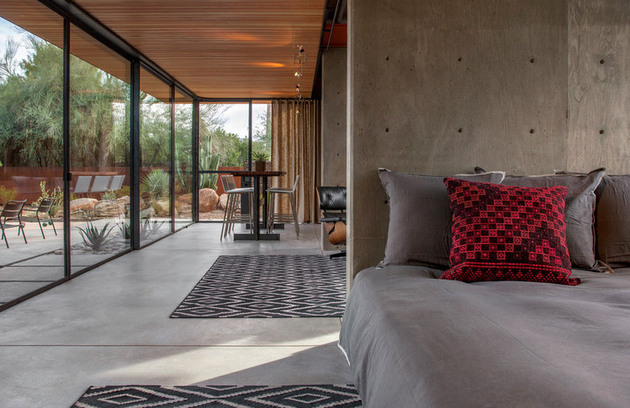 Various rugs are placed in different areas of the building to individually define the borders of each “room”, and further setting apart invisible hallway space beyond the bounds of each. The ceiling at the front half of the house is a series of light polished wood planks running perpendicular to the facade, which gives way further back to to the unfinished chic of exposed ducts and corrugated metal roofing. 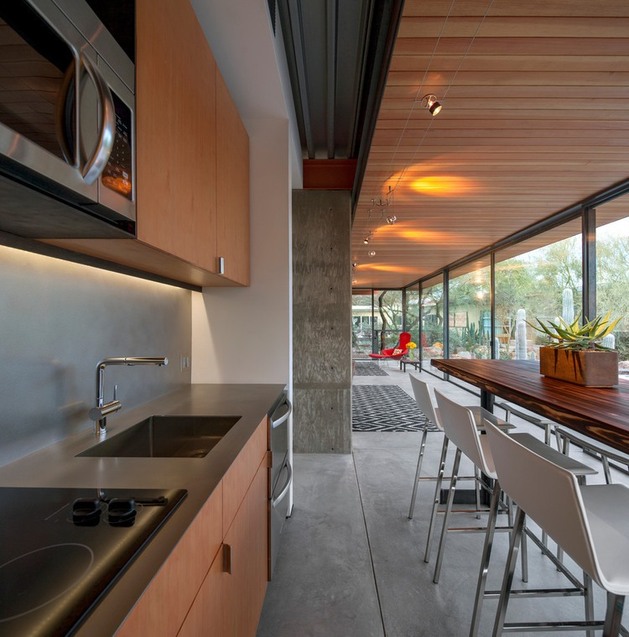 The kitchen is made up of two major elements: a counter and cabinet assembly with cooking appliances and cold storage, and a thin dining table with low-back midcentury bar chairs, seating up to six. 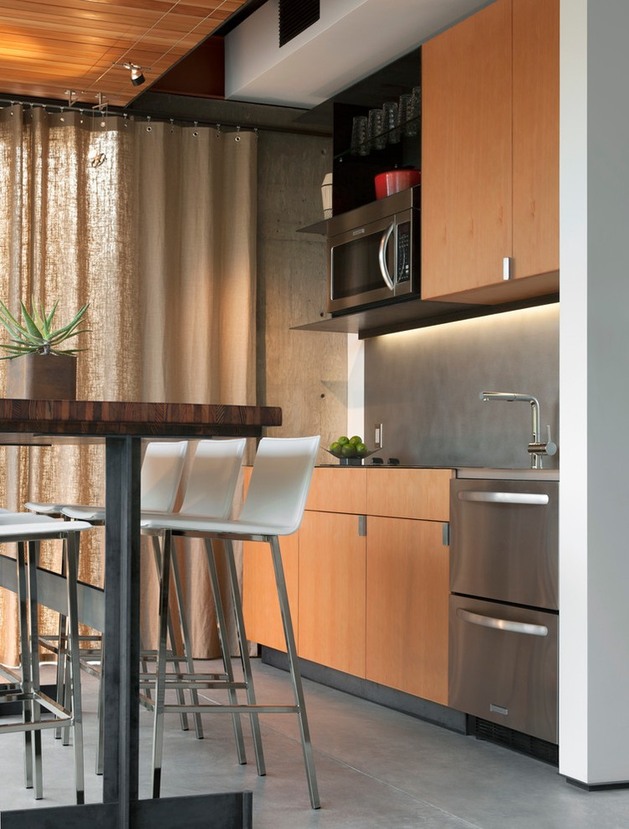 The cabinet finish in the kitchen is very reminiscent of the ceiling above, though it’s smoothed out further into a completely uniform surface. At the side, an additional privacy curtain obscures the view inward if need be. 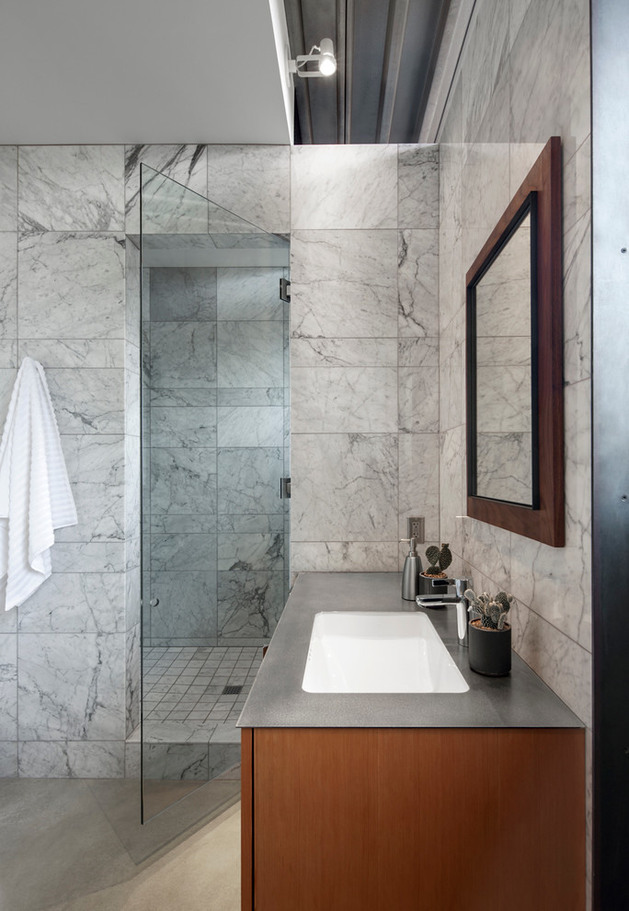 The only truly isolated room of the entire abode is its bathroom, set behind the kitchen. Its flooring is the same concrete that covers the floors of every room, but marble tile covers the walls and shower stall instead of unfinished concrete.
The Construction Zone, Ltd. 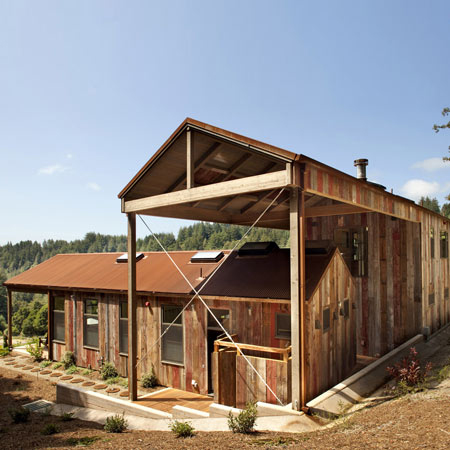