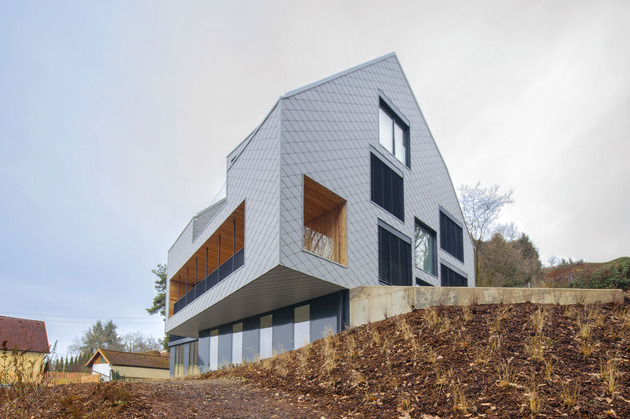 Located near the top of Am Bachlberg linz, Austria a quiet area near the woods and overlooking the Provincial capital, House B – with its spacious garden – had/has panoramic views of the distant Alpine foothills. The location was ideal but the pre-existing home was anything but. Architects Destilat was given the task to convert the run down building into a multi family dwelling 3 unit apartment house and they did this by gutting the original structure, and extending the home vertically with an additional floor. The building’s angle was adjusted to optimize the views beyond and a large underground parking area was excavated. The final result is a modern apartment house with a textured façade and pops of colour within the window voids. 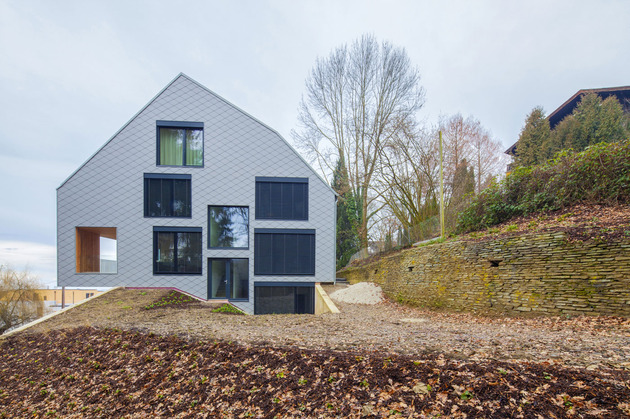 The home is clad in grey shingles that form a diamond pattern. The shingles are made of asbestos cement (Eternit) and the small repetitive pattern that the shingles create reduces the overall scale of the building. Additionally the somewhat haphazard location of the windows brings a sense of fluidity to the facade that is further enhanced by the asymmetrical roof-line. 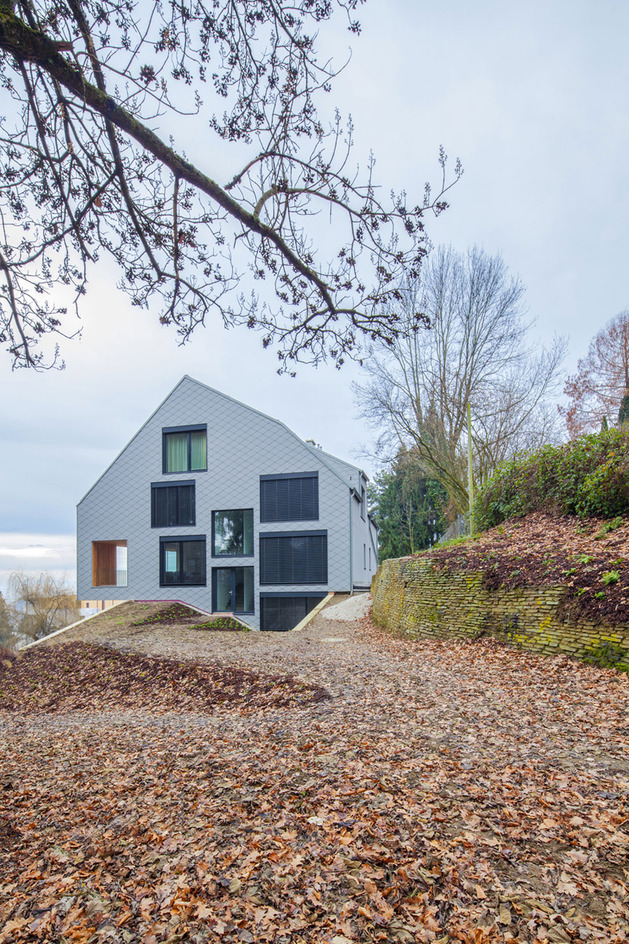 The 3 apartments within the building range in size from from 140 to 200sqm or1,507 to 2,153sqft. and each has its own unique character. The home originally had an indoor pool on the ground level and this has been converted to a garden access apartment. 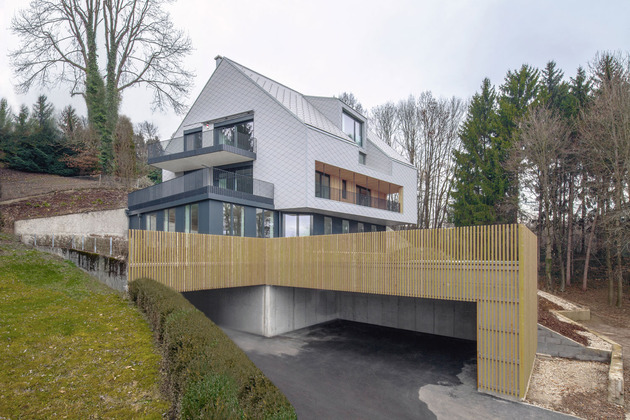 With 3 individual apartments contained in the structure, parking for multiple cars was an important requirement, but rather then paving over the property’s garden and grassy areas, the architect excavated below the home and created an underground parking garage. 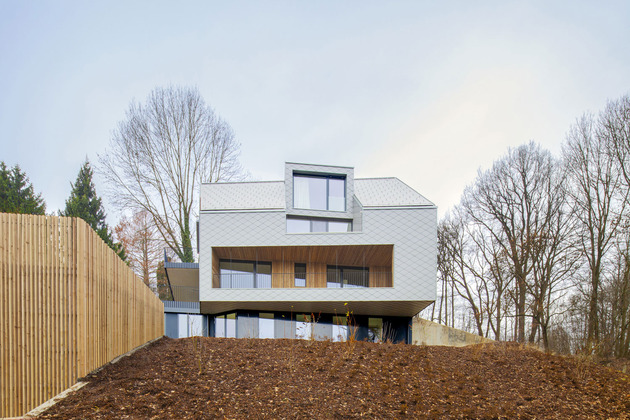 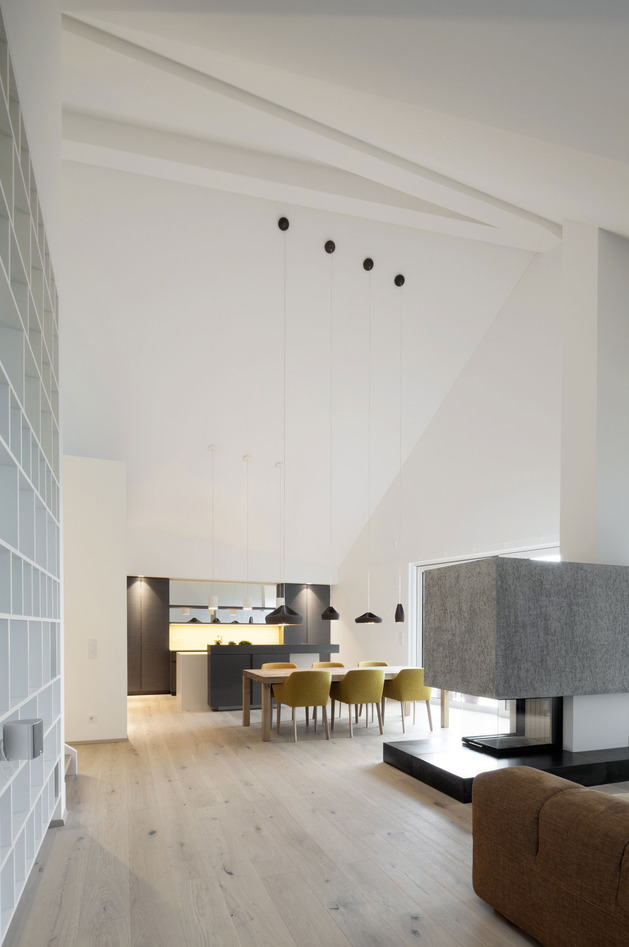 Penthouse B is an open concept layout with the social zones laid out in a row. At one end are the kitchen then dinng areas and at the other end is the living room. A large fireplace peninsula separates the living room from the dining room. 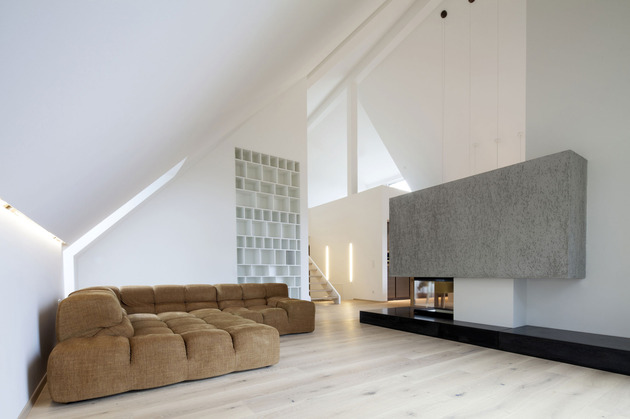 The ceiling of Penthouse B follows the peak of the roofline which is up to 6.5mor 21ft high in the centre. The lounging area is tucked under a low point of the peak creating an intimate setting. With white angles walls that are also the ceiling and pale wood planks on the floor, the apartment has a modern Scandinavian aesthetic. 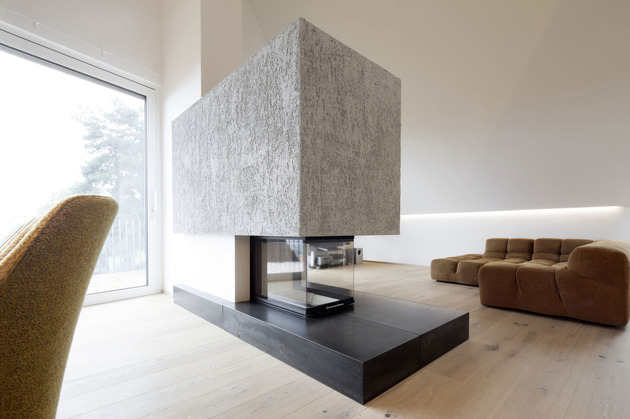 The fireplace unit itself is a regular size and surrounded on 3 sides with glass panels. The facade around the fireplace is huge and features geometric volumes of various sizes and varying shades of grey to create a large sculptural dynamic that is both exciting and impactful. 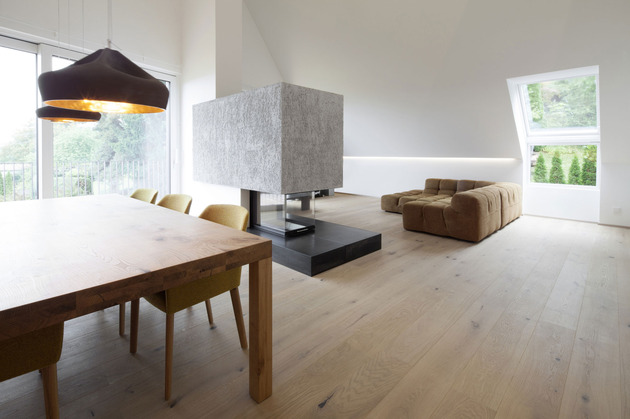 The dining table is quite large and is capable of seating 8. The pendants over the dining table each has a slightly different profile each over-scale with the glow of copper on the inside of the shades. The lights are a powerful modern moment in keeping with the bold silhouette of the fireplace surround. 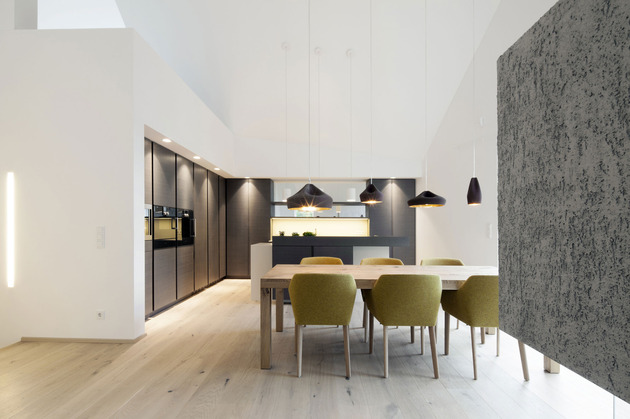 Just past the dining area is the kitchen. The kitchen continues the story of grey with its cabinetry and the glow of lights on the cabinetry from the recessed pots in the ceiling perimeter. 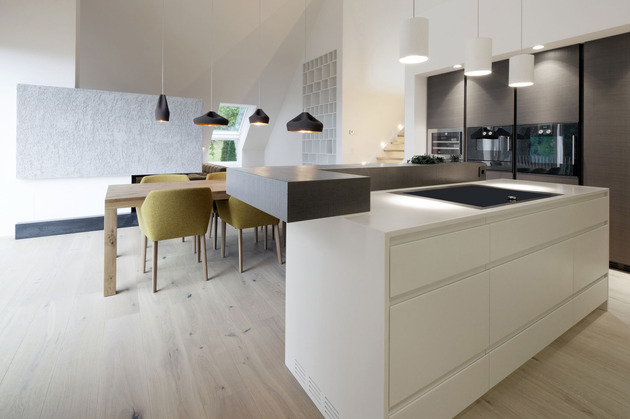 While the wall cabinets are a charcoal grey, the island features white cabinetry and white pendants above. 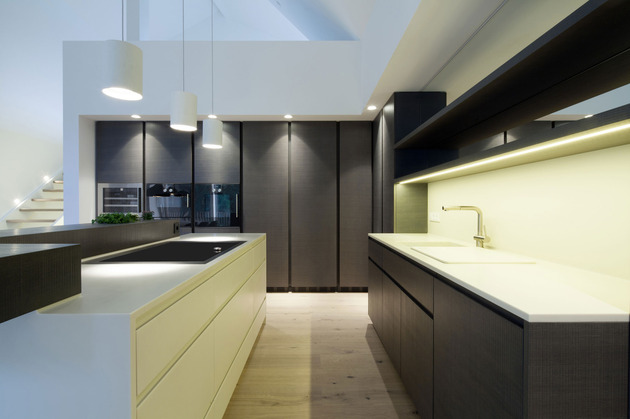 The white cabinetry of the island and the white counter tops and backsplash keep the kitchen light and bright while the charcoal grey cabinets and bar top bring in the drama as does the various lighting elements. 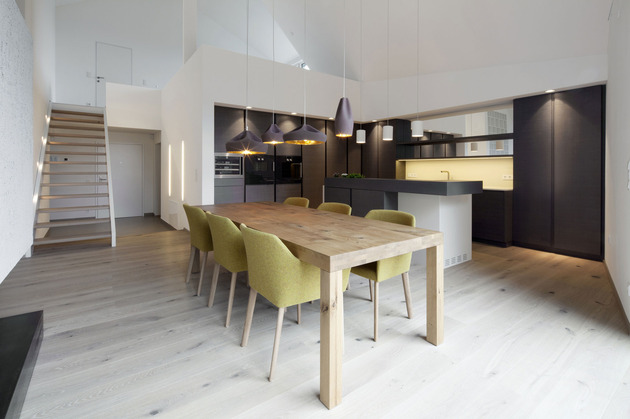 Tucked in behind the kitchen is the foyer and a stairwell that leads up to the loft..

The foyer has a wall of glass with a suspended two drawer tabletop for storing small items and checking one’s appearance before heading out. 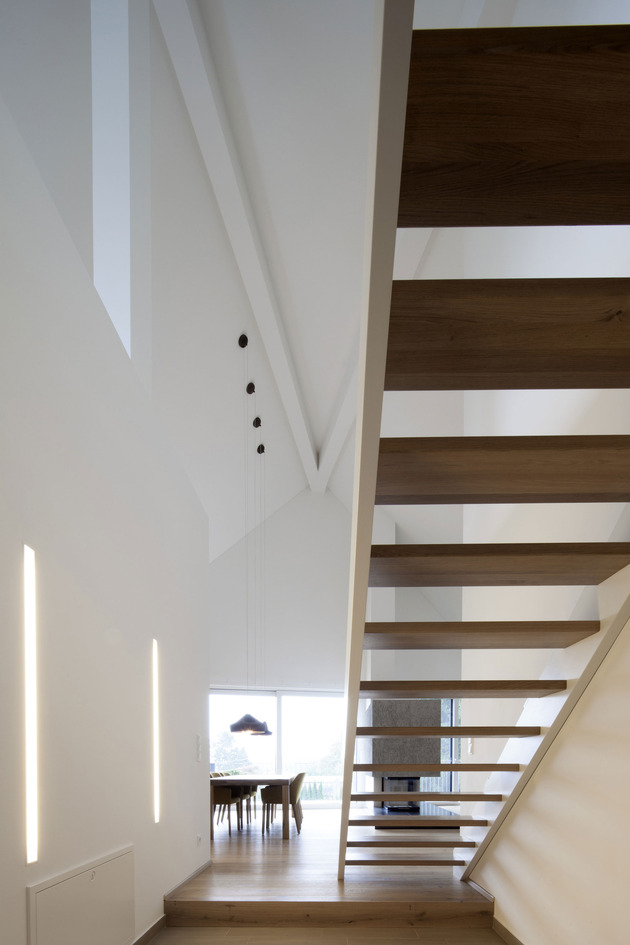 The stairs are an open riser design which allows natural light from the windows to continue into the back of the apartment where the foyer is. 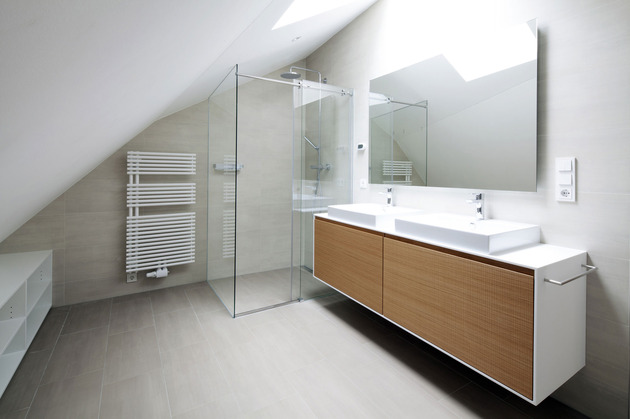 The bathroom has no windows but a skylight keeps the room light and bright. Grey is also a feature of this room, but the shade of grey is a much lighter ash tone.
Destilat
Photography courtesy of Destilat 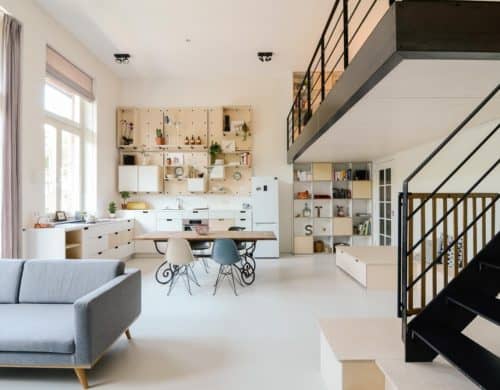 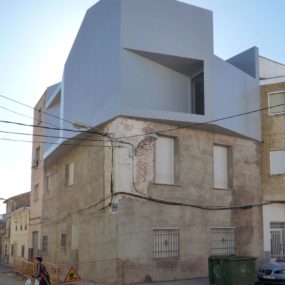 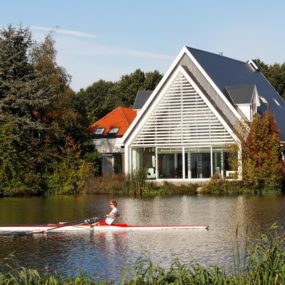 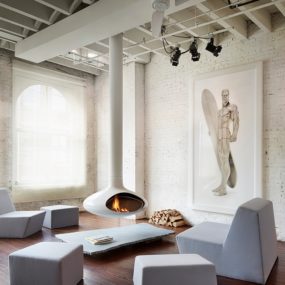