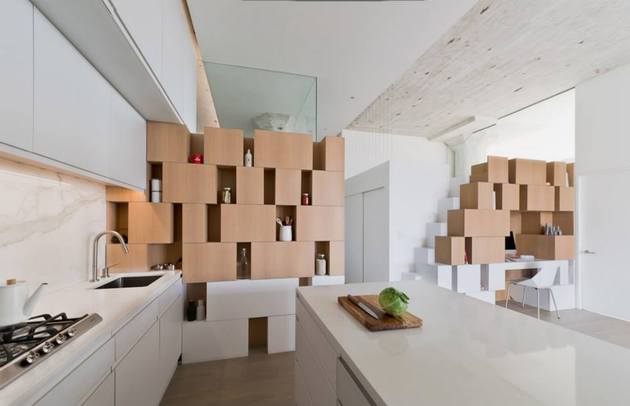 SABO Project took a standard loft in Brooklyn and upped both the visual intrigue and the living space by thinking outside, inside and all around the box – meaning storage boxes where designed to create a creative wall of wonder that bumps out and recesses inward while at the same time morphing into a conjoined stairwell that leads up to a new play area for the homeowners two children. 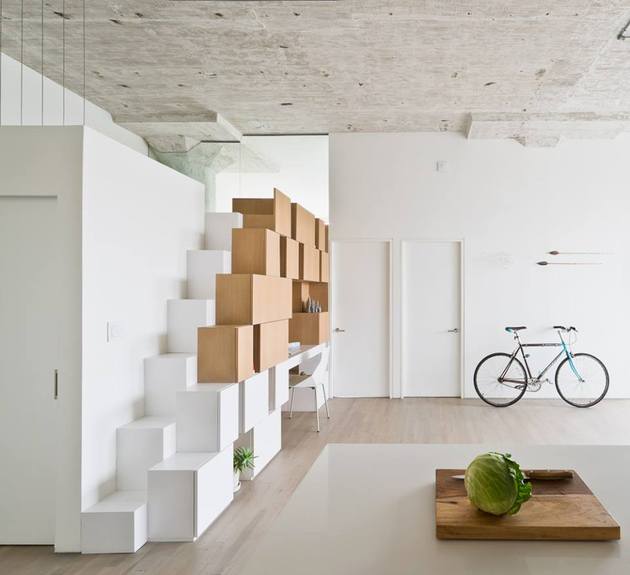 Originally presented a brief that only included a bathroom renovation, the unique and creative approach to small space living by SABO Project was soon realized and the homeowners expanded the project to include the complete loft. 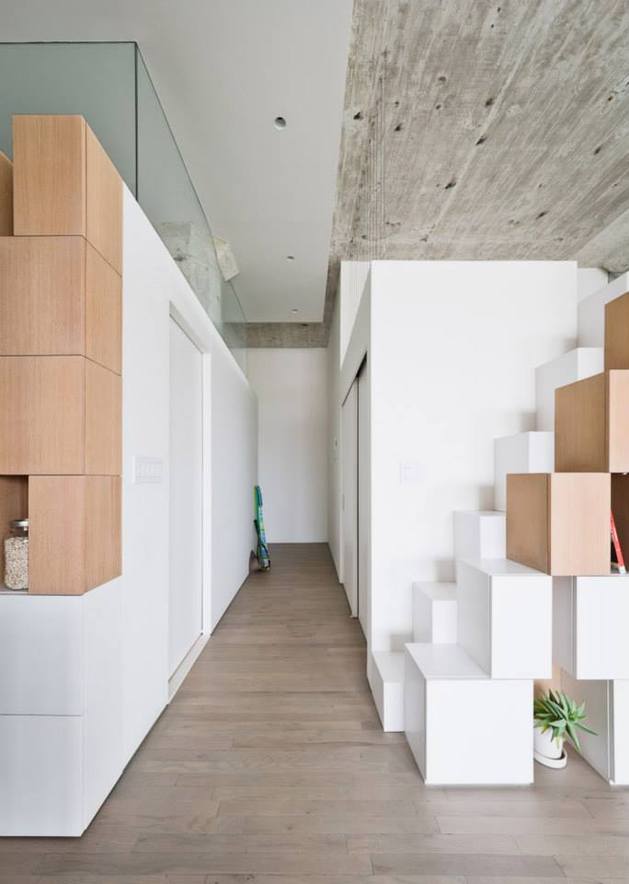 SABO Project gutted the complete interior of the space so they could begin with a “blank canvas”, hindered by non of the previous 1980s renovations that where done to convert an original die-casting factory into apartments – including the loft – and it was from this blank canvas that the idea of a “mezzanine” for the children accessed by stairs incorporated into a wall of storage emerged. 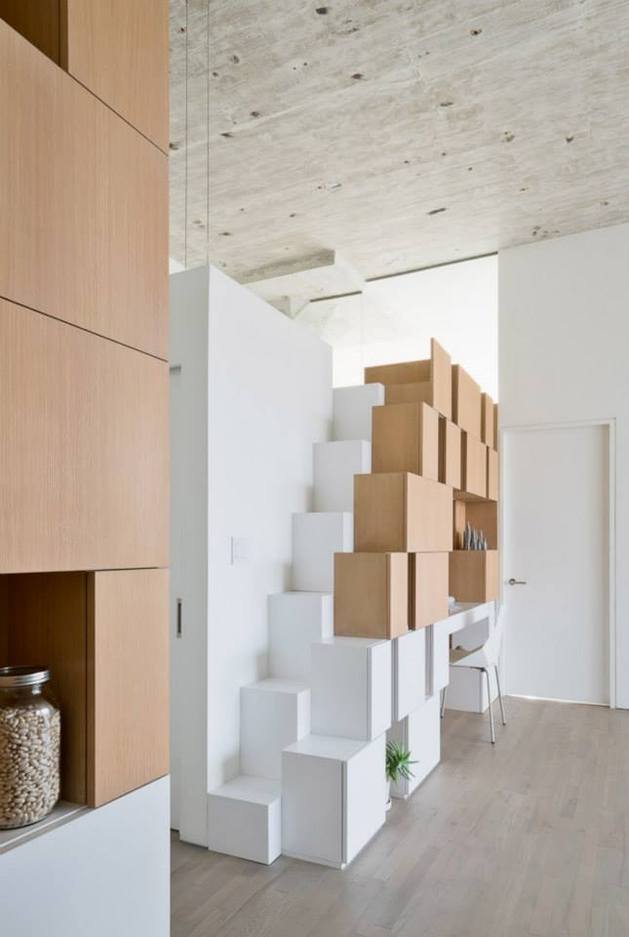 Aside from the play loft and built-in storage, SABO Project was also able to expand the functionality of the space by creating an extra walk-in closet under the mezzanine and increasing the size of the original bathroom by 30%. 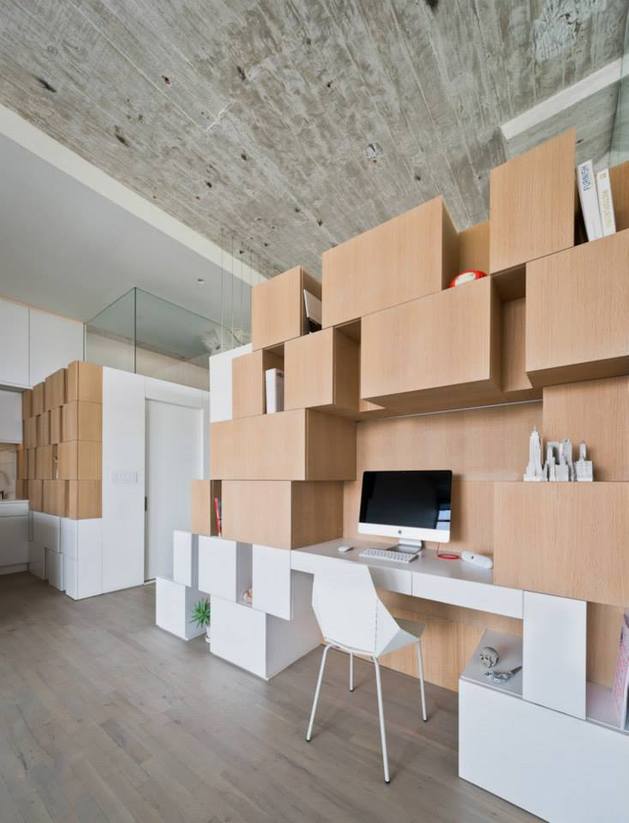 In addition to creating additional living space, SABO Project was also able to expand the volume of the loft. This was a surprise realization that came about when the original ceilings where removed and almost a meter of hidden height was exposed. 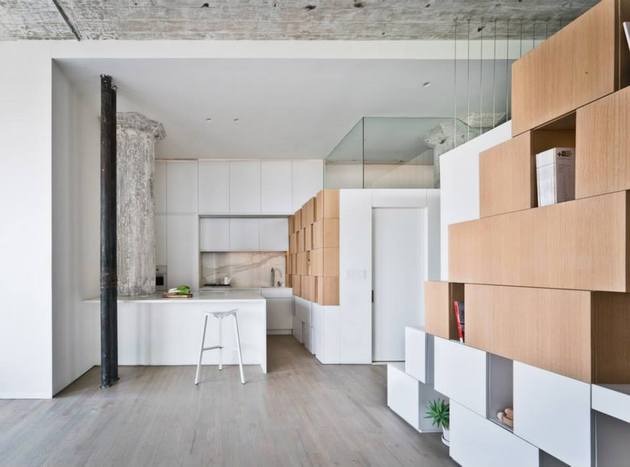 The space above the original ceilings was serving no purpose and was easily incorporated into the new improved Doehler Loft giving each room a new height of 3.6 meters. With the addition of the extra height, some of the new walls have been fitted with clerestory glazings to allow light to easily transfer from one space to another. 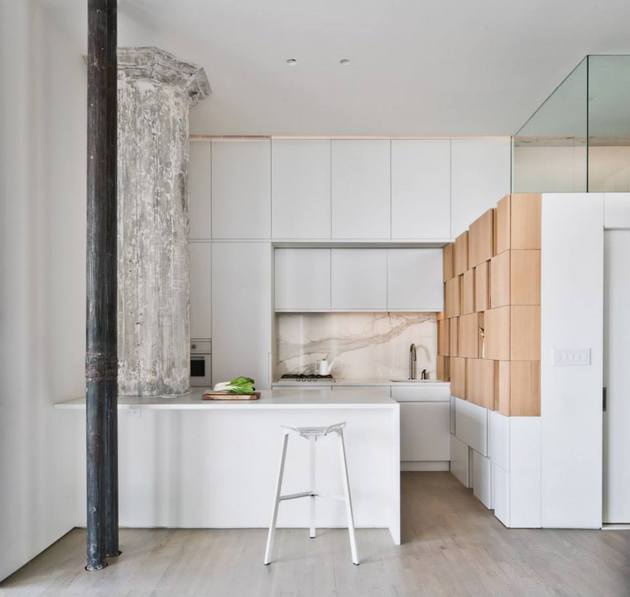 The original voluminous concrete columns and concrete ceiling that had been hidden behind drywall where now exposed and celebrated. The size of the columns is due to their need to support heavy casting machinery and tonnes of miscellaneous metal ingots. They are part of the building’s story and heritage making them a special feature indeed. 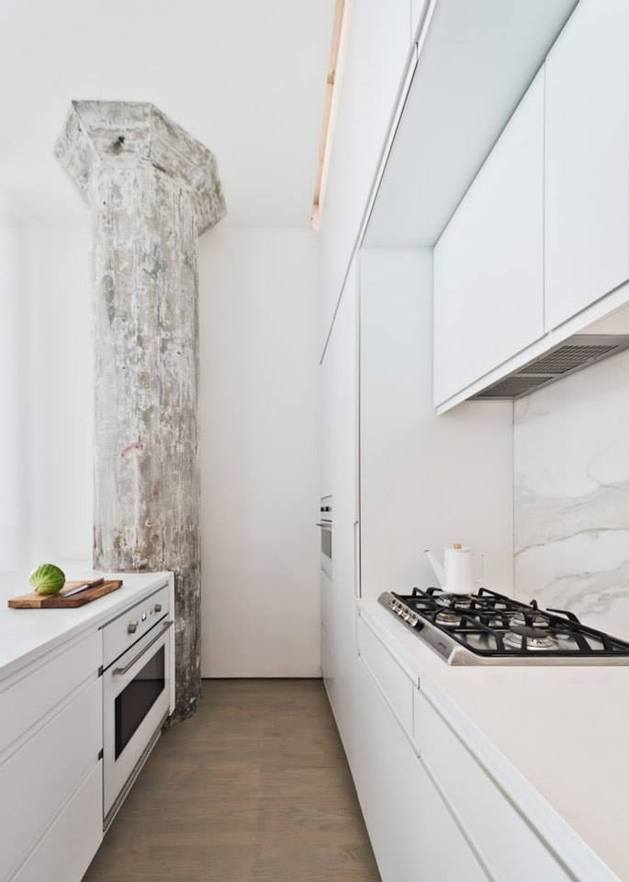 The columns also reveal 100 year old wood formwork and construction methods within their patina and this historical artifact aesthetic creates a connection between the past and the present for all to appreciate. 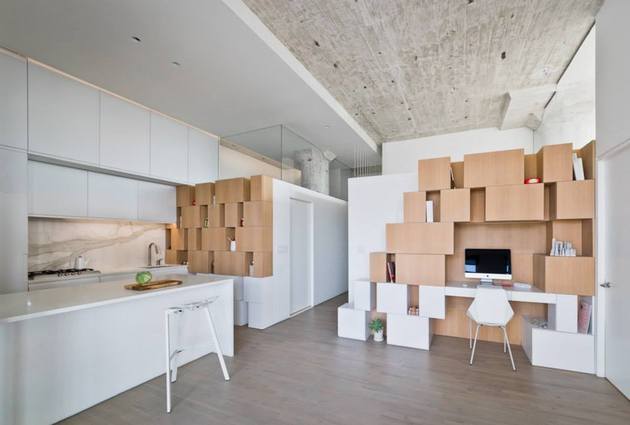 Juxtaposed against the historical features of the new loft design are the white oak wood boxes designed in a vignette of casual sizes that feature both open and closed storage unites both in the kitchen and the living room. 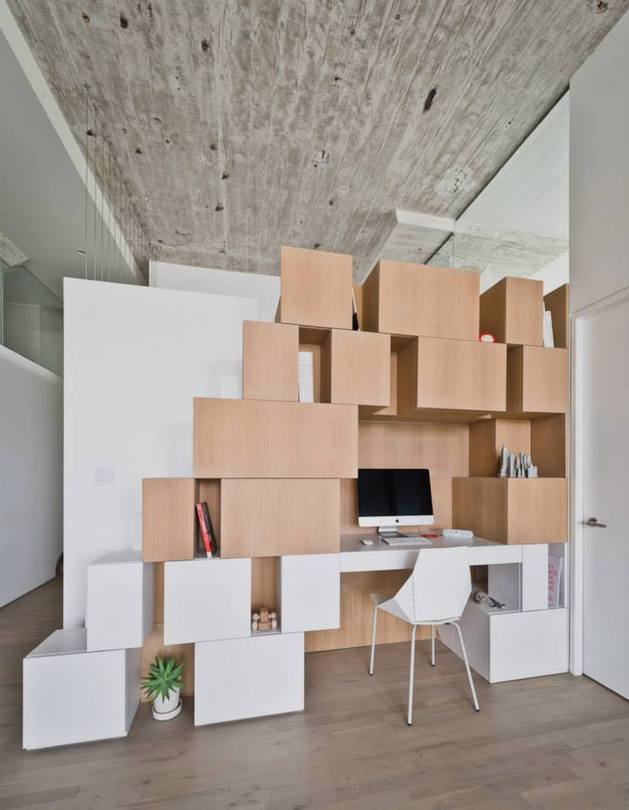 The living room storage section contains a workstation as well as the half-tread stairs that lead to the children’s mezzanine. 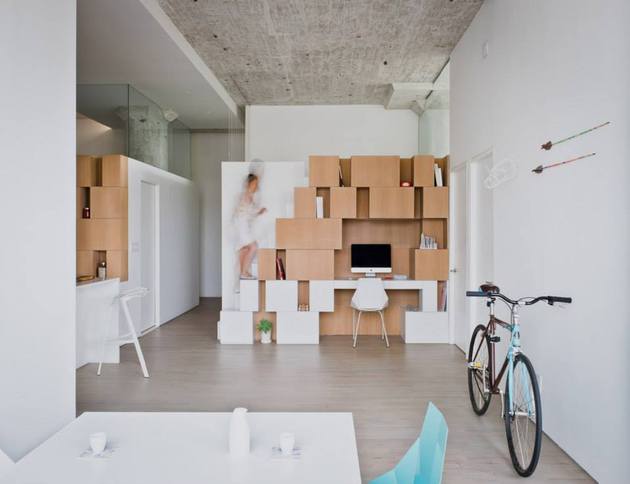 While the main focus of the mezzanine was to create a singular zone for the two children to play, it also doubles as a guest bedroom. 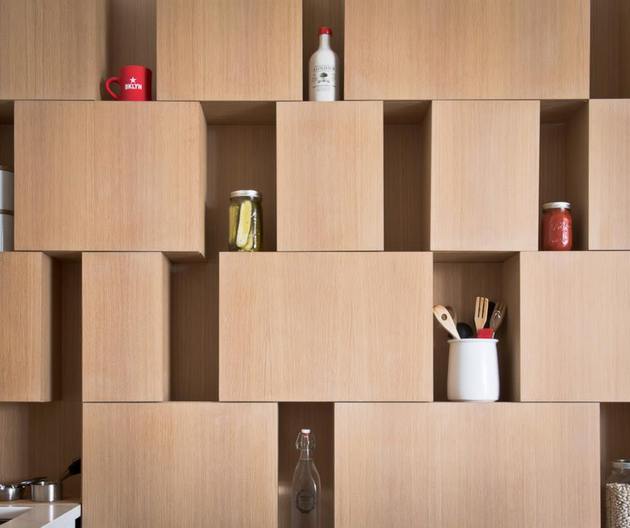 The casualness of the storage unit sizes is not casual at all. Each compartment has been carefully sized for specific functions from holding dinnerware to displaying mementos to holding a printer. 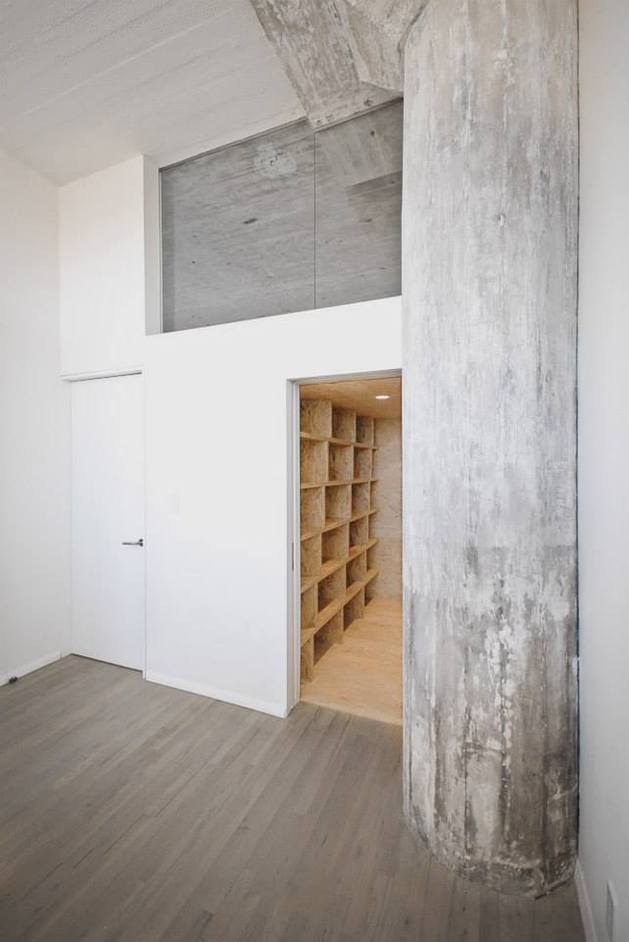 Behind the storage wall and beneath the mezzanine a new walk-in closet has been created. 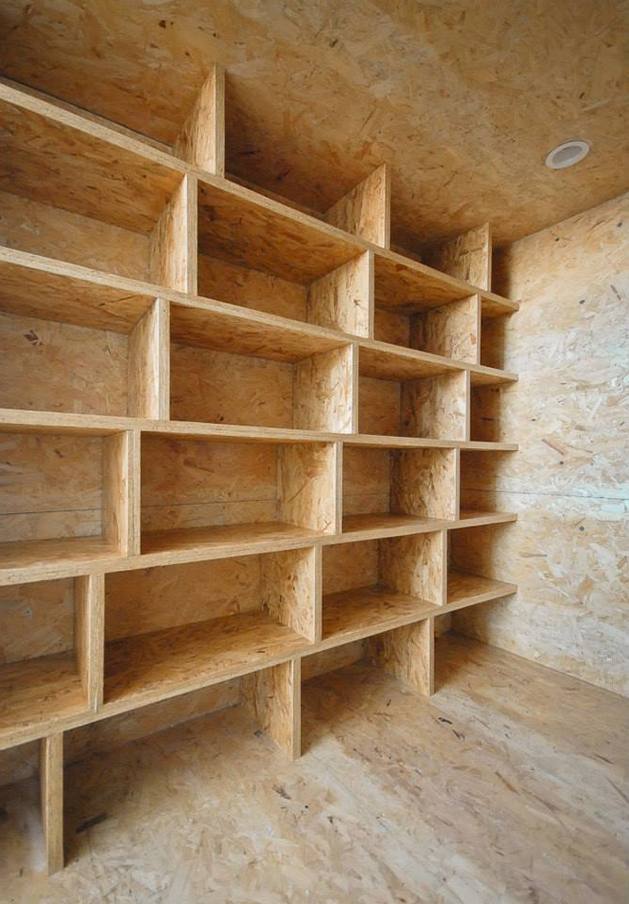 The new closet has wall to wall shelving built from Oriented Strand Board. 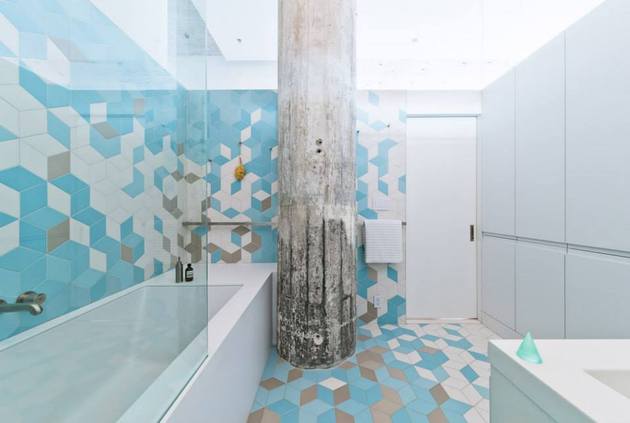 The renovated bathroom is 30% bigger and far more interesting due to the unique tile applications and the original die-cast factory column positioned next to the tub. 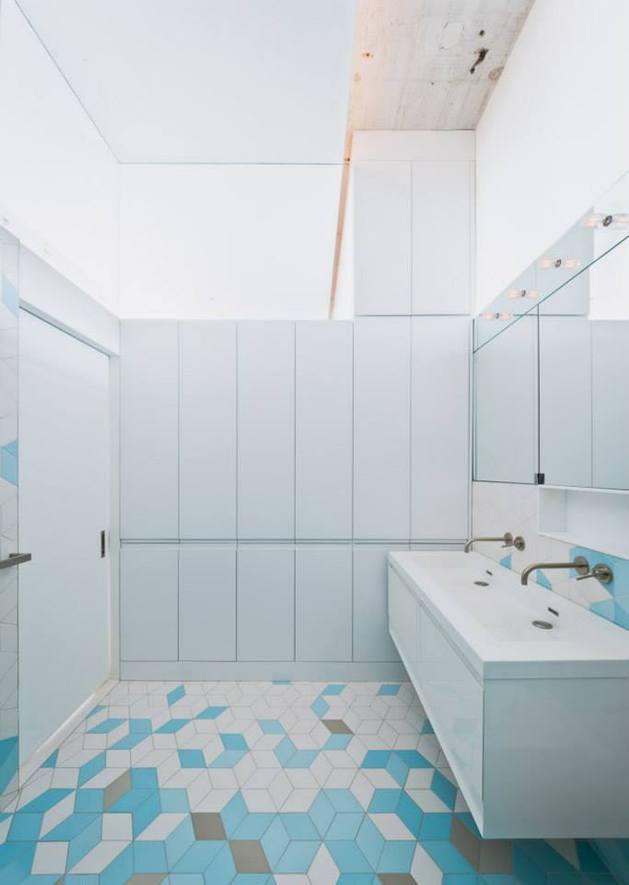 Although the tiling is unique and specific to its location, the tiles themselves are a standard diamond shape in a variety of standard colors that have been arranged to create a 3D pattern that plays off of the cube effect used in the rest of the loft. 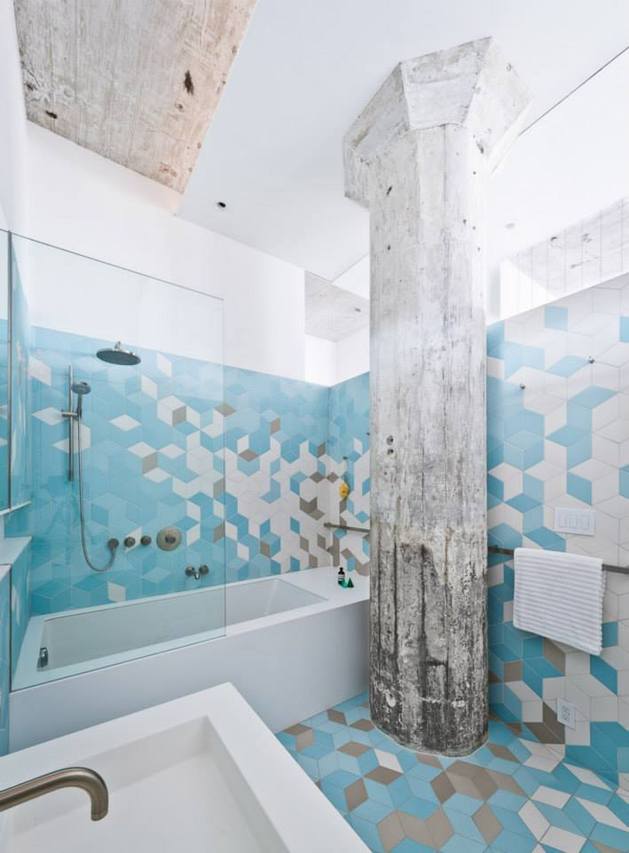 While the tiles and colors may be standard, the pattern was anything but and it required a skilled tile setter to take the initial detailed drawings and transfer them onto the floor and walls, carefully wrapping them around corners without compromising the overall graphic. 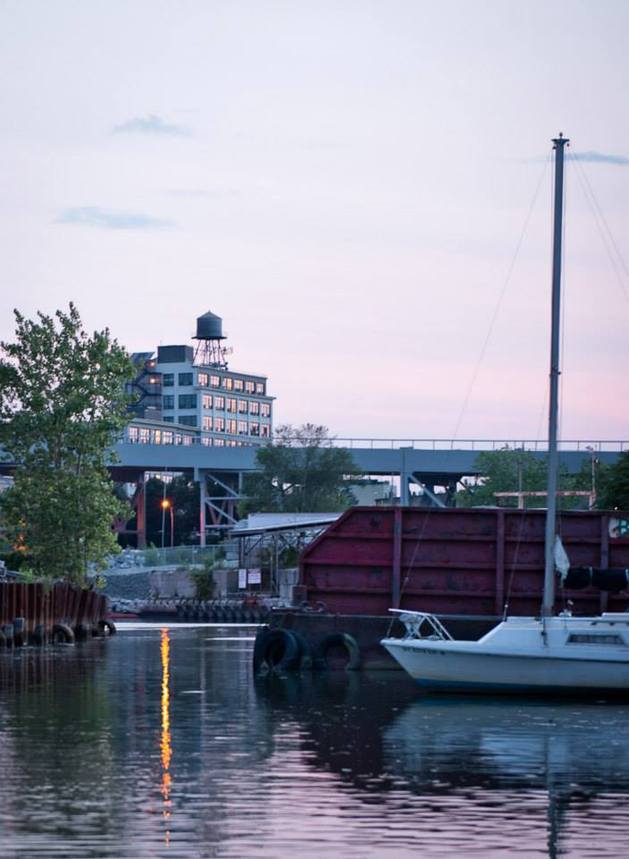 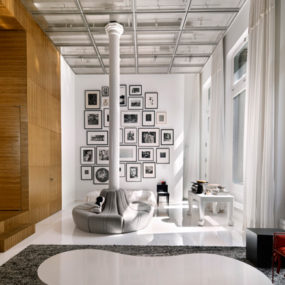 Unusual and Creative Minimalist Loft in NYC with a catwalk 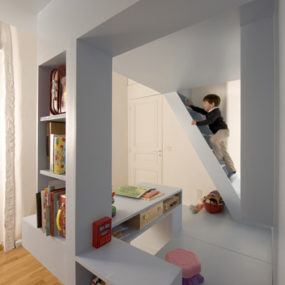 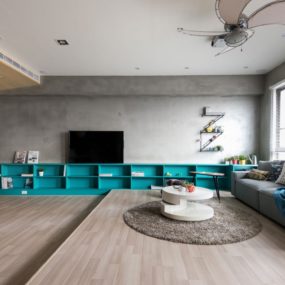 How to Define a Space with a Low Storage Wall System 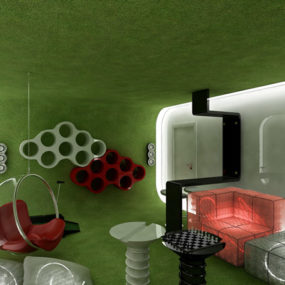 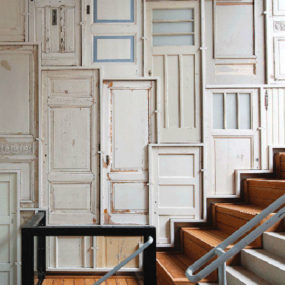 Unusual and Creative Minimalist Loft in NYC with a catwalk

How to Define a Space with a Low Storage Wall System