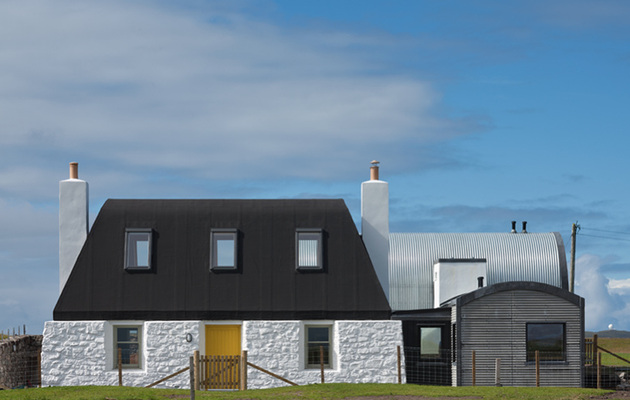 Picturesquely overlooking the sea surrounding one of the islands of the Inner Hebrides, this impressive interpretation of the seaside cottage honors both Scottish tradition and present-day design ethos. Its owners contracted a firm for a complete overhaul of the design for a small home that once stood on their property, but had fallen into ruin over many centuries of wear. Envisioned by Denizen Works, the house is spread out over three distinct spaces, with its focal point at a stone bungalow that looks from afar like any other residence in its agricultural surroundings. One corner of this building serves as the crossing point between it and two shining aluminum-clad buildings with cylindrical roofs, ultramodern additions whose exterior materials still invoke agriculture and small industry. Inside each of the wings is a combination of public and private spaces, all defined by the same theme as the exterior: a mixture of the old and the new. Within and without, the house is thoroughly cutting-edge on the design front without betraying its agrarian roots. 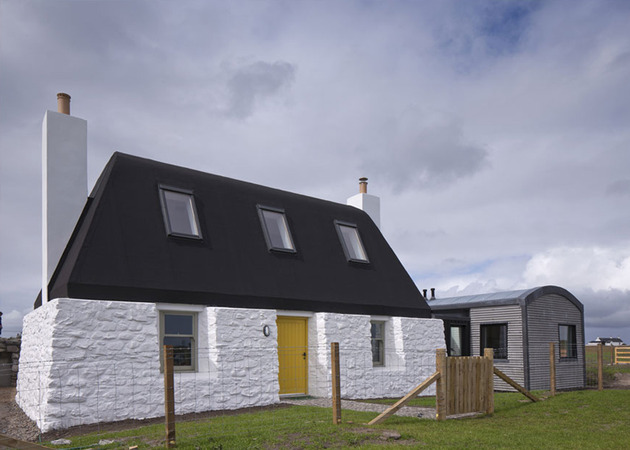 Though it’s built on the site of a ruin and based on the historic design of that ruin, the cottage building is a new construction. As such, Denizen Works took liberties with the architecture, adding large windows and a smooth-finished black roof. A bright yellow door helps to integrate the main cottage with its aluminum-covered descendent structures. 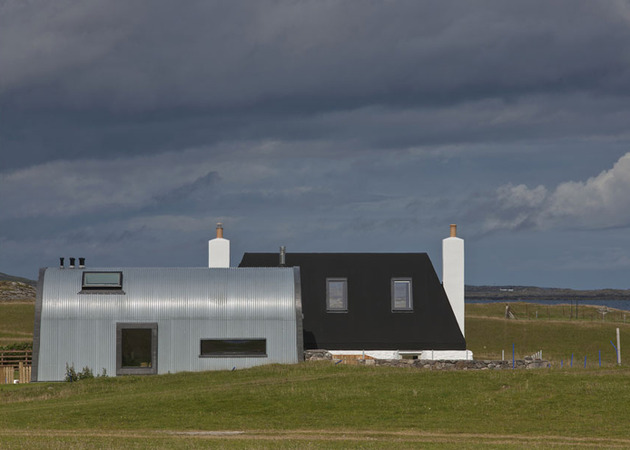 From behind it becomes clear that the contemporary addition to the cottage’s design is more than one simple structure on the side. Instead, two different state-of-the-art curved wings wrap around one half of the main stone building. 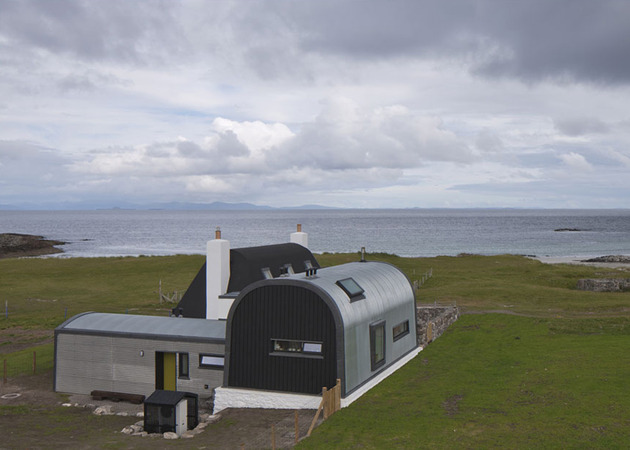 The house sits on a spacious property on the edge of the Isle of Tiree, overlooking the powerful waves of the Atlantic. 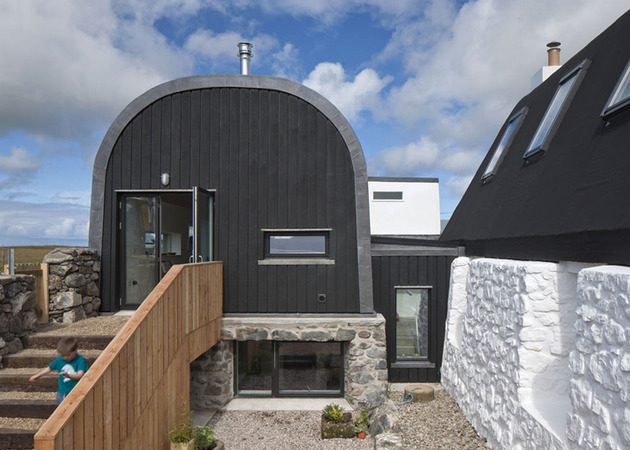 The modern sections of the home don’t reach any higher above the ground than the conventional building does, but utilizes a half-sunken bottom floor to heighten ceilings inside. This leads to a half-story ascent up to the entrance at the abode’s back, framed on one side by wood and on the other by stone. 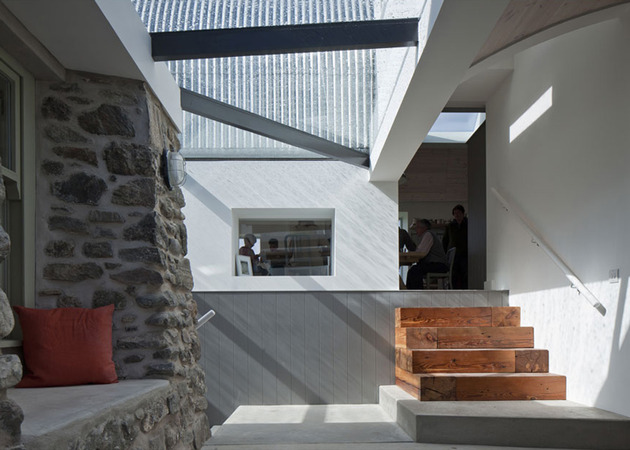 At intersection points, structural awnings and beams connect each wing physically, creating shade that minimizes visual differences between the structures. 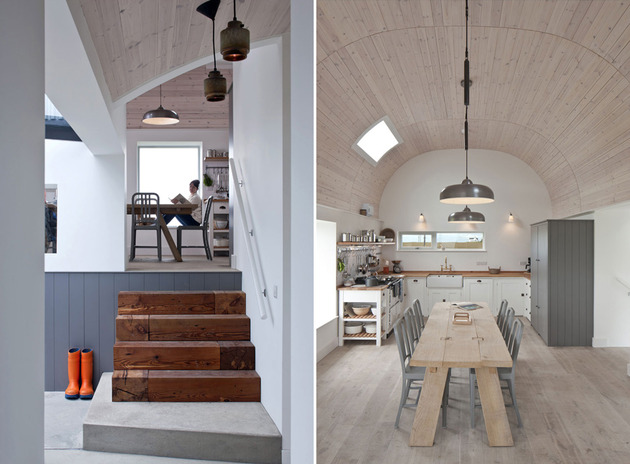 The curvature of each reflective new wing adds significant amounts of ceiling height to public areas, opening up spaces like the dining room and rear entrance. 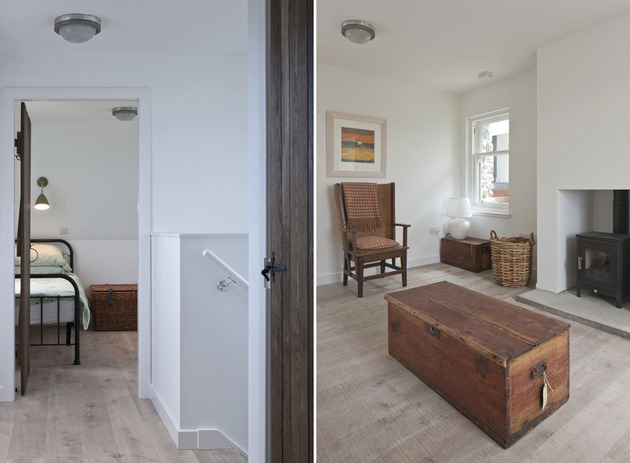 Every piece of the residence’s indoor space is connected intentionally to the past, with weathered furniture pieces and wood-burning heat used throughout. 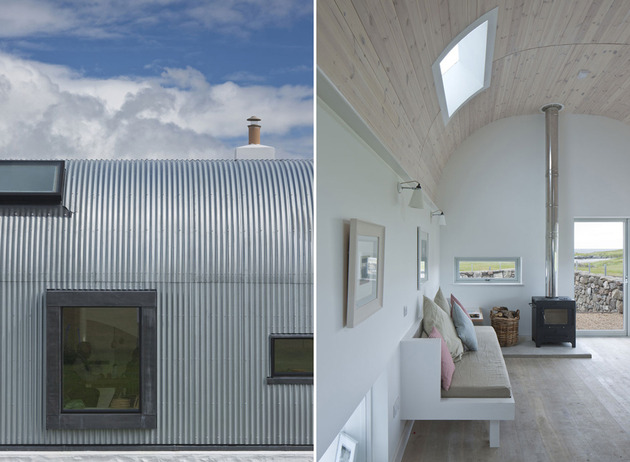 Addressing noise and design concerns, the inside of each aluminum sheet of the modern structure is insulated and covered with pleasant, common interior finishes. 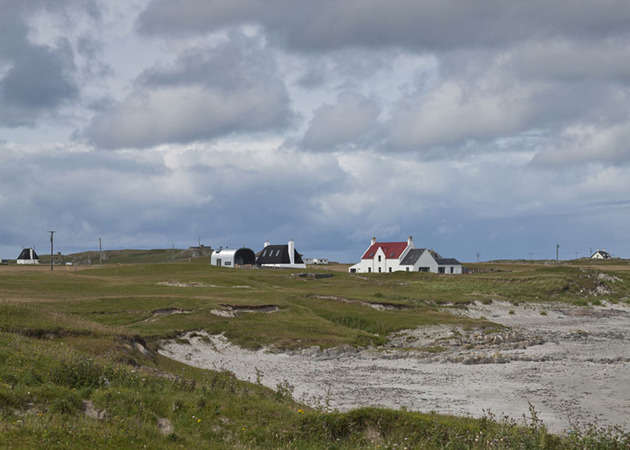 From afar, the traditional roof and chimney style of the stone building help the home blend in with its Scottish countryside surroundings. 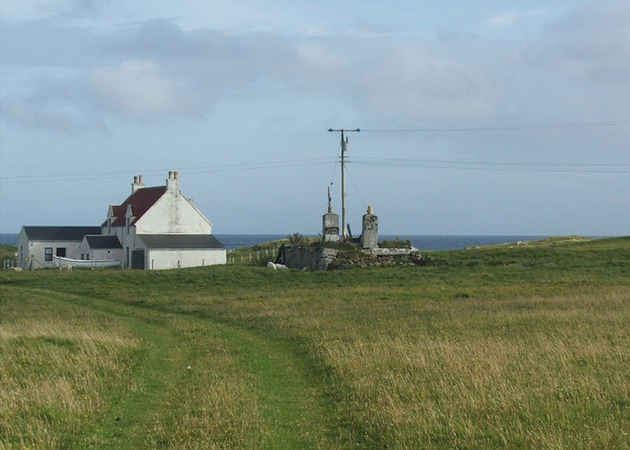 The central design of the traditional cottage part of the house is based on a cottage that once stood on the property, upon the ruins of which the new dwelling was built.
Denizen Works 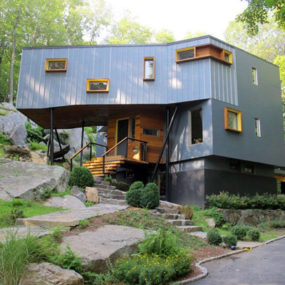 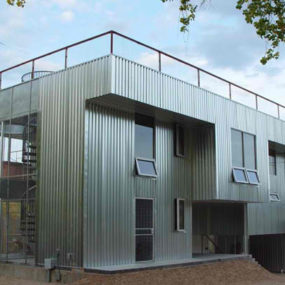 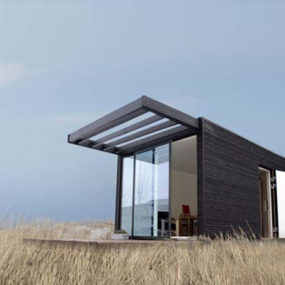