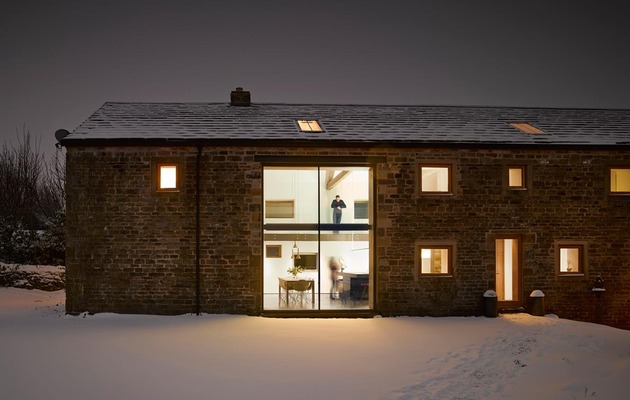 Snook Architects recreated a grade II 16th century brick barn located in Yorkshire, England into a modern open plan home called Cat Hill Barn. In order for the architects to win the approval of the local planning officer, they presented a restrained aesthetic that worked with the original structure of the building. The original brick façade was maintained as where the impressive trusses now holding up a new roof. 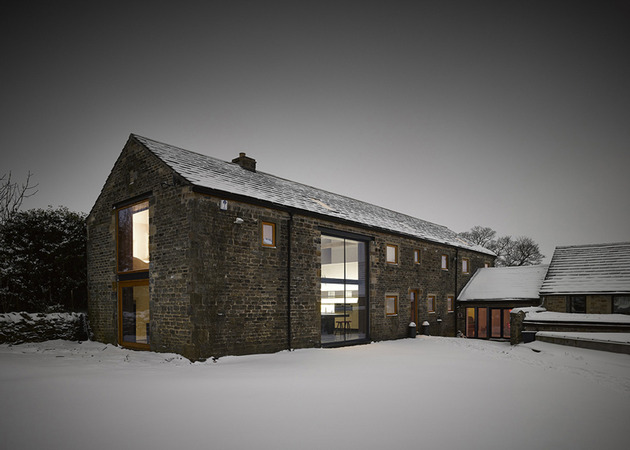 With its original and patina’d brick facade the home settles into the rolling hills surrounding it with a historic appeal that belies the modern comforts within. Even the central chimney stack does not give away the contemporary secret. 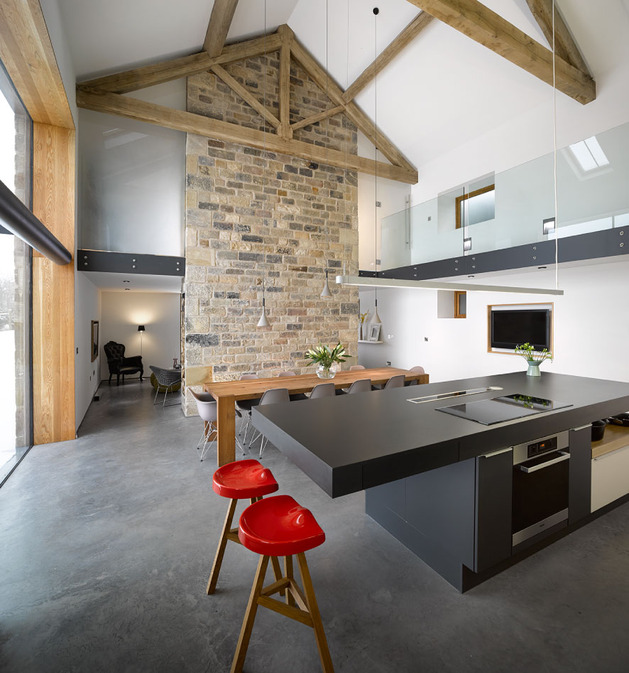 It is not until you enter the home that the secrets of a crisp white interior and concrete floors are exposed. Layered onto this are the line of horizontal bracing on the mezzanine glass rail system and the sleek geometry of the ultra modern kitchen. These 21st century details are pretty awesome on their own, but presented in the context of the exposed trusses and ancient bricks and the visual story is lifted to a whole new level of WOW. 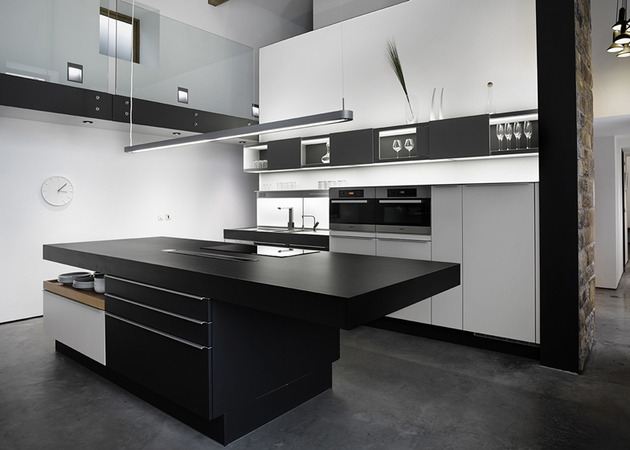 The geometric lines of the kitchen are stacked and staggered, alternating between hidden and exposed storage. The cook top vent is built into the counter to keep the linear lines of the cabinetry the main focus with the exception of the streamlined island pendant. 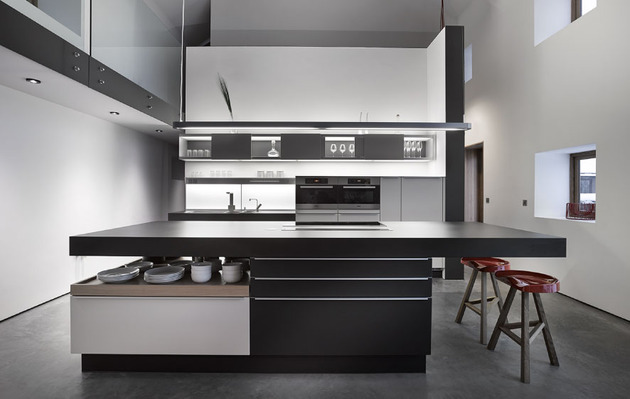 The architects chose to position the bar overhang to the side, this allows for easy storage access to the dining area from the back of the island. With long drawers and an exposed dish void, there is no need for a sideboard. 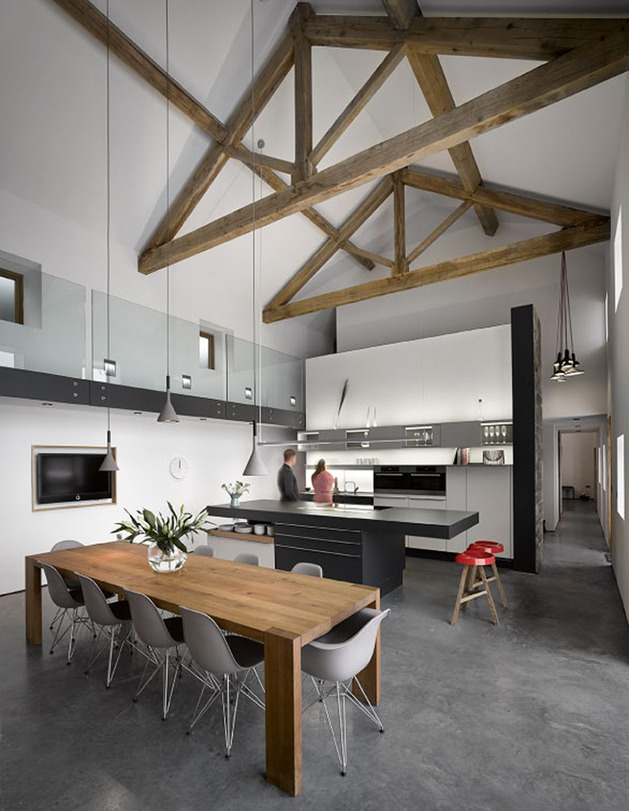 Had the cook-top vented out the ceiling of the kitchen, its silhouette would have competed with the sculptural lines of the exposed trusses and beams. 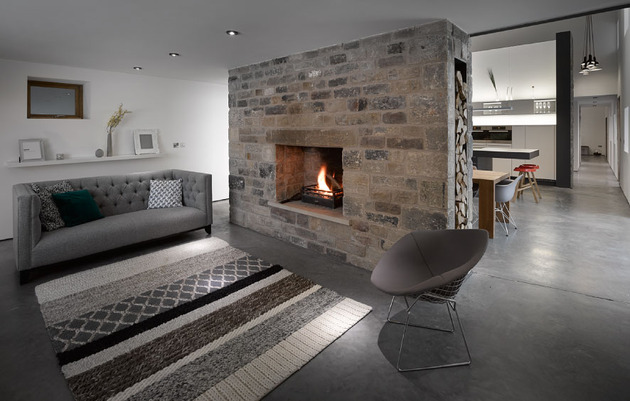 The brick peninsula that divides the dining zone from the living room switches from a double volume height to a single volume as the ceiling drops down to create a more intimate space for the social zone. Here the wall of bricks presents both a wood niche on the side and a large, cozy fireplace on the front. 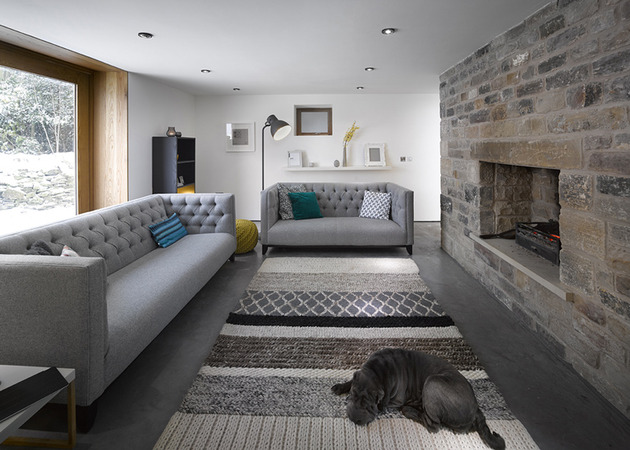 The furnishings are all kept to shades of grey to tie in with the concrete floor and act as a “cold” foil to the warmth of the bricks and trusses. Pops of yellows and blues continue the cold/hot colour story while a woven rug brings in another layer of texture. 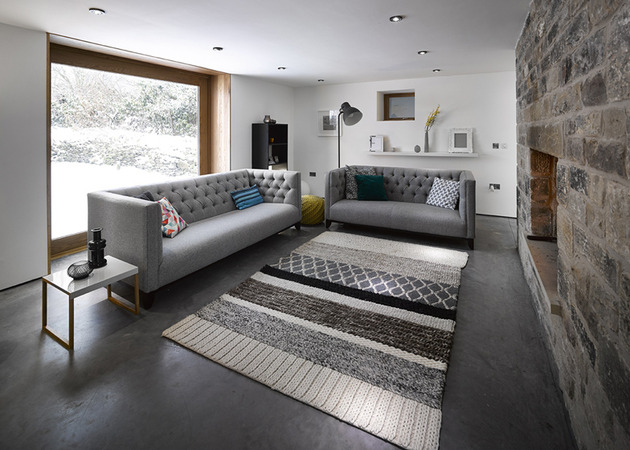 The large window keeps the living room feeling spacious while the high backed tufted couches adds in the cozy factor. Even with the snow outside you just know that curling up on one of these sofas in front of the fire would be peaceful and serine way to spend a lazy day. 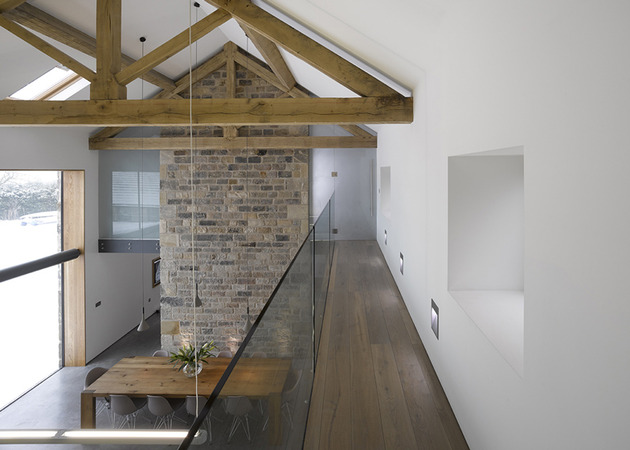 Upstairs a hallway mezzanine runs the length of the kitchen and dining areas before turning into the private zones of the home. With the tempered glass rail system the mezzanine offers an invisible silhouette to the floor below. The glass panels also allow the light from the window glazings to flood the. When the sun goes down, recessed wall fixtures light the way. 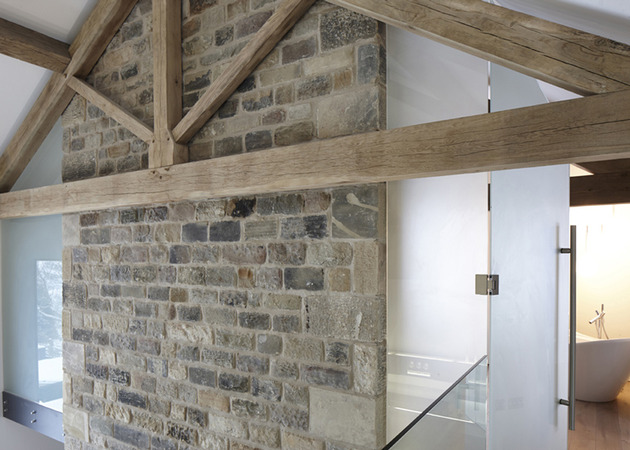 there is something magical about aged wood and bricks, one can only imagine the story’s these centuries old features have witnessed. It makes you pause and think. 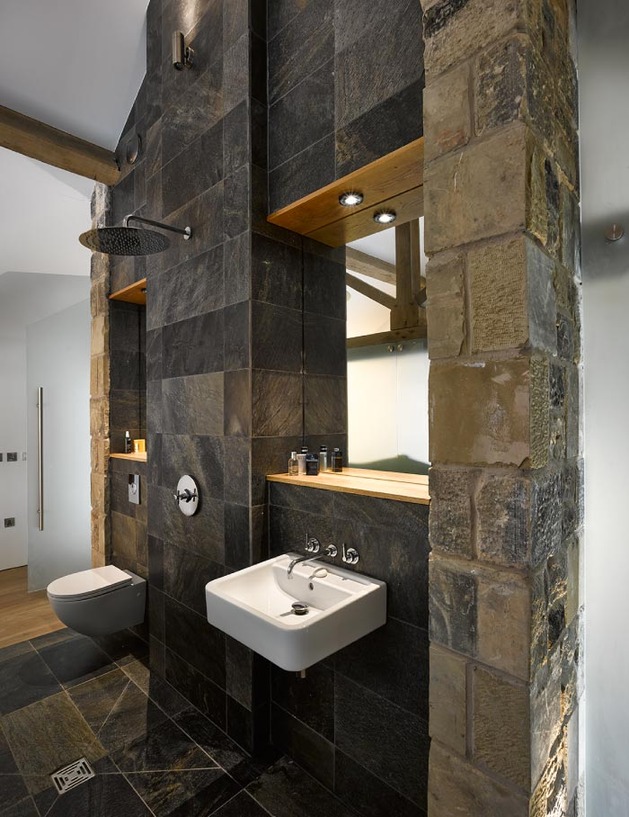 While the kitchen presented a sleek and streamlined modern aesthetic, the bathroom has a more organic and rustic appeal with its generous use of slate tiles. The combination of the slate, wood and brick textures offers a Zen atmosphere complimented by the open rain shower. 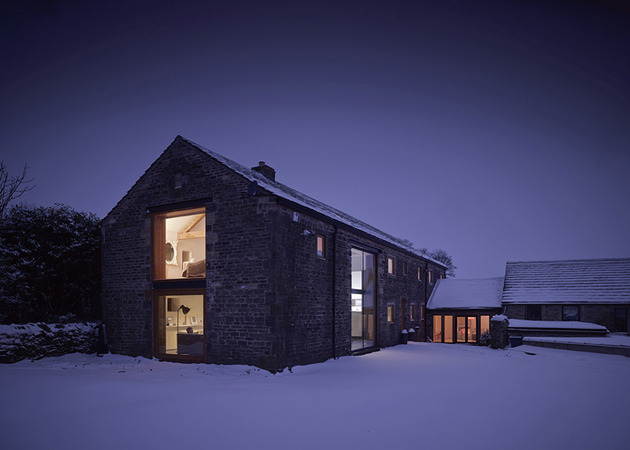 The architects only received approval for this project on an appeal. Key to winning the support of the appeal officer was the restrained aesthetic that allowed the original scale of the barn to shine through via the double volume spaces, open floor plan and hilighted trusses and brickwork. After much determination and hard work the project was realized and went on to win an RIBA award in both the regional category and the small projects category.
Snook Architects 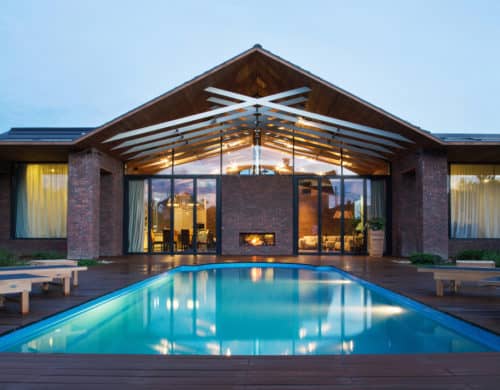 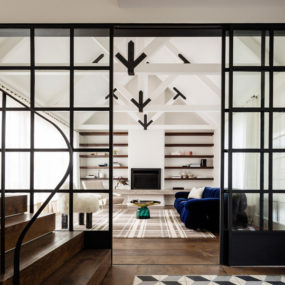 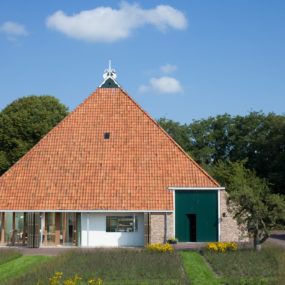