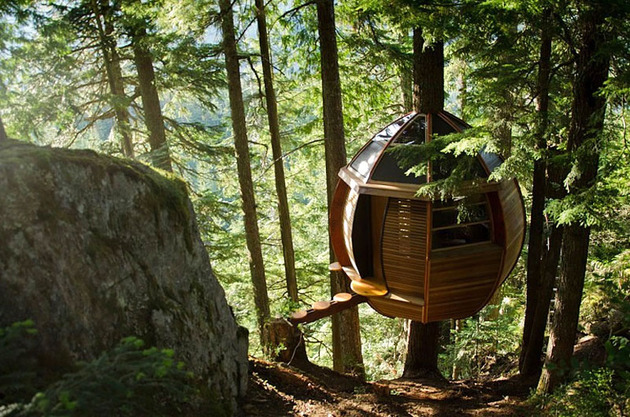 Built far from the nearest road or house, this capsule-like cabin in British Columbia is the result of its builder’s personal journey from riches to rags. Intending to retire early from a lucrative job in tech, Joel Allen found it harder than he envisioned and returned to the workforce in a completely different field: carpentry. Having found a new passion, he embarked on a years-long after-hours project to build a compact, livable cabin far away from modern life. Perched partway up a tall hemlock tree, Allen’s creation is a beautifully creative getaway, a man-made dwelling that doesn’t seem out of place in the forest. The building of the little house also furthered his carpentry skills, and is a remarkable achievement for somebody who had little carpentry experience before beginning work. 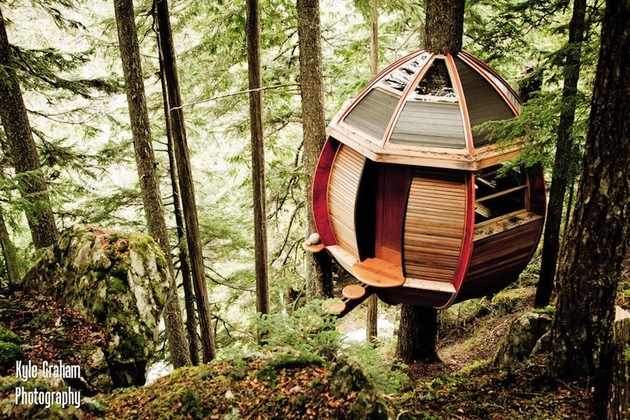 The HemLoft, as its creator calls it, is built around the trunk of a hemlock tree on a sloping rocky hillside in the woods of Whistler, Canada. Taking on a vaguely egg-like shape, the little structure is actually serviceable as a hiker’s shelter or short-term home. 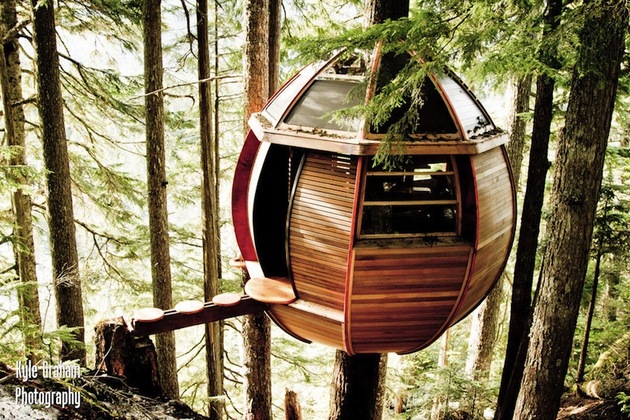 The cabin was built on public nature park lands, so technically nobody has true ownership of it. Since it’s quite remote, however, only its builder and his girlfriend have stayed in it so far. 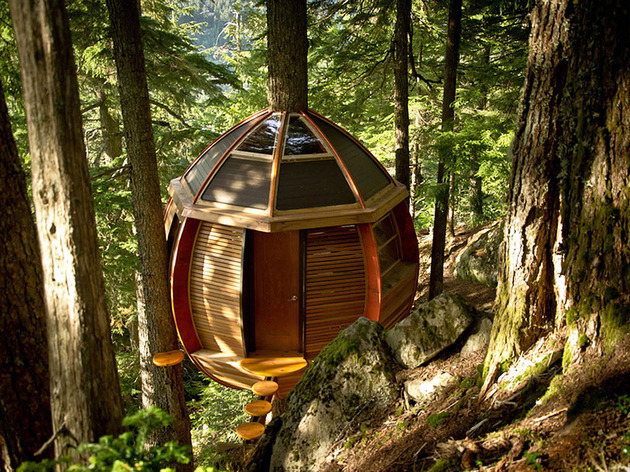 The capsule’s structure is entirely wood of many varieties, showcasing the talents of its carpenter builder. Intelligent solutions were found to distribute the weight of the dwelling and support it safely up the trunk of its host tree.

The HemLoft’s entrance is across a suspended path made from wooden planks and circular platters, an impressive yet lighthearted structure pointing out from the cabin’s inset door. 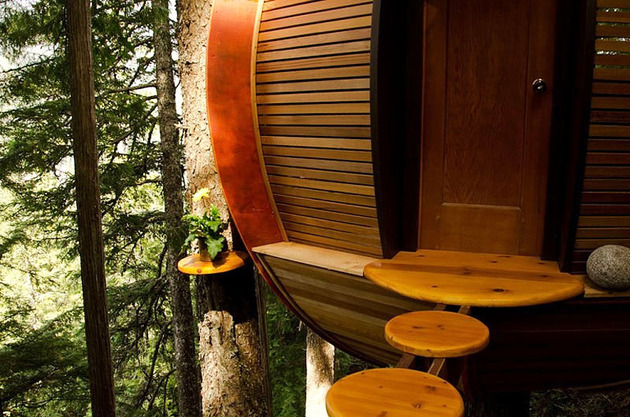 Various little artistic touches finish the residence and give it a cozy overall appeal. Found stones perch on shelves next to the porch, and flowerpots are installed on nearby trees with wooden plates. 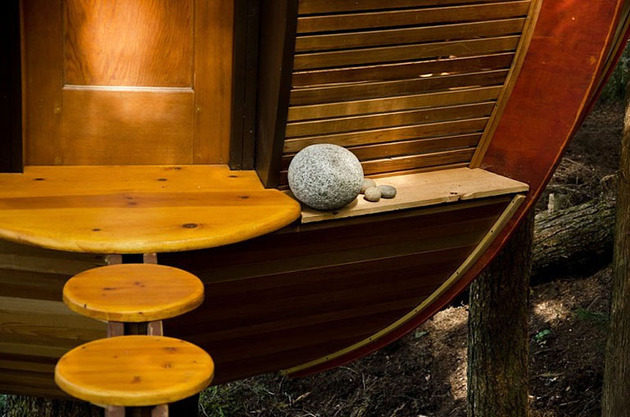 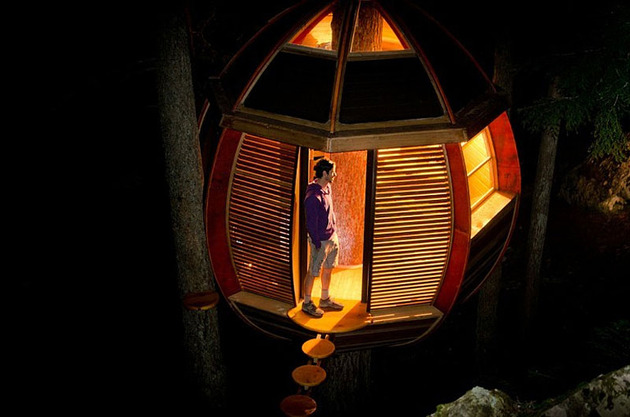 By night, the HemLoft is a beacon of warmth in the mostly deserted federally-owned woods of British Columbia. It’s a steep five-minute hike from the nearest road, and even farther from the closest private home. 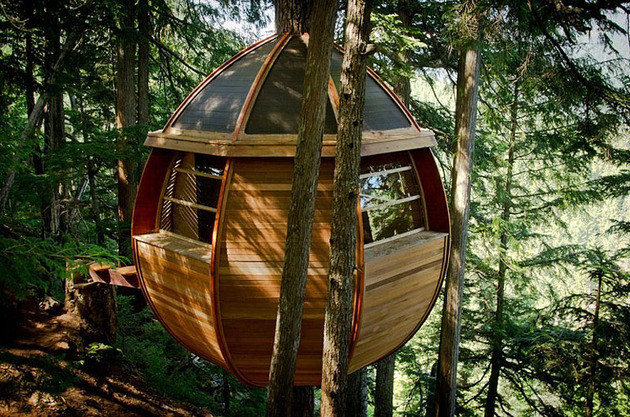 The cottage’s large windows, thin profile, and elevation above the ground combine to provide stunning views of the surrounding landscape in every direction. 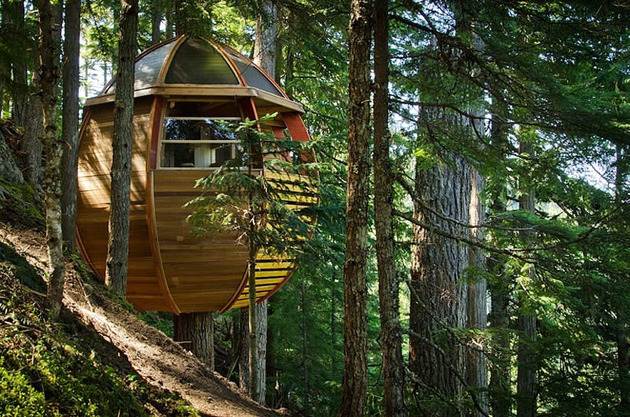 The varied wood finishes and patterns may look like part of an intentional design scheme, but they really were borne of necessity. Most of the materials for the project were scavenged from construction sites or picked up off the “free” section of Craigslist, and then were arranged in the most presentable way possible. 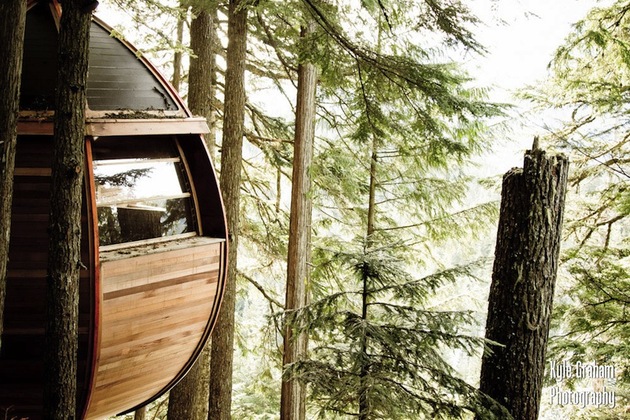 Plenty of thought was put into the physical design of the cabin, however; much of its structure was planned out in advance via 3D computer modeling. Certain details make this clear, like the roof lip set over the window to keep the elements out. 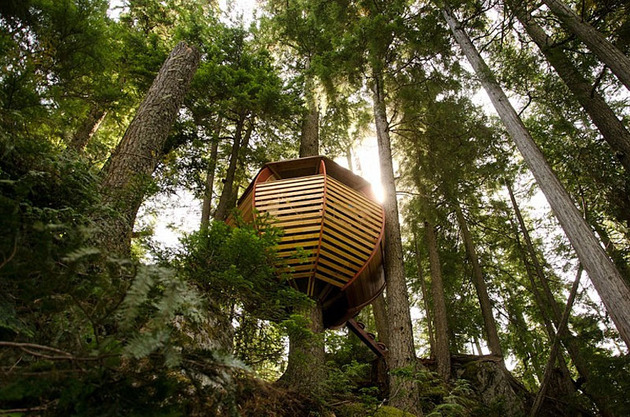 Most of the sections of the dwelling which aren’t used as interior walls, such as this deck railing near cooking facilities, are done in a pattern of spaced, straight wood planks instead of the more labor-intensive and costly curved wood used elsewhere. 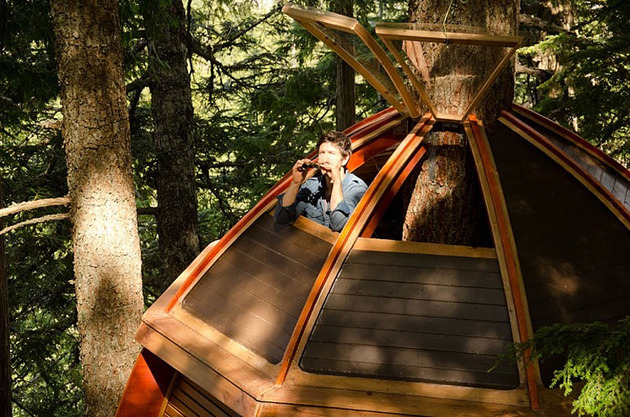 Transparent panels in the ceiling are hinged to open towards the tree trunk, providing a creative lookout point for those living inside. By night, the same panels provide unobstructed upward views when closed. 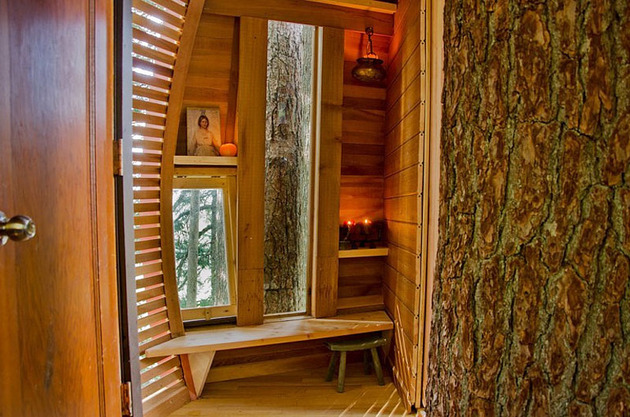 Inside, the little house is defined by a circular arrangement and combination of spaces. The entrance room serves as a hallway, office, and mud room. Sunlight enters through each room’s windows as well as the slatted wood used selectively. 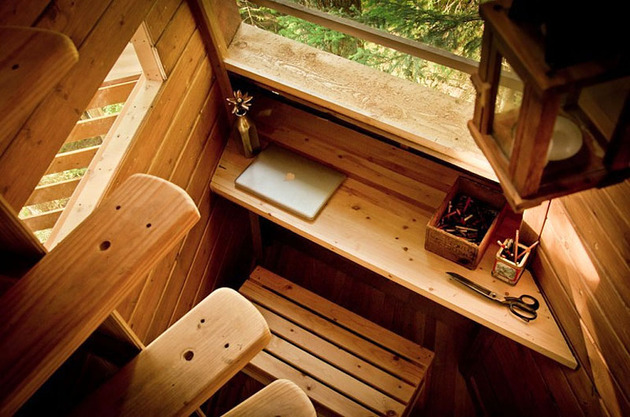 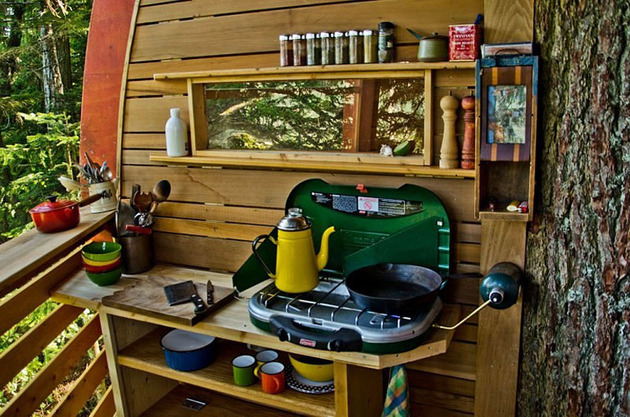 A deck cut out in one corner of the compact dwelling serves as living space on good weather days and also contains a designated cooking area. 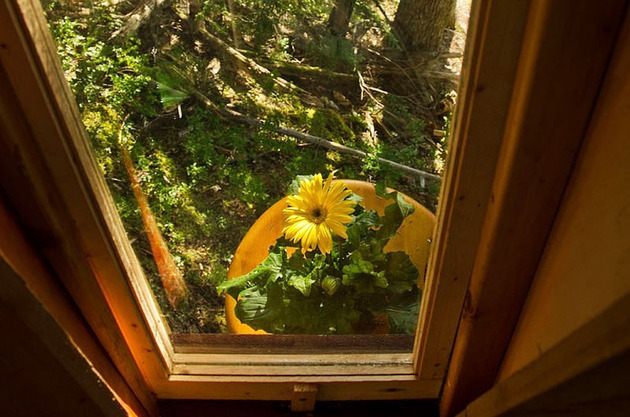 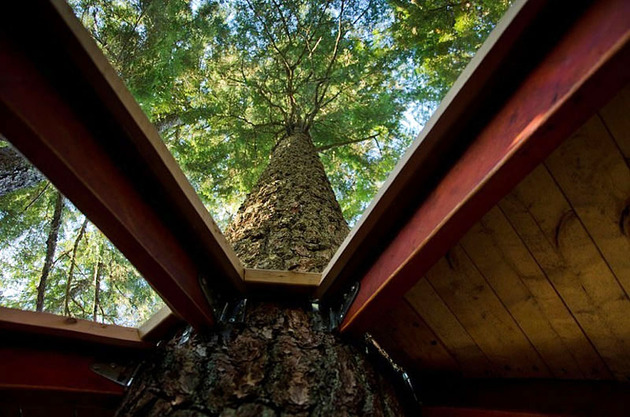 A glance upward from most of the HemLoft’s rooms reveals the tough, towering tree upon which its structure is based and the embedded metal fasteners used to tie the whole pod together.
The HemLoft
Photo credit: Kyle Graham Photography 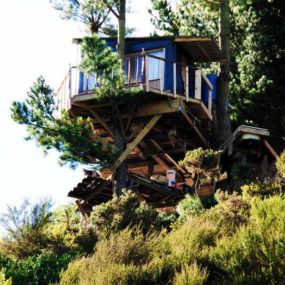 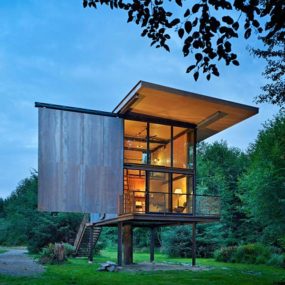 Steel Cabin Design in the Woods 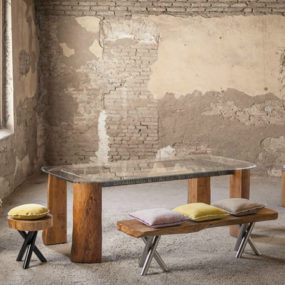 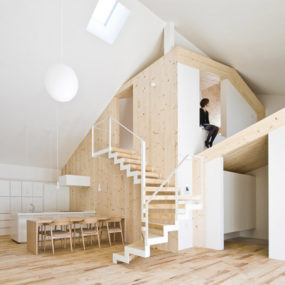 Wooden Structure House: hang out on the roof … inside the house 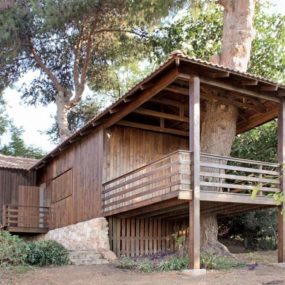 Steel Cabin Design in the Woods

Wooden Structure House: hang out on the roof … inside the house