Modern Interior Shutters for Each and Every Room

Window treatments are a great way to jazz up your interior. Curtains, blinds, screens and various other window treatments can bring a pop of color to the room and dress it up. Modern interior shutters, however, are more functional as they can block out the light and noise-proof your home. And their designs vary greatly especially when it comes to custom shutters. They come in different materials too, bringing a fresh touch to your typical wooden frame windows.

Interior shutters are also more practical as far as maintenance is concerned. Just wipe them off with a damp cloth once in a while. No need to take them off to do the laundry or use any special cleaning method.

Natural wood shutters are a classic. They can be used in any traditional or modern interior and offer a lot of choice in terms of finish and color. They bring warmth to interior creating an inviting atmosphere. They are also quite easy to clean. Some might look a little dated, but if you are after the old-fashioned aesthetic they will do great.

Another great thing about having natural wood shutters inside is that the weather conditions don’t wear them down a bit. All you need to take care about is dust and probably grease in the kitchen. Wipe them regularly and they will serve you for years.

Shutters also come in a variety of sizes. For instance, plantation shutters are much wider than the regular ones and can fit well with your sliding glass doors. Use them to increase privacy and break the indoor/outdoor feel whenever you want to cocoon. When partially shut they also create beautiful sunlight patterns on walls and floors.

Some people use the plantation shutters to screen their porch. This is a great idea if you want to lounge just outside your house without worrying too much about privacy.

As with everything these days, shutters can be reimagined to fit with modern interior architecture. Tall shutters can be used to close those double height windows. And since it can be hard to choose the right window treatments for those windows such shutters make a perfect alternative.

The only issue with such big shutters could be their weight. Closing and opening them would seem like a high-effort task, but there are always solutions. Plastic, lightweight wood or MDF shutters can give you the same look without making you work out each time you want to close or open them.

If you think that only curtains or fabric blinds can bring a pop of color to your interior, here are some colorfully painted shutters to change your mind. Pink is this year’s color and can make a nice accent in the kitchen or bedroom. This candy hue works really well with grey and taupe.

Bright shutters can help you create a focus in the room. It helps if you have a single big window, around which you would like to set up your furnishings.

Blue also happens to be a color of the year. It goes really well with white, creating a nautical atmosphere in the interior. These blue shutters that cover only the bottom half of the window are simply made for the bathroom.

If you get tired of the color though you can always repaint your shutters. It’s also a great way to give your room a quick makeover.

Bright shutters and white frames make a beautiful contrast, especially when echoed by bedding. Although they are painted the same color as the walls the white frame helps them to stand out in a beautiful way.

Bay windows, by the way, are perfect for these kinds of shutters. In a bedroom they can be closed shut if you like to sleep in or filter out all the outside noise.

Bright yellow shutters are very fitting for the kid’s room, especially as the color is repeating in wall paint. The stark contrast between neutral white and bright yellow is very fitting with these types of rooms.

It also seems like a great idea for dressing up a white interior. A bright window makes for an unexpected and fresh accent. Use it once and it will look completely unique.

There is never too much of anything, when you do it with style. Here the Roman-looking molding contrasts with the numerous shabby emerald and grass green shutters. It’s a shabby chic and yet somehow very modern look. Mixing styles is too a very modern approach to interior design.

The four big windows and small thin shutters are an unlikely combination and yet they make this bathroom look amazing.

Adding a contrasting accent to a white room always brings a punch to the interior. Modern black shutters and a matching home office set create a stark contrast here. It’s nothing new, but the black and white combination is a classic and works every time. The minimalist shutter and furniture design also makes this look so harmonious.

And, by the way, having shutters on a sunny side window next to your home office is definitely useful during noon hours. 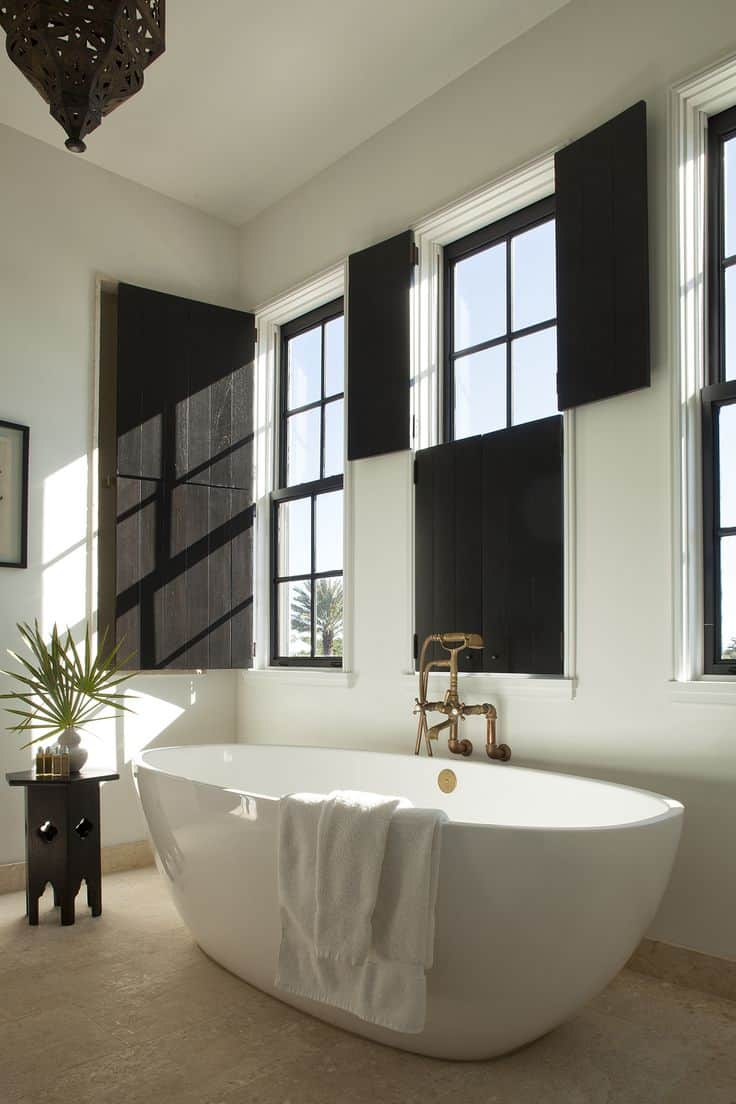 Double shutters are almost always a better choice for bigger windows. Sometimes you want a little privacy but also a bit of natural light. With double and folding shutters you can easily regulate that.

The contrast between the white walls and black shutters and window frames immediately makes the interior look more stylish.

Thin folding shutters allow just a crack of light to illuminate this monochromatic dark interior. Here all of the elements, including shutters and molding, are painted in grey-ish blue color creating a monochromatic look. Definitely a fresh idea for a library or a study.

The double folding shutters make a nice alternative to the balcony doors. In fact, shutters could replace some other interior doors.

In this modern interior the shutters are contrasting with the white color scheme, but understated grey makes them look very elegant. Sometimes the contrast doesn’t have to be strong to make an impact.

The best thing about neutral colors is that they work really well together and make countless combinations possible.

Installing shutters to cover only a certain portion of a window is a common practice these days. When these are closed the window looks simpler and more modern.

Bay windows often feature smaller frames that can use shutters for decoration. They won’t really be practical but the visual impact is undeniable.

Although many modern interior shutters come with built-in blinds, the solid minimalist folding shutters definitely catch the eye. Sure, they don’t allow for a more subtle light and air flow regulation, but they offer a different aesthetic.

Solid smooth panels are beautifully simple and the thin cracks between the folds let the light bleed through in a beautiful way.

Windows aren’t the only place where shutters can be used. This powder room has shutter doors that are typical for walk-in closets, only wider and simpler. When shut they probably give an impression of a closet.

Many modern homes have shutter doors between the rooms or as porch screens and even walls.

This house in Dnepropetrovsk, Russia by NOTT Design features shutters that aren’t necessarily practical but are most definitely decorative. The three slim black shutters contrast with the grey walls and a natural wood staircase, which makes for a very stylish look.

Architecture and window shape certainly plays big role in how the shutters will look. Here it’s notably different from what we usually see in housing.

These minimalist shutters by a Sydney firm Alexander&CO make for a great window solution for a kid’s room. The bottom folds are taller, which should make it harder for the little one to climb out. And the top ones are smaller and can be left open to let the air in.

The complete minimalism of the folds allows them to blend with the walls making for a very sleek look.

Bo Reudler Studio designed six small shutters for this Amsterdam home office interior with a peculiar style. Instead of going for the blinds or creating simple solid panels the designers put small cracks into them to allow some light in even when the shutters are closed.

The unusual interior architecture dictated the look and the architects made it even more interesting.

Many brands are offering speciality shutters today to accommodate even the trickiest windows. But this design is definitely unique. The cracks in these mini shutters are very much in line with the interior style that plays with weird irregular lines and shapes.

If these windows were left without these shutters the visual impact would probably not be the same.

Red Pif restaurant and wine shop designed by Aulík Fišer Architekti features amazing custom shutters that look impressive when both open and closed. These can be seen from inside and outside the shop creating an amazing showcase all the while decorating the interior.

There is really nothing like custom shutters (or anything for that matter). The bottle shapes of the folds are arranged so that even when the shutters are closed some light can seep through. Their rotating mechanism is another thing that sets them apart from typical shutters.

Nettleton 199 house by SAOTA and OKHA Interiors features walnut shutters like you’ve probably never seen before. They separate the master bedroom from the living space. The rotating panels create a nice pattern when partially open.

Visible from the outside through the huge glazed walls the shutters’s intriguing pattern is the first thing that catches the eye in a minimalist modern home. 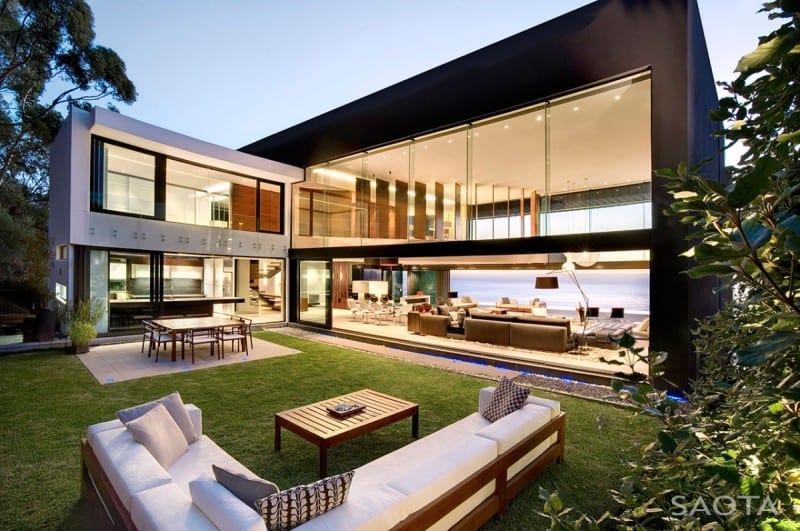 Modern interior shutters are numerous and different. If you can’t afford custom designs there is enough commercial product out there that will give you the look you’re after. And don’t forget it’s also a matter of how and where you use them. You can increase your exterior appeal with modern exterior shutters or use the classic design in an unexpected way. 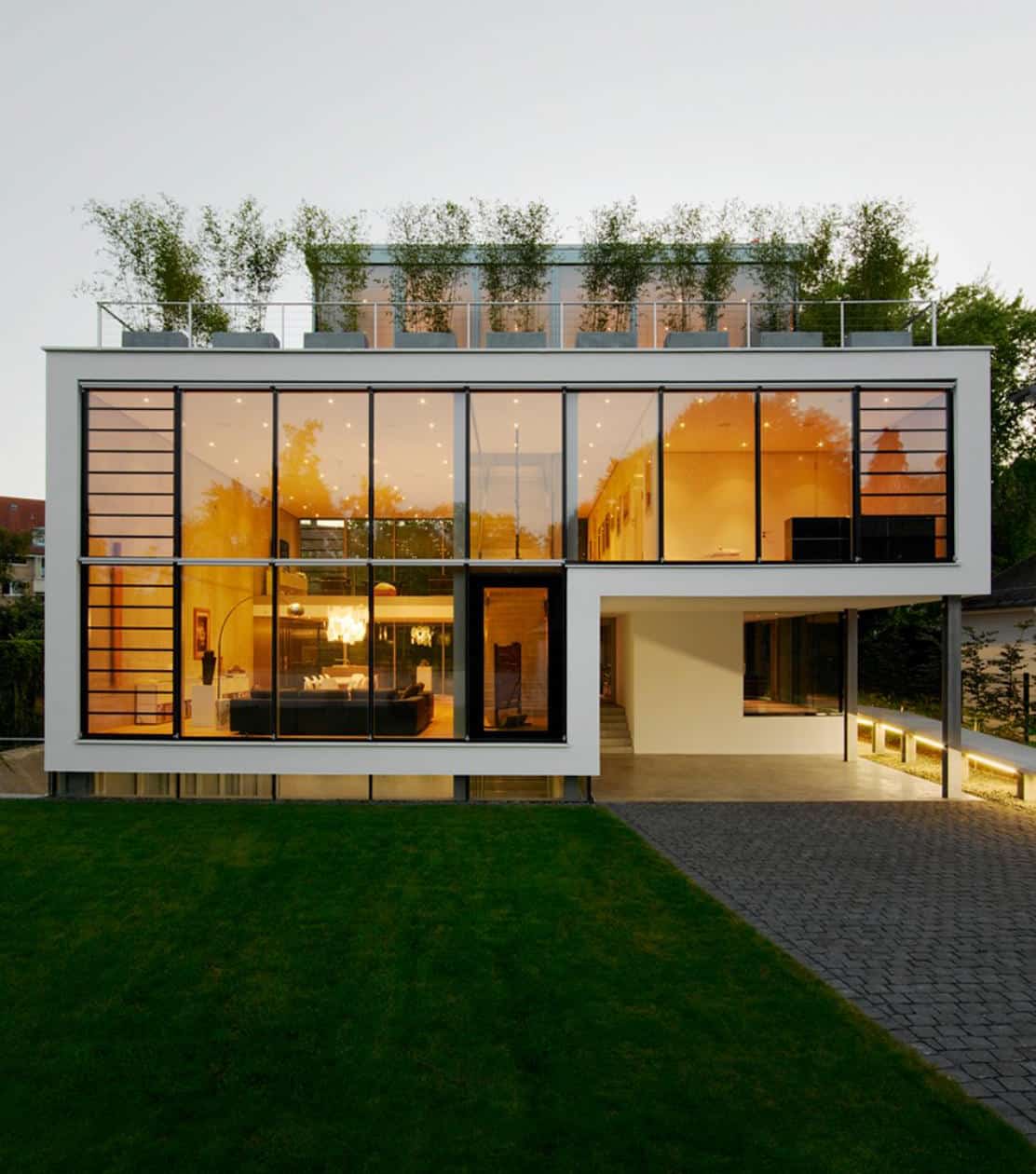 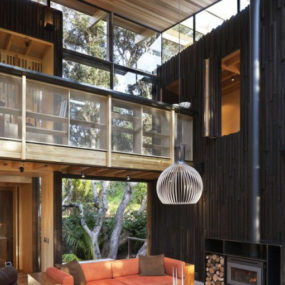 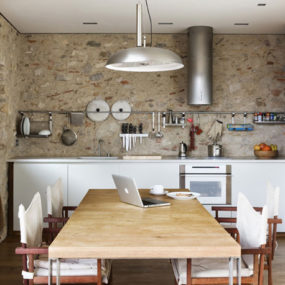 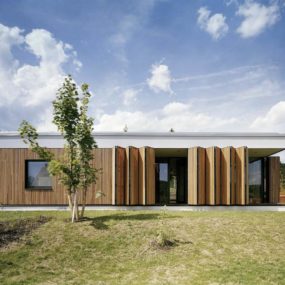 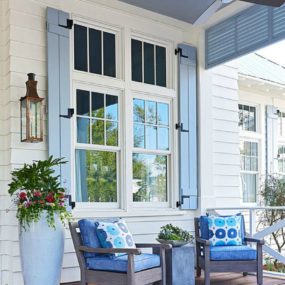 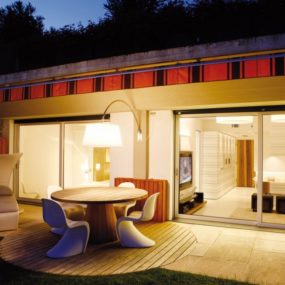 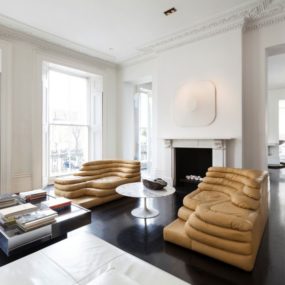 2 thoughts on “Modern Interior Shutters for Each and Every Room”