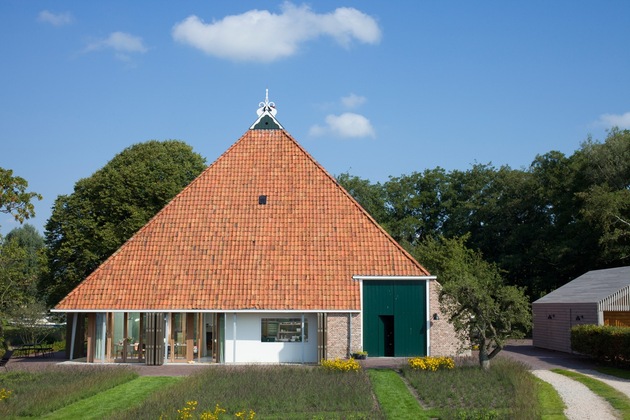 Located in a traditionally agricultural region of the Netherlands, this property was an active farm for centuries. The combined vision of a new owner and the firm of Jelle de Jong Architekten has helped to transform it into a group retreat, the original farm buildings holding completely modernized spaces within. The role of each building has been revised, with a former barn and stables now playing the property’s commanding role as its largest residence and event space. Throughout the land of the farm, new activities and recreational spaces have been added. Even so, the heritage of the property is a key element in its reinvention, and from afar it’s actually challenging to see anything different about it. While structural necessities have been fully addressed in the farm’s reinvention, the exterior appearance of each building has been kept as faithful to its original purpose as possible. 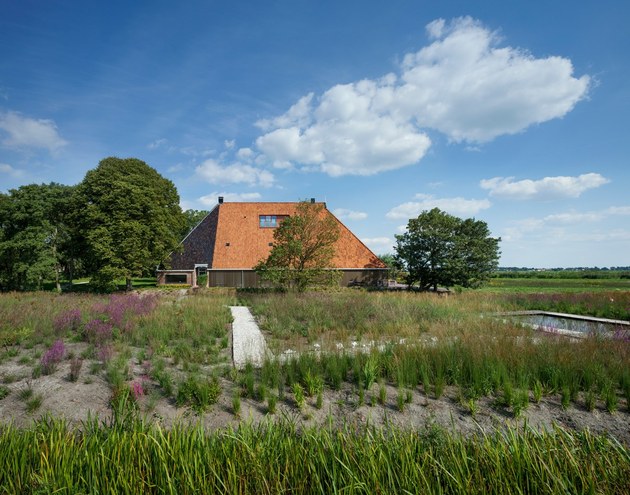 What was once the main home of the property is now split into two apartment-style residences, neither of which has a kitchen. Instead, meals on the former farm are prepared inside the barn, which now forms the center of the retreat. With such a large piece of flat land, the owners of the resort have spread a number of its new amenities on paths stemming from its buildings. Additionally, the solid brick walls of the main house have been substituted for structural columns and collapsible shutters, connecting indoor and outdoor space. 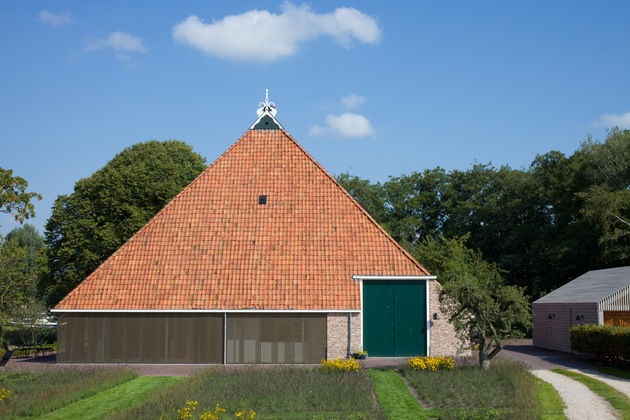 With the shutters all closed, the interior of the building is obscured to passers-by. Except for its bottommost portion, the former house appears almost as it did before the extensive renovations it underwent. 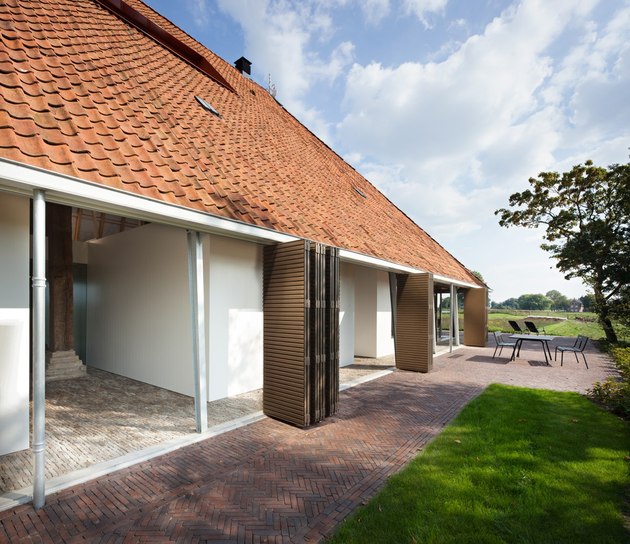 The shutters form an outer barrier for the two apartments, but are not fully impermeable and are not considered the actual walls of each suite. Instead, separate volumes within the building form its distinct rooms, with a shared indoor-outdoor space between them. 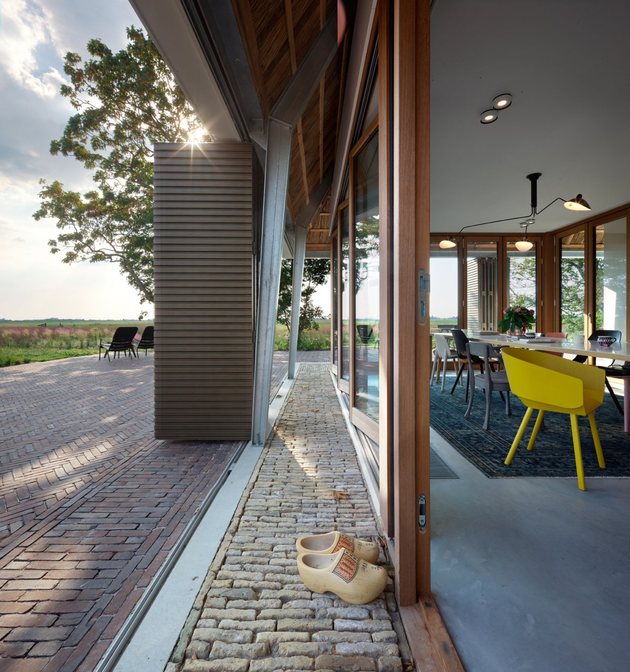 In some key public rooms, the solid inner walls of the building are replaced with glass window panels, which can be folded like the outer shutters to reveal the room to outdoor air. With those window walls fully closed and the shutters open, however, visitors can view the property around them while staying safely out of the elements. 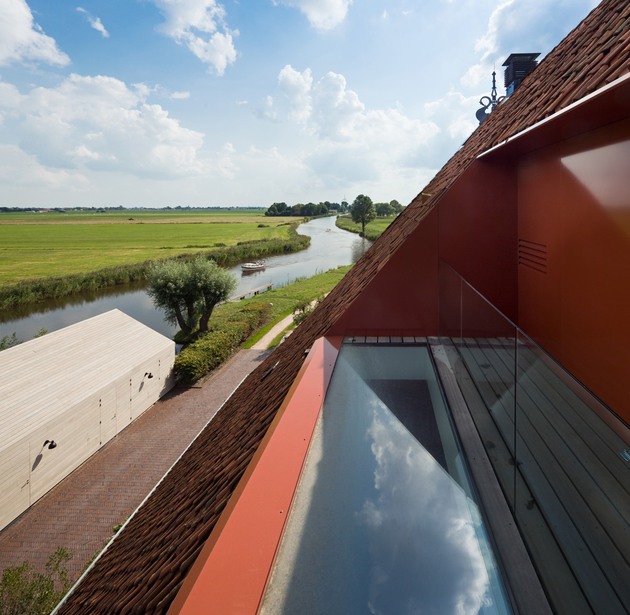 Built into the roof at the rear of the dual dwelling, a narrow deck gives view out over the river that runs next to the farm. Next to the floorboards and railings of the deck, a skylight lets the sun’s rays into the apartment below. 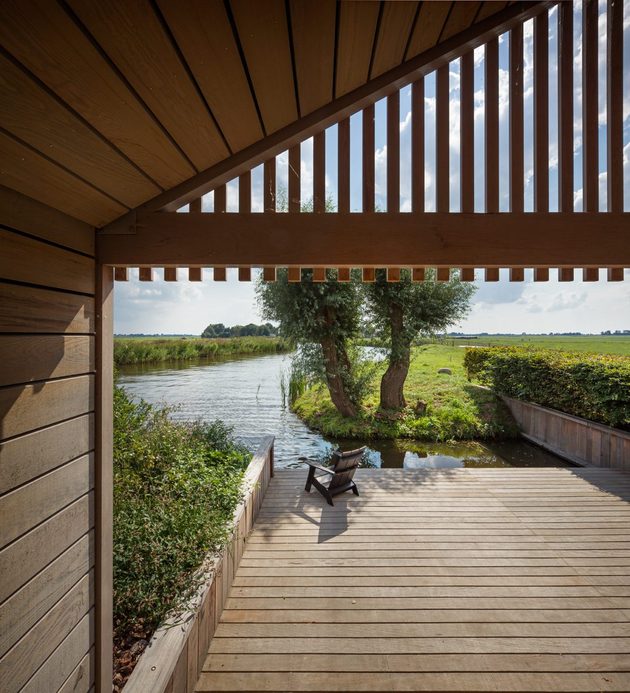 A former storage building at the river’s edge, once used for shipping goods in and out of the property, has been restored and re-made into a place of leisure and relaxation. 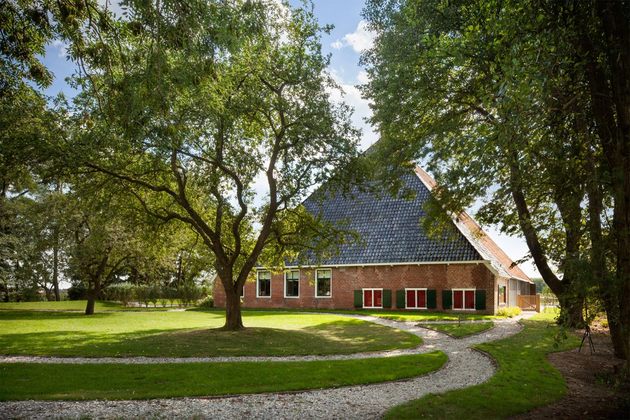 The largest building on the property, the former stables and barn now plays host to a large central residence, with space for up to ten people. It also contains a conference area, helping make the resort an option for corporate visits and retreats. 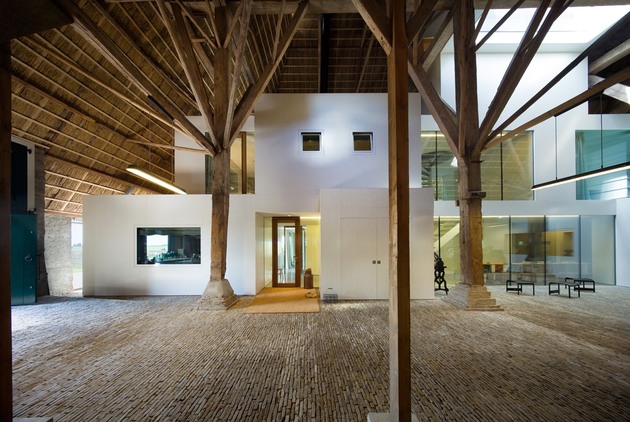 The entire original structure of the barn itself has been preserved, untouched, with a large geometric complex set carefully inside without actually interfering with the building acting as a canopy above it. 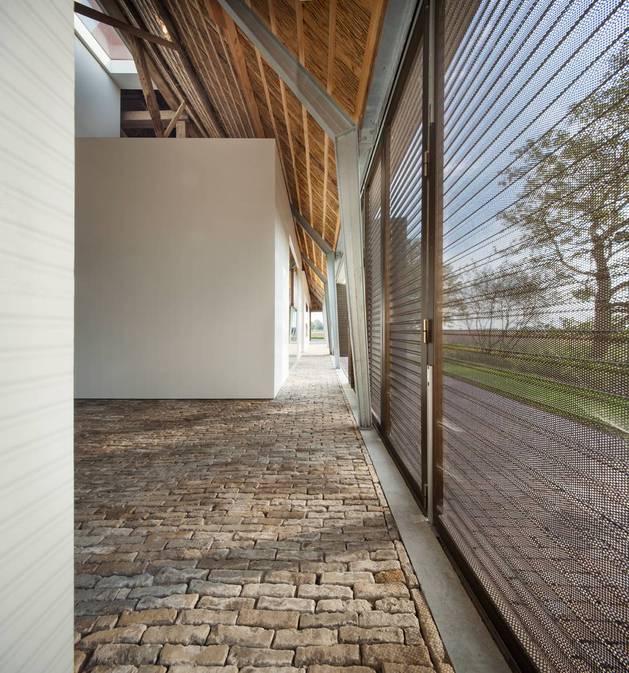 The few changes made to the expansive barn include the addition of skylights and the replacement of some of its wooden doors with retractable metal mesh pieces which allow the river’s breezes through. 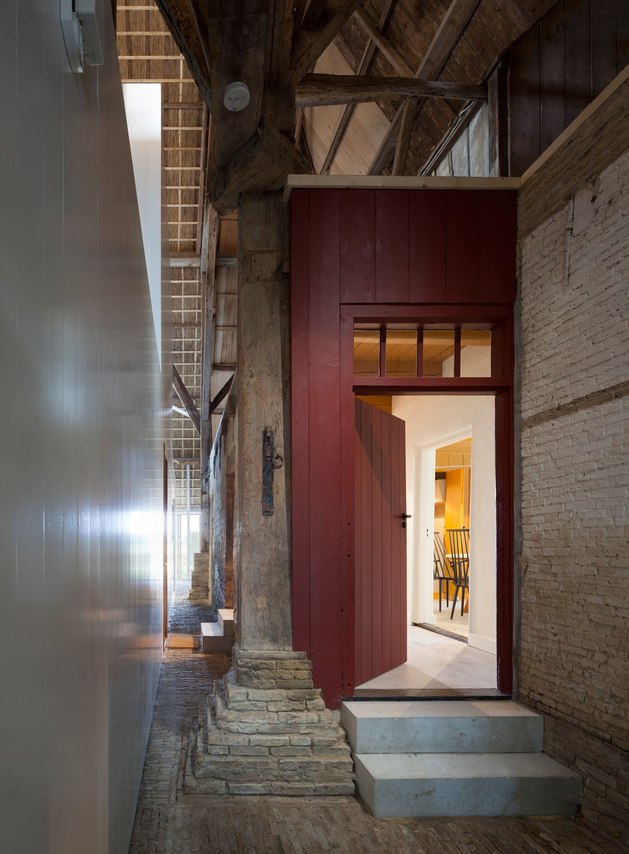 At certain points, antique and modern touches are beautifully combined. This doorway, one of the barn’s original components, leads to a clean contemporary foyer, passing on into the collective dining space for the whole property. 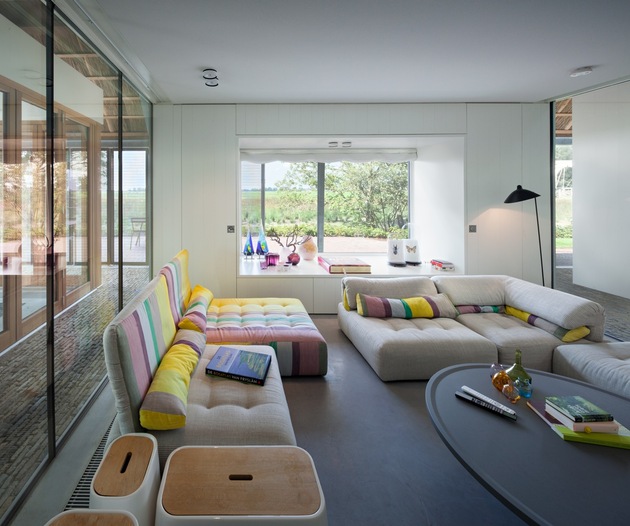 Inside the apartments and the main house decor is bright and cheerful, with great emphasis on a connection to the land around each building. Glass walls and large windows show centuries-old beams and flooring just beyond the indoor realm of smooth, present-day styles. 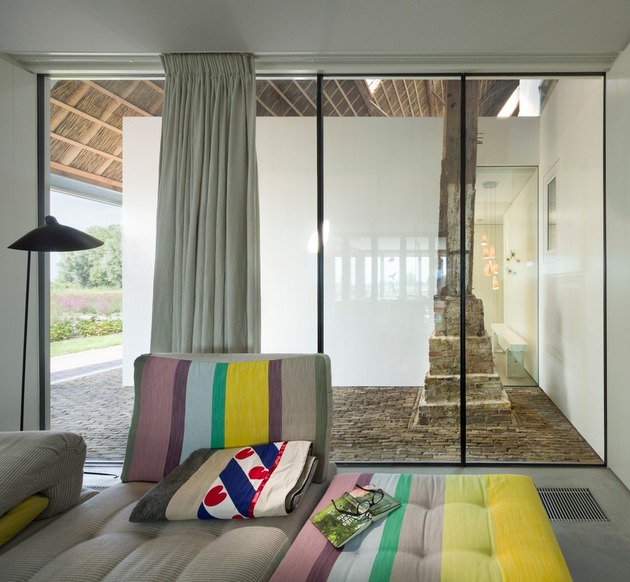 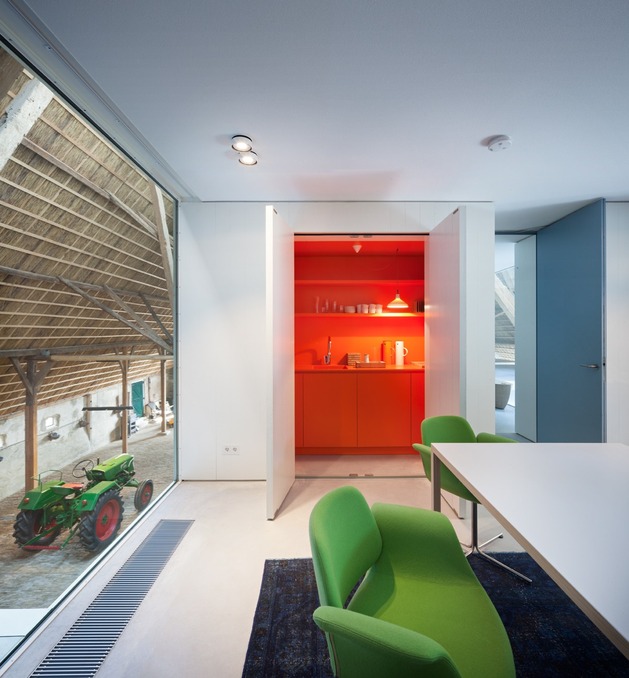 The big barn still has space left over along each edge of the lodge it contains, and that space is filled with gear from the property’s years as a working farm. One of the most impressive leftover objects is a classic farm tractor, visible from the office on the top floor.
Jelle de Jong Architekten 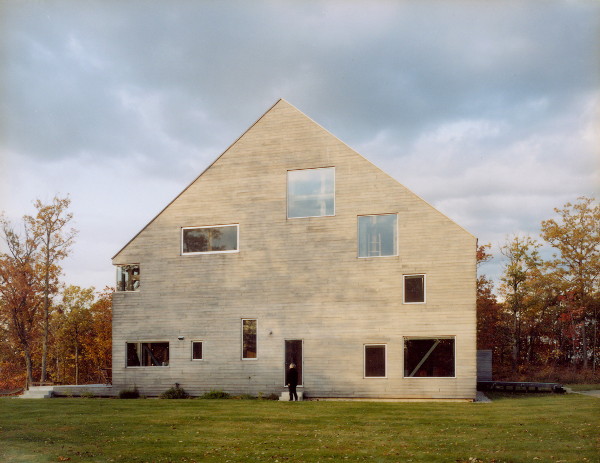 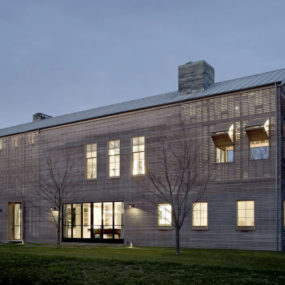 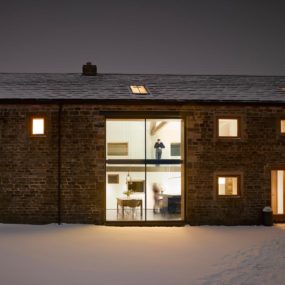