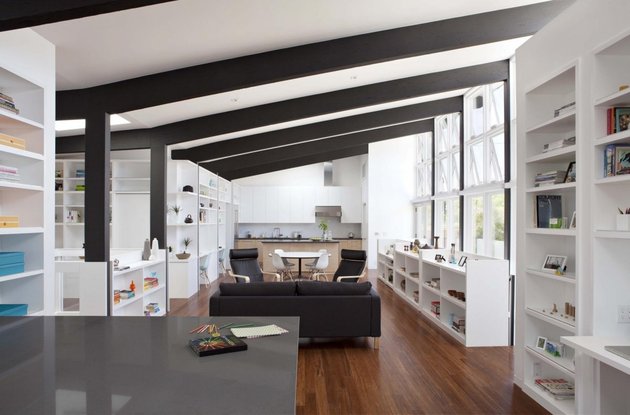 In the home territory of Apple, a house like this is exactly what you should expect. Called the Net-Zero Energy Modern House, this Klopf-designed home combines sleek style, intuitive functions, and ultra-efficient use of resources. Built with an unobtrusive exterior form on a wooded lot, the home tackles a one-story design limit and the goal of energy neutrality with grace and beauty, resulting in a spectacularly contemporary space that won’t anger neighbors in a neighborhood of low-slung, traditional-style homes.
The Net-Zero House had a number of distinct constraints facing its construction, all of which are taken care of in an uncompromised fashion. But what’s most striking about the home’s interior design is not those triumphs, but the sheer organizational wonder that covers nearly every wall. The house is awash with open shelving and drawers, storing everything from books to vases to cooking ingredients. The huge storage capacity of the walls themselves saves on closet space in a small lot, and distinguishes the home from many others of similar design values. 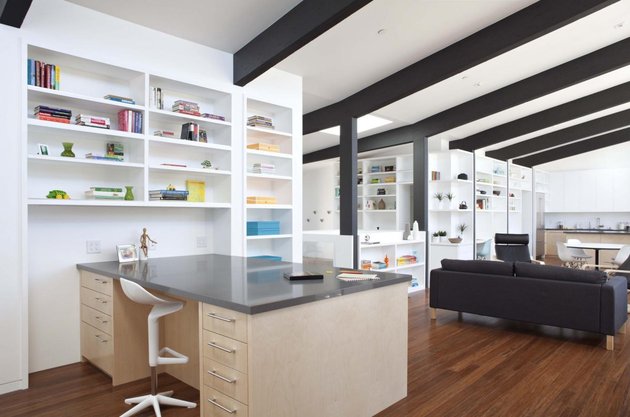 In Cupertino, the concept of eye-pleasing design is down to a science. Reflecting the consumer-tech economy of the surrounding area, the Net-Zero home’s fittings and furnishings all combine form and function in a harmonious hybrid. To augment the modern style, the house is entirely powered by a solar array on the roof to bring its living philosophy in line with its 21st-century looks. 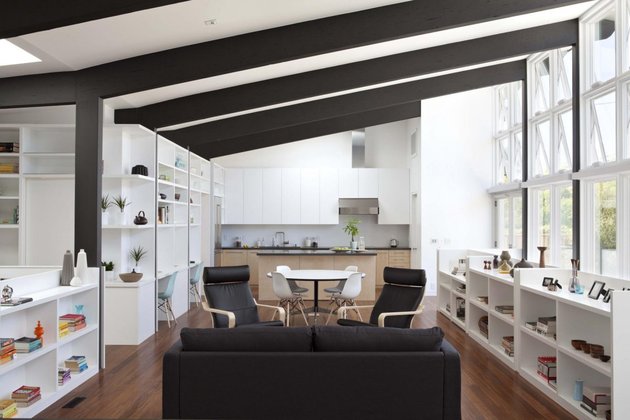 The principal living space of the home is one long combined living room, office, and kitchen, with other open offshoots to the side. In fact, there are very few traditional doors in the entire home, leaving the space interconnected through a grid of shelving with the vibe of an ultra-modern library or visual art office. 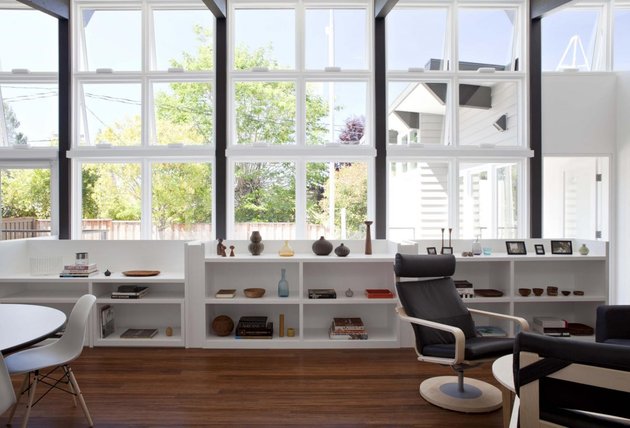 The view out the living room is serene, facing the back of the home’s lot towards a well-cared-for wooded yard. The living room’s windows are the largest in the house, facing north to avoid direct sunlight but remaining large enough to capture a natural glow all day long. 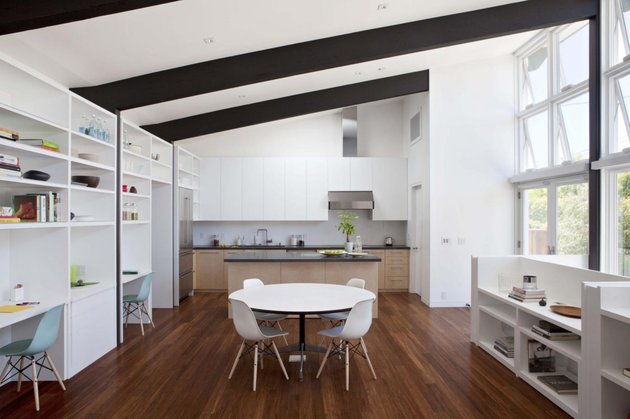 The kitchen and dining area are integrated subtly into the living room space, with nothing feeling out-of-place. This openness seems like a natural extension of the home’s design ethos instead of a compromise on space. 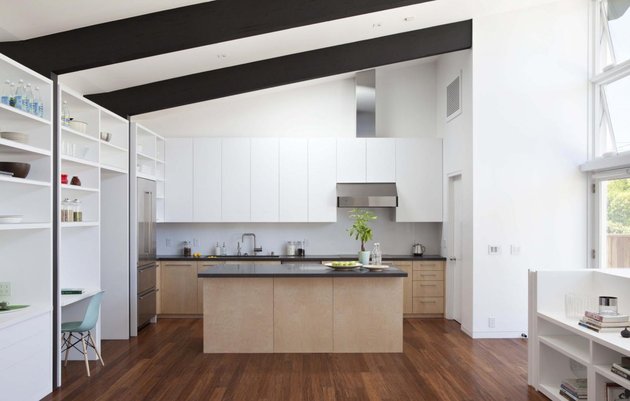 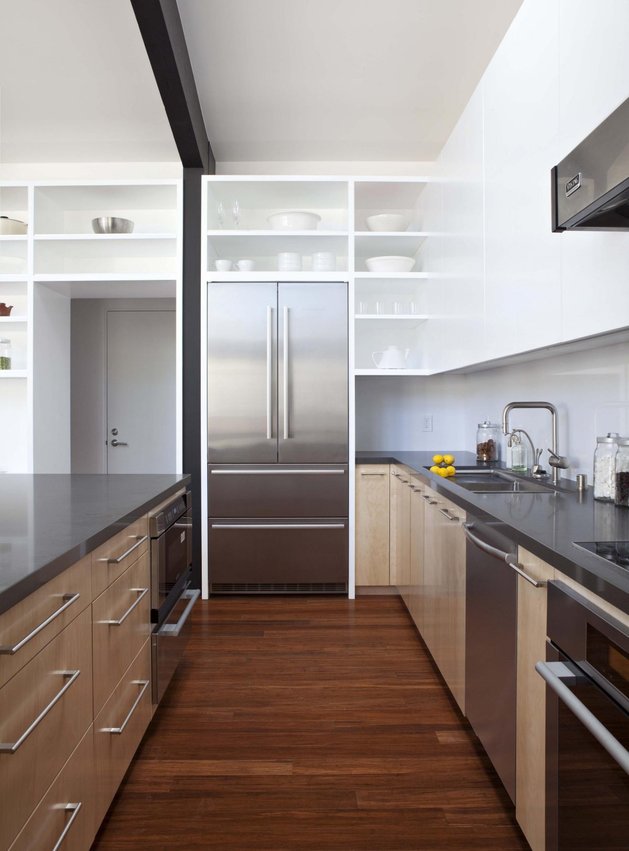 While the home may be exceptionally state-of-the-art, that doesn’t prevent it from being down-to-earth and usable on a daily basis. It’s a house meant to be lived in, so every appliance and object is intuitive and user-friendly. 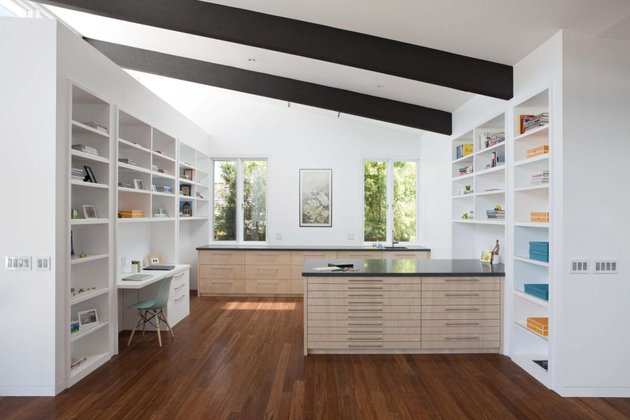 The business section of the home contains dozens of drawer tables reminiscent of architects’ drafting tables and storage. Any paperwork or small supplies, from business documents to drawings, could go here. 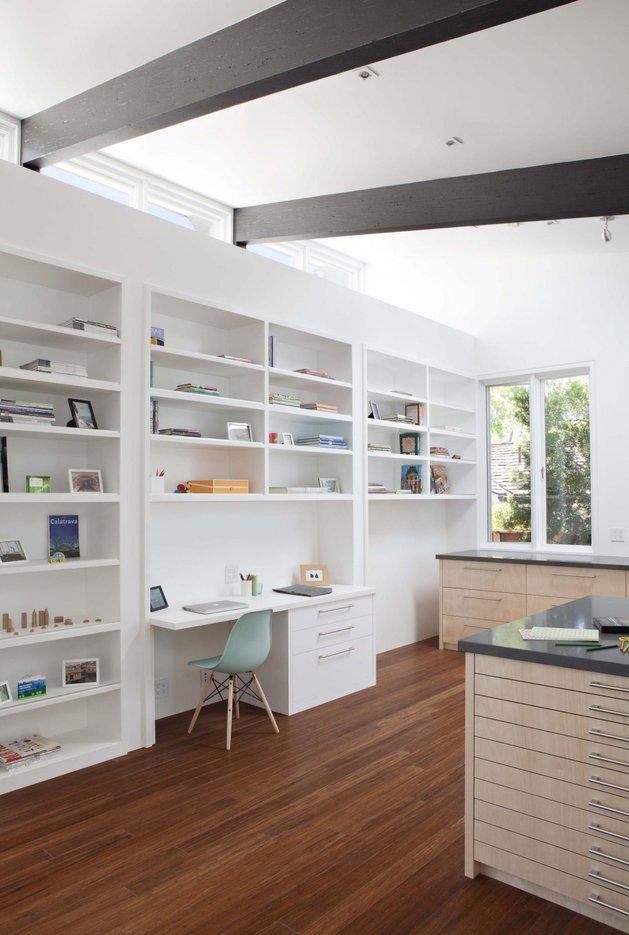 The home has a few areas set aside for computers, from the desk in the living room to the smaller unit shown here. 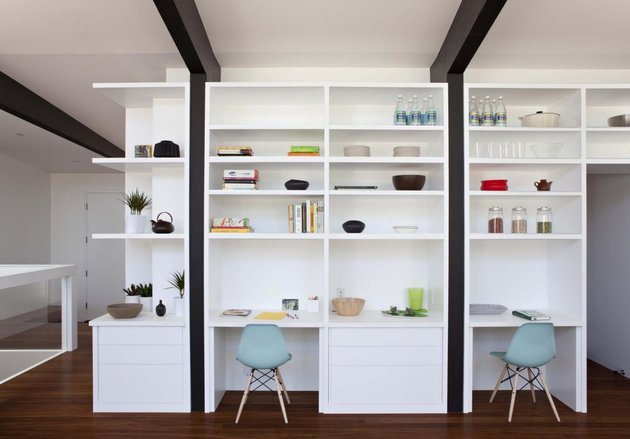 As you can tell, the entire home is awash in open-face shelving. While you wouldn’t store your most personal belongings there (that’s what drawers are for, after all), the shelves make a convenient space for decorations as well as for anything you might want to take out on short notice. 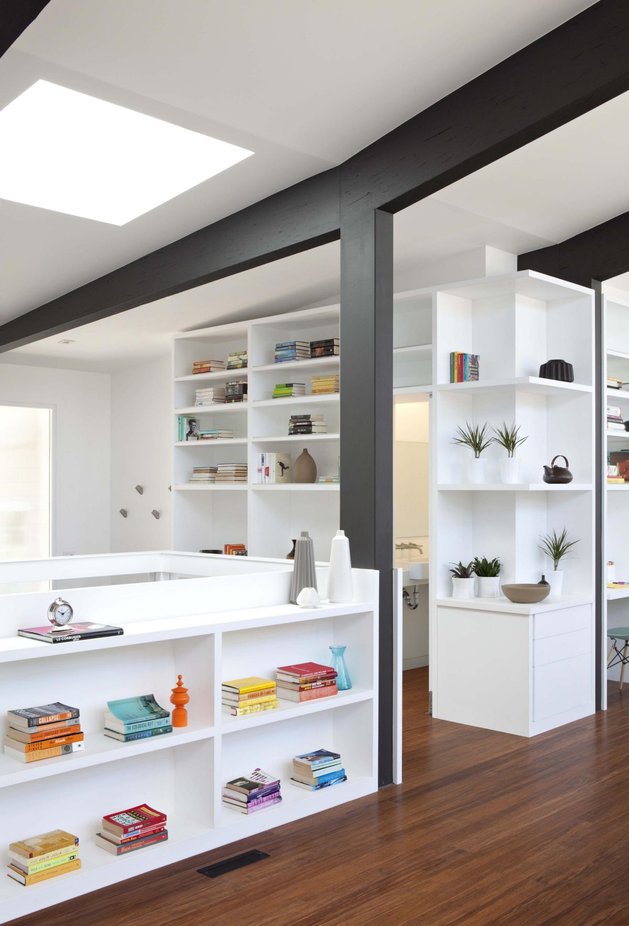 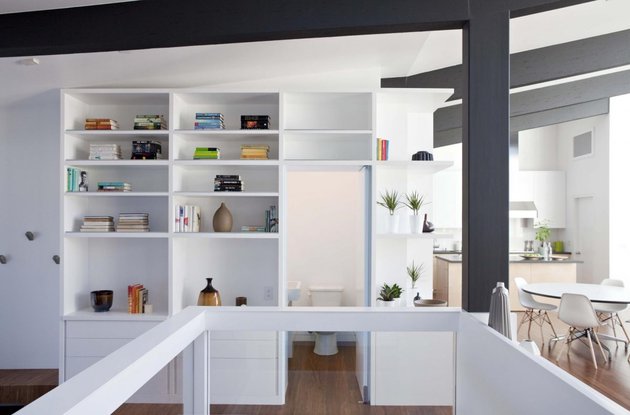 Built almost invisibly into a four-sided bank of shelves that borders the living room and the drawer room, a small bathroom is easily accessible from anywhere on the main floor while not jutting distractingly into the sleek space. 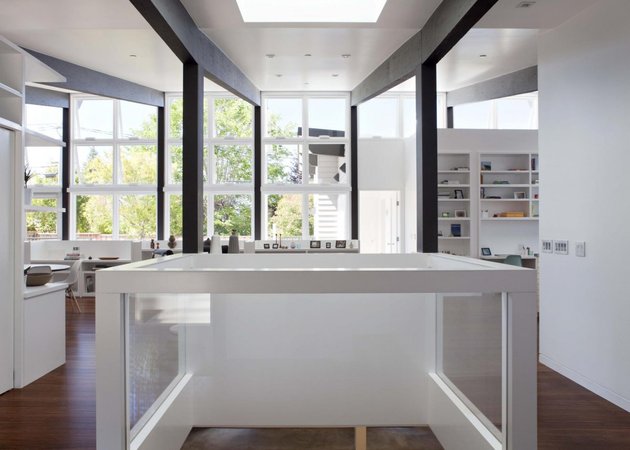 An installation in the middle of the main floor creates a hallway-type traffic flow path between parts of the home, as well as providing some more natural light to the space below the main level. 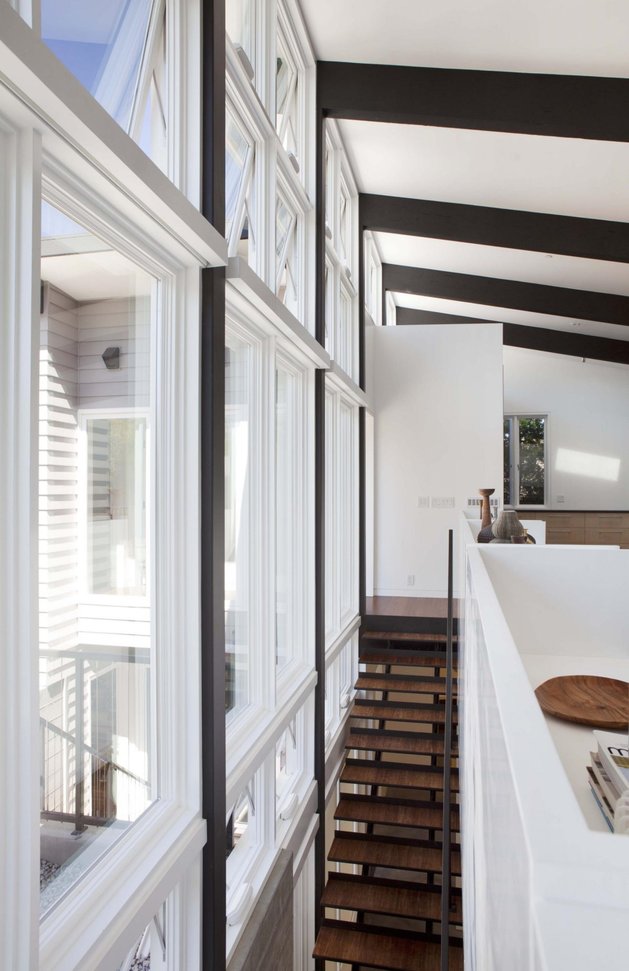 While technically a single story, Klopf carved out a reverse loft underneath the main home, keeping its entrances open and full of natural light so as to avoid the cramped “basement” feel. 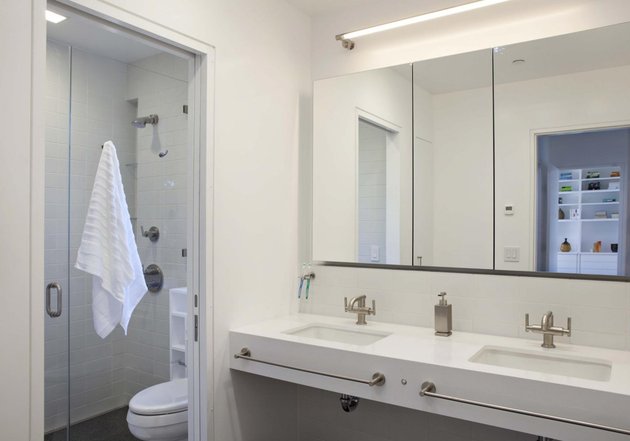 In similar vein to the kitchen, the master bathroom keeps the modern design on the elegant side of things, opting to go for an updated version of a traditional bathroom instead of trying to reinvent the wheel. Glass and white/grey shades are abound in here, making the environment more private than the living area while maintaining the light. 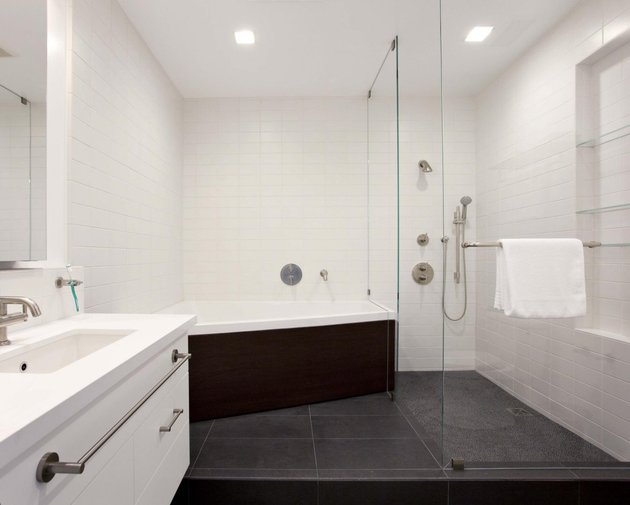 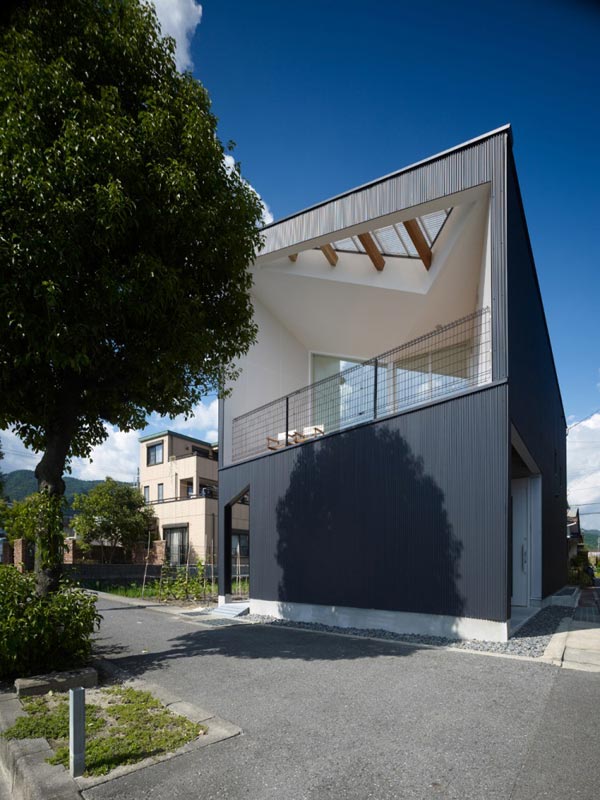 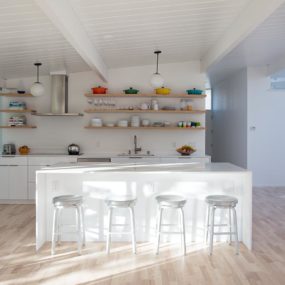 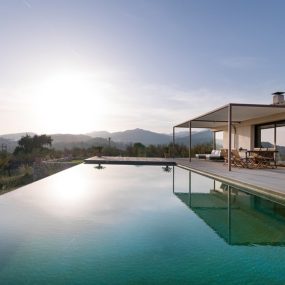 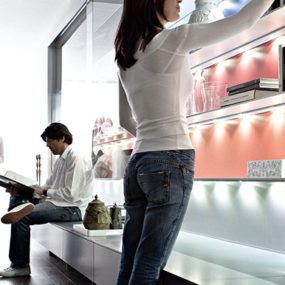 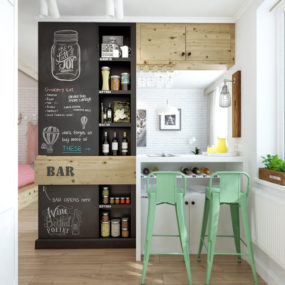