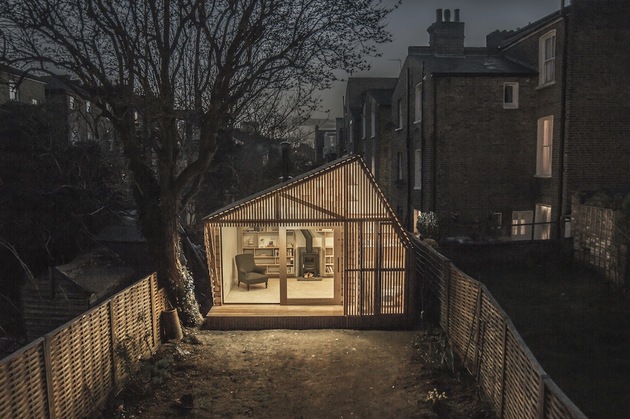 Built in the very unlikely location of London, this cabin is a project meant to provide a creative respite for its owner, a writer and artist. Designed by Weston Surman & Deane Architecture, the abode occupies a small plot of land between two blocks of England’s famous row houses, with a fenced-in area all to itself and a picturesque tree standing to one side. While the shape and structure of the building is contemporary and built to last, its construction is entirely from wood to preserve a sense of nature and warmth, hearkening back to traditional cabin design. While large windows bring in light by day, privacy is preserved by the projection of most openings out onto the lawn. A small porch sits in front of the entryway, with storage for logs and other items along one side. By night, the cabin lights up the yard in front of it with a warm, beckoning glow.
Inside, the theme of combining modern and traditional influences continues. As with the exterior, wood is the dominant material for the walls and decor of the cabin. However, despite is unassumingly minimal appearance, the building includes full utilities, with electric lighting, a working bathroom, and heat from a modern wood-burning stove. Along its longest wall, an expansive set of bookshelves is built into the edge of the room, leaving all of the remaining space open for the writer’s desk and keeping all stored items in one place. As a whole, the cabin is uncluttered and calm, a fitting creative escape from the city. 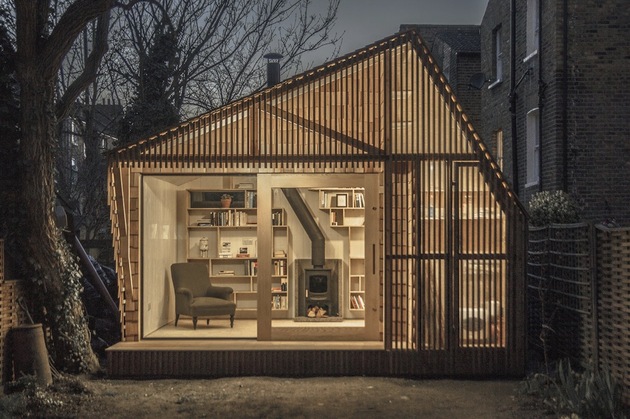 Though the angular profile of the cabin is doubtlessly modern, its general shape is reminiscent of arched-roof cabins that have been constructed around the world for centuries, and the architects chose to integrate many elements of tradition into their design as a reference to writers’ cabins throughout time. 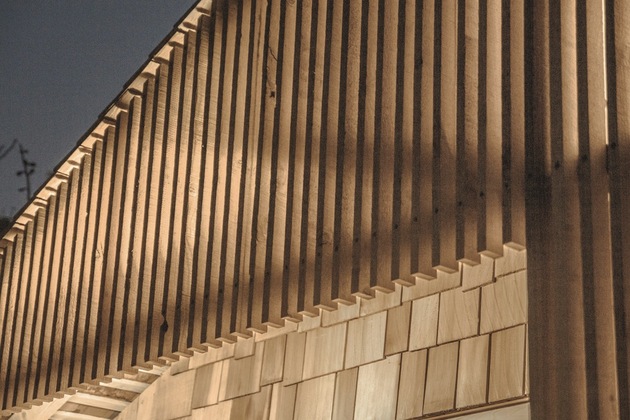 As light streams out from the dwelling at night, it creates a sense of warmth and nature around it. Without the large front glass on the building, it’s doubtful that such an effective projection of light would be possible. 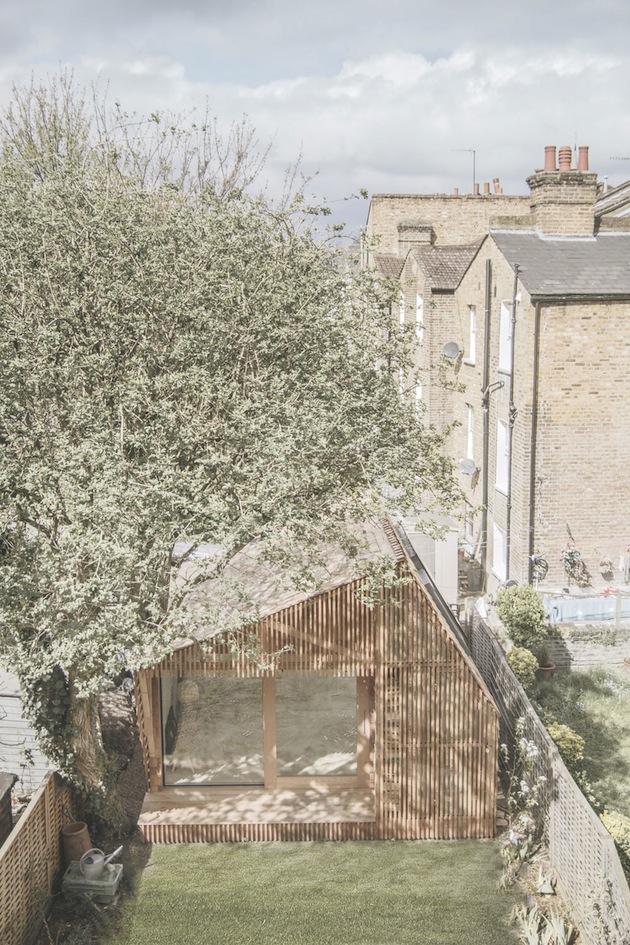 With its little fenced-in lawn and an impressive tree providing shade overhead, the property on which the writing cabin sits instills a sense of natural calm, providing a serene oasis from the bustle of the city. The placement of the building between two rows of typical British row houses is important as well, since it provides a buffer from the noise of the streets beyond. 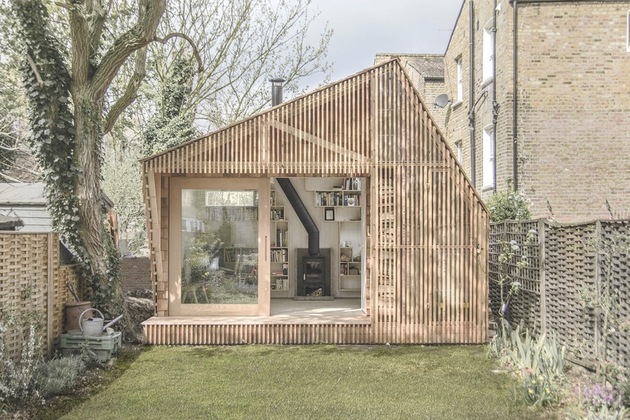 The slats on the front of the cabin aren’t structural; they’re simply decoration for a covered porch and a storage area which is only accessible through an exterior door hidden on the right side. A few feet beyond the boards, a solid wall keeps the elements out. 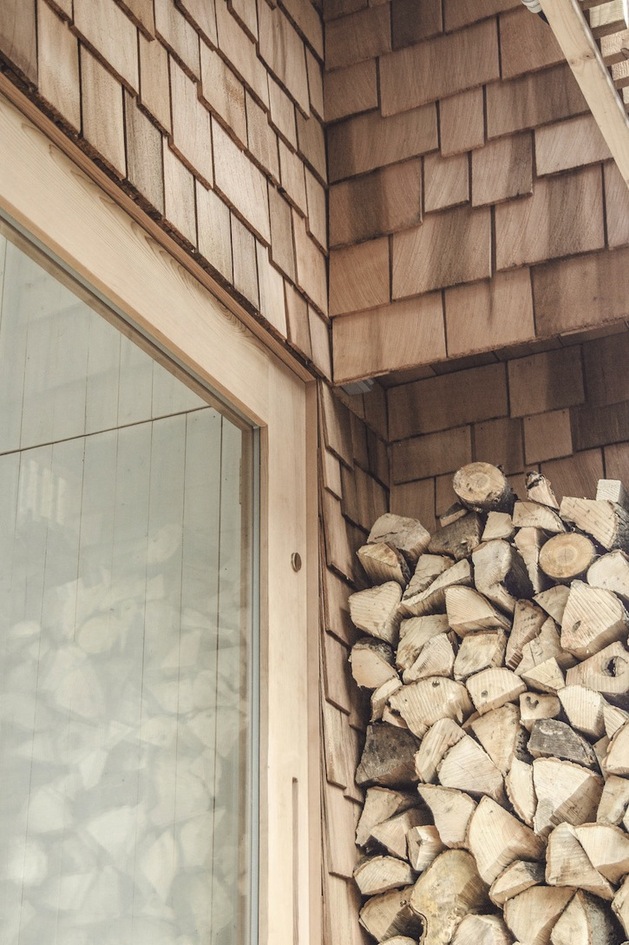 Between the slatted outer facade and the inside of the cabin, next to its porch, is a covered nook in which its owner can stack a firewood supply to draw from instead of cluttering up its compact floorspace or leaving the logs to rot in the rain on the lawn. 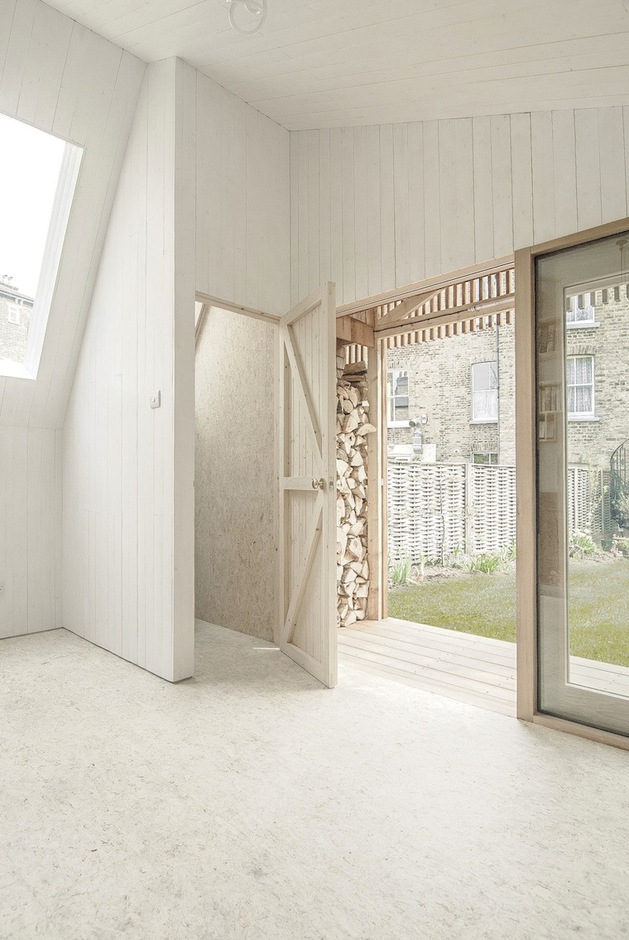 A step inside the urban escape reveals a handsomely appointed space inspired by woodland authors’ cabins throughout history and legend. Behind its wood board walls and sparse appearance, however, is a very modern building complete with a bathroom, electricity, and an inner structure meant to last. 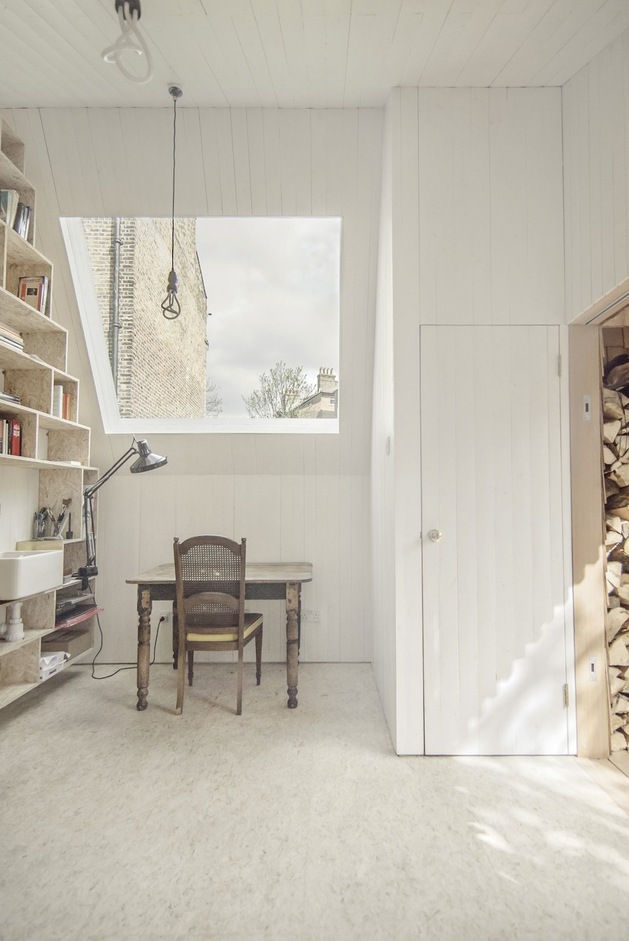 Directly underneath a wide angled window in the ceiling, the cabin’s writing desk gives an outward view of the sky overhead instead of the buildings beyond, connecting its occupant with nature even in this urban London landscape. Two bare vintage bulbs in the center of the room pair with the building’s furnace and a table lamp at the desk to provide warm-colored illumination at night. 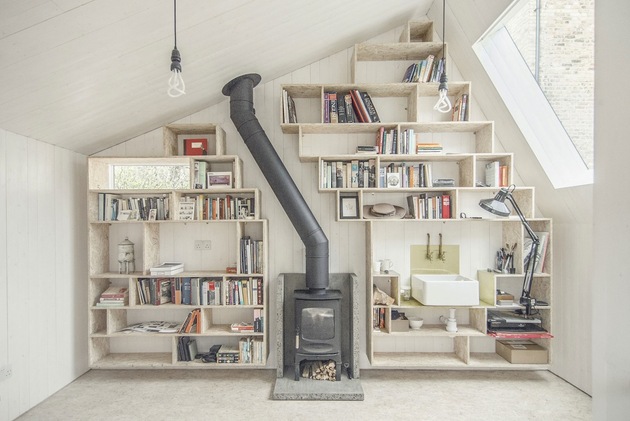 At the rear wall of the cabin, two sets of built-in shelves give storage for books and trinkets, with the chimney of the cabin’s freestanding metal furnace rising at an angle between them. The shelves help to define the edges of the wall, built rectangularly into each corner without touching adjacent walls. 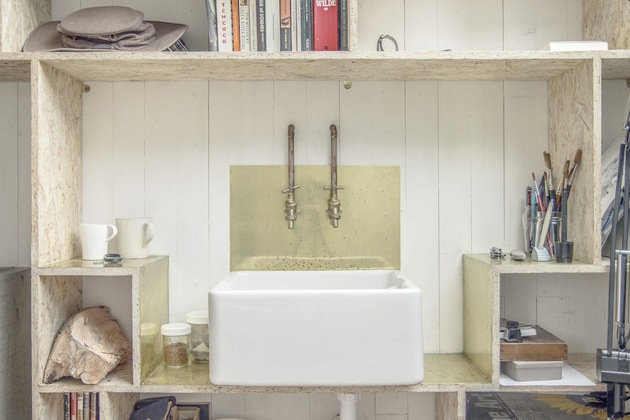 Another piece that suggests antiquity, this brass-backed sink is meant for washing the paintbrushes and coffee cups which populate the shelves on either side during creative sessions. The lamp which hunches over the desk to the right can be swiveled here to give a clear view of what you’re washing by night. 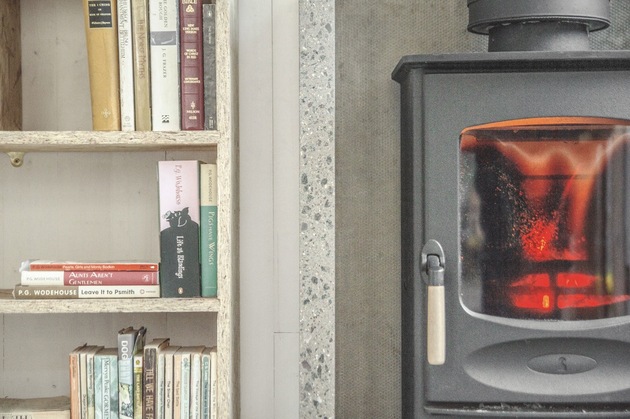 The furnace features a stone surround which keeps heat from affecting the shelves on either side by directing it outward toward the center of the room. In this fashion, a few simple pieces of granite passively ensure that the whole cabin receives warmth. 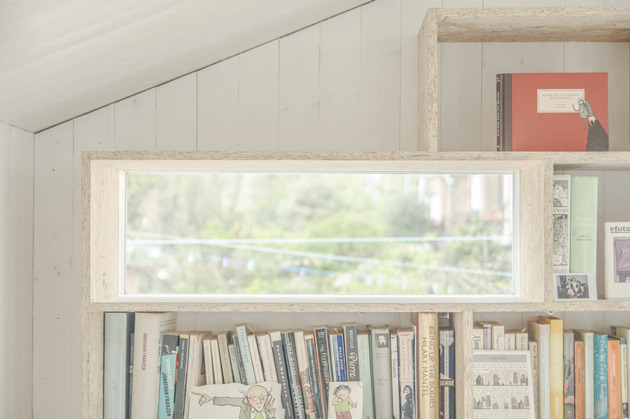 One last little window is hidden inside one corner of the bookcase, easy to miss when scanning your eyes over the shelves but vital to bringing that last bit of light inward.
Weston Surman & Deane Architecture 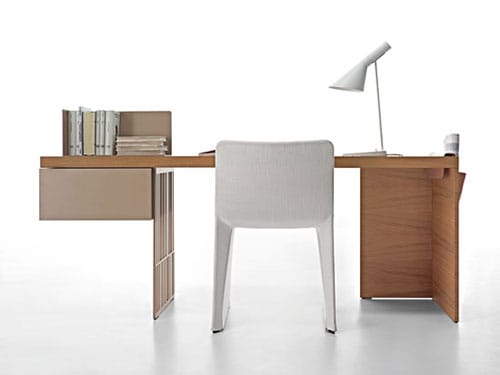 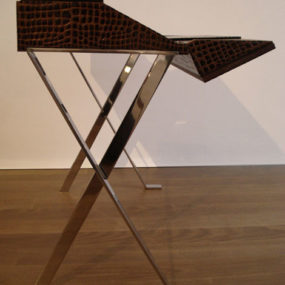 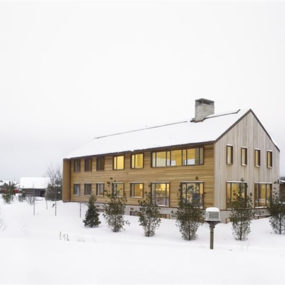 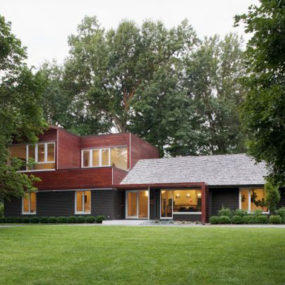 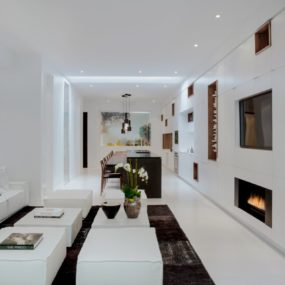 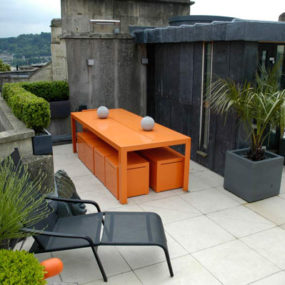