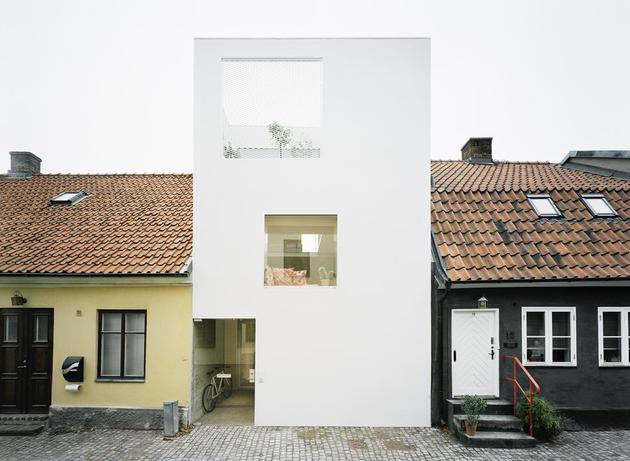 Standing out as one of the first new homes in the last three decades to be built in the once economically ailing Swedish town of Landskrona, this impressive townhouse stands out as a signal of the area’s revival. Built by a couple hoping to use it as a personal art gallery as well as their residence, the building’s walls and fixtures are all white both inside and out, with plenty of vertical space for hanging paintings. Despite its obviously modern form, efforts were made by the architect, Elding Oscarson, to unite the house and its more traditional neighbors, with wide windows and a layout that fits in with the height and breadth of houses nearby. Residing on a centuries-old street near the beach, the colors inside the dwelling are elegantly bright, creating an atmosphere of openness and comfort alike. Aside from the main house, at the rear there stands a small single-story structure in identical architectural style, housing an office space for the two homeowners. Between them, a square lawn contains an outdoor eating space and plant life to connect with nature. 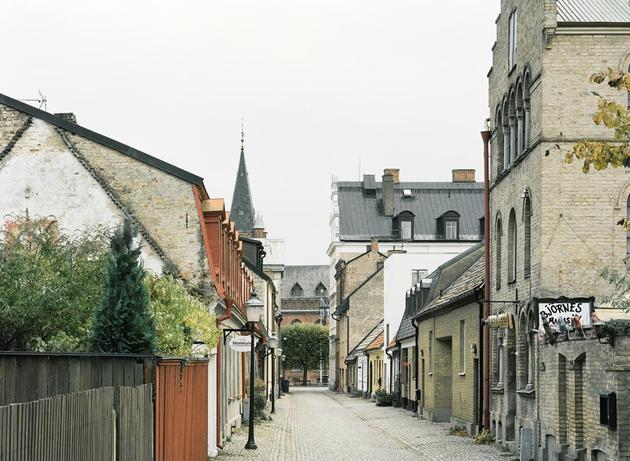 Set on a centuries-old cobblestone street, the townhouse is a contemporary outlier among much more traditional Swedish dwellings. Its placement on the street is immediately between two shorter building to help accent its rectangular profile, but is among taller buildings in the surrounding district to keep it from sticking out too severely. 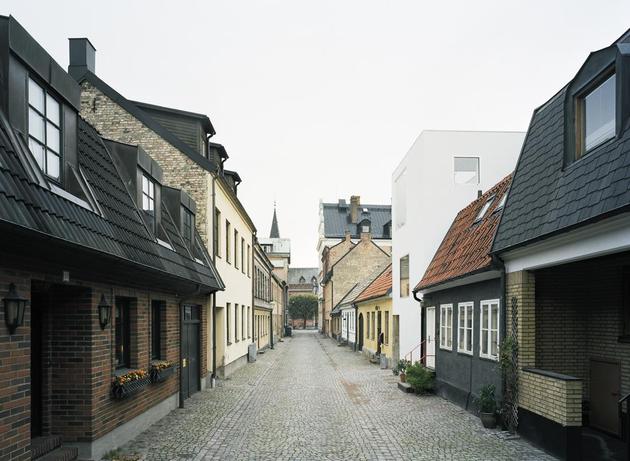 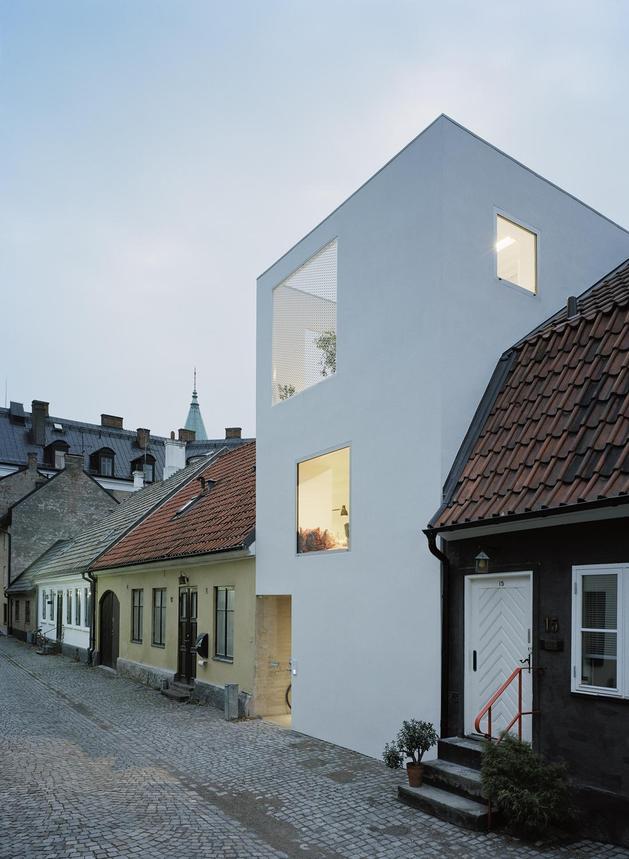 At its front edge, the house has two major apertures above a glass doorway on the ground floor. One central window gives view into the residence’s living area, while a wide offset opening on the top floor is actually a semi-outdoor deck. 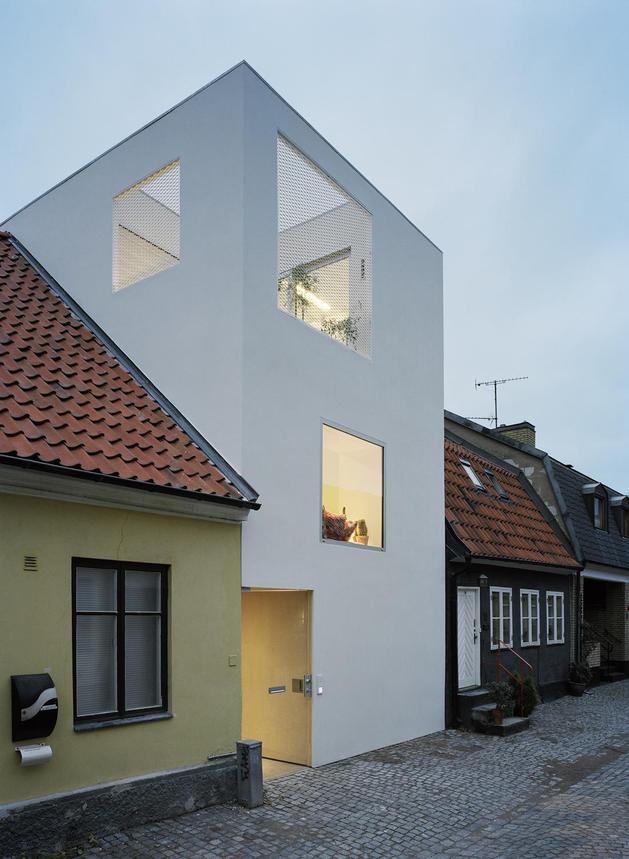 The home’s exterior design is kept light, open, and simple to give an impression of connection with its external environment, but is still designed intelligently to keep the view inward from being unhindered and possibly compromising privacy. 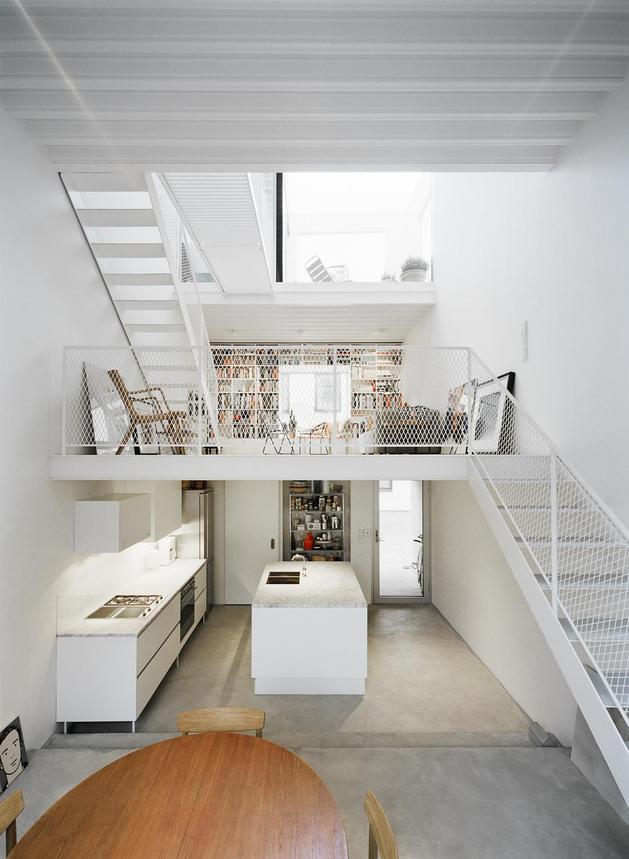 Inside, the house is arranged on three levels, with almost no formal doorways between rooms. The bottom floor contains a kitchen and dining area at slightly different elevations, the middle is made up of a living room landing, and the top level contains the townhouse’s sole bedroom and deck. 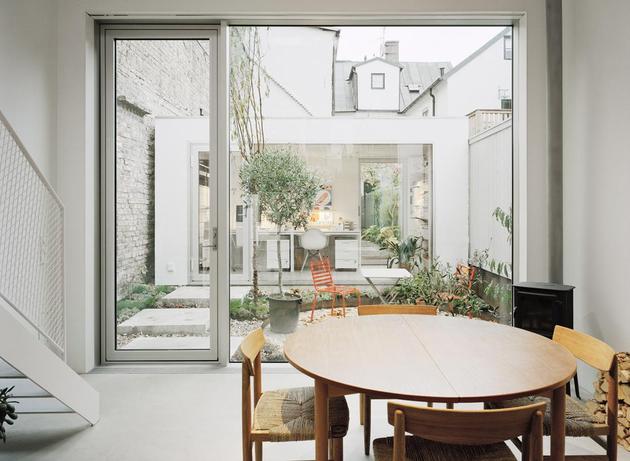 The townhouse is not just a single building, however, with a yard at the rear of the main home separating it from a compact, single-story office. Both of these structures have a large glass area facing the lawn, giving a bit of natural serenity to the urban European surroundings. 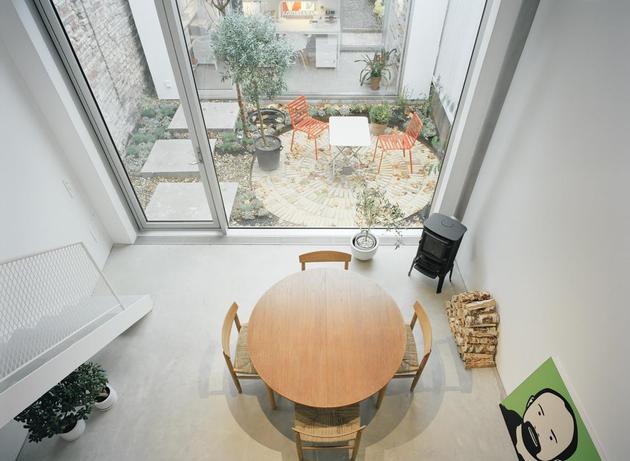 The arrangement of spaces inside the main building leads to high ceilings for the dining room and living area, both of which have unhindered two-story elevation. With stairways set on either edge of the house, no transition spaces get in the way. 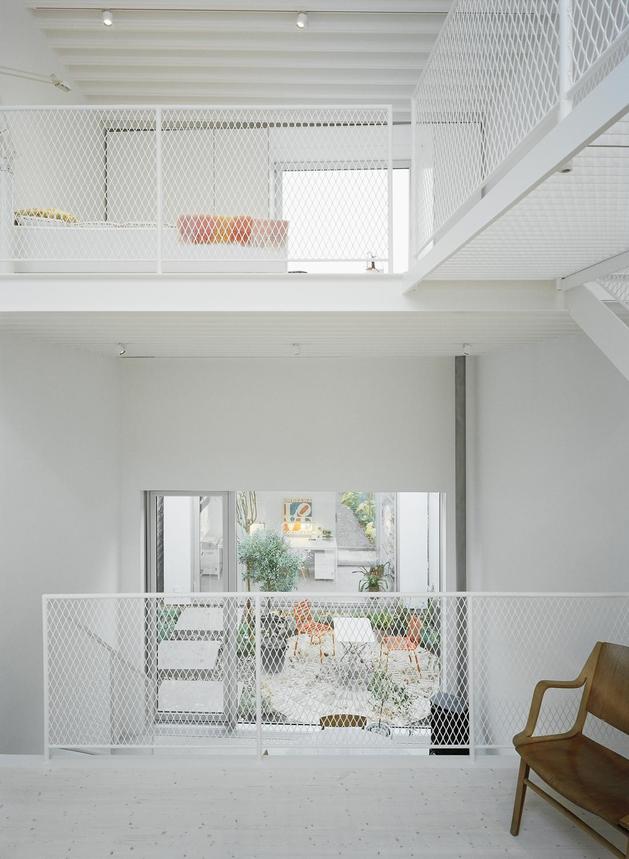 The railings for each elevated space are composed of wide metal mesh, combining the protection of a solid banister with clear views between levels and the lack of the maintenance need that plagues all-glass railings. 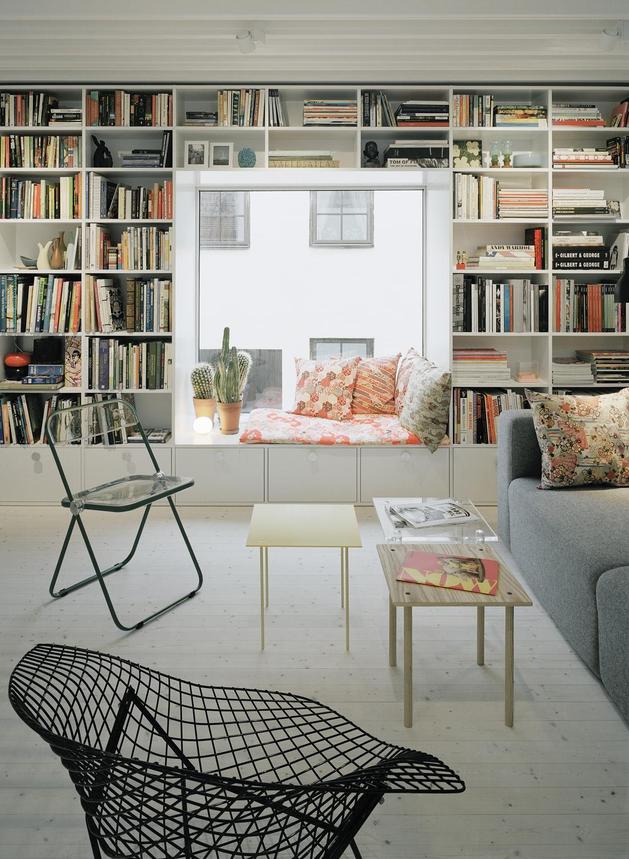 The central window on the front of the house forms a small ledge on the inner ledge, framed by a wall of bookshelves. This little nook sits at the edge of a living area characterized by a variety of cool colors and pleasing modern furnishings. 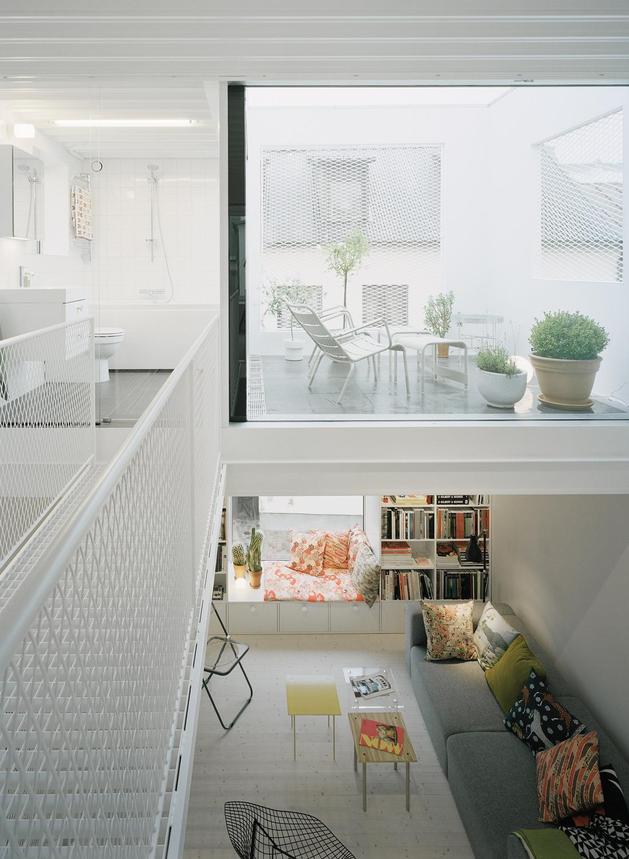 The top level of the house contains the largest number of disparate spaces, with its bedroom, bathroom, and deck. With so many rooms contained within an area that must stay essentially open, a bridge was built across the middle of the house instead of adding a section of traditional flooring which would close off the level to the lower floors. 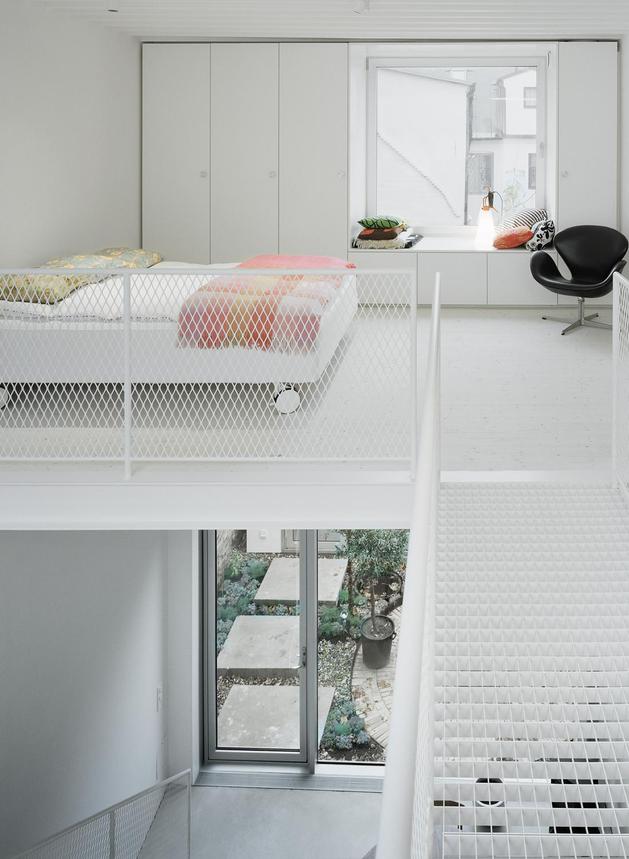 The bedroom itself is placed at the very rear of the home’s top level, with another nook window giving sight out over the lawn and office building. As with in the living room, decor elements help to give color to the white scheme of the house as a whole. 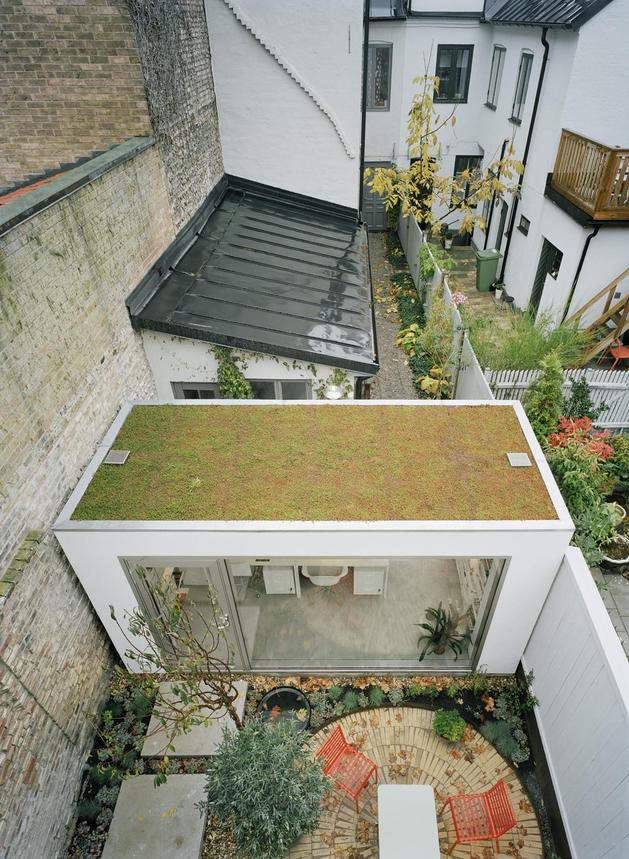 To enhance the natural influences of the lawn when viewed from above, the roof of the office is planted with a plot of grass. A path made from square stone slabs leads from the dining room doorway to that of the office, which shares its concrete flooring. 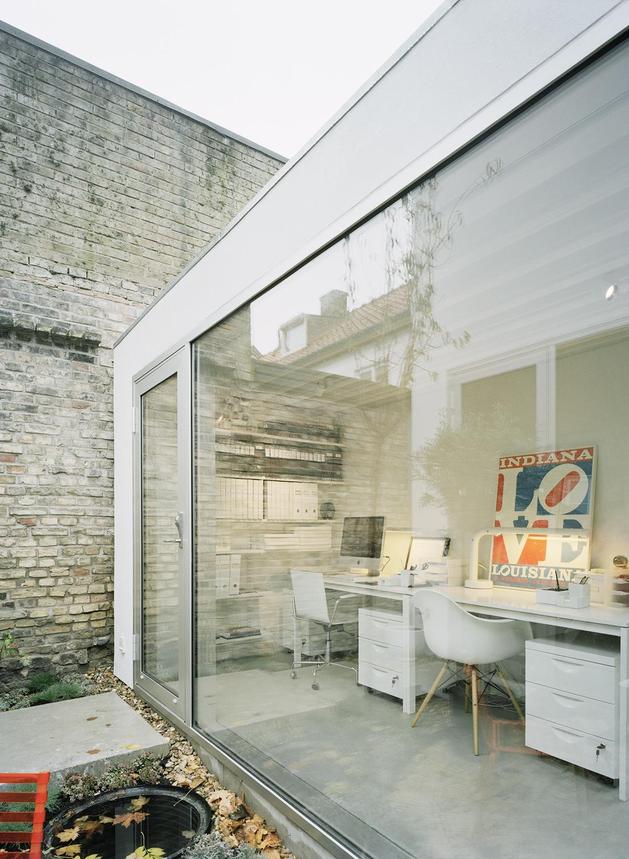 The office is fairly thin, composed of just two desk areas, a shelving section, and two doors, one at the front and one at the rear. Each window and door frame is lined in silver metal, giving definition to its limits. 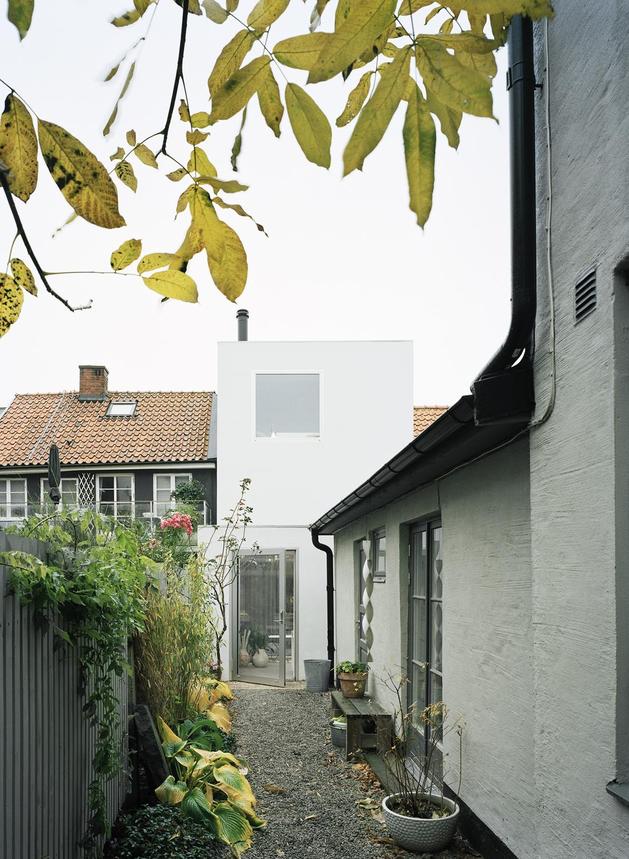 Behind the office, and additional passageway leads past another home and to the next street over, allowing residents to go directly there instead of passing around the corners of their own street.
Elding Oscarson 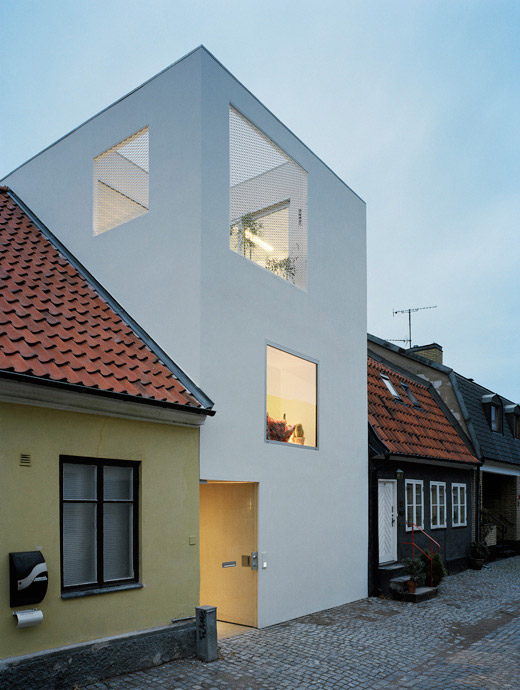 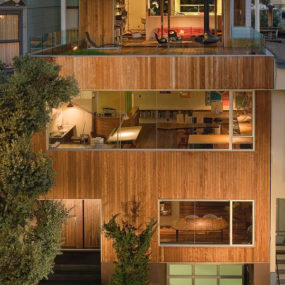 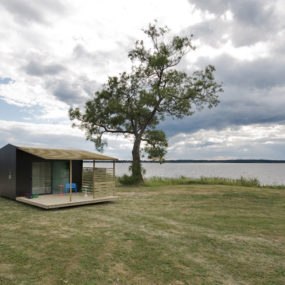 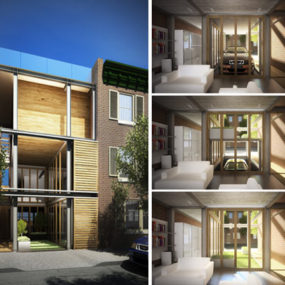 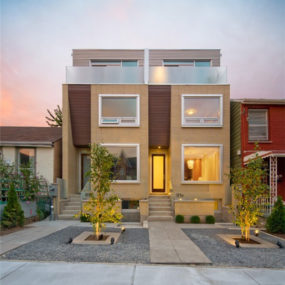 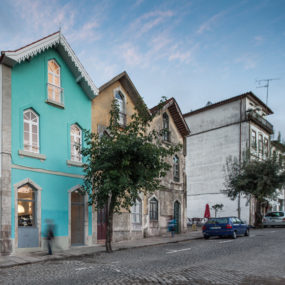