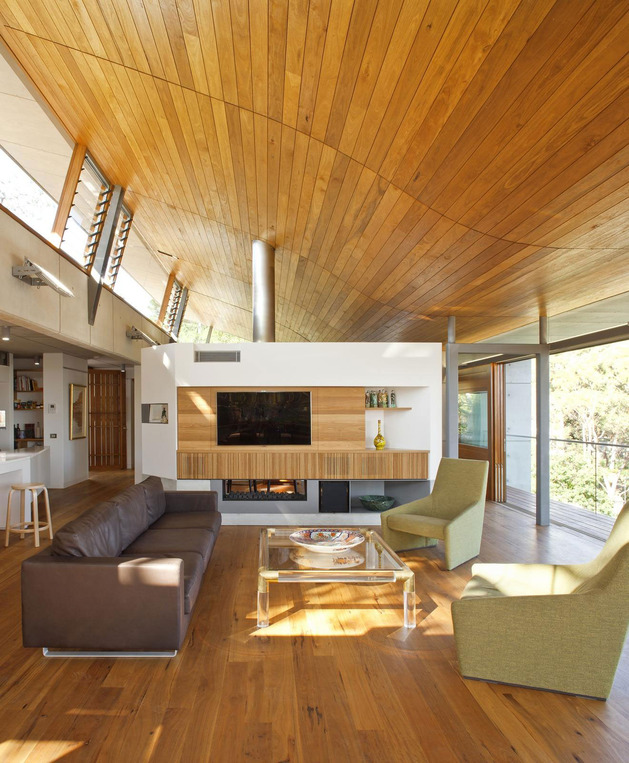 The Angophora House near Sydney, Australia combines unique interior details with the natural landscape. Richard Cole Architecture has combined terraces and clerestory windows to connect the indoors to the outside while at the same time using the large cliff boulders to penetrate the interior walls within the more private zones. Glass, steel support structures, wood finishing and natural stone are all combined to create a home that is both exposed and contained. Flooded with light yet softly shaded, hard-edged but also curvaceous, man made as well as natural. The contrasting elements are a story repeated throughout this residence from this stunning social space right down to the most private of rooms. 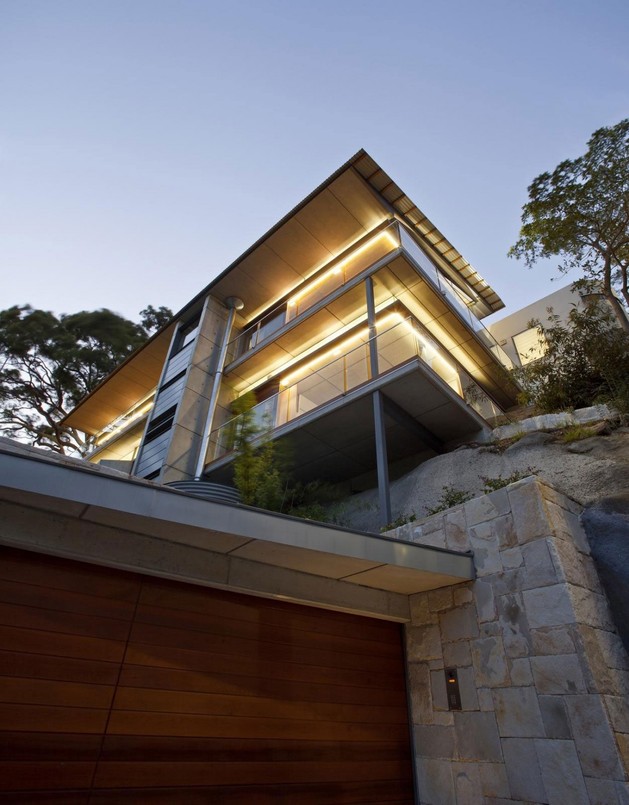 Looking at the exterior of the Angophora House it is easy to see how the architect was able to penetrate some of the interior walls with natural boulders. Perched both on and in the site boulders, the home begins its story of contrasts from the moment of approach. 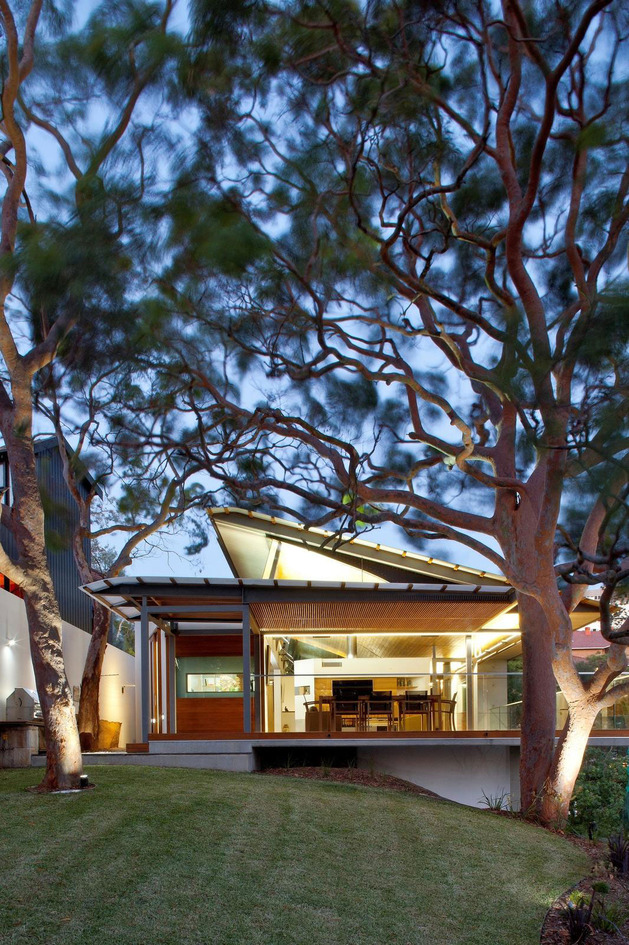 Unlike the front of the residence, the side yard is fairly level and easily accessible from the wrap around terrace. When the walls of glass that separate the interior zone from the terrace are open, only a couple of stairs separates the social zone from the grassy slope.

While the side yard is just a few steps away from the eating area, the living zone next to it has a Cliff-side view of the surrounding landscape due to the sudden level change of the site. The eating area is located just outside the wall of glass and another dining space on the other of the fireplace / TV wall creates the perfect eating zone when the weather is less then perfect.

The interior dining area has a view of the living room fire via the double sided fireplace, and while the living area has a TV above the fire, the dining room opts to feature a large paining. The sides of the fireplace wall are slanted and give the appearance of being paper thin from this angle, when they are actually wide enough to support both the fireplace and shelving. Hints at the depth are achieved with the two small voids cut into the wall’s framework.

The fireplace itself is not given a position of importance, and all but disappears beneath the deep wood mantle. The floating wall is a study of angles and materials and as a complete unit is a stunning sculptural form that appears tied to the curvaceous ceiling lines above by the simple column created by the chimney stack. 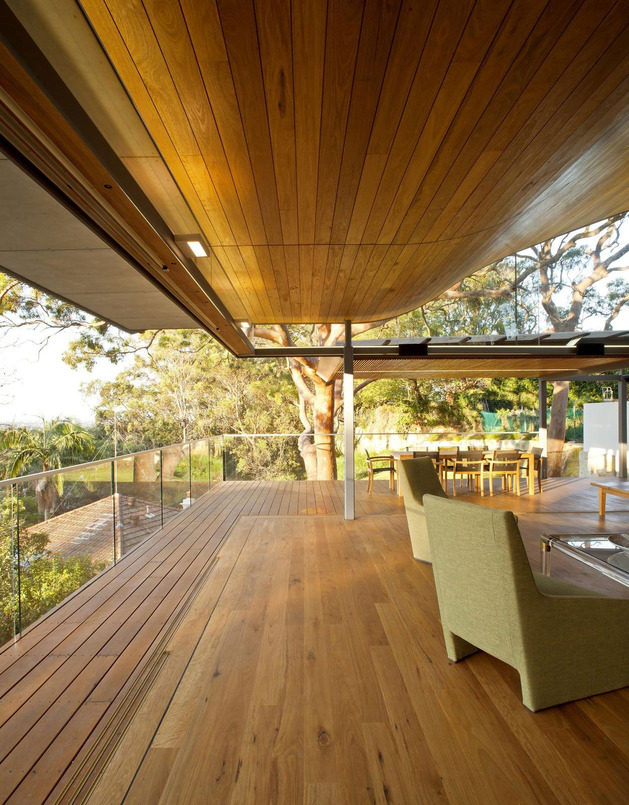 The wood clad ceiling wave is a tribute to the curvy lines of the tree trunks just beyond the terrace. 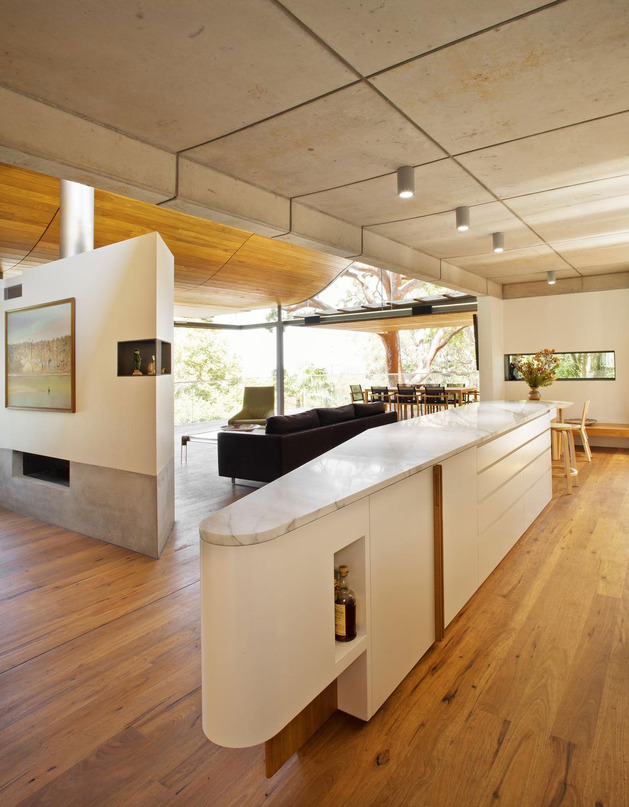 Further into the home, the wavy ceiling is replaced by concrete. Beneath the concrete ceiling is a small eating area and the kitchen. A row of concrete lights flood light down to the kitchen island which is as nonconforming in shape as the fireplace wall – and just as interesting.

Behind the indoor dining area, tucked behind a wall is the master bedroom. The wavy ceiling continues into this space and is finished off with a custom cut piece of wall glazing that enhances the curvy shape to the ceiling.

The ensuite to the master bedroom may not have the wavy ceiling feature, but it makes up for it by having a curved wall that leads into the shower area. While the theme of wood is continued within the cabinetry of the vanity, the room itself is completely clad in mosaic tiles for a spa like atmosphere. Located behind the master bedroom, the ensuite extends past the bedroom wall and has a small window that overlooks the backyard as well as clerestory windows within the shower to let as much natural light in as possible. 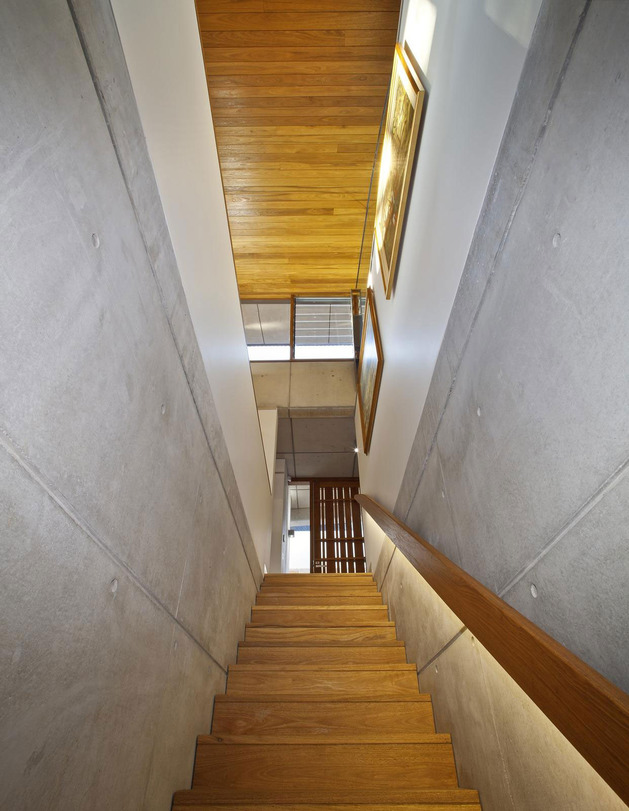 A flight of stairs leads to the lower volume and the front entrance area. With concrete walls and wood treads, the stairwell is a contrast of warm and cold materials. The handrail has LED lighting hidden behind it for a soft downward glow to help lead the way either up or down.

Downstairs an office features a large boulder penetrating the exterior wall. Lit from below the boulder creates an organic relief sculpture of organic shape next to the linear wall of books. Behind the books is what appears to be a solid wall with two paintings featured. 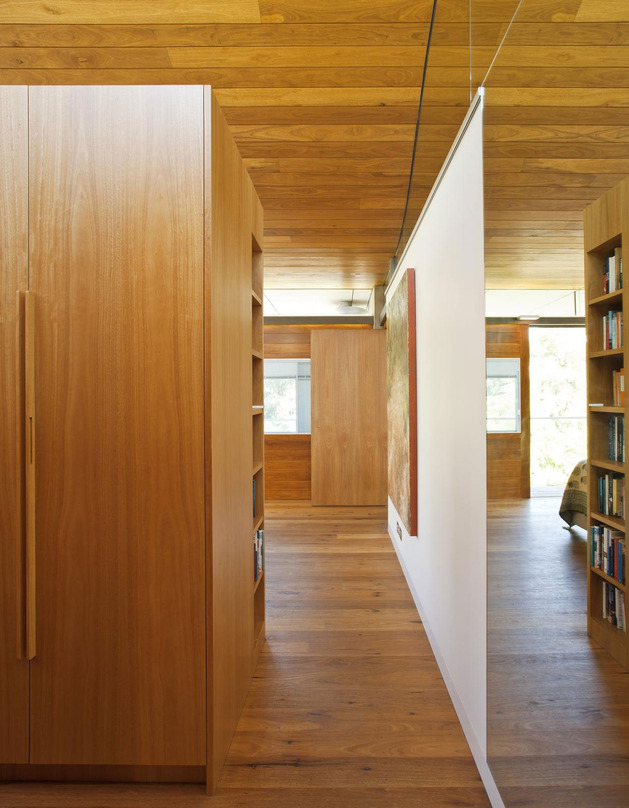 The solid wall is actually a screen that divides the office in two. The weight of the two paintings is balanced by the art hanging on the reverse side. 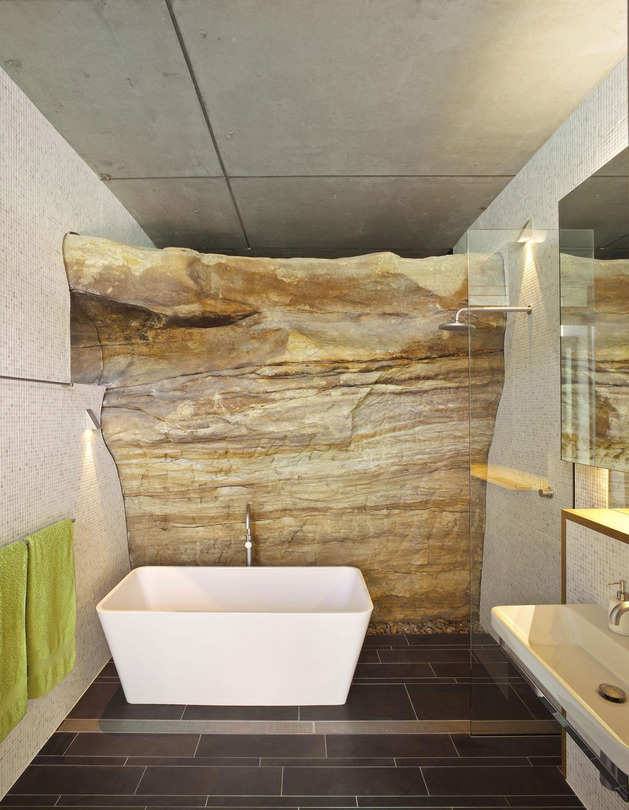 This lower volume has its own washroom and here too, the cliff face breaks through the exterior wall to create a backdrop for the bath and shower areas. The walls leading up to the boulder are carefully scribed to fit the rock face and feature the same mosaics as in the ensuite upstairs. A Frameless glass panel separates the shower area from the vanity so as to keep the view of the boulder intact.
Richard Cole Architecture 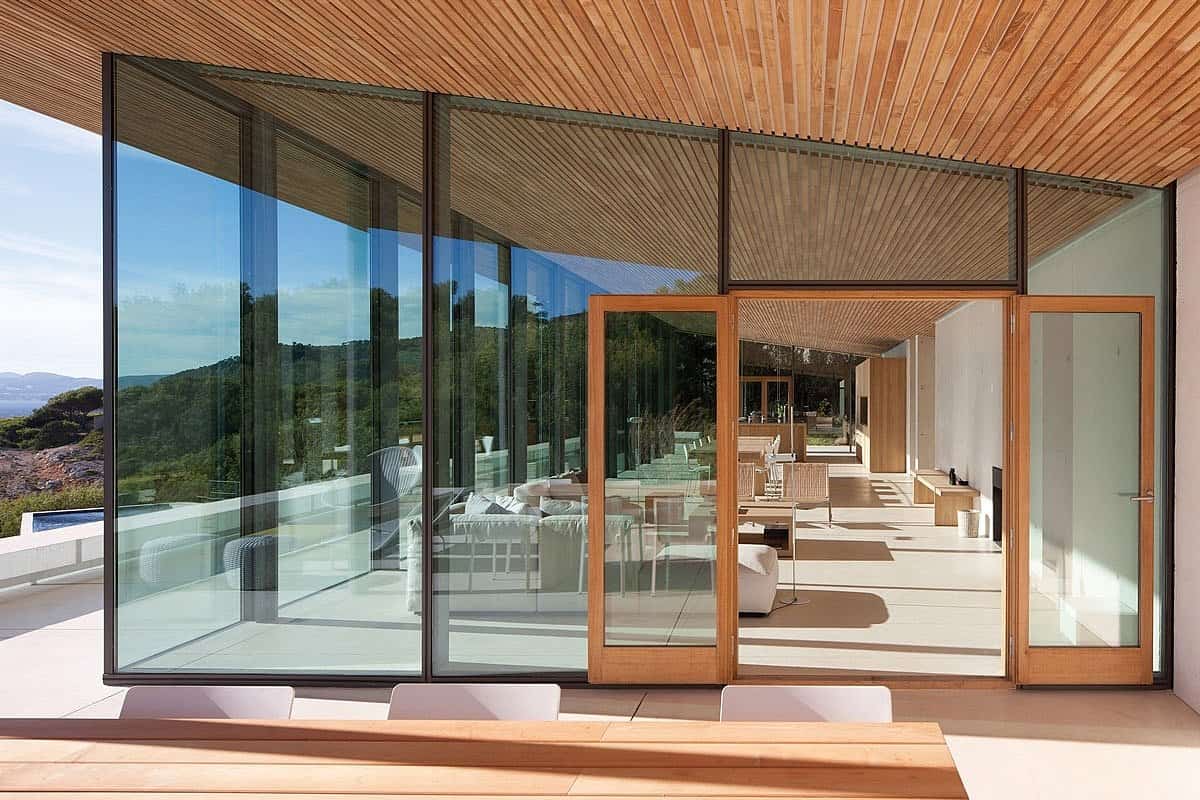 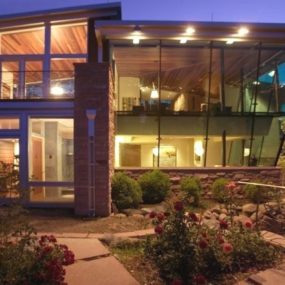 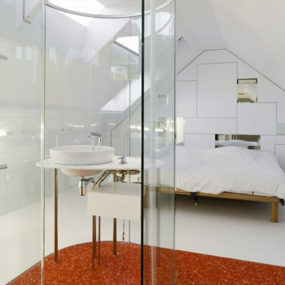 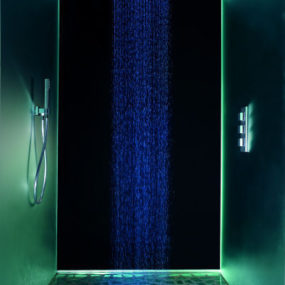 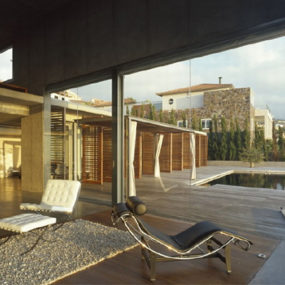 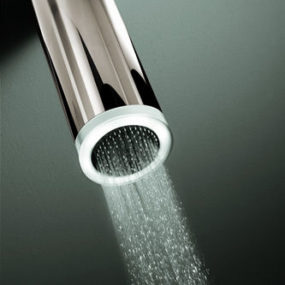