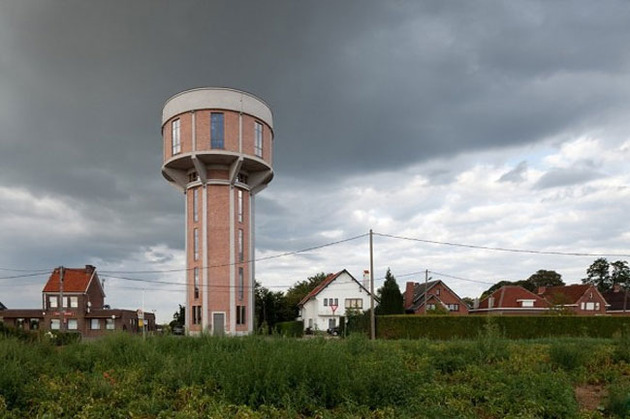 Bham Design Studio received a brief from their client’s to convert an old, abandoned Water Tower (built between 1938 and 1941) located in Steenokkerzeel, Belgian into their own private residence. The volumes that would become the living quarters for the clients where 30 meters above ground, and offered spectacular views of the surrounding village within a large, circular floor plan. 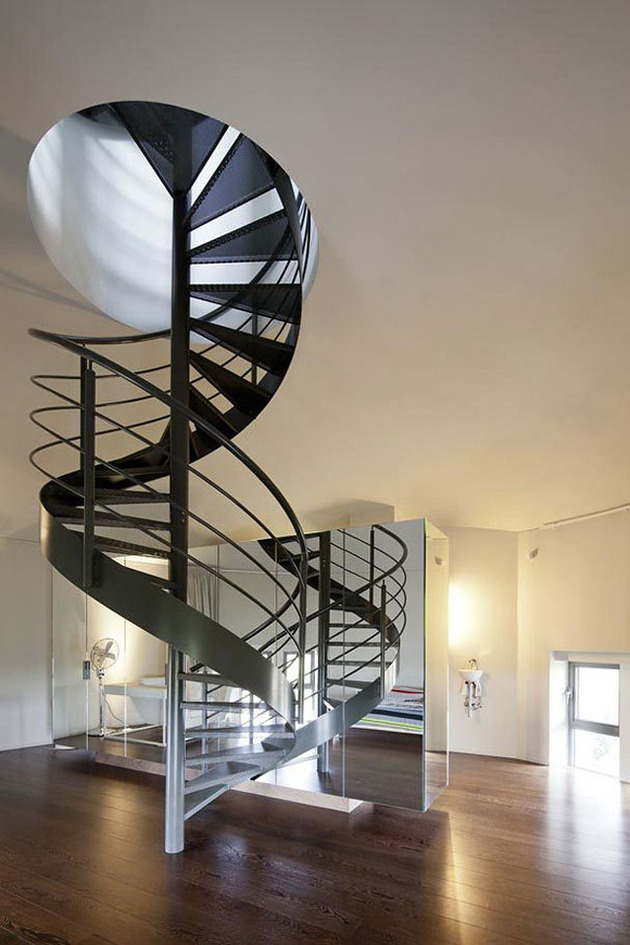 While the exterior presents itself as a unique and interesting place to call home, it isn’t until you enter the tower that the full drama takes effect. A huge central staircase curves it’s way up and through the first floor ceiling disappearing through the void as it makes its way to the living zone of the tower. Just in case you enter the tower in need of a bathroom, a powder room is discretely tucked out of site – but completely open – to the right of the entry way. 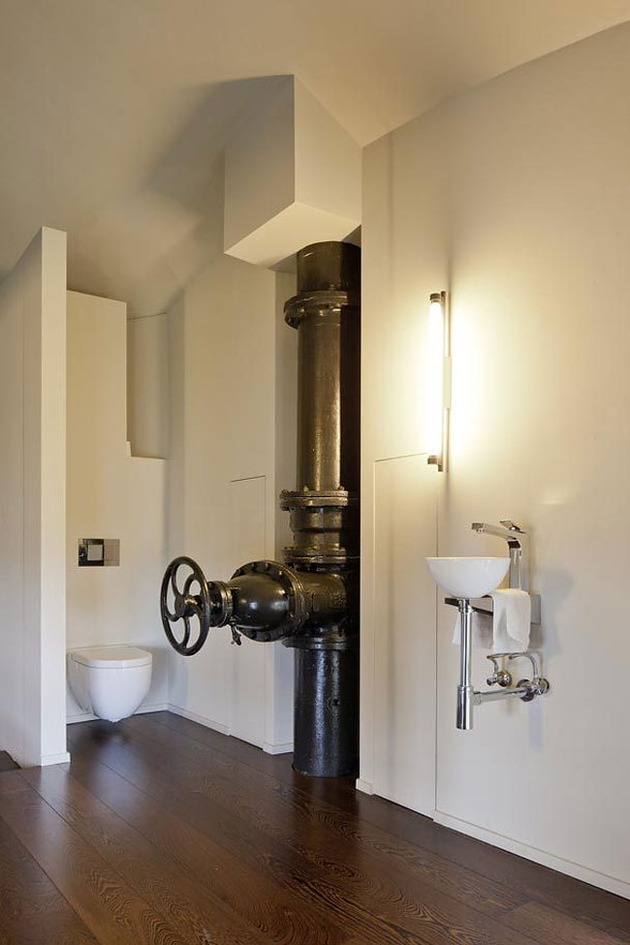 While the powder room is strictly a utilitarian space, the visual power of the original steam pipe and pressure valve creates an industrial sculpture of historical interest. 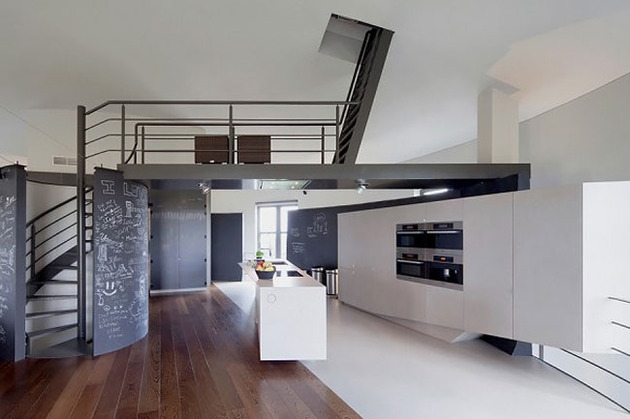 The large circular statement of a staircase eventually finds its way to the main living area of the water tower before continuing up a short ways more to a landing that doubles as a dropped ceiling over the kitchen. 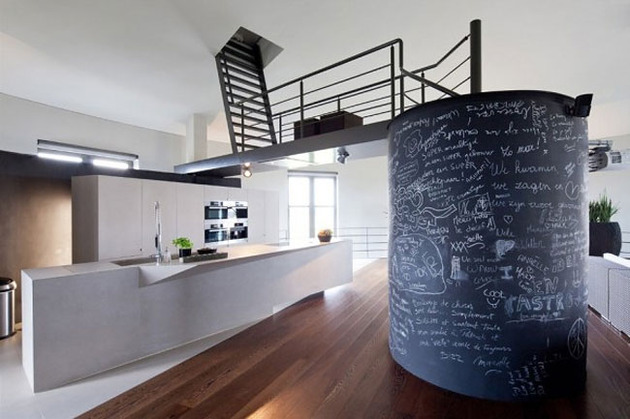 While the homeowners respect the historical value of the home, they still like to have fun and so walls have been wrapped around the stairwell and covered in chalkboard paint. The chalkboard paint is a recurring feature within the kitchen zone but is most “decorated” with words and drawings on the stairwell surround. 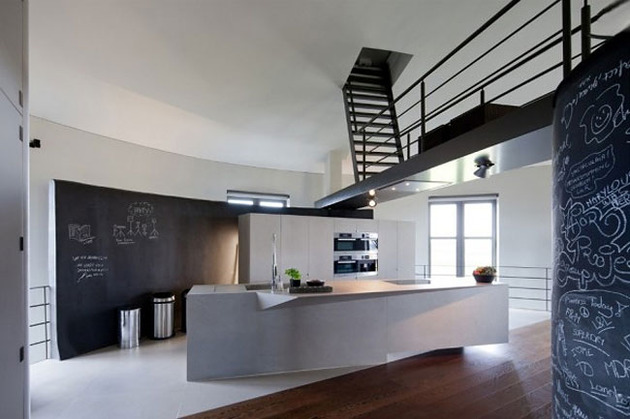 The kitchen itself has its own fun with architecture elements starting with the cat walk landing above that just happens to be fitted with task lighting for the island. Then there is the fact that the island is angled to cross over the division of the flooring materials and where it does it daintily lifts its skirt to hover over and keep exposed the wood flooring. Repeating this adjustment in vertical plane is the triangular void within the counter itself. 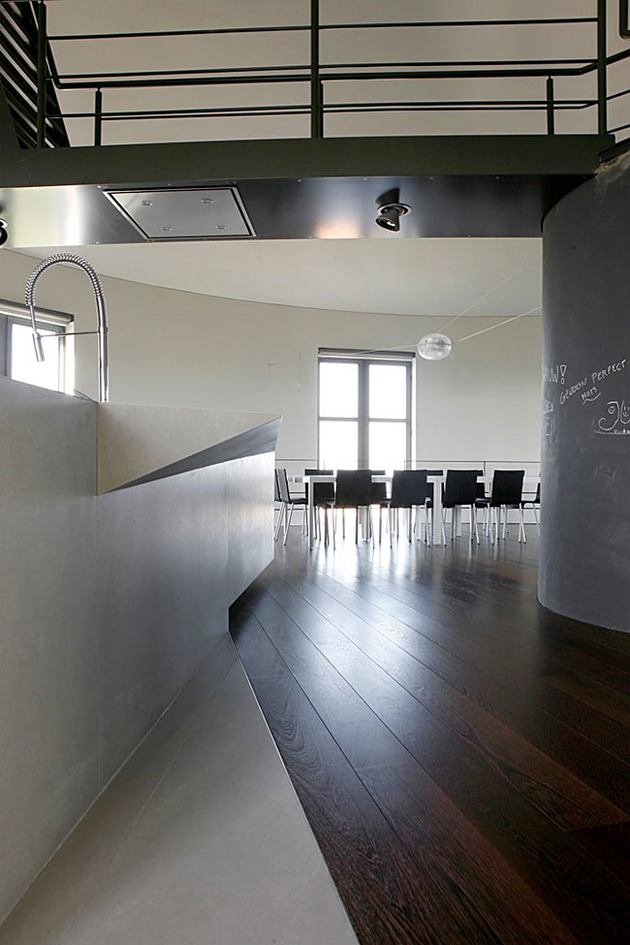 Just past the kitchen zone is a large dining area boasting a table for 12. While large, the table could easily be expanded to seat even greater numbers. 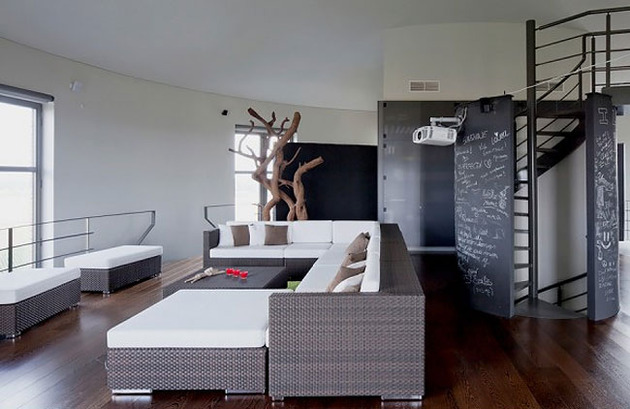 Continuing around the circular floor plan and ending up on the other side of the round chalk wall is the living section of the residence. As large as the dining area, the living room features a section big enough to seat 7 with additional double ottomans and a chaise section. This comes in handy on movie nights when the projector mounted on the chalkboard wall displays a feature film onto the roll down screen located above the windows. 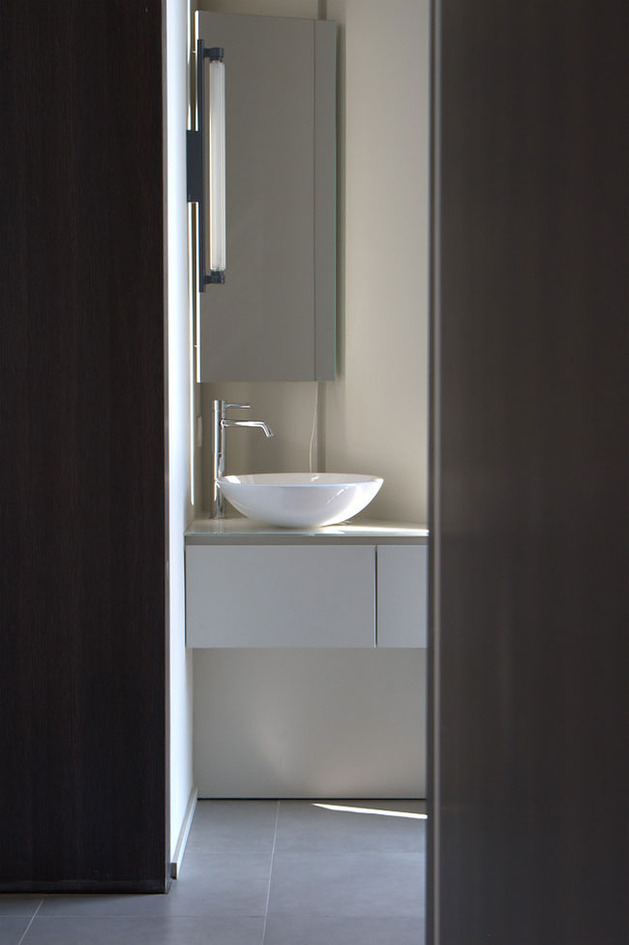 A bathroom on the main level guarantees no one has to travel back down or up another flight of stairs before or after dinner. 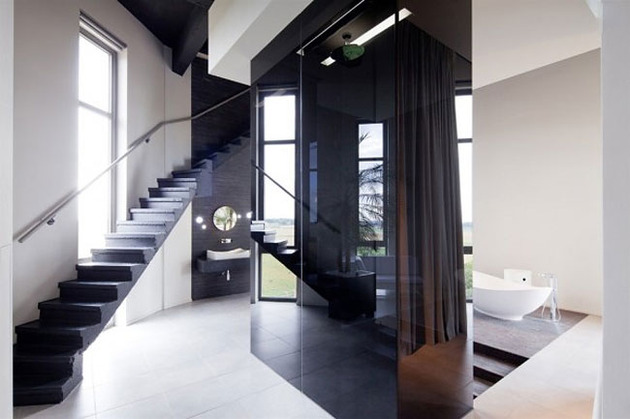 On the next level there is a guest bathroom that leads up to the guest bedroom. The bathroom is a luxuriously outfitted with an open shower stall behind smoked glass, a free standing soaker tub and spectacular views. 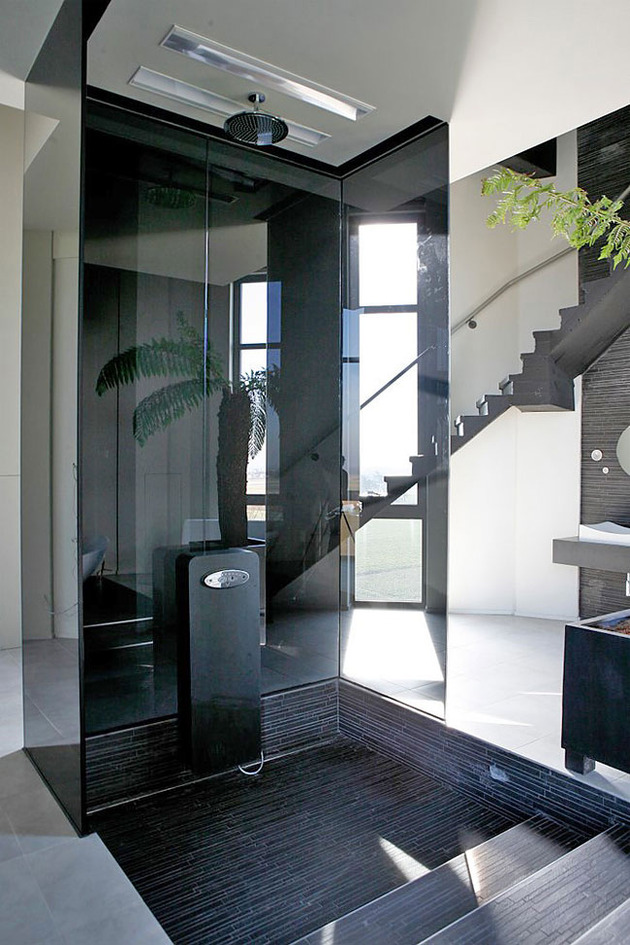 The sunken shower is designed to be exposed but at the same time contained via the smoked glass surround. This slows the dispersal of steam, keeping the space directly around the rain head warm while being used. 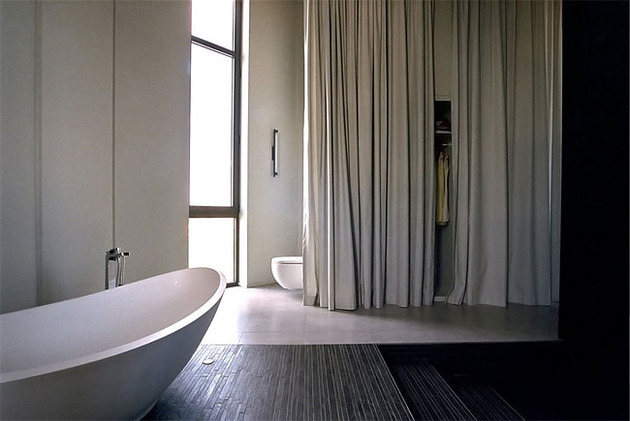 The toilet is located behind a floor to ceiling section of curtain for privacy. This same curtain hides the owners wall of clothes. 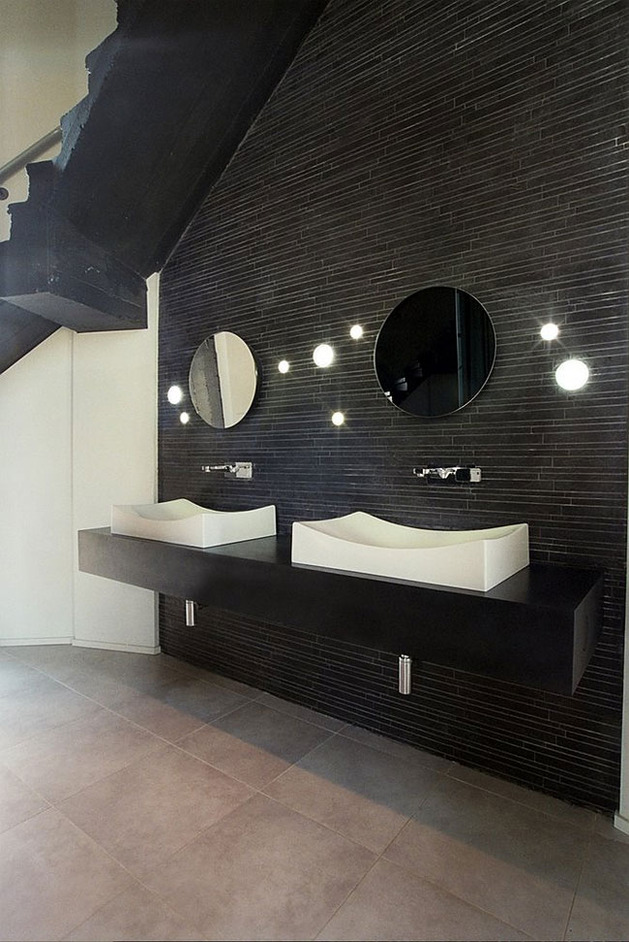 The double vanity is located just below the stairwell that leads to the bedroom. Here a simple vignette of floating counter, two vessel sinks and two round mirrors are actually the backdrop to the artistically installed lighscape and wall of tiles. The lights glow against the tiles as though stars with the mirrors possibly representing planets or moons. As moons they would reflect the image of the man (or woman) on the moon when looked into. 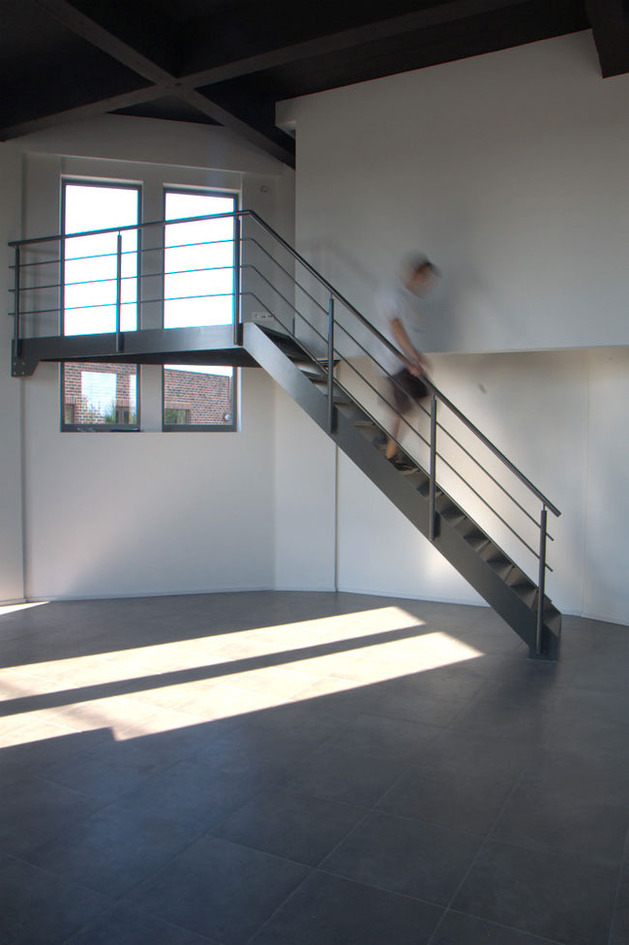 The bedroom also has a flight of stairs and this one leads up to a rooftop deck. 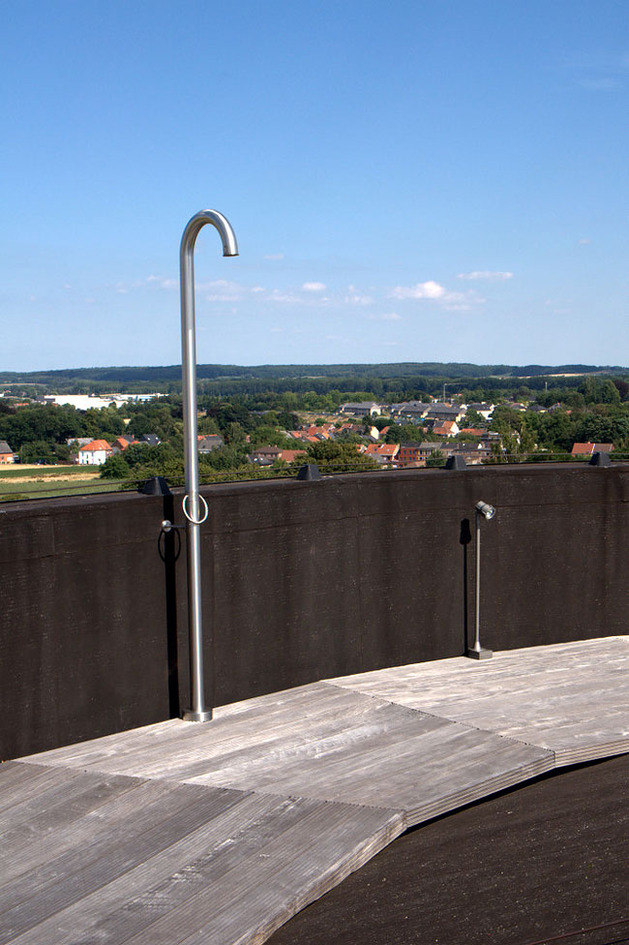 The rooftop deck offers a view that an ordinary residence simply couldn’t. 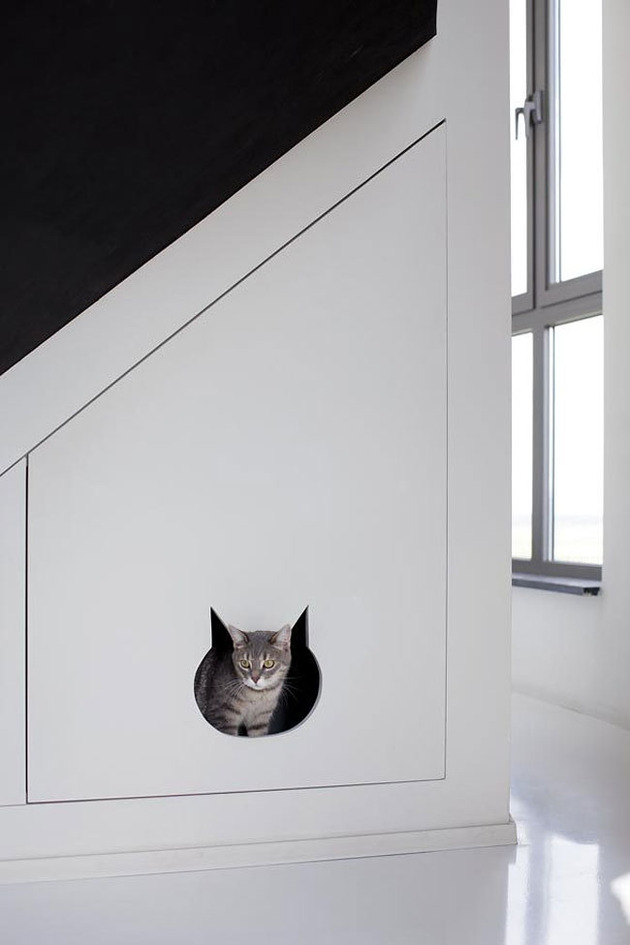 While renovating the water tower, Bham Design Studio took into account all the family members. How cute is this cat bathroom? No kitty litter in plain site here. 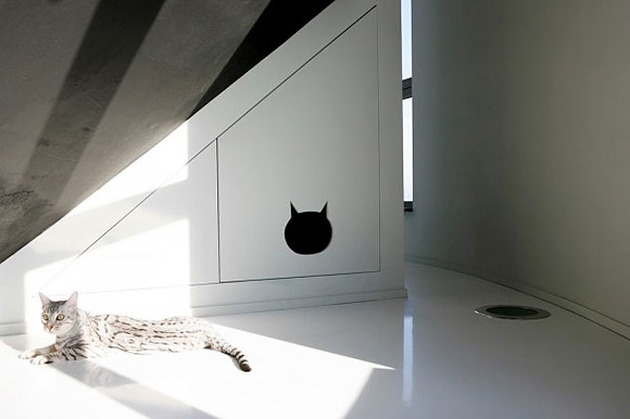 With its own private bathroom and lots of sunshine to bask in, that is one happy cat! 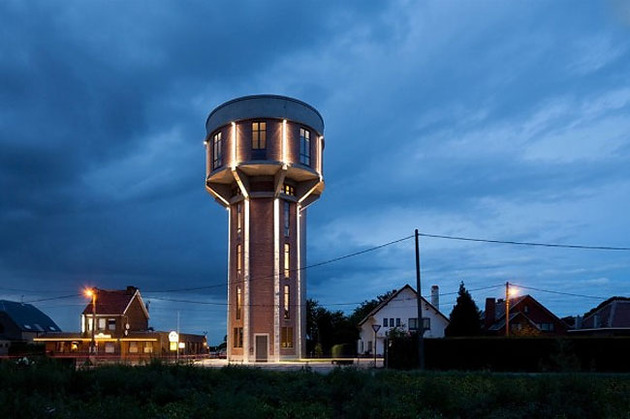 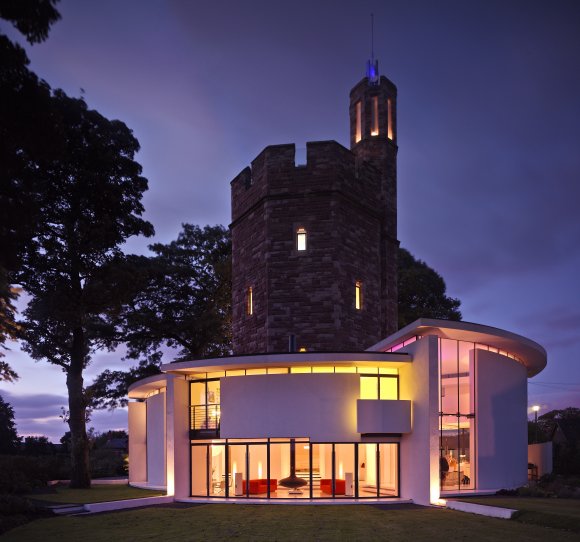 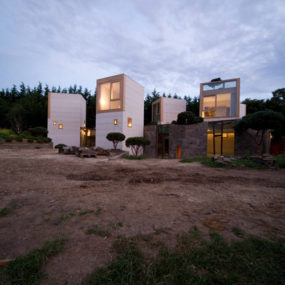 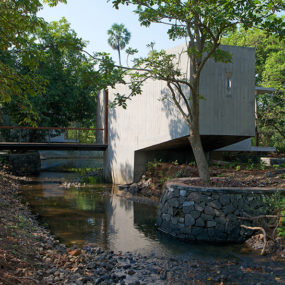 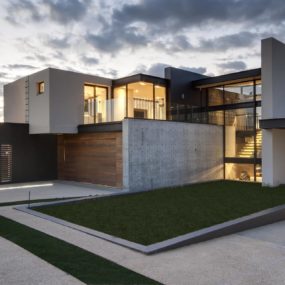 Geometric Concrete and Steel Home with Stone and Water Elements

Geometric Concrete and Steel Home with Stone and Water Elements