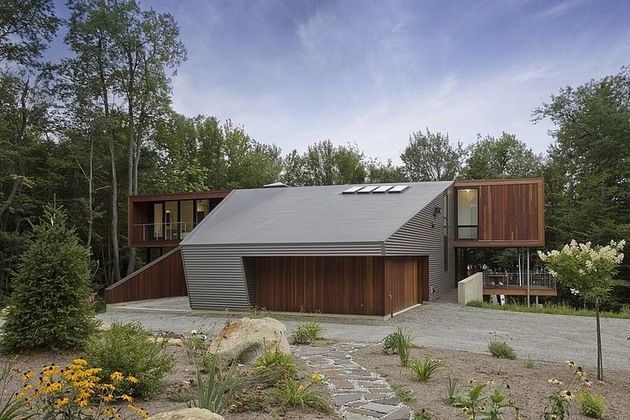 This family home, set in the woodlands of the northeast United States, caters to owners who enjoy outdoor living and the amenities of the modern home, but also have concerns about preserving the condition of their abode for a long time. Instead of choosing a hard-to-maintain glass-walled design, the residents had Jay Weiner Architects draw up a three-story dwelling with exterior finishes of concrete, wood, and metal, with all but the last of those elements carrying into the interior in some important capacity. The house appears to be two levels from the front, but as its property rolls down a hillside a lower level is revealed, a basement which contains a combination of storage and luxury spaces. The middle floor contains the principal living areas of the house, including an impressive kitchen with two full floors of ceiling height, and the top floor is reserved for bedrooms and bathrooms.
As opposed to many designs in which furniture colors are the principal determinants of mood in a room, this house has its vision of each area built into the very structure of the building. The personality of each living room and eating space (there are more than three of both) is due mostly to a combination of ceiling height, window area, and wall materials. The largest living room retains its sense of intimacy with low ceilings and a warm-colored fireplace installation, while another smaller one is bordered on all sides by wood to invoke a connection with nature. The formal dining room is small and dedicated to a single purpose, a stark contrast to the eating counter in the tall kitchen. Private rooms adhere to these principles as well; each and every part of the house has some structural variation (instead of simple decor) to set it apart. 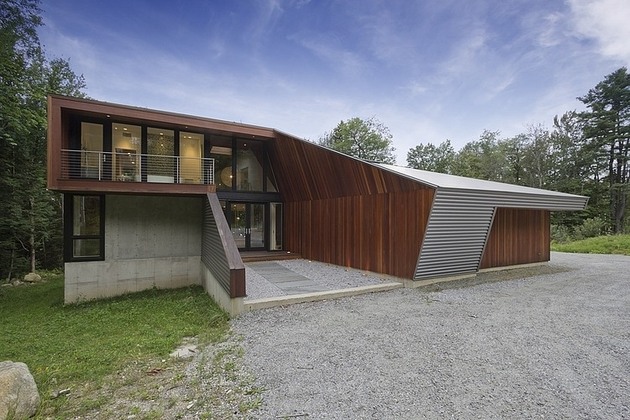 The home’s entry path is one of its most uniquely dramatic features, consisting of more than just simple landscaping. The entire forward structure of the house is geometrically wrapped around its pebbled walkway on the left and right, with ever-heightening smooth wood finishes integrating the outside and inside of the building. 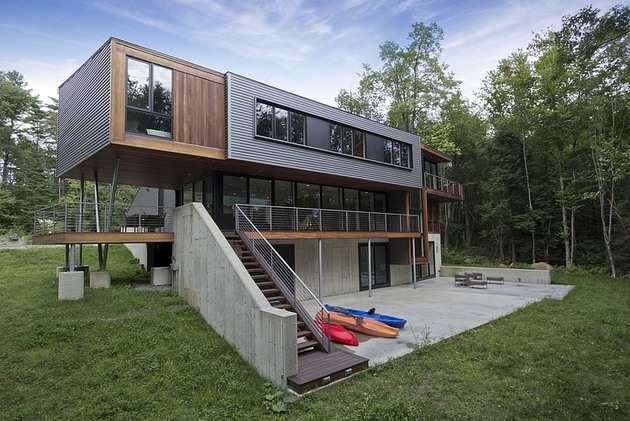 As the lot slopes downward toward the rear, more and more of the dwelling’s architecture is revealed. At the lowest point of property bordering on its walls, the house reaches three stories into the air. Numerous decks and cutouts provide outdoor access to each and every floor, and the concrete lowest level has a dedicated patio for entertaining. 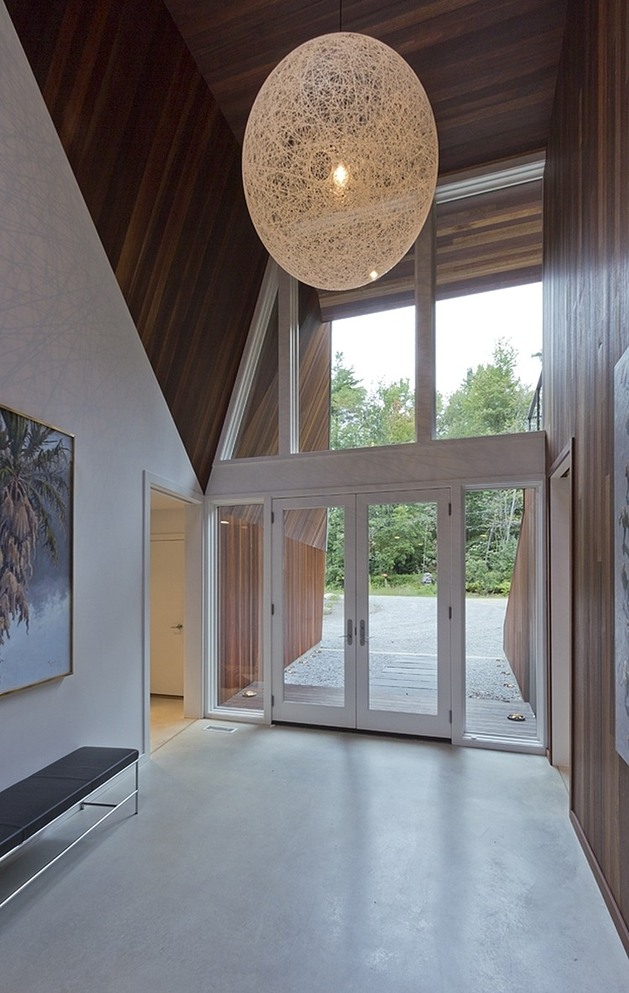 As you enter the house, one wall continues with the wood finish seen outdoors while the opposite edge fades away to white in sleek, angular fashion stemming from the doorway’s corner. An orb chandelier fixture casts creative shadows on this new wall covering. 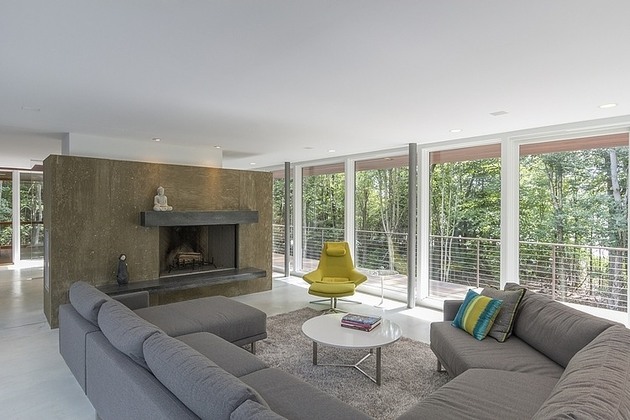 Throughout each interior level of the house, two important factors give distinct moods to each room. The first, as witnessed already, is wall finish: wooden finishes give a warmer atmosphere, while white keeps it modern. The second, equally important, is ceiling height: more intimate rooms have traditional low ceilings, while certain public areas like the grand entrance have much taller borders. 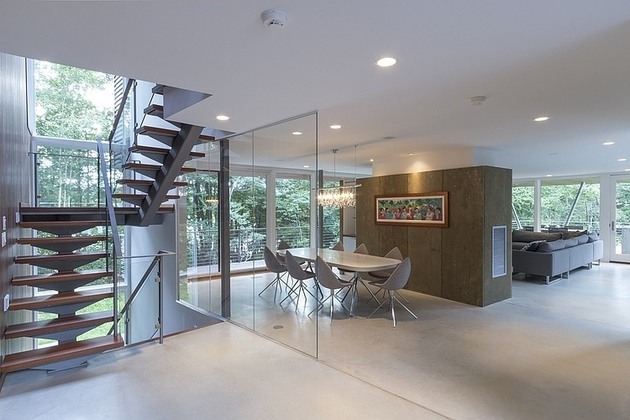 The main floor, which is the ground floor on the front side and the second floor at the rear, contains the main living room, an adjoining dining room, and a true dream kitchen. A dark stone fireplace provides separation between the former two spaces, while the kitchen is defined by a dramatic shift in ceiling height and colder colors on its fixtures. 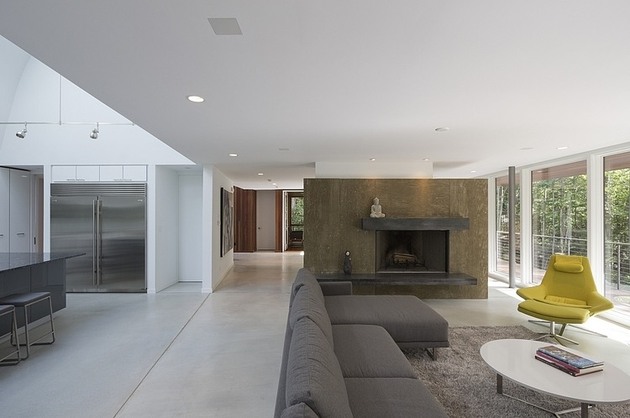 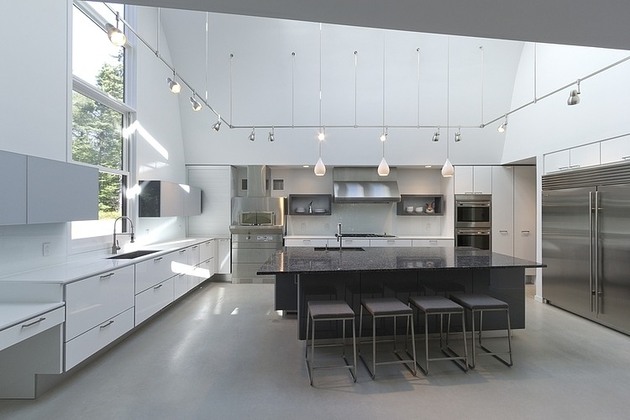 The kitchen has two conventional ovens, a wide stovetop, and a professional bread oven – and that’s only along a single wall. A true chef’s kitchen, it’s serviced by two sinks, a professional fridge/freezer, and dozens of cabinets and drawers. 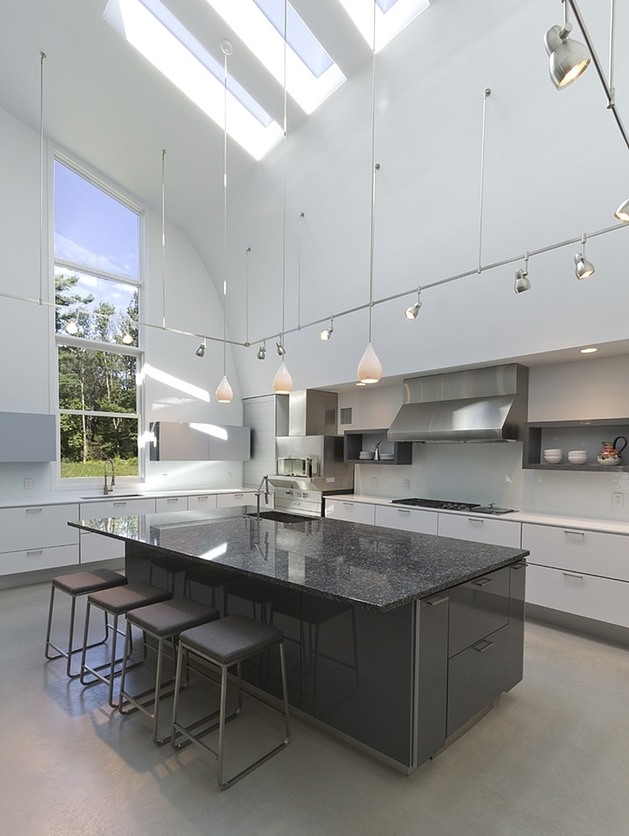 Though the principally white color palette of the room helps to instill airiness to begin with, the kitchen is really opened up by its sheer height and the amount of glass area contained in its walls and ceiling. The room extends all the way up to rooftop skylights, and a sink-wide window more than a story tall lets in even more natural light. 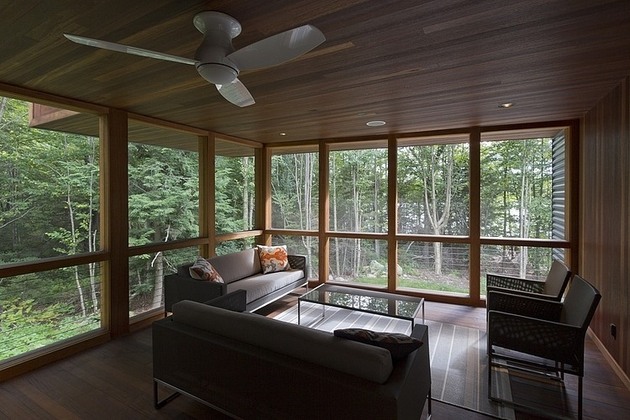 On the complete opposite end of the spectrum from the tall, white kitchen is this intimate living room, set on one side of the main floor. This wood-paneled space and the similar kitchen space behind it have window panes than can be removed to transform it into a contained porch for relaxing and socializing. In fact, the home’s floorplan designates this area as an outdoor room. 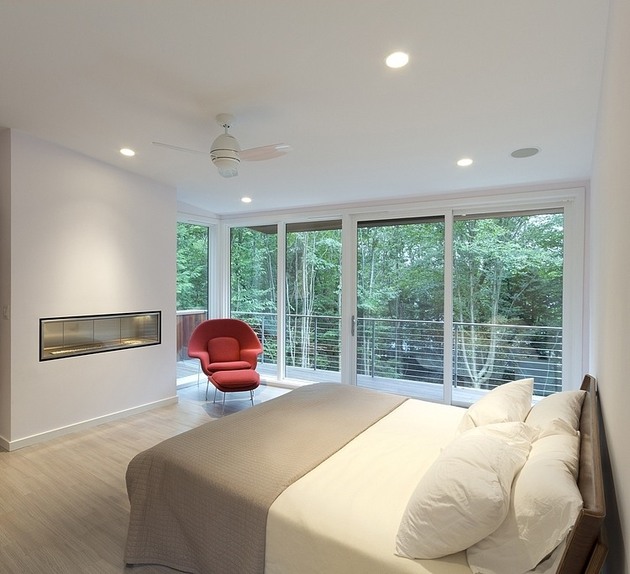 Similar in design to the main living room on the floor below, the master bedroom has just a touch more intimacy with the addition of a new wood flooring finish. This small change signals the private nature of the room in a way that the concrete floors of the living room could not have done. On this floor, only the master bedroom and bathroom have access to outdoor decks.

The lowest floor of the house, mostly covered by hillside, contains even more amenities. They include additional dining and living areas, a wine cellar, and a dedicated sauna. In addition, a large portion of the level is reserved for a large storage space for kayaks and other outdoor gear.
David Weiner Architects 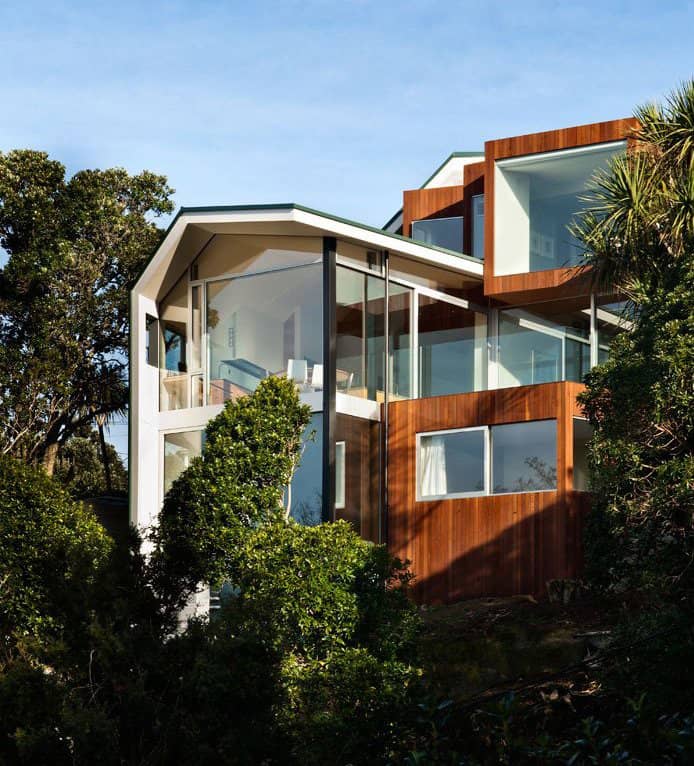