The Zilvar house by ASGK Design is located in a small village in Eastern Bohemia in the Czech Republic.
It looks very unusual with its ‘caved in’ roof but what’s really striking about this small wooden home is its wooden sliding shutters – there are so many of them and in all different sizes. A metal Z-frame is prominently embedded in each shutter making them look cute. They give the house a very farmhouse like character. This seems to be the latest trend, to use rolling shutters, as we see a lot of homes featuring them lately. 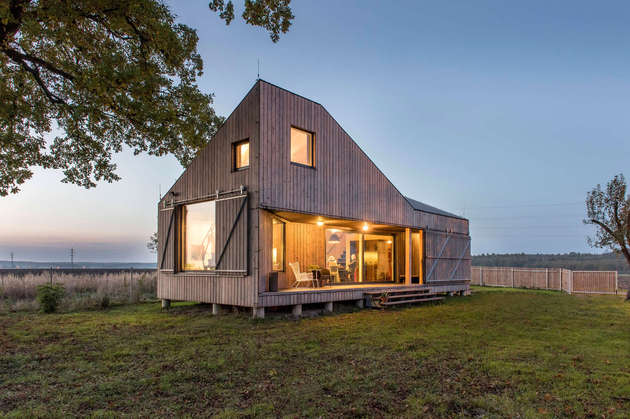 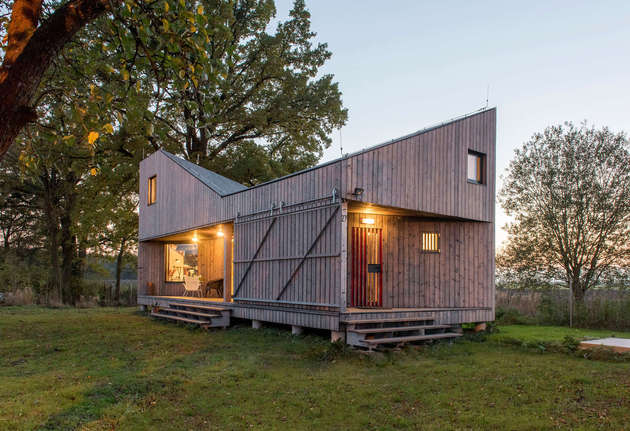 The house is raised above the ground on round monolithic concrete pillars. 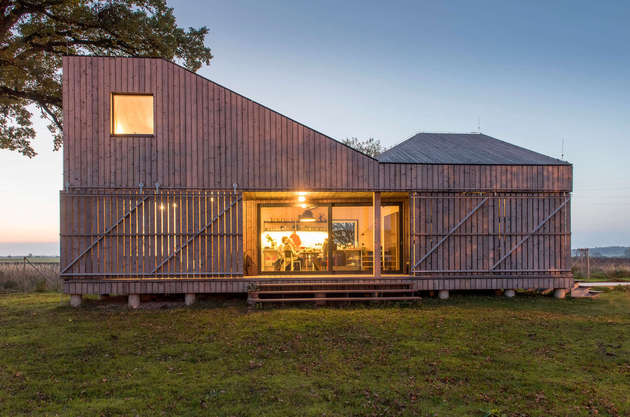 According to architects, it is a low-energy house. The first floor which is the main living area has large windows to take advantage of passive solar lighting in the winter, while in the summer wooden sliding shutters protect it against the sun. The common direction of the winds and the sunlight in the area were also considered when constructing this home. The two ends of the roof are sloped in the opposite directions, creating a very distinct geometric house design. The reason for such an unusual roof layout may have been the desire to lower energy consumption by minimizing the second floor space to the point where there is just enough room for two small sleeping quarters. 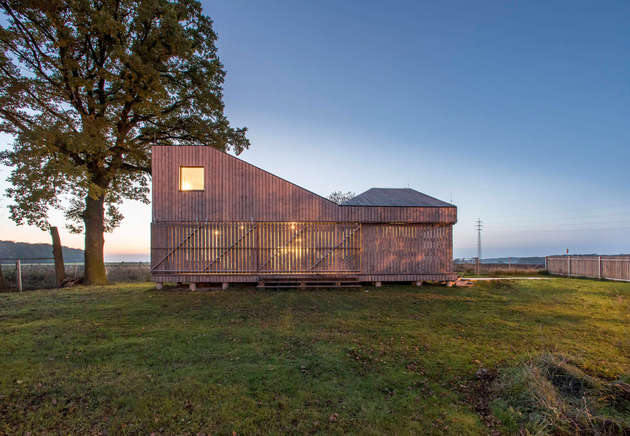 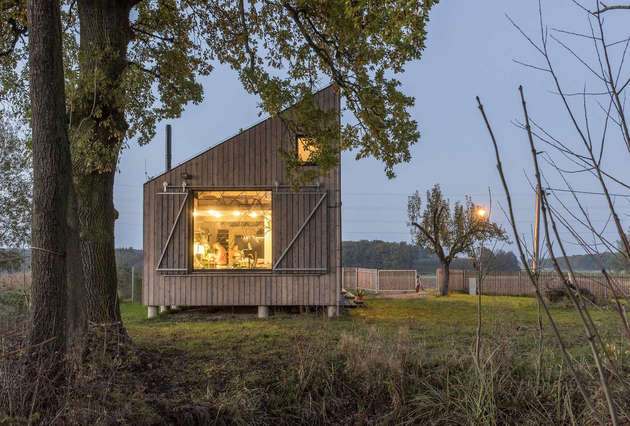 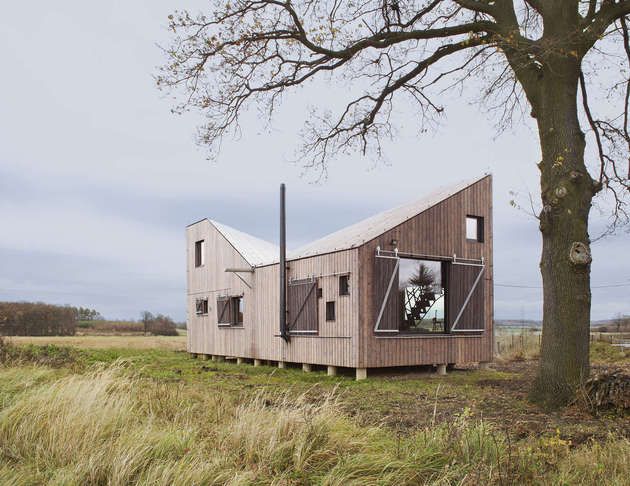 The outer structure is a diffusion open wall assembly, to better control moisture, as it rains quite frequently in the area. The framing, facades, roof and interiors are all made of or clad with larch timber, plus the exterior cladding uses a “burn and stain” technique, for longevity. 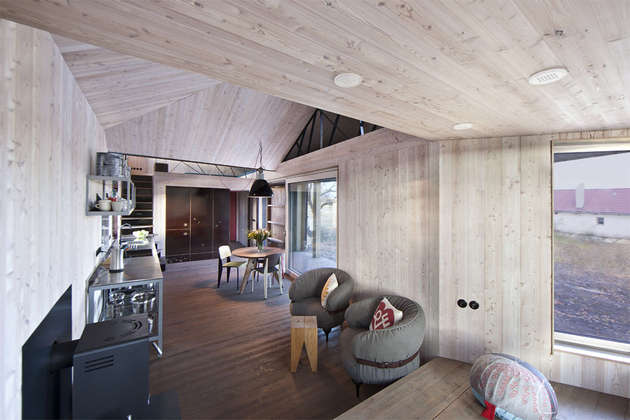 The open plan first floor is practically a continuous lounge space with areas for kitchen and dining and the wood podium where you can sit down and read a book. Plus the bathroom and all the utilities. 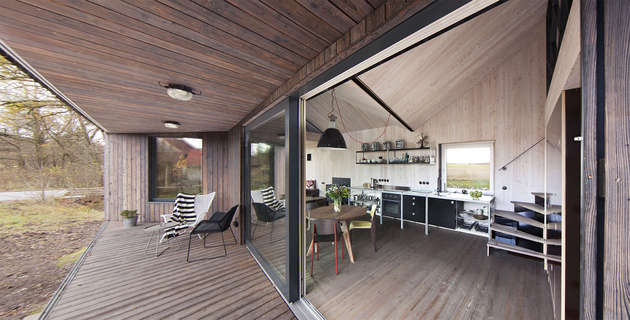 In the middle of that space is the central feature – huge sliding doors with low-E coated glass, also triple-glazed, that open onto a covered patio which in turn opens up to outdoors using rolling shutters. 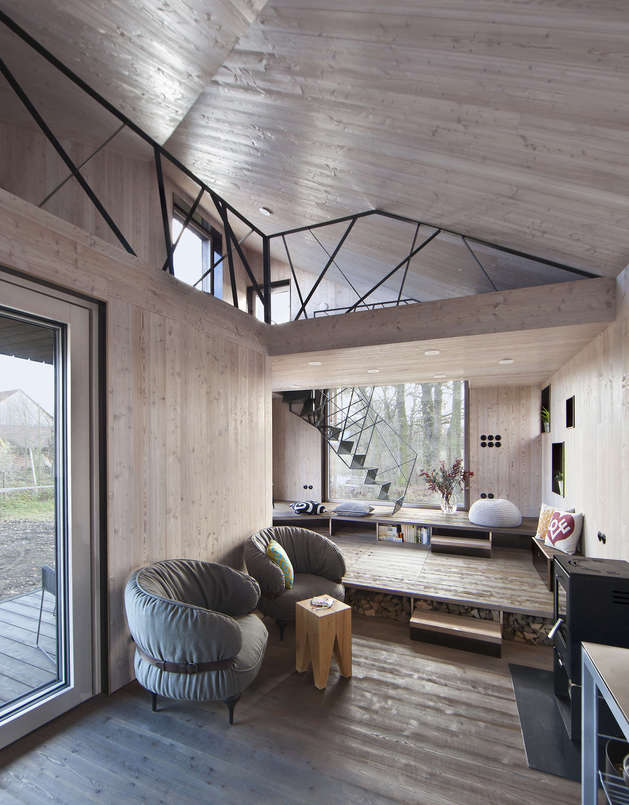 There are two totally differently designed staircases, one at each end of the house, both leading to open bedroom galleries. The metal, industrial looking staircase is welded in steel. The other is made up of plywood boxes with storage underneath. 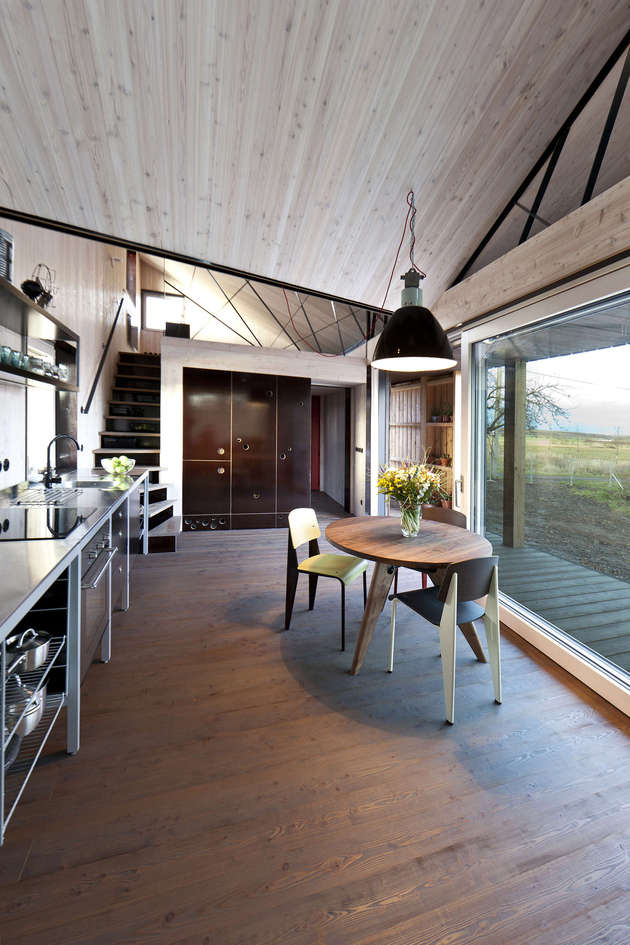 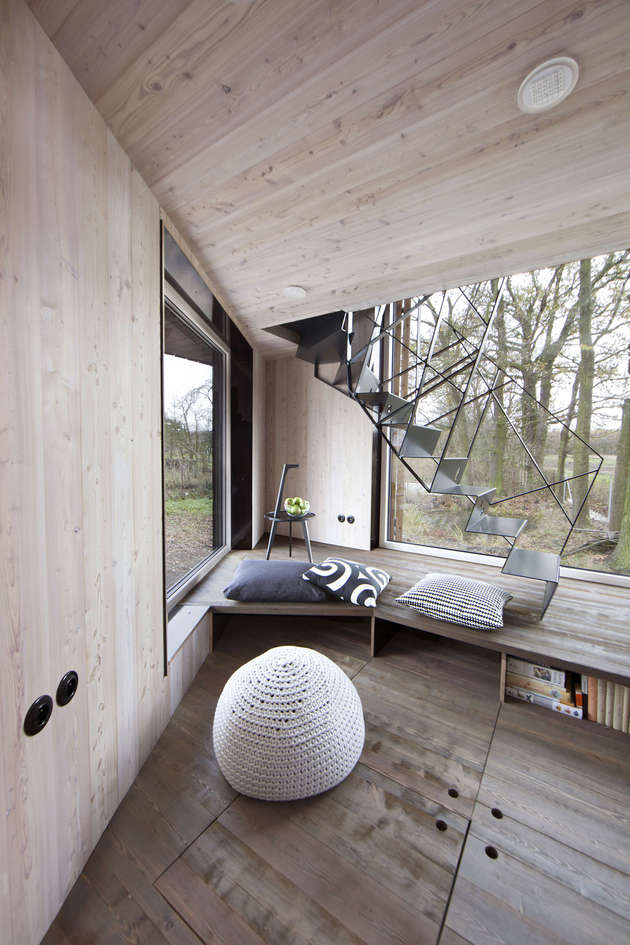 There are additional storage compartments everywhere including some hidden ones. At the podium, the raised, stepped floor is cleverly used to hide firewood for the nearby stove. 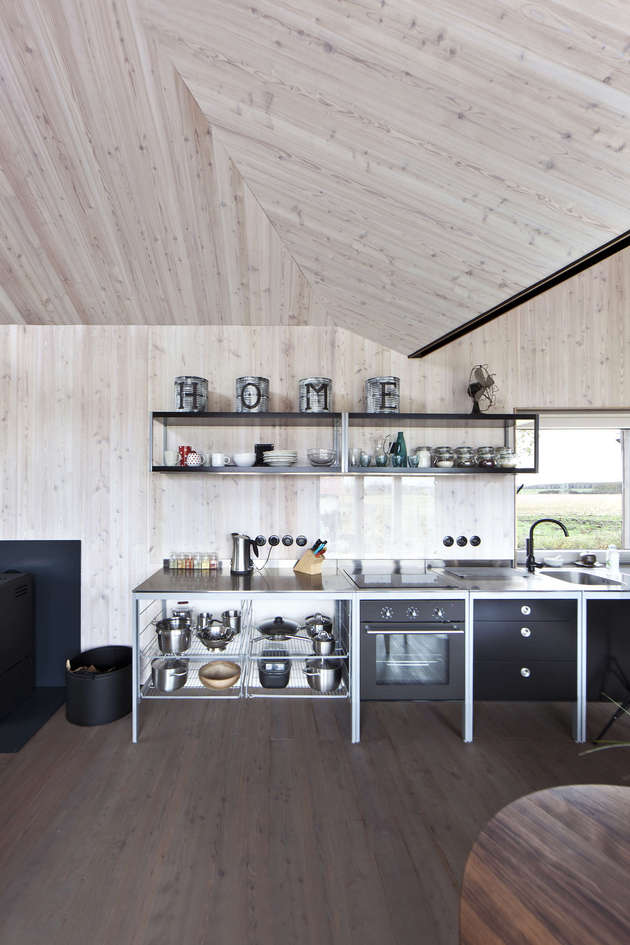 The modern kitchen also has an industrial appeal with its metal open shelving and metal cabinets on high legs. 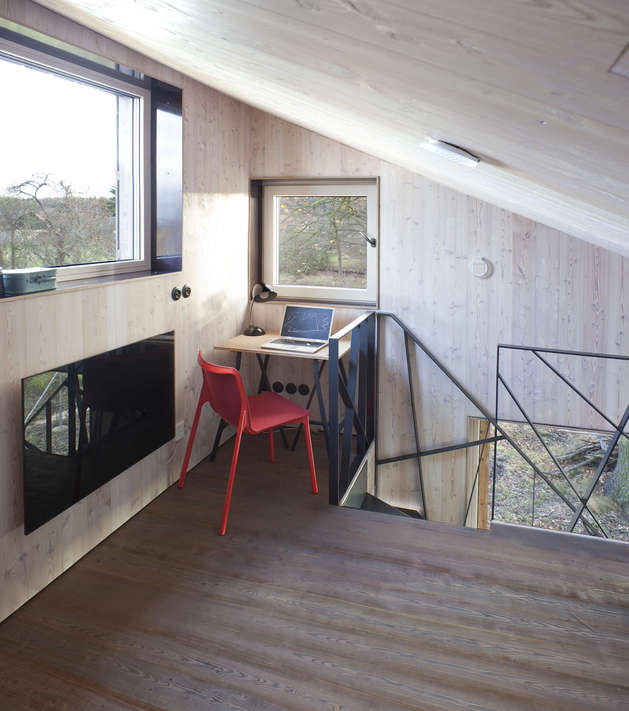 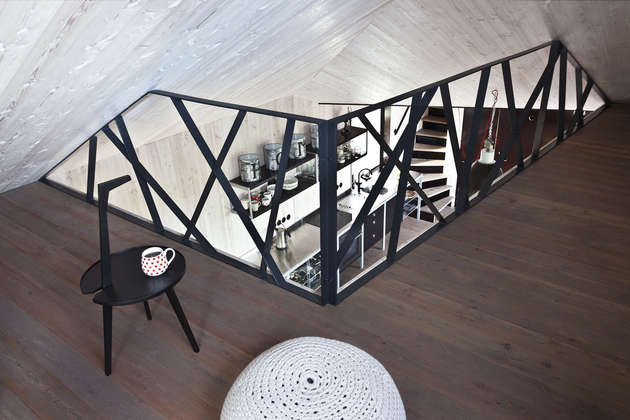 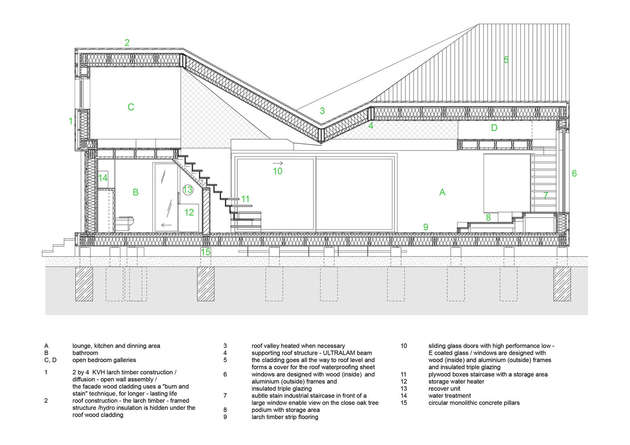 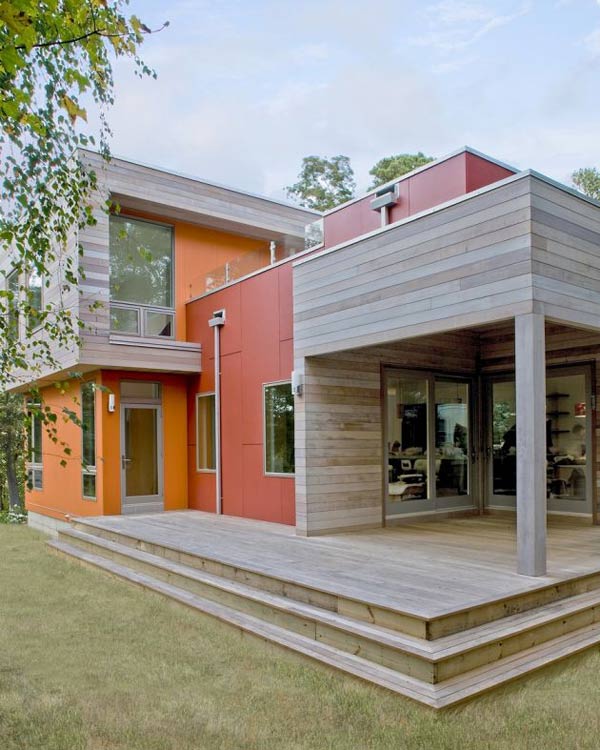 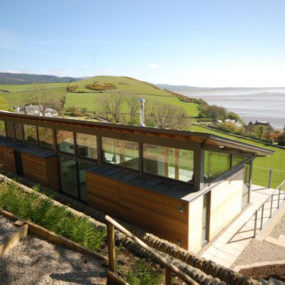 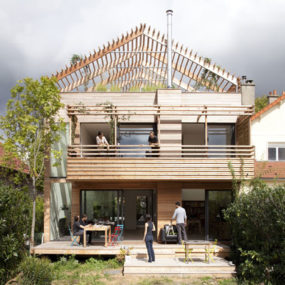 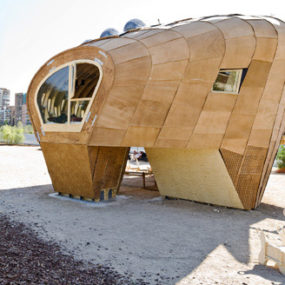