This home, designed by the Basel-based firm of HHF Architects, exhibits a very successful design juxtaposition. Its owner wished for an abode allowing him sweeping views of nature and a complete immersion in its environment, but also stipulated that his own privacy be protected strictly at the same time. The result is this building, a contemporary masterpiece with more glass area than nearly any other house its size. Its placement alone is designed to mitigate privacy concerns, built jutting from a slope so the street-facing side is elevated and set behind a deck. Beyond its utterly clear lower facade and large upper windows are dozens of curtains, proving that sometimes the simplest of solutions is superior. The resident has the opportunity to open up his sights to the country around him whenever he wishes, while also having full power to change that to keep prying eyes out.

Other than a few concrete support columns along each long edge, the ground-floor glass facade of the dwelling is uninterrupted all the way around. Those columns share their coloration with the basin of the home’s night-lit pool, helping to integrate that recreational space into the architecture of the building itself. 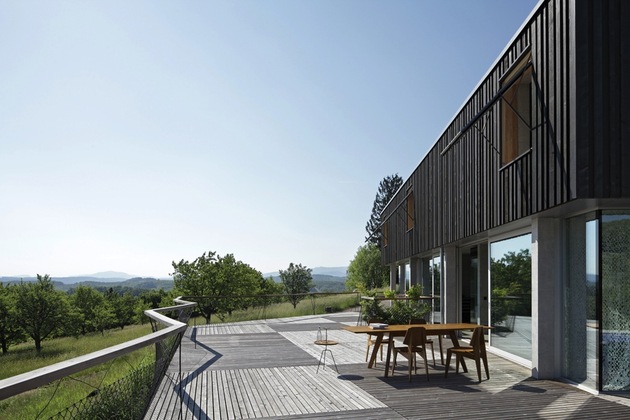 The deck alone is worthy of detailed consideration for its design elegance. Railings zigzag around a patio of large square wood tile sections set at 90-degree opposition to one another. The elevation of the deck above the passing road protects the building’s first floor on the front from prying eyes. 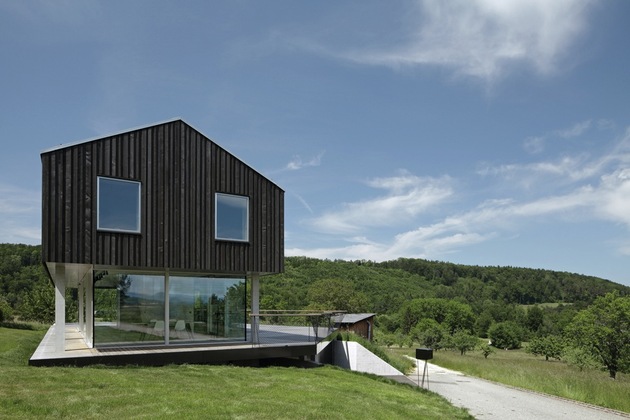 On the side facing the street, the home’s roofline loses its farmhouse-like chimney extension. 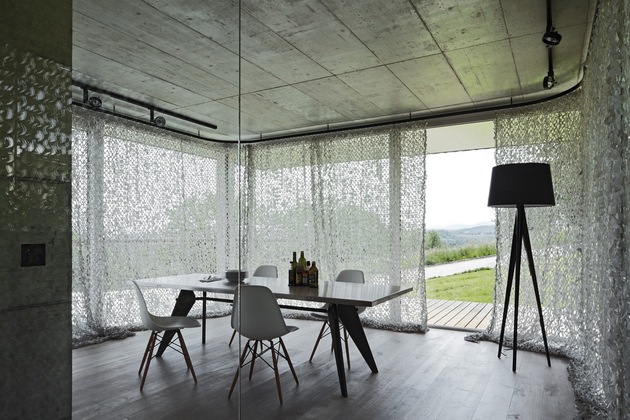 The side of the home facing the street often has its curtains drawn, but those curtains are designed to allow a vague impression of the natural wonders beyond whether open or shut. Each piece of furniture in this dining room has an innovative leg design, bringing angular cues to a room largely defined by its purely vertical and horizontal elements. 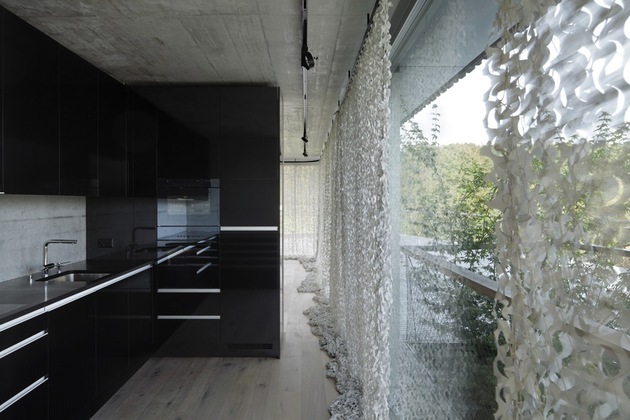 The kitchen is sleek, finished in gloss black and accented by backlit white trim. Each appliance is blended flush into the assembly as well as possible, enhancing its uninterrupted style. 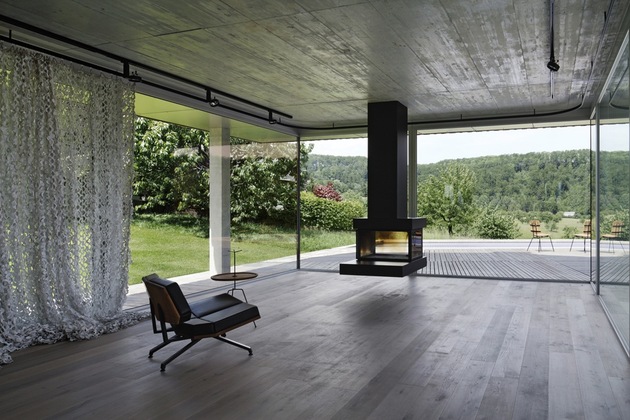 When discussing the minimal nature of the home’s decor, keep in mind that this photoshoot took place after the homeowner had already lived in his dwelling for some time. The chair and table in the living room are the only furniture pieces present from day to day, and the only other major elements of the room are its strikingly geometric hanging fireplace and its gorgeous views. 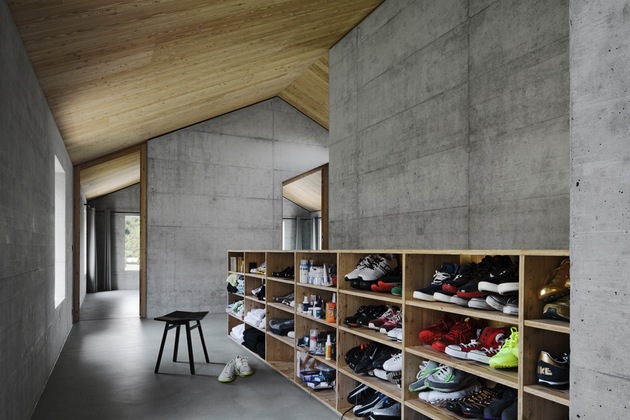 While the overall theme of minimalism carries over from below, the upstairs is drastically different than below, with many more spacial divisions and truly private areas. Still, a sense of openness is retained by the angled arch roof and by the lack of formal doors (entryways are instead defined by angular wall cutouts) on the floor. 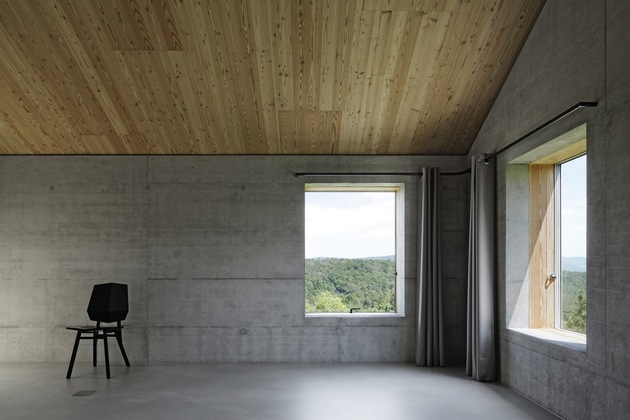 Even the smaller glass presence of this level has some capacity to be observed, so a rack of color-matched curtains is ready to be deployed at every window.
HHF Architects 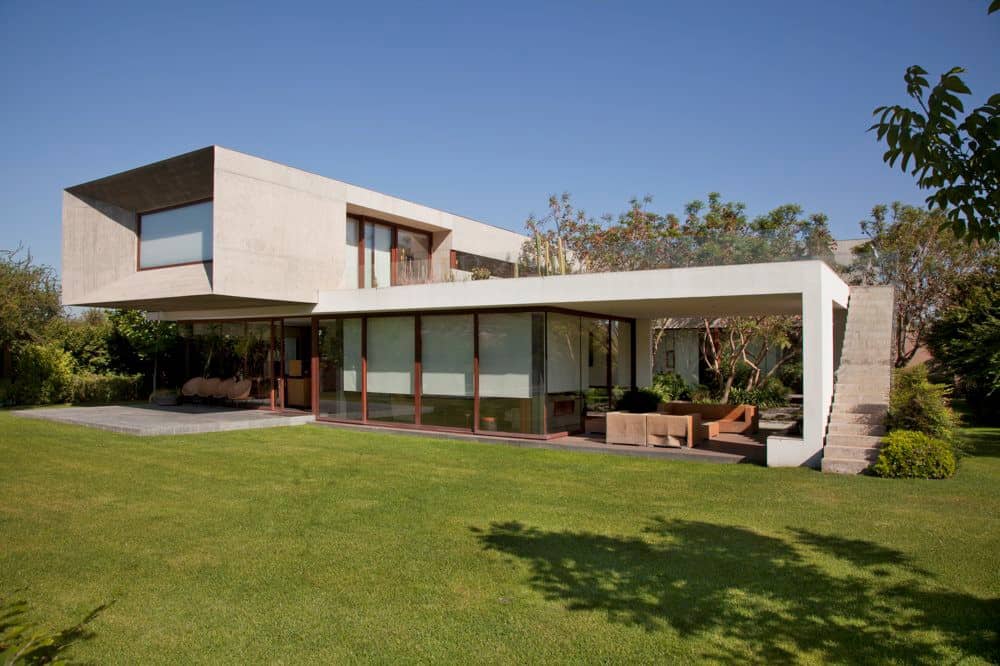 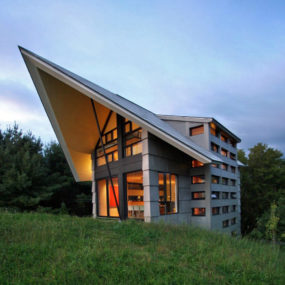 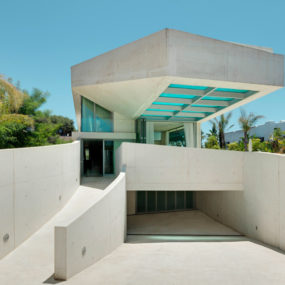 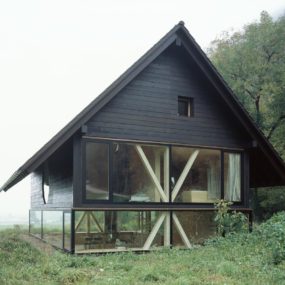 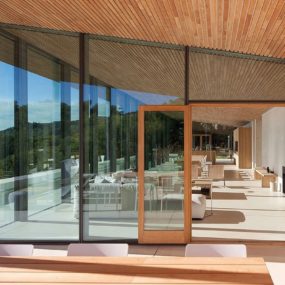