Kelvin House by FMD Architects is located in Melbourne VIC, Australia. The renovation included closing in the existing deck, making it part of the internal floor plan, and then building a new deck that would maximize the exposure to the northern light while at the same time provide shade from the western sun. The deck features a triangular, clear finished wood design, while the interior addition features a three-sided millwork unit stained black. 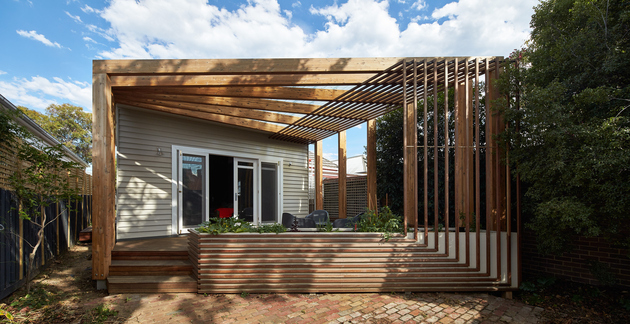 The new deck was given its triangular shape to re-orientate its exposure from west to north. 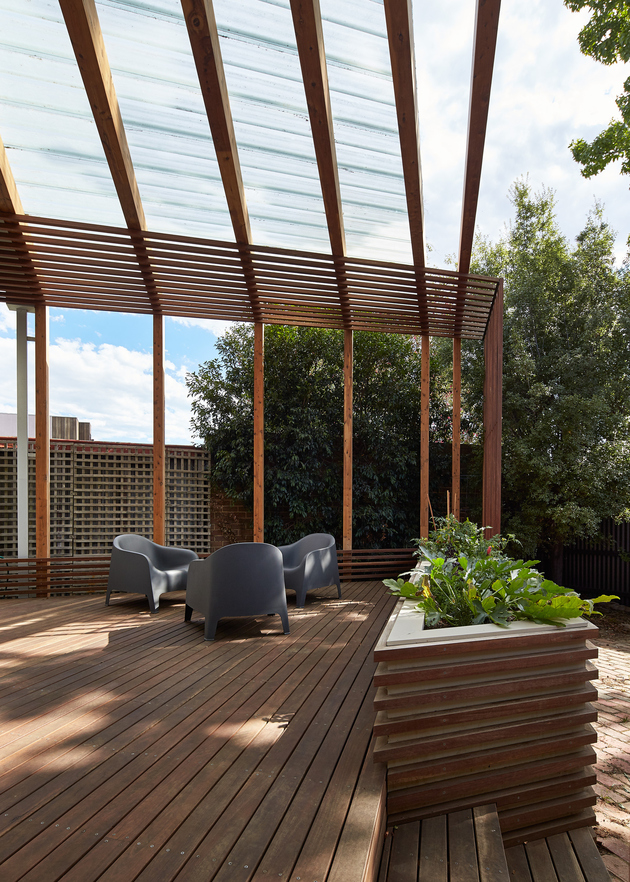 The new deck was wrapped in a post and beam style arbor, with a clear corrugated ceiling and a long planter box on the west face. 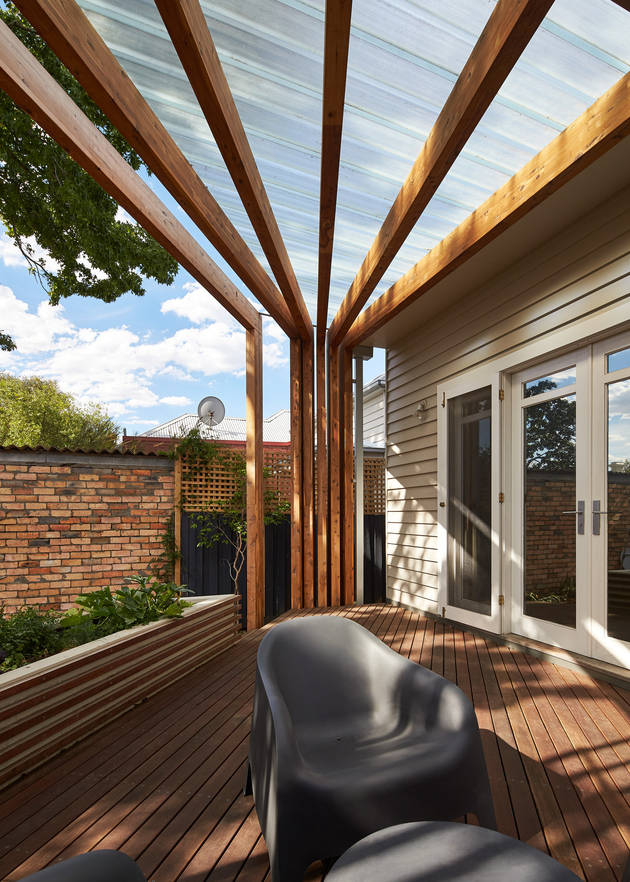 The triangular shape to the deck creates a conversion of the posts, beams and deck itself on north end, leaving just enough room for a landing to the 3 deck steps. 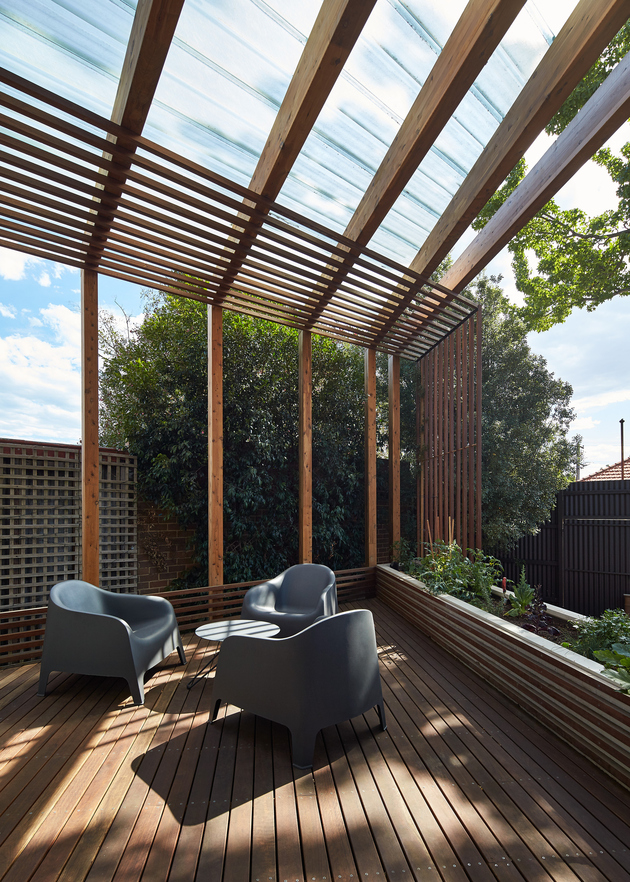 On the south side of the deck, a small outdoor living zone is sheltered from the west by a vertical wood screening pattern that travels from the home’s roofline across the beams and then down the front of the deck to the face of the planter box before turning at right angles and traveling the length of the planter box, creating a unique and very geometric grid pattern. 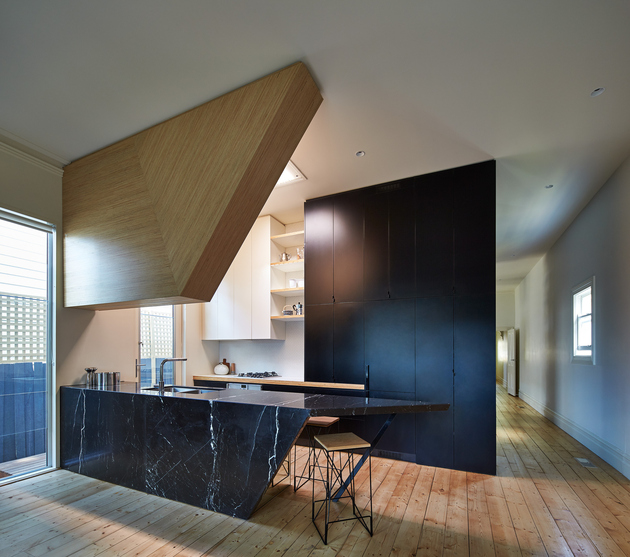 Inside the home, the newly enclosed original deck is now the living, dining and kitchen area with black floor to ceiling millwork defining the end of the addition and the beginning of the original interior. 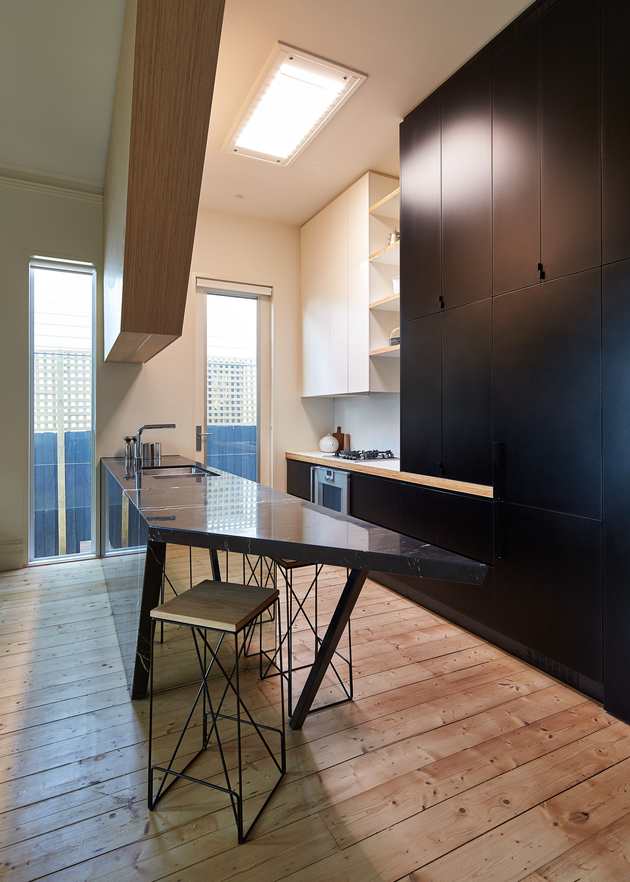 Triangular elements are included in the end of the kitchen peninsula and on the suspended wall unit above the peninsula, paying homage to the shape of the new deck just beyond the back facade. 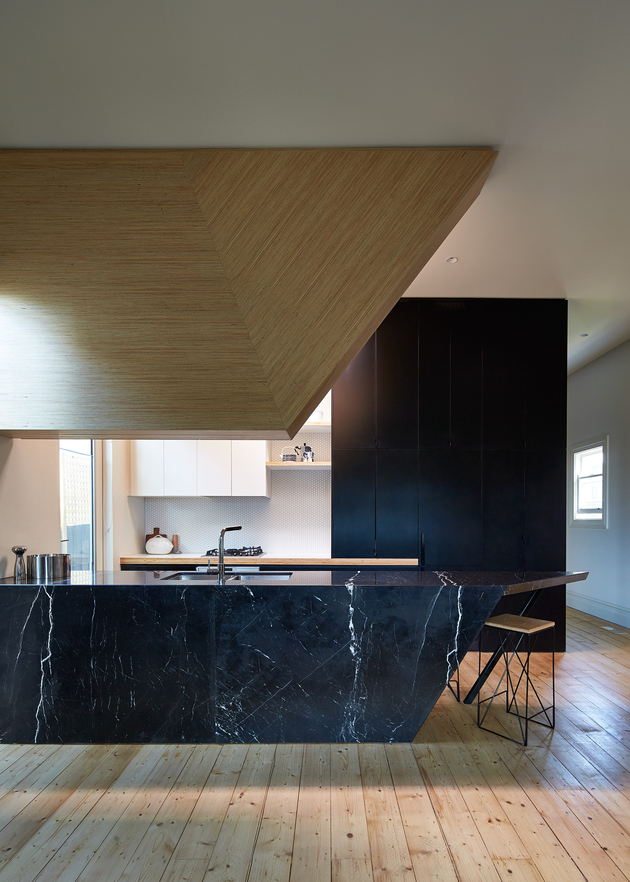 The two jointed sections of wood veneers on the suspended wall section emphasize the angles by folding the wood grain as well. 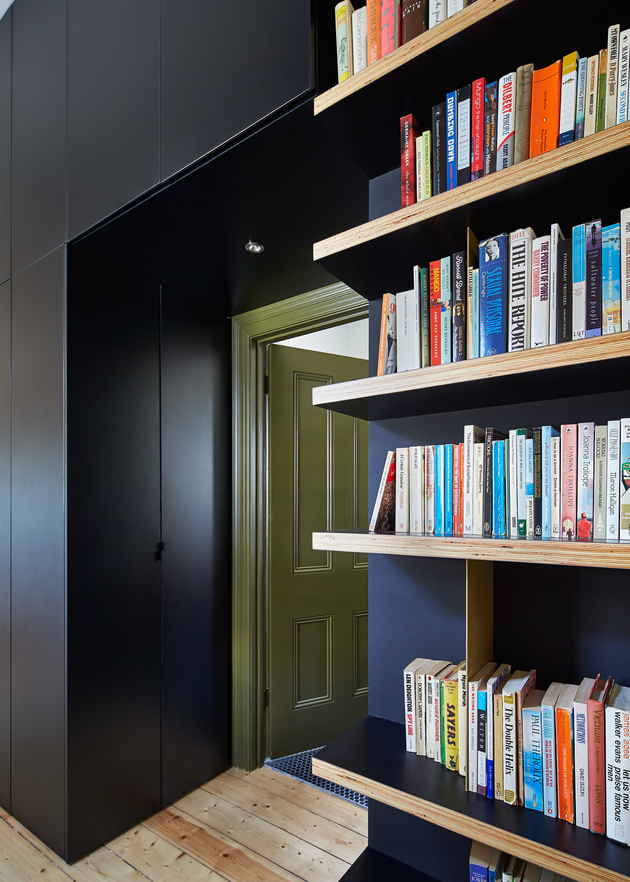 The black millwork is folded as well into a three sided form that hides the homes bathroom/laundry facilities defined by a green door. 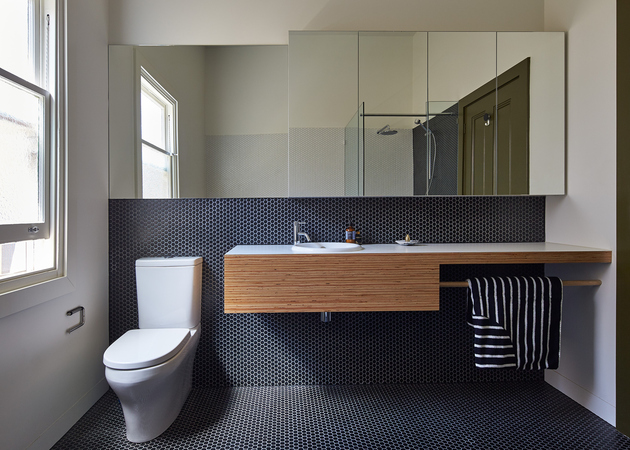 Continuing the black theme, the bathroom is covered in black penny tiles, grouted white, which picks up on the white veined, black marble used on the kitchen peninsula. The floating vanity picks up on the natural, clear finished wood aspect used both inside and out. 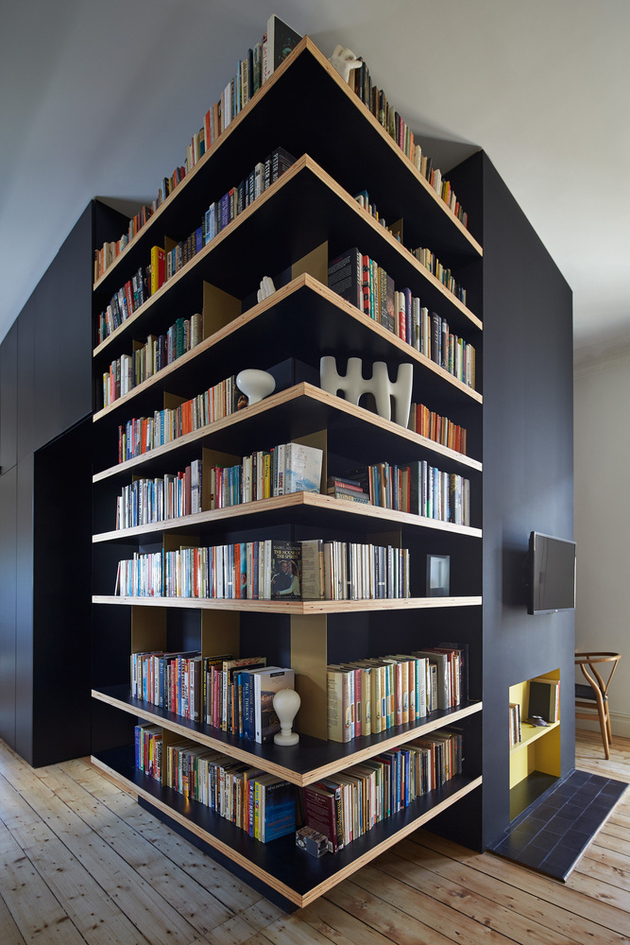 While the kitchen, dining and living areas are on one side of the black box, a family room with media center is located on the other. And the space between the bathroom door and the media center are wrapped in black laminate shelving with clear finished wood edges. 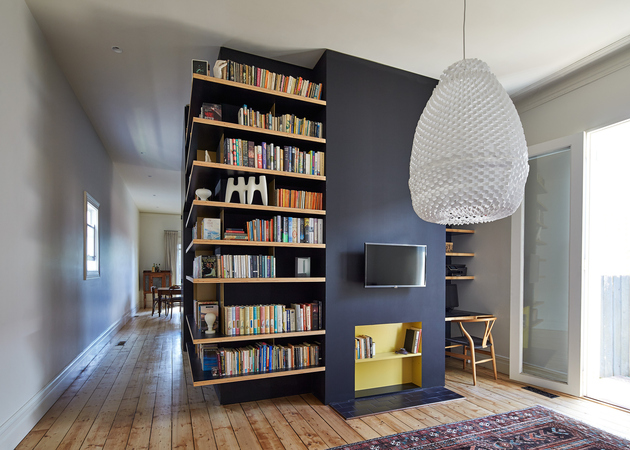 By containing the private bathroom within the black box and leaving a hallway on one side, a continuous visual connection is maintained between the front and the back of the home. 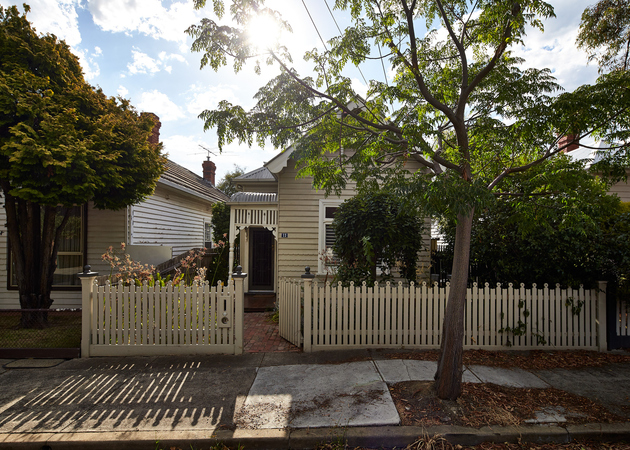 The dramatic and very contemporary design of clear and black stained wood is a well hidden secret from the original, traditional facade of the home, which even has a picket fence! 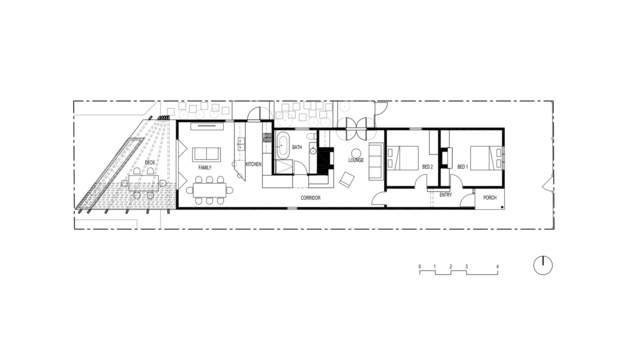 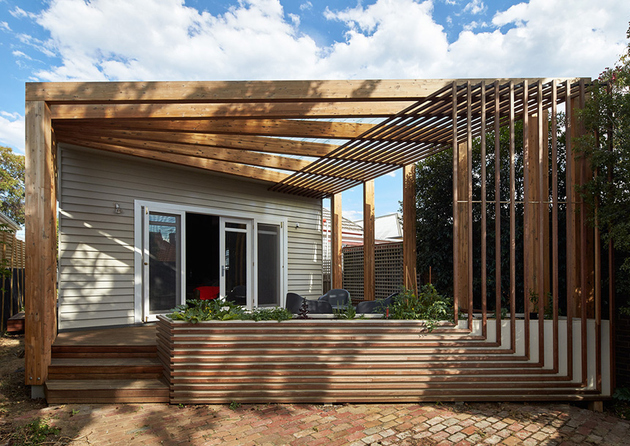 FMD Architects
Photography by Peter Bennetts
The use of black and clear finished wood is becoming more and more common in the design of contemporary homes, with sometimes the clear wood being more dominant and sometimes the black. Even a historic Paris apartment is showcasing a beautiful black interior! 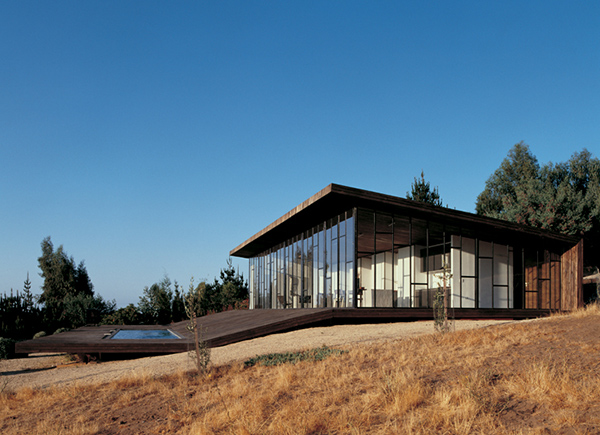 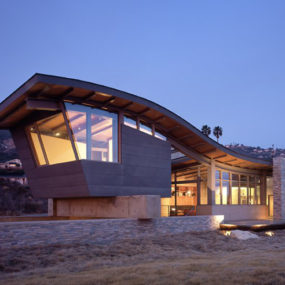 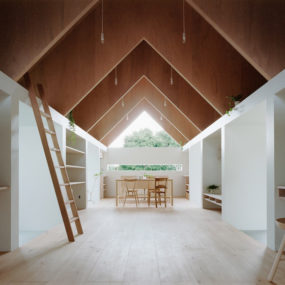 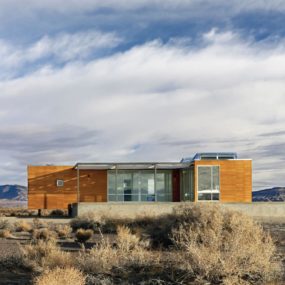