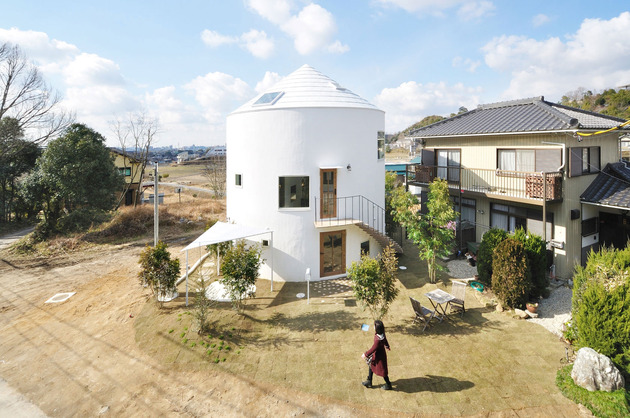 Located in a town not far from the forested city of Sendai, Japan, this unique silo-style home has a dual nature and a number of utterly uncommon elements that distinguish it from many other small-footprint residential designs we’ve seen in the past. Thought up by Japanese architects Studio Velocity, all of the house’s particular appeal is in its structure. The silo shape of the building, keeps the upper floor of the interior from becoming cramped, despite a small floorplan, and numerous traffic-flow aids inside help to open up the space and to provide unobtrusive ingress and egress for rooms on the lower floor. The home’s two stories have very distinct personalities, defined by color palette and material choice, which come together only at transit points between the two. The upper floor’s contemporary structures and contrast in design style from the rooms below it help separate private and public space, while also clearing up square footage and allowing for a compartmentalized lower floor. The house is full of completely original design choices, integrated creatively into an equally exceptional overall shape. 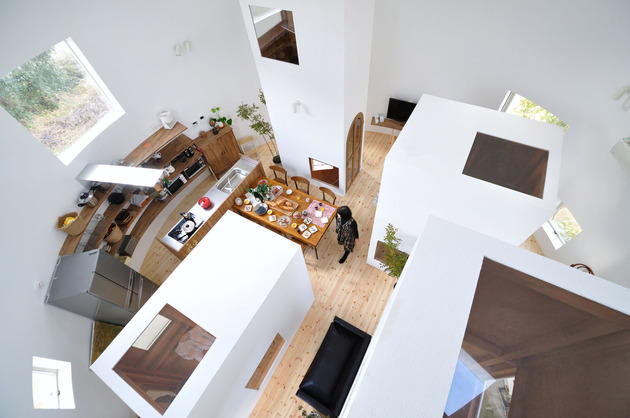 The small house’s interior is laid out in a very unconventional manner, even given its circular shape. Instead of walls, halls, or even partitions, the main divisions between each area of the main floor are a series of four columns of different heights and sizes, each containing storage or a link to another room below. 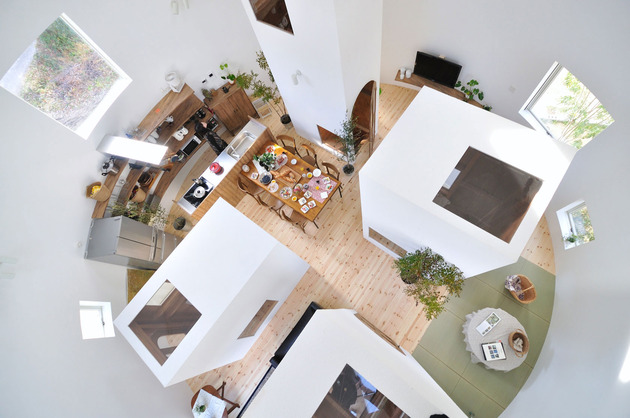 Due to the silo-style construction of the house, none of the living spaces actually feel very small. White paint, plenty of natural light, and sheer height of the main living area combine to generate the airiness of the abode’s design. 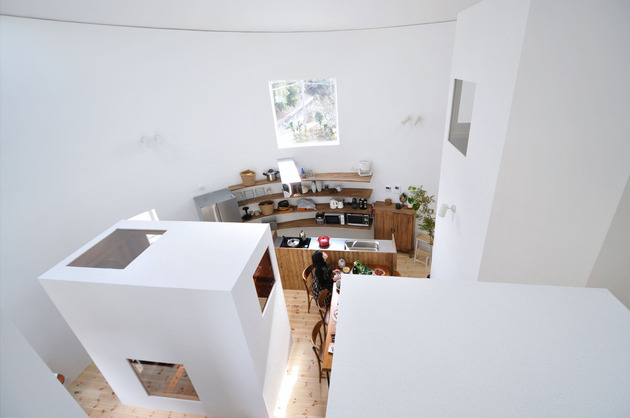 Along with a large skylight and compact angled windows on various points of the home’s walls, a high-placed window sits above the kitchen to provide maximum natural lighting to that entire side of the space. One advantage of the open architecture of the dwelling is the lack of a need for too many windows. 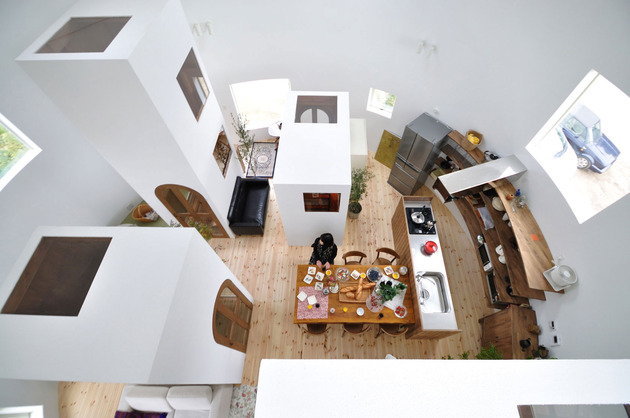 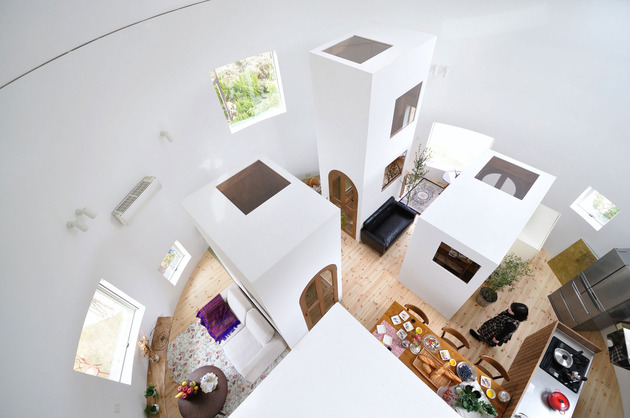 Because each block is oriented or shaped in a slightly different manner than the others, the spaces created by the combination of the four are also non-uniform. The home contains a living room in one 90-degree corner, while the kitchen and dining room make up nearly a third of the upper floor of the home.

A fairly large table fits snugly between two columns, with a finish that nearly matches that of the doors throughout the open space. 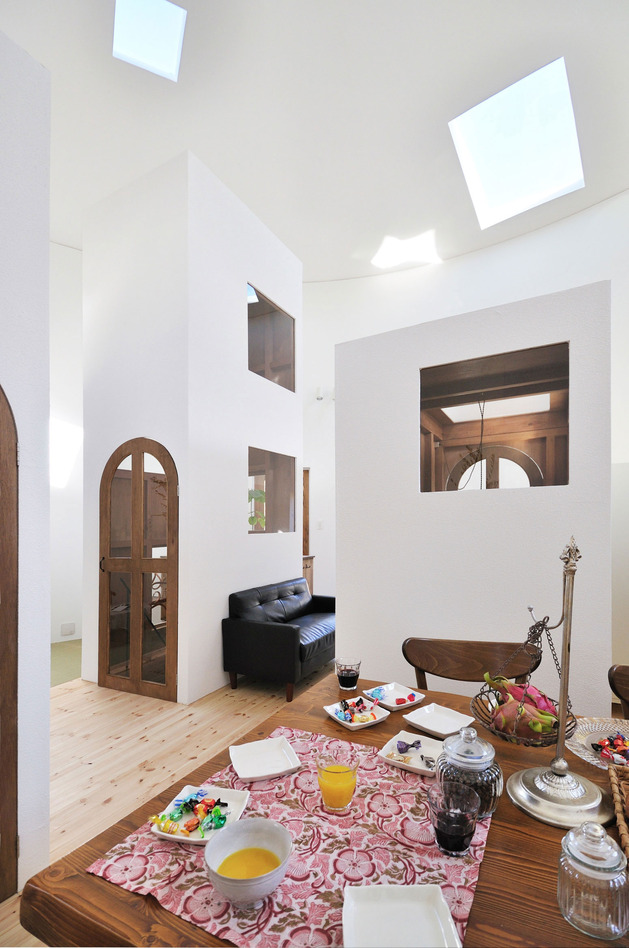 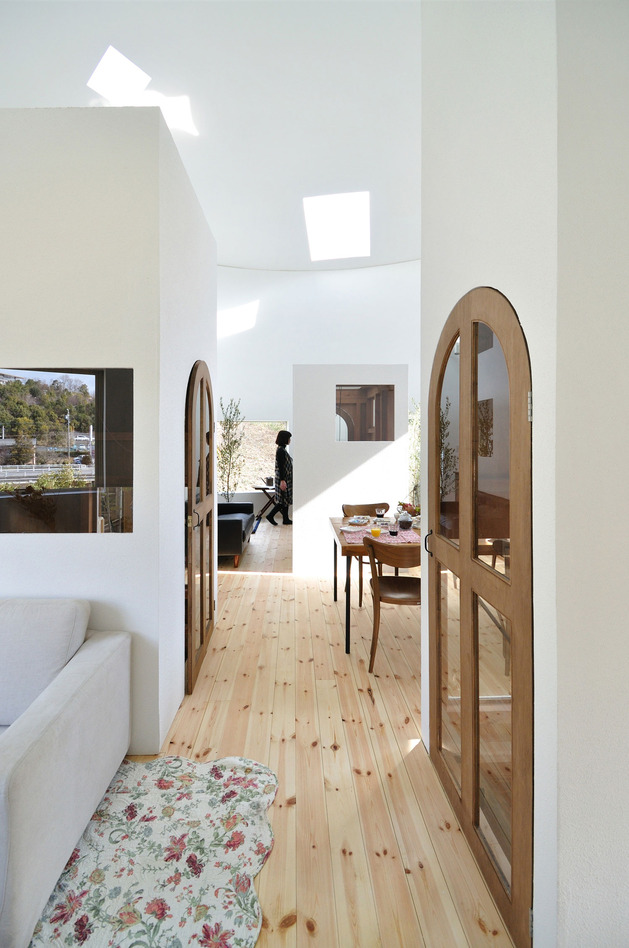 Each block is spaced in such a way as to form hallway patterns throughout the living space without the need for actual, walled-in corridors. These open traffic spaces also have entryways to each column oriented in a manner reminiscent of a traditional hall. 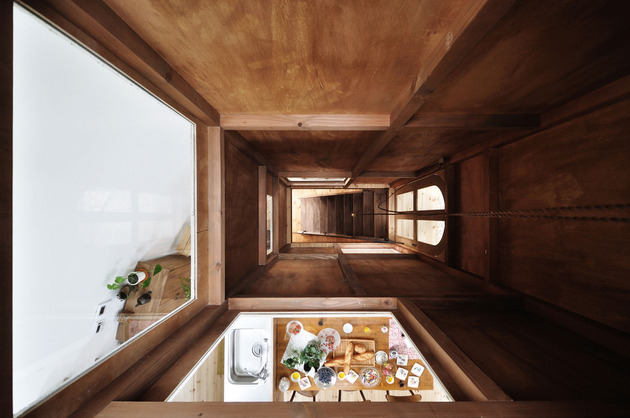 Each rectangular pillar contains a pathway to more living space, with stairways descending into low-ceilinged bedrooms and other non-public areas. This system neatly tucks away personal spaces in a discreet and chic manner. 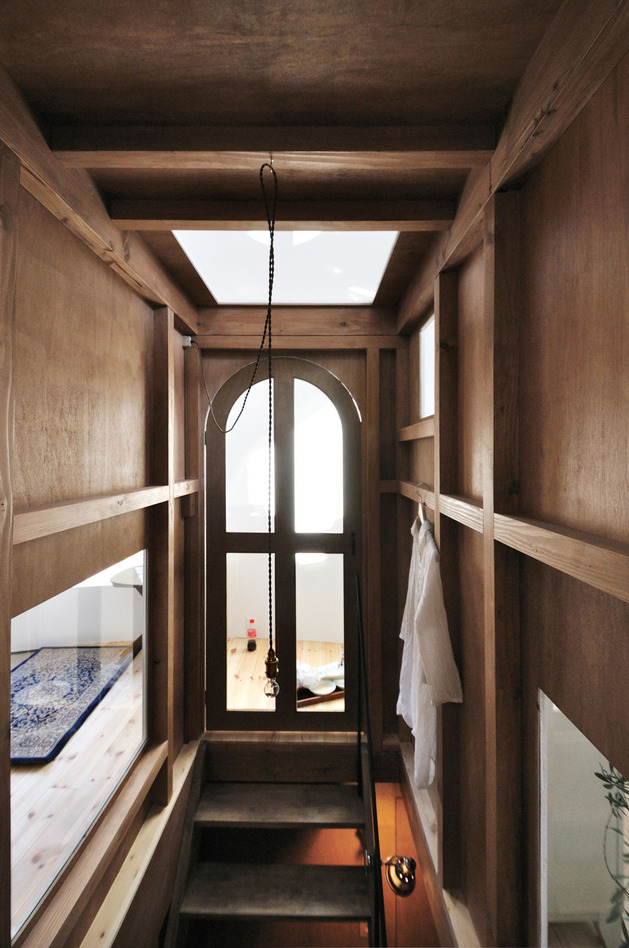 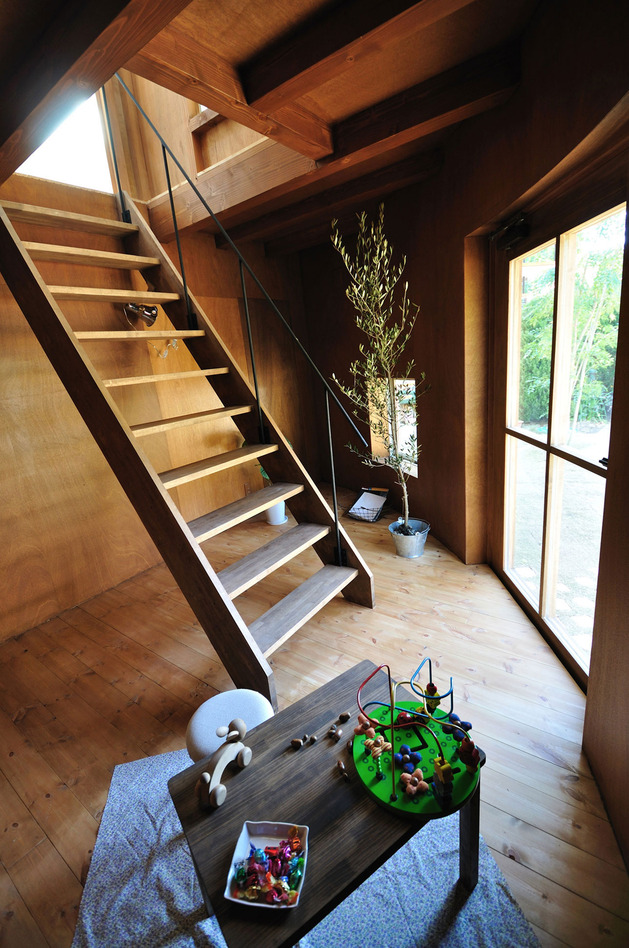 The entryway is built similarly to every other ground-level room in the home, with darker tones suggesting a private evening respite from daytime activities. 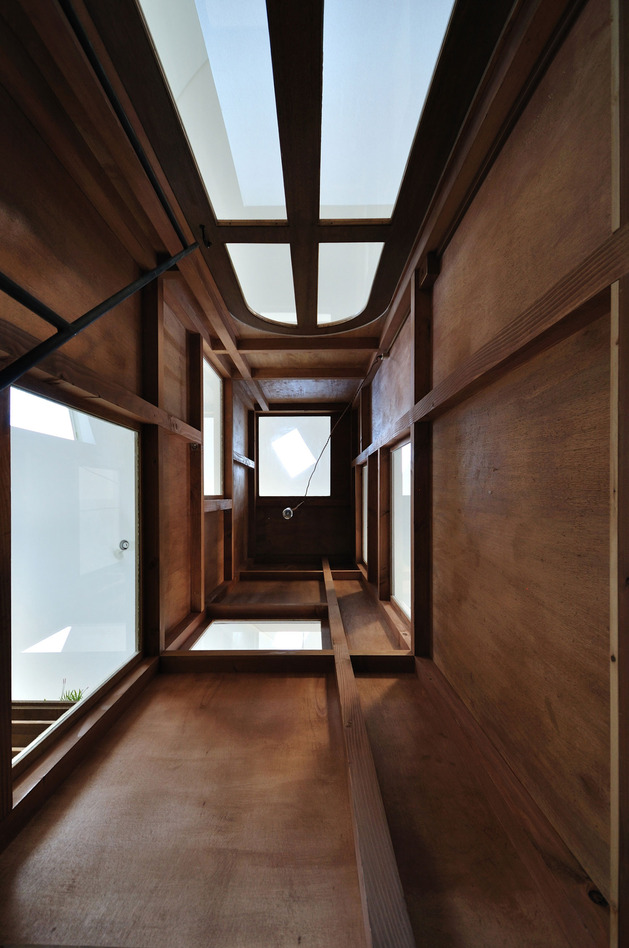 Looking back up the towering entrance pillar is almost a medieval experience, framed by arches windows and dark wooden structures.
Studio Velocity Architects 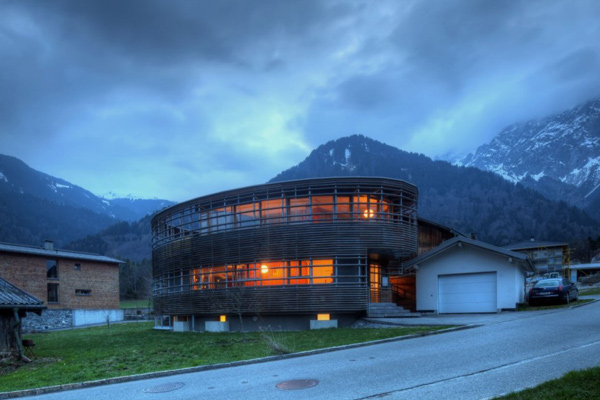 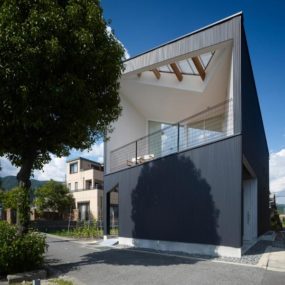 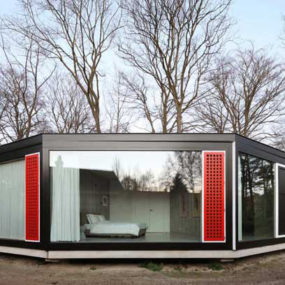 Circular Home Architecture Makes The Most of the Views 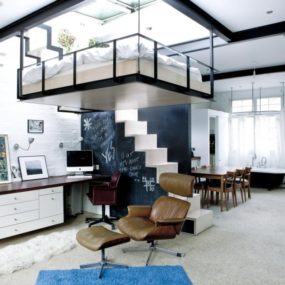 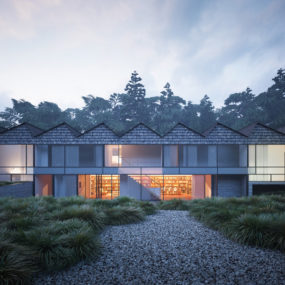 Saw-Roofed House with Circular Layout is All About Symmetry 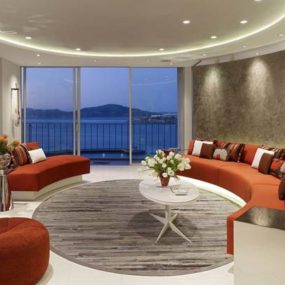 Circular Home Architecture Makes The Most of the Views

Saw-Roofed House with Circular Layout is All About Symmetry