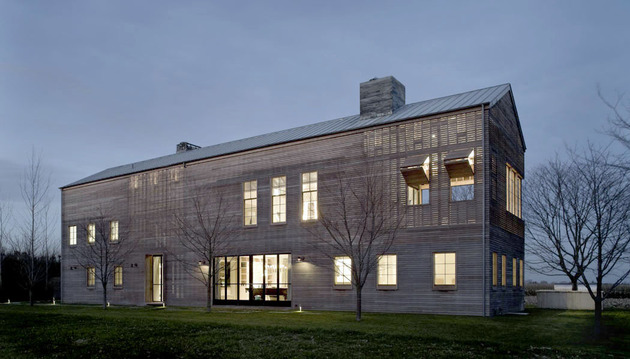 Designed by Leroy Street Studio, an architecture firm with firm urban roots and a Manhattan main office, this countryside home honors its geographical roots while also reinterpreting the styles of rural New England in a modern light. Based on the general theme of a slab-side barn or estate house, the home features wooden siding and two large chimneys. Many of its windows are also rather traditional, set up in rows of small multi-pane arrays. However, an extreme amount of creativity has been applied towards re-imagining the architectural traditions of the region, and the result is a broad house with thoroughly modern structure and amenities. Its interior is vast and open, with a focus on making each room chic instead of just stuffing the building with dozens of rooms. Additionally, a number of spaces that walk the line between inside and outside are included in the design, with free flow of air underneath the shelter of a roof.

Though its overall shape suggests traditional agricultural styles of upstate New York, all of the home’s details reveal its extremely modern nature. Decks are integrated into the lines of the building, and public rooms of the house are set in areas with large windows and views of the property. 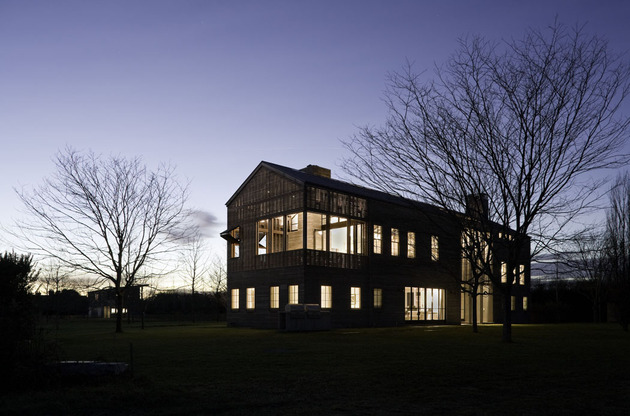 By night, the light streaming out of the house reveals where the slats give way to the open-air frame of the structure and where the solid walls line up directly with its exterior. A stone-floored patio at one corner leads to an outdoor area for grilling and recreation. 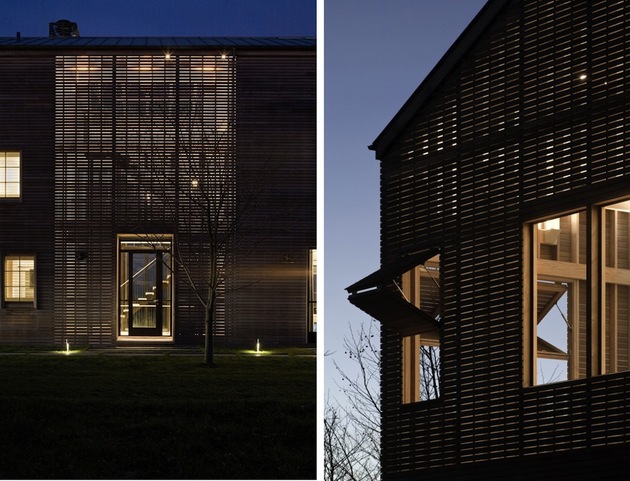 At its entrances and in key indoor-outdoor rooms, free flow of air is allowed through the building from one side to the other. These areas sit under the same roof and by virtue avoid most of the elements, but they allow the residents a closer connection with nature. 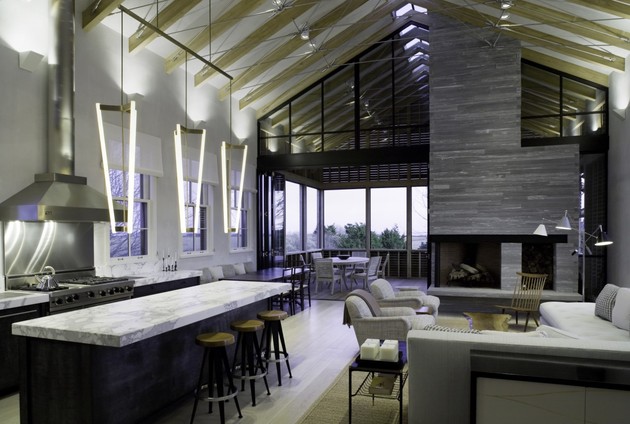 Despite its massive outward appearance, the home’s public rooms are only a single story inside, stretching up to a vast ceiling slope and revealing much of its wooden structure. The main room of the residence consists of a spacious living room and kitchen combination, with an impressive fireplace at one end and a hallway to private spaces at the other. The kitchen is lit by a series of artistically-positioned tube bulbs. 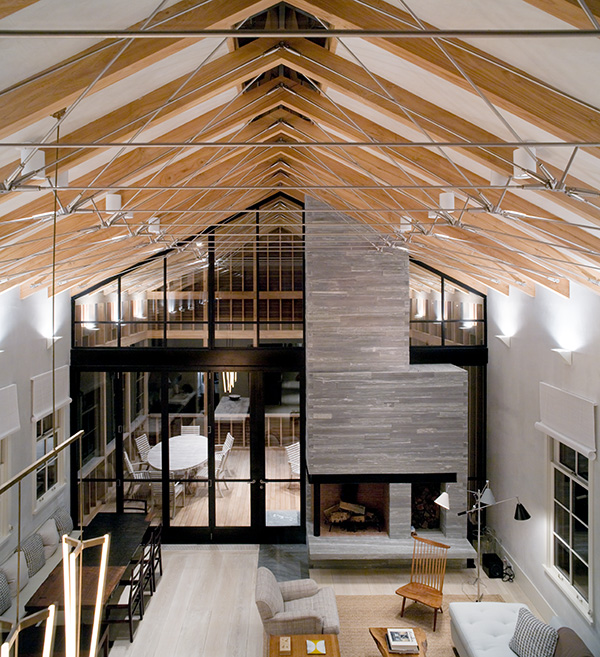 At the ceiling’s crest, a subtle strip of glass is formed from the retraction of ceiling panels on either side, allowing a shaft of sunlight in by day and a view of the stars by night. About fifteen feet up each wall, a series of lights illuminates the tall ceiling to make sure it truly adds to the space instead of disappearing. 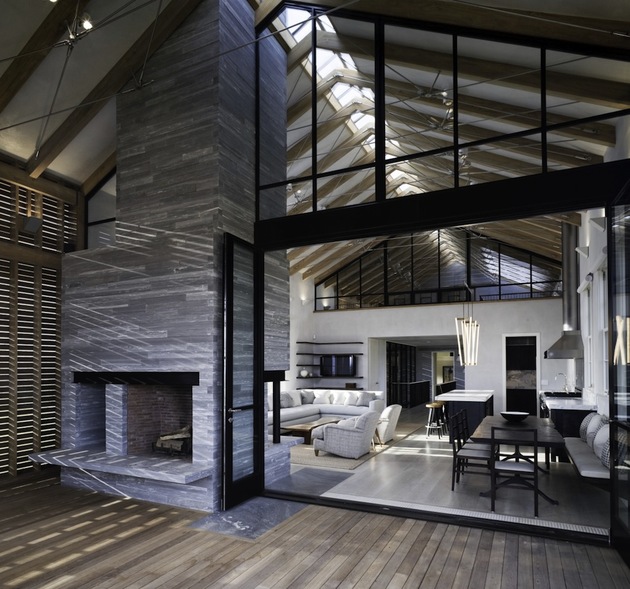 At the public end of the dwelling, an indoor-outdoor patio provides space for hosting events or simply getting away, with the breezes of the countryside coming through wood slats and the warmth of the double-sided fireplace keeping the temperature comfortable. 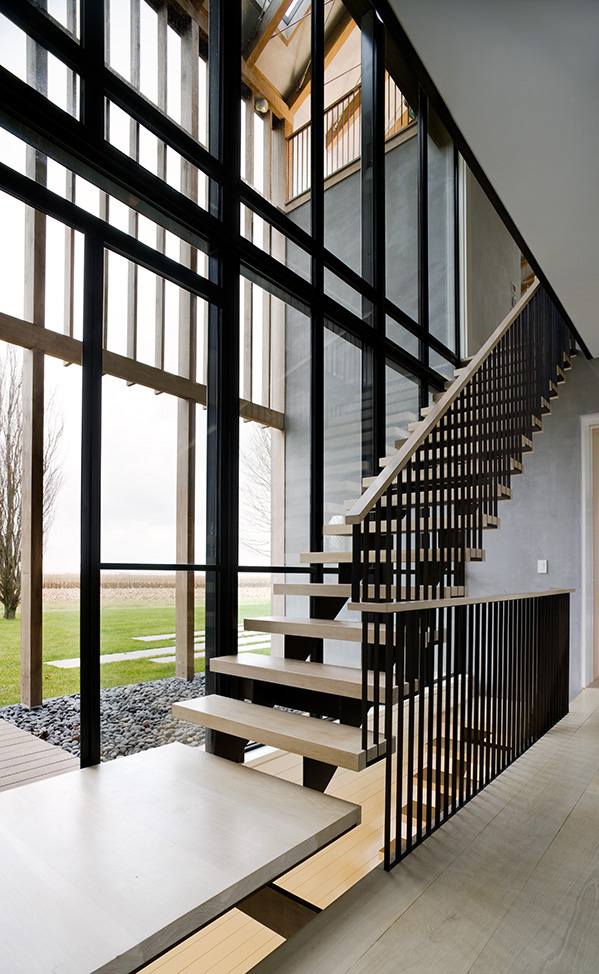 Up a flight of stairs inside the house’s entrance, the more private, personal rooms of the homeowners are found. The stairway is located to provide easy access for anyone wishing to quickly head to a private room, but also to be conveniently out of the way of public space. 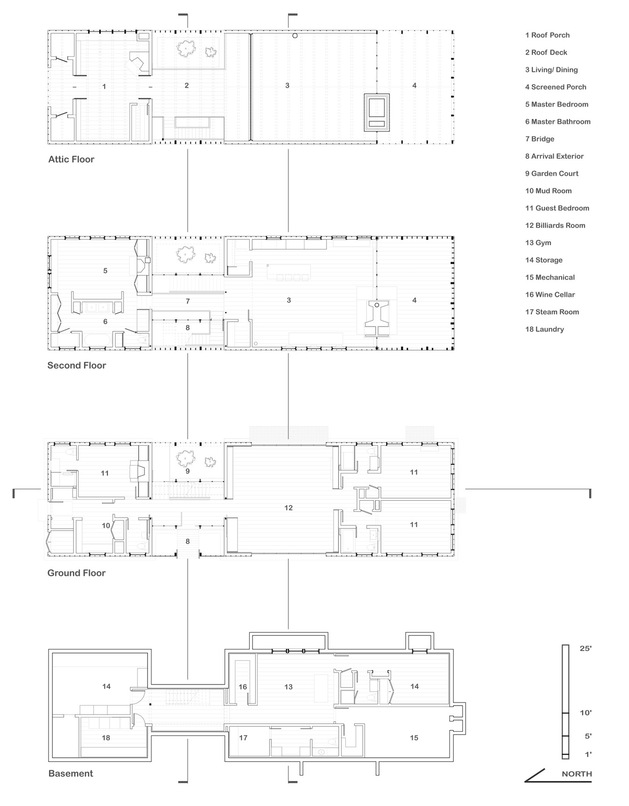 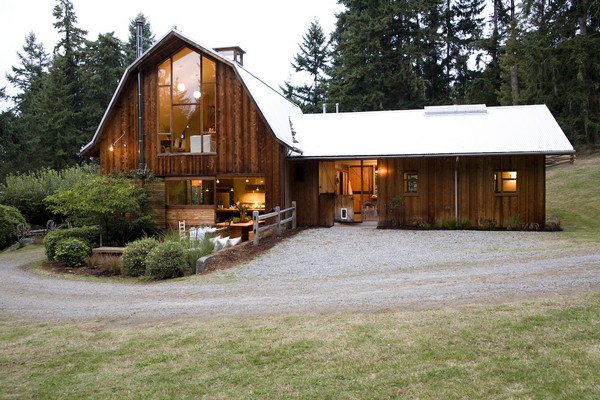 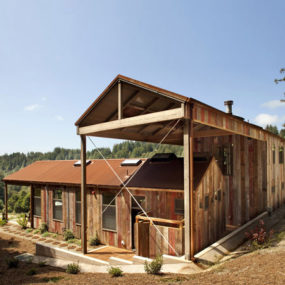 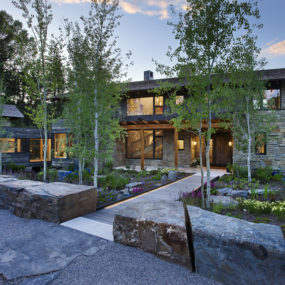