The Amazing Creativity and Craftsmanship of Allan Lake Furniture

Each piece of Allan Lake’s furnishings is made from traditional British Hardwoods that come from sustainable woodlots. Some of Allen’s designs feature layers of different woods that have been glued and clamped together before being cut into curvaceous silhouettes, others present sections of wood that are relief carved and then stained with bold colour hues, while still others feature the living edges of the wood itself. Whichever direction the furniture takes you can be guaranteed that Allan has handmade and hand finished each with the eye and hand of the artist that he is.

The Starburst Bedroom Suite is a one-off collection that uses a combination of woods to create the stunning elements within each design. The woods are as follows; Ripple Walnut, Ripple Sycamore, Burr Elm and English Yew. The suite consists of a bed, blanket chest, tallboy and mirror and the bed has the added feature of textured stained glass inlaid into the bedhead and footboard. 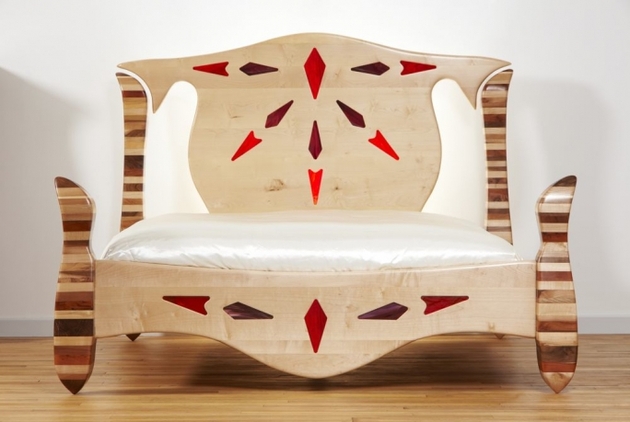 The arrow and diamond inlays of purple and red textured stained glass within the Starburst Bed adds a dramatic and contrasting geometric element to an otherwise curvaceous design. It is as though the starbursts of glass are pointing to the curvy voids within the bedhead and footboard as well as to the carved layers of the multiple laminated woods within the four posts. 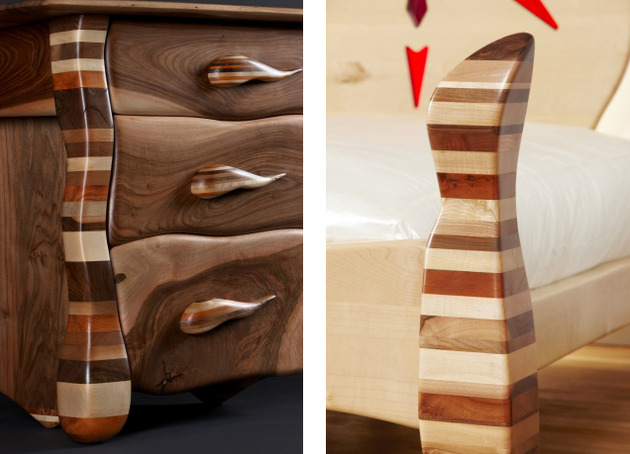 The beautiful layering of wood within the Starburst Collection is a feature that is also presented in the Rainbow Desk. While the laminated effect is stunning on its own, Allan has taken it one step further by carving a non-uniform shape out of each post and then bullnosing the edges to create a natural and organic pillar each with its own unique silhouette. 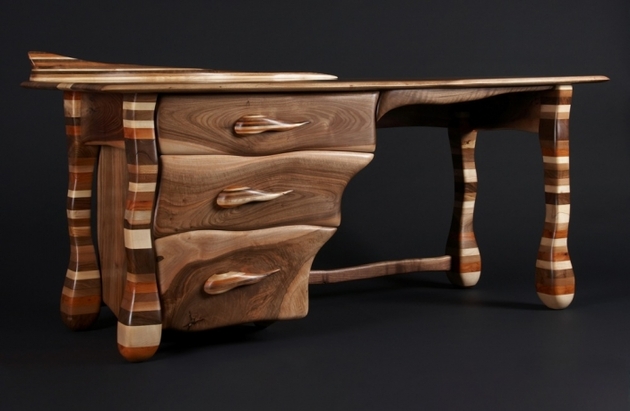 The Rainbow Desk is made with Ripple Walnut, Sycamore, Elm and Yew woods. It is comprised of 3 drawers made with dovetail joinery and custom handles of laminated woods. The desk is a limited edition series of four and 1 through 3 are already spoken for. 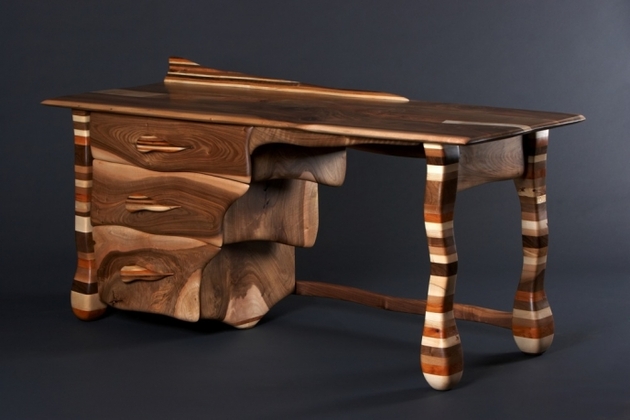 The combination of the layered woods within the four laminated legs next to the natural graining on the drawer fronts and desktop creates an interesting contrast between linear and flowing lines that is somewhat lessened by the purposefully random curves within the leg profiles. While most desks have a static and boxy feel, the Rainbow Desk is far more fluid and way more exciting. 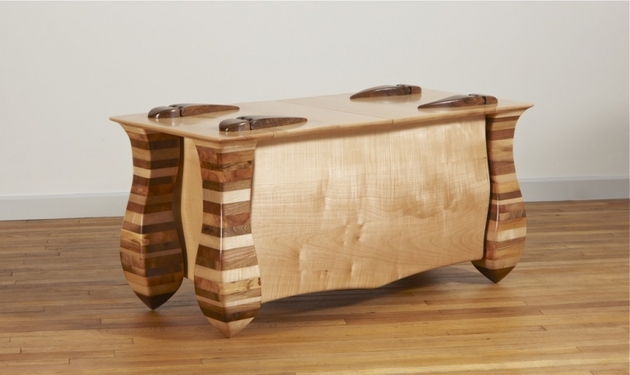 The Starburst Blanket Chest uses the same laminate wood construction as the Rainbow Desk but the outline of the legs is decidedly different. Here the legs have a heavier and simpler profile that is kept light by the coming together of all four sides into a tapered point at floor level. Made with Ripple Walnut, Ripple Sycamore, Burr Elm and Yew. The chest has the additional focal point of four handmade Ripple Walnut hinges. 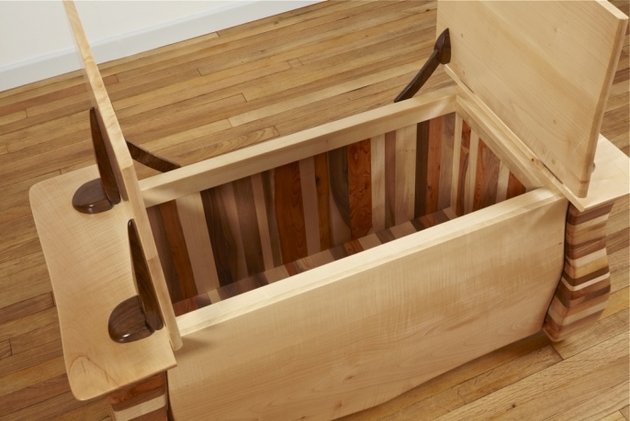 The one of a kind Starburst Blanket Chest opens with a double lid to feature a “starburst” of wood hues lining the interior. While the legs feature the woods in a horizontal profile, the interior converts to a vertical display. The lid support mechanisms allow the two sections to stay open for ease of loading / unloading “blankets” or other items. 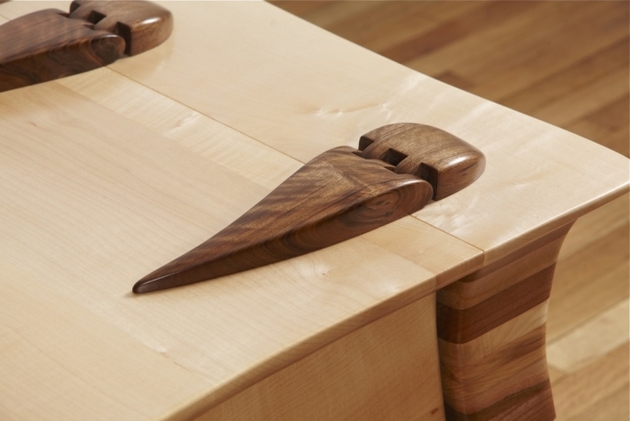 The artistry and craftsmanship within Allan’s work is on full display within the four hinges of the Starburst Blanket Chest. These four functional items are presented in a lithe and lyrical manner that has been given as much importance as the chest itself. 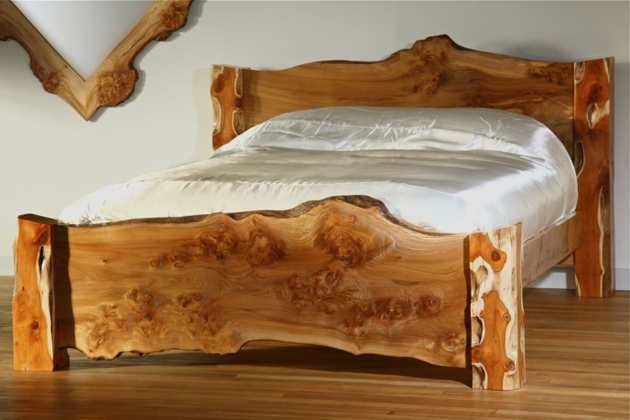 While Allan excels at creating curves within his pieces, he also likes to feature nature’s curves such as the living edges of the Refined Rustic bedframe seen here. King Sized and made from Burr Elm and Yew the contours and graining of the thick Burr Elm bedhead and footboard is stunning. Allan has made three Refined Rustic bed frames each with their own unique character. 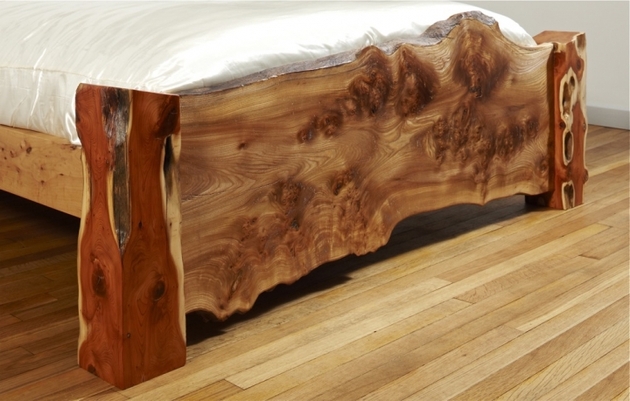 Although the Yew legs used in the Refined Rustic bed frame are rectangular in nature, Allan has finished the top plane to flow with the lines of the living edge within the Burr Elm planks. He has also let the natural wany-edge of the Yew legs break up the vertical planes for an individual and rustic aesthetic. 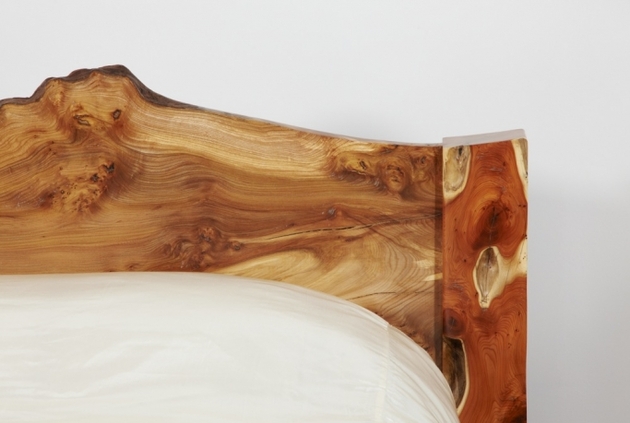 The combination of the Burr Elm and Yew presents a contrasting example of wood grains that – while completely different – offer a harmonious spectrum of wood hues from yellow to red to blue. 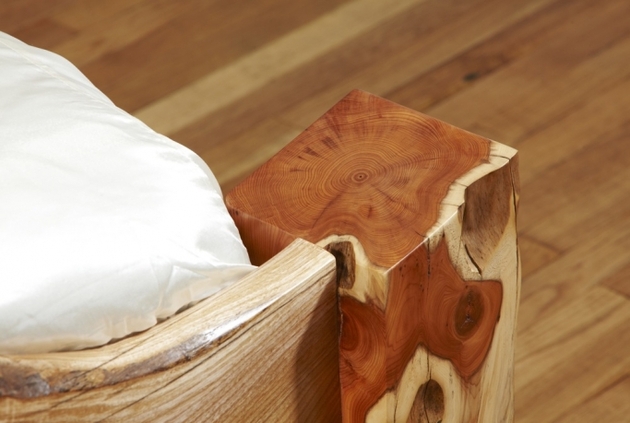 While the Burr Elm offers tone on tone shades of wood, the Yew is an abstract pattern of contrasting hues in a mottled pattern of lights and darks. There is something whimsically wonderful about this natural presentation. 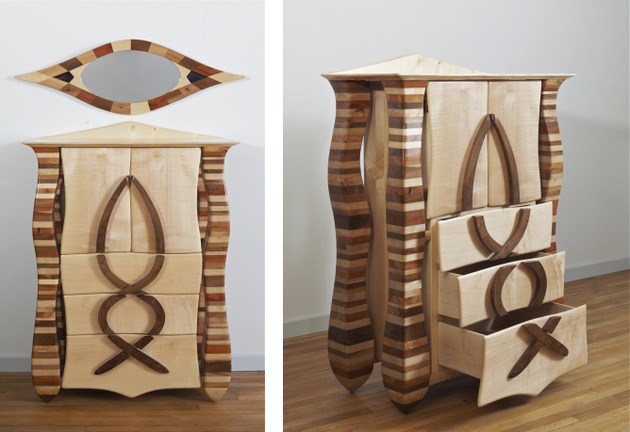 The Starburst Tallboy is part of the bespoke Starburst collection and features intricate Walnut handles on 6 drawers with dovetail joinery and laminate hardwood bottoms. A bonus feature not readily apparent is a secret compartment only accessible when the drawers have been removed. Made from Ripple Walnut, Ripple Sycamore, Burr Elm and Yew, the tallboy also features bulbous laminate sculpted legs that taper to a point at floor level and cheekily curve away from and towards the drawer sections leaving small voids along the way.
The creativity and craftsmanship within these Allan Lake designs is truly awesome.
Allan Lake Furniture 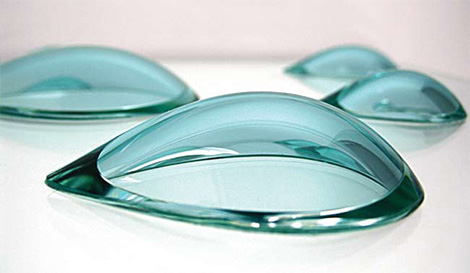 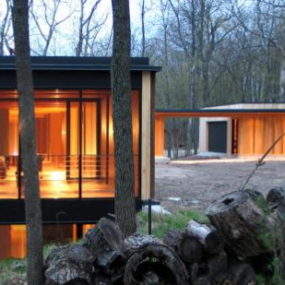 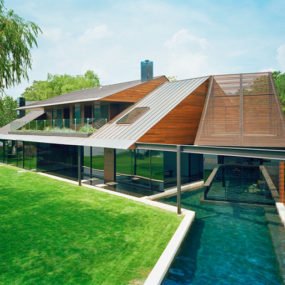 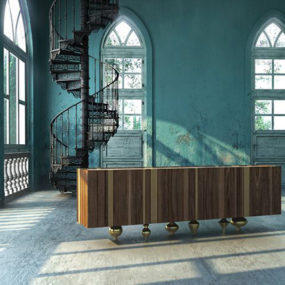 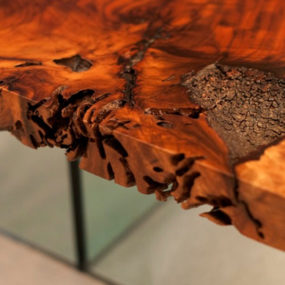 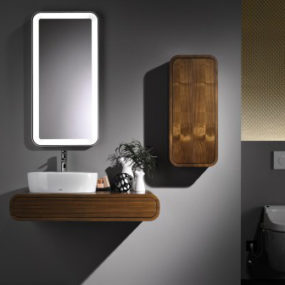 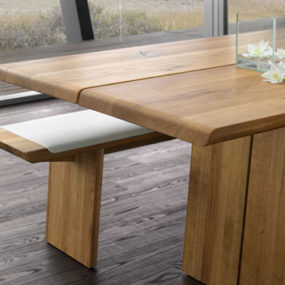