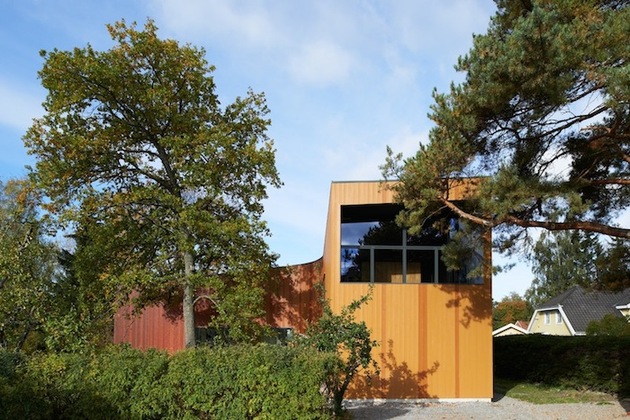 Just outside Stockholm in the town of Sollentuna, this curving residence by Claesson Kovisto Rune stands out among its more traditional neighbors. Its property is awash in greenery, set on a lot with plenty of pre-existing plant life. The tallest side of the home has windows only on the second floor, something not often seen streetside in residential designs. The building itself has two terminal faces at 90-degree opposition to one another, the result of a graceful turn at its middle. It’s most private edge is its lowest, the end of a gradually-sloping roof. Additionally, the home has a unique exterior paint concept, with interwoven strips of orange and red undulating from one end to the other. Every element of its shape, structure, and visual gilding is part of an elegant whole, strikingly contemporary and beautiful in form.
Because of its unusual overall architecture, the Swedish dwelling’s interior is defined by its ceiling and the right-angle progression dominant around it. Public spaces are kept in a single one-and-a-half story wing, while the private rooms are spread out over the two-story second one. Furniture and art pieces are kept minimal and pleasing in the communal areas, while bedrooms and bathrooms play around much more with creative patterns and colors. The orange side of the house is the most personal and whimsical, while the red side is cozy and universally chic. This juxtaposition makes the home great both for hosting and for the daily lives of its residents. 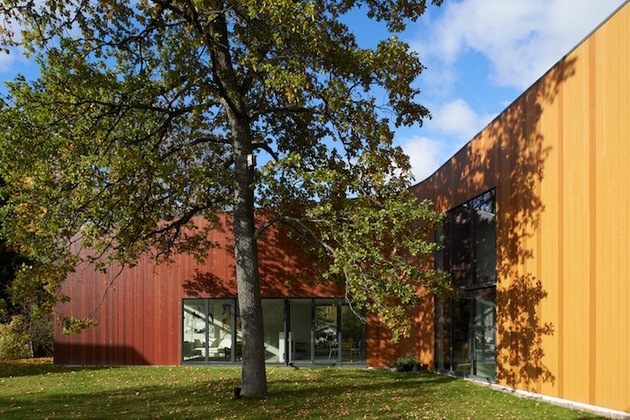 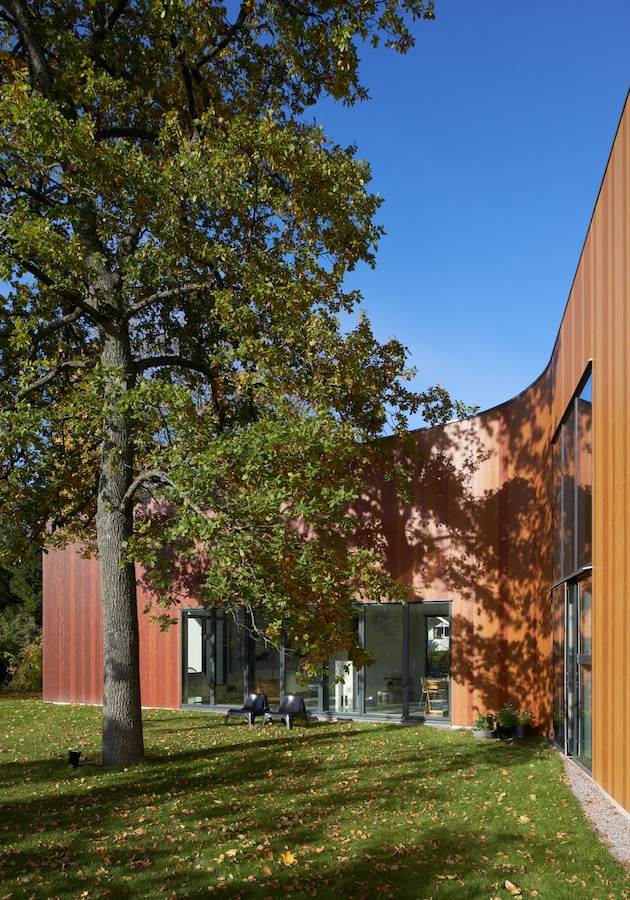 Gracefully curving around a natural focal point in the form of a massive tree, the house pivots at the point between its communal rooms and private chambers. 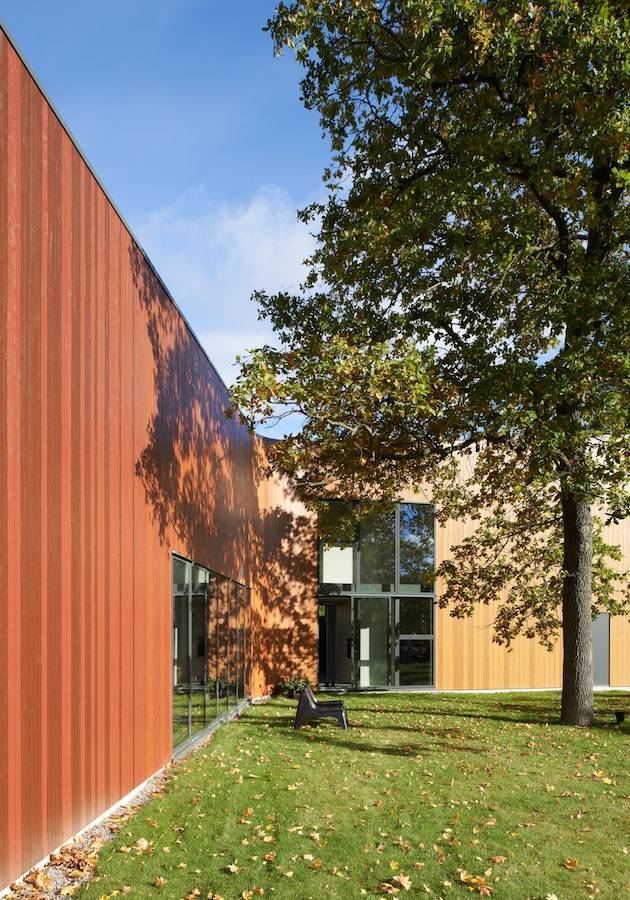 With entrances all over the structure, every piece of lawn is a usable social spot. Because o its trees and central location to the home’s shape, this area inside its curve tends to be a favorite. 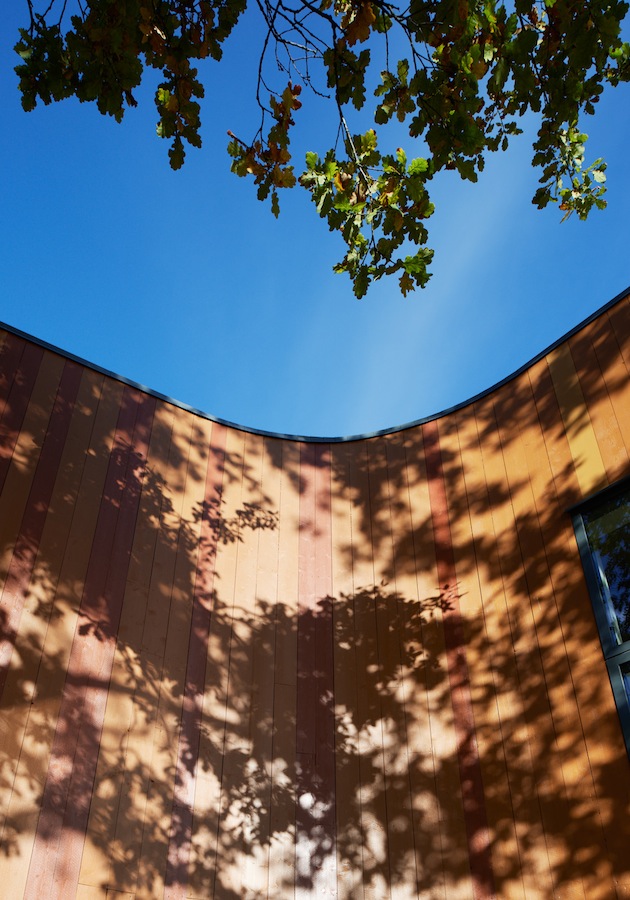 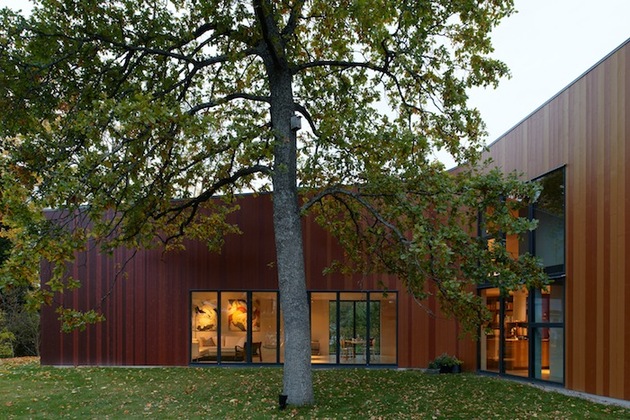 By evening, the contrast in colors grows stronger, creating a dichotomy of autumnal orange and red. The slits of natural hues are spaced seemingly randomly, but fades from bright orange to deep red as the building grows shorter. 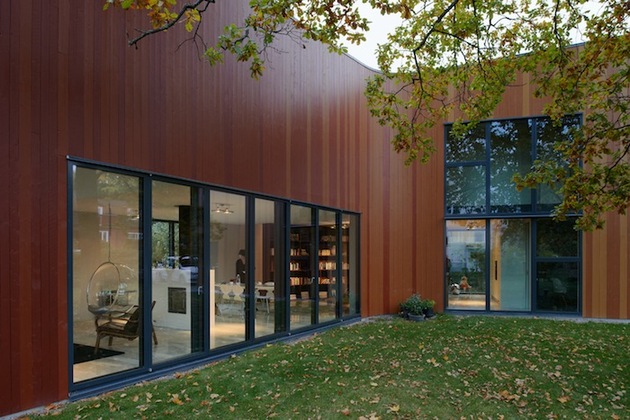 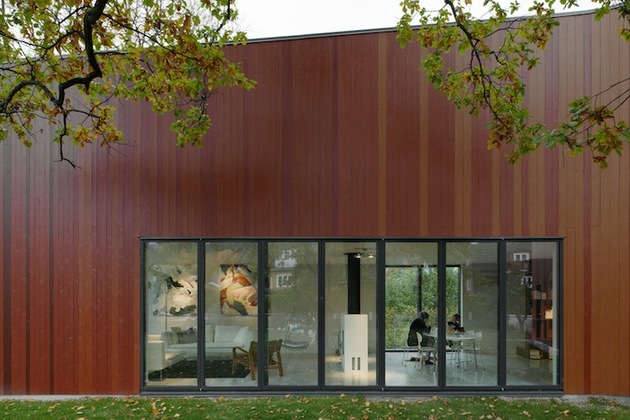 The roof’s full-length slant leads the residence down from a full two-story at one end to a tall single-story at the other. At the home’s turning, an interior staircase ascends to the beginnings of the second floor. 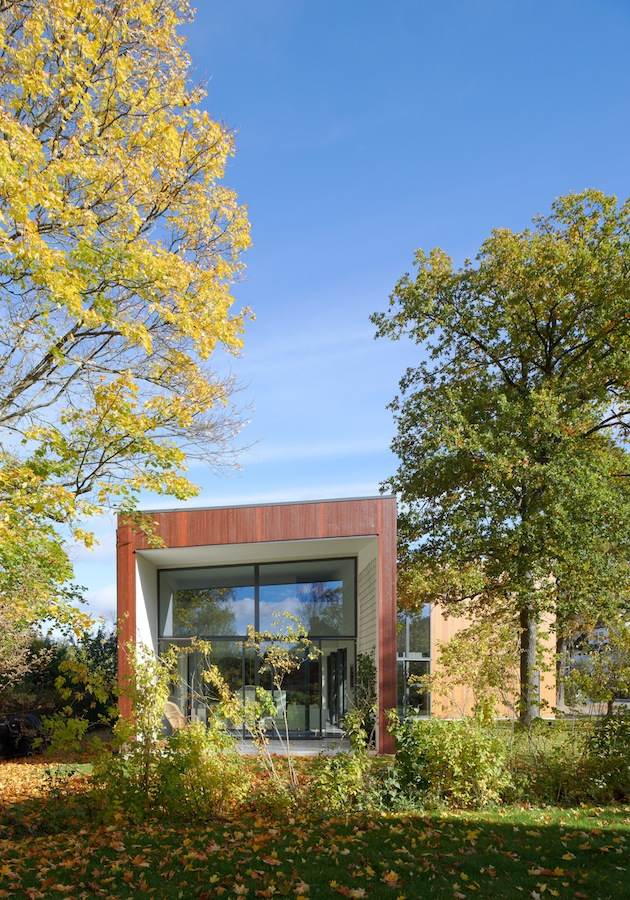 The shortest end of the building terminates with a window set into the walls, providing a final glimpse into the home’s open-concept bottom-floor rooms. 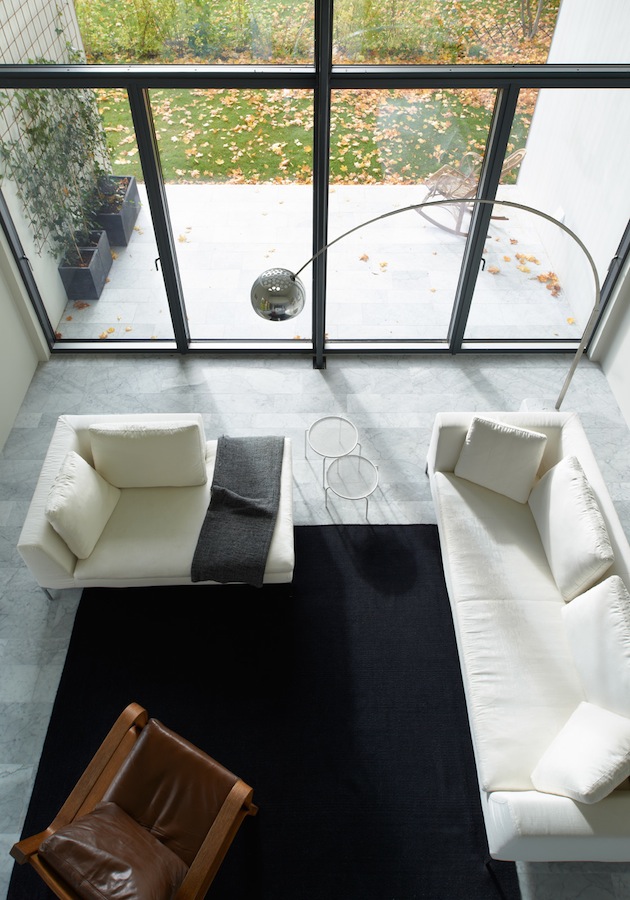 The main living areas of the home are wide and tall, with their ceilings mirroring the gentle and gradual downward slope of the house’s roof. Natural light streams in from its large cut-out windows. 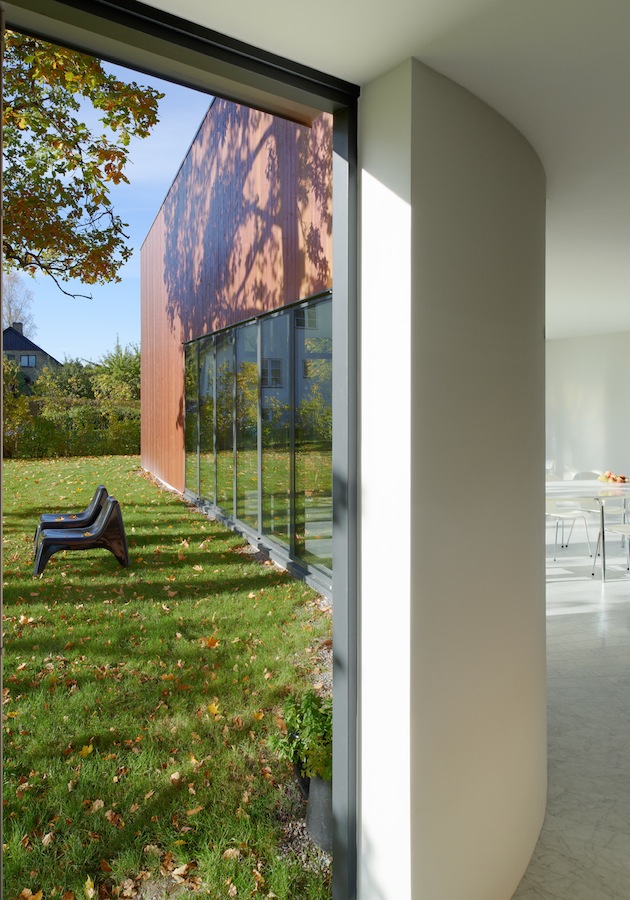 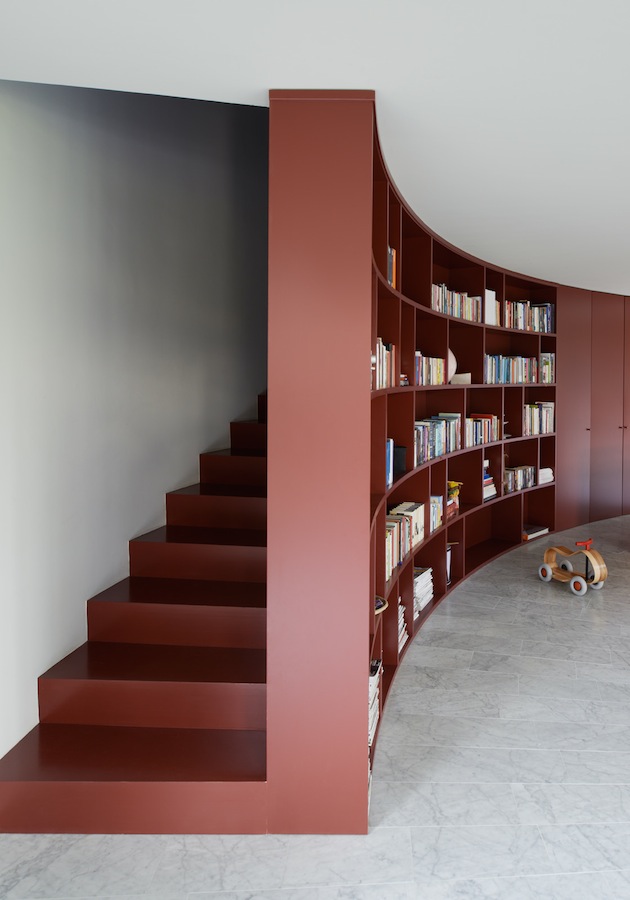 Set on the opposite wall (which curves in the same way as the inner wall does), the staircase to the upper level is framed one one side by a set of shelves holding books and other objects. 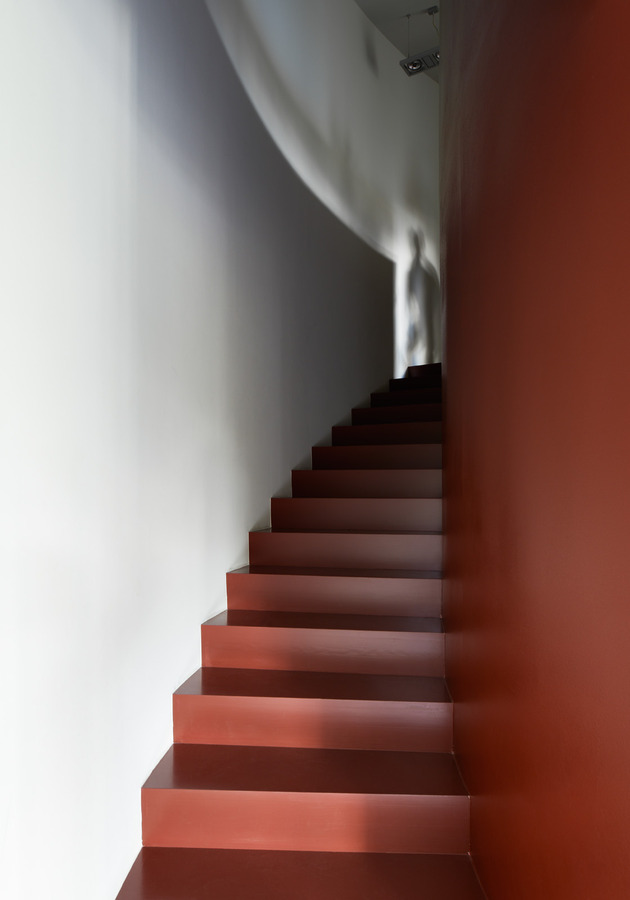 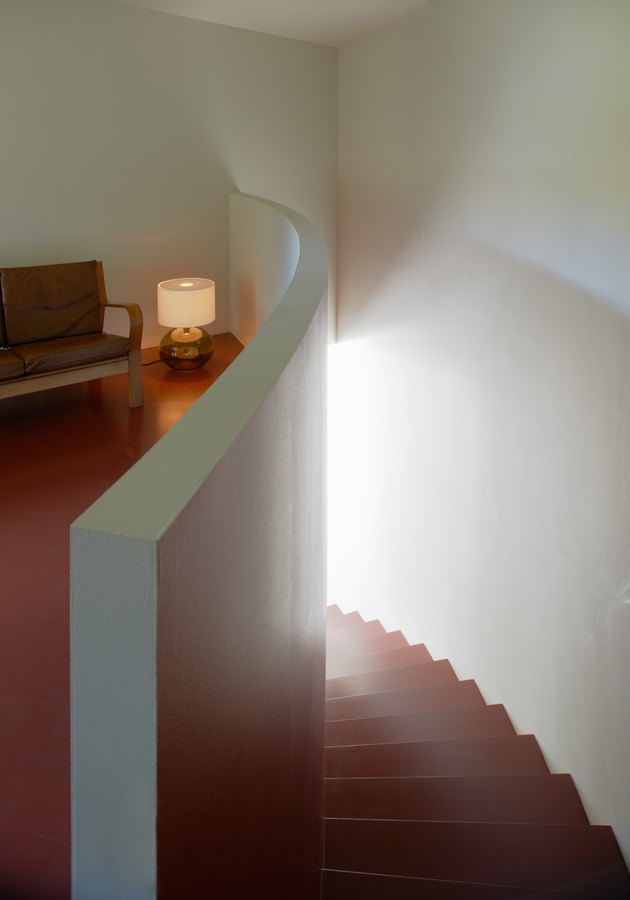 A landing crowns the staircase, with a small sitting area outside the doors leading into the private rooms of the house. Red and white are contrasted gently throughout the transition. 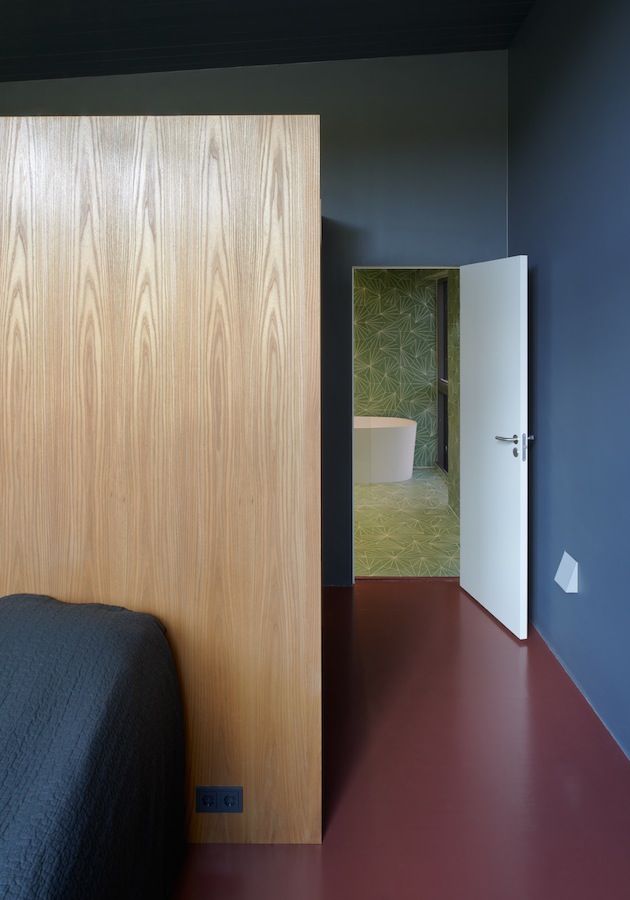 The most creative indoor colors are seen in private spaces, where personalized paint and patterns define sleeping and bathing rooms. 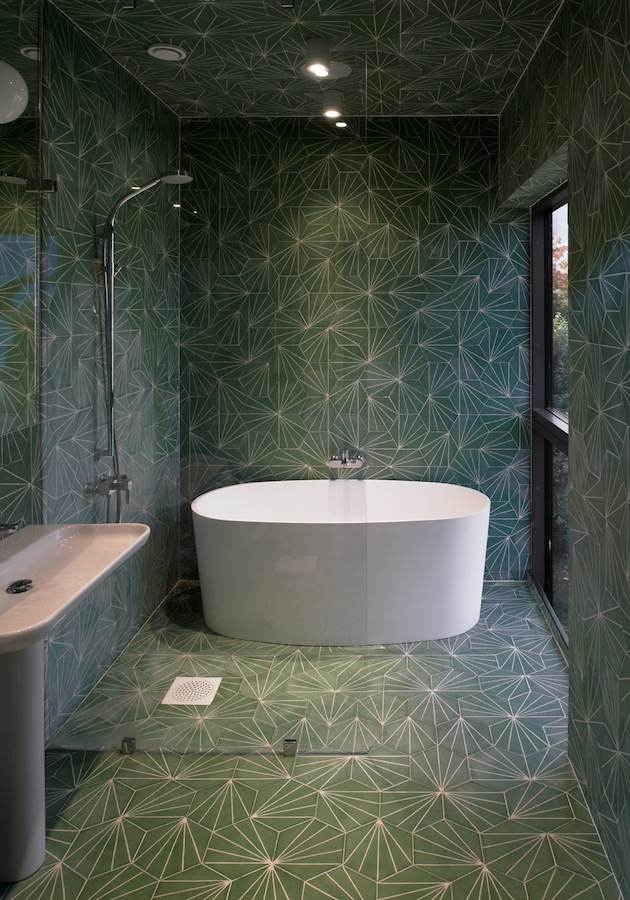 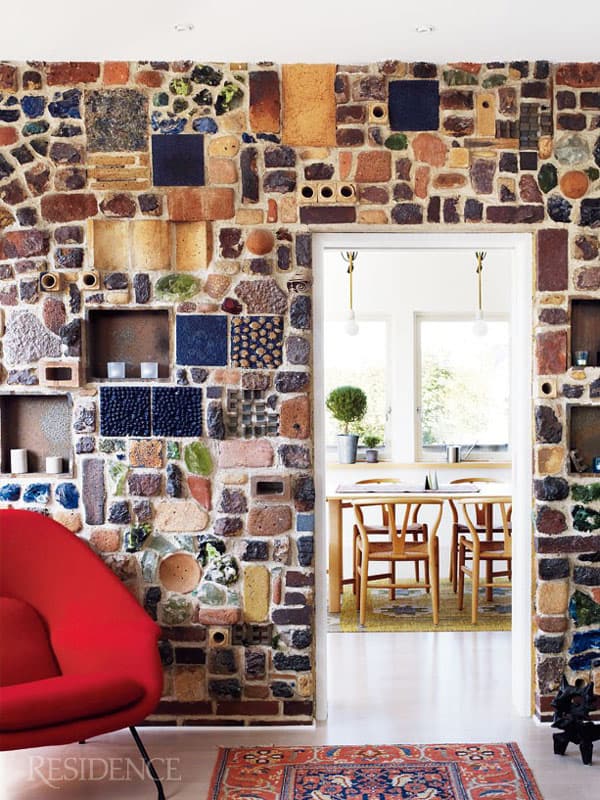 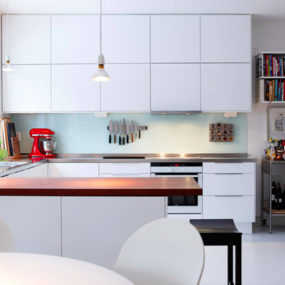 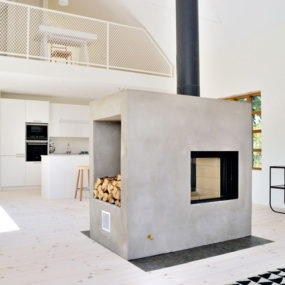 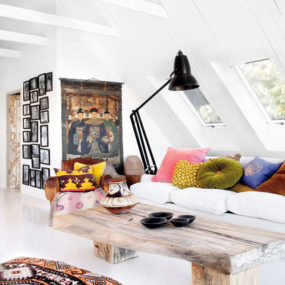 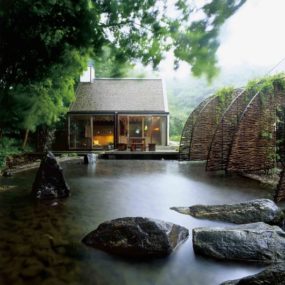 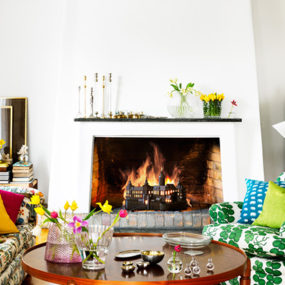