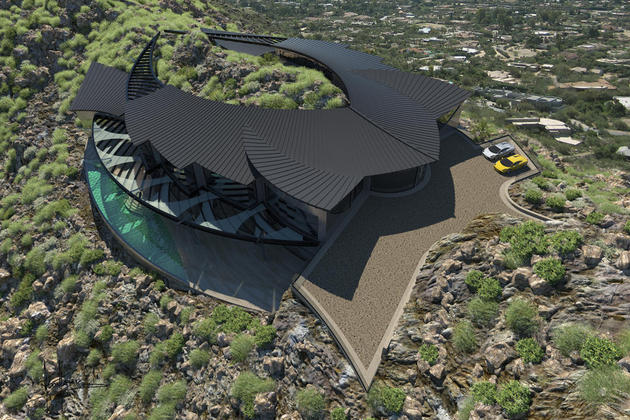 Imagined as the ultramodern main home of a multimillionaire or billionaire, this stunningly strange-looking mansion concept by Tsontakis Architecture is planned for construction crowning Mummy Mountain outside of Phoenix. With no expense spared, the house will feature a private spa, two master bathrooms, and more opulent amenities. It has not one, but two guest homes included in its property, attached by an extension of the main home’s architecture. The house itself has been given the shape of a black manta ray, with graceful yet sharp natural curves and edges. Its 16370 planned square feet make an imposing statement on the surrounding area, crowning the king of the hill with ominous modernity.
Though the house may seem huge and unlimited in design, it actually faces a number of severe architectural challenges. Due to local laws and concern about the preservation of the mountain’s visual integrity, numerous restrictions were placed on the height and scope of the project. This means that Tsontakis was faced with limitations of what should theoretically be a limitless exercise in extreme, ultramodern design. The architect met these challenges head-on with a low and sleek building profile, almost in the vein of an evil, contemporary cousin of Taliesin. The home remains palatial and lavish in all its amenities and spaces, no matter what design restrictions were dealt with in its proposal. It has the feel of a truly unlimited home design, something that its price tag, a cool thirty million dollars, reflects. 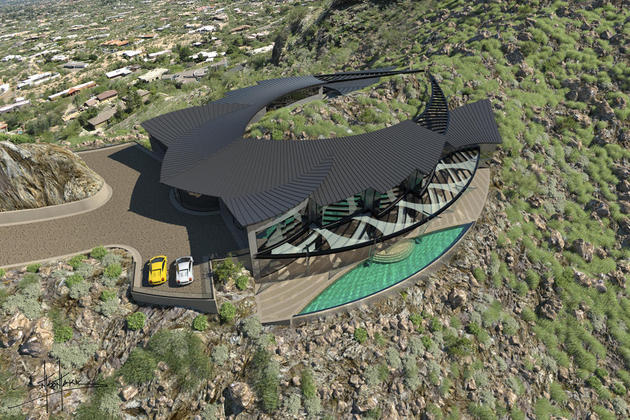 The main home makes up about half the structure of the property, located on the driveway side. It encircles the maintain’s crest halfway, and windows on all sides provide views of both the mountain and the city below. 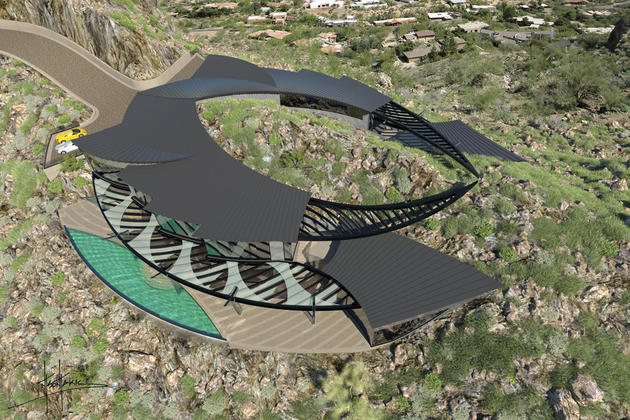 The back of the home will contain, presumably, its two guest homes, the two isolated structures near the ends of the home’s two “tails”. These cottages will be nearly as opulent as the main home, but will provide guests a sense of their own privacy when staying on the property. 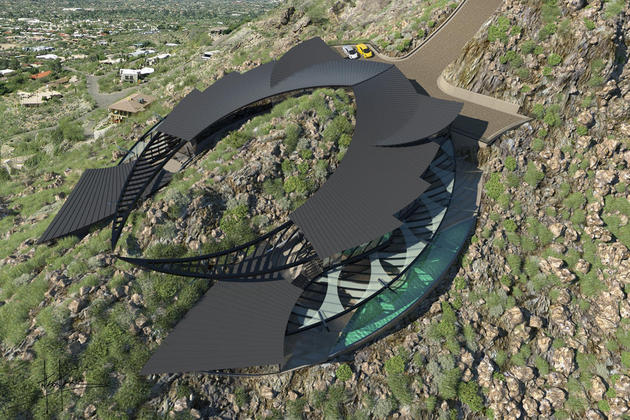 From this angle, the manta ray-inspired shape of the home is most apparent, with its ridged eyes and tapering tail fins. 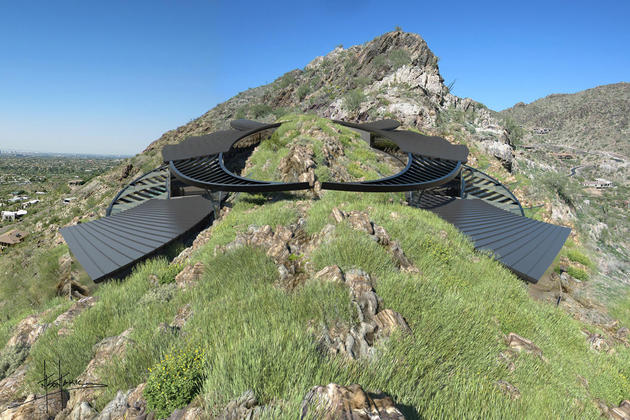 The home’s profile from the rear is actually relatively minimal. Because of local concerns about such a dramatic home destroying the natural beauty of the mountaintop it’s built around, the home has strict height constraints and must conform to a limit of a 20-degree line drawn from the mountain’s crest. 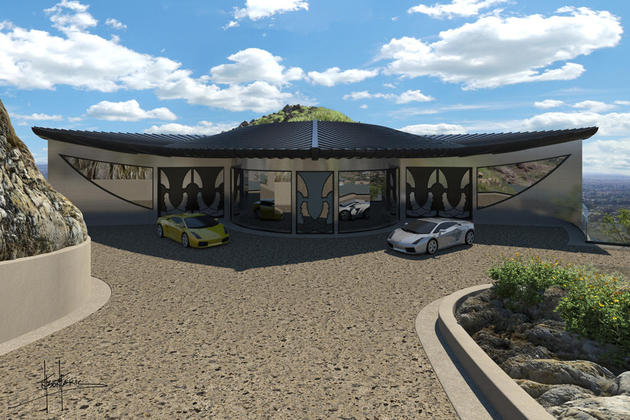 The grand entrance of the home will stem from a sloping driveway, and lead to an opulent main foyer, a ten-car garage, and access to the two isolated guest residences. 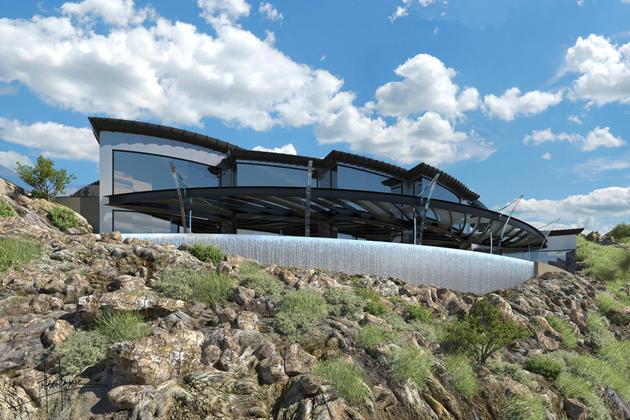 The main home will have symmetrical lower decks on either side, with significant space for hosting large events. Huge windows dominate the sides of the home, forming the majority of its exterior bulk. 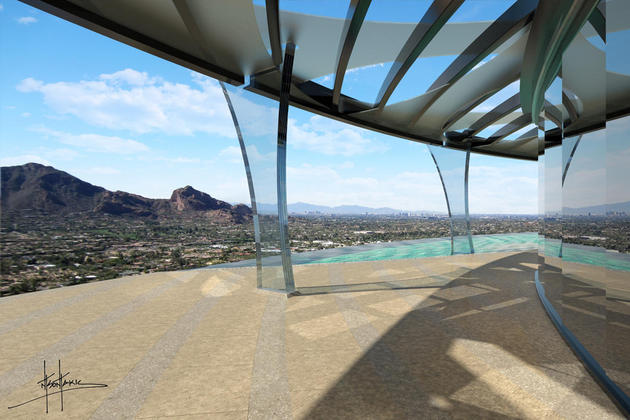 The deck features a large infinity pool, whose water falls down to a system below, creating a visually striking wall of water on the side of the home.
Tsontakis Architecture
via Dezeen 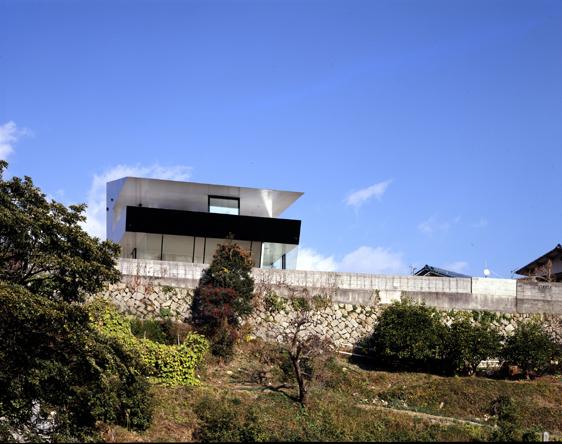 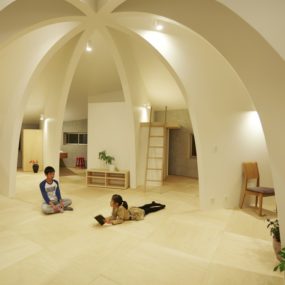