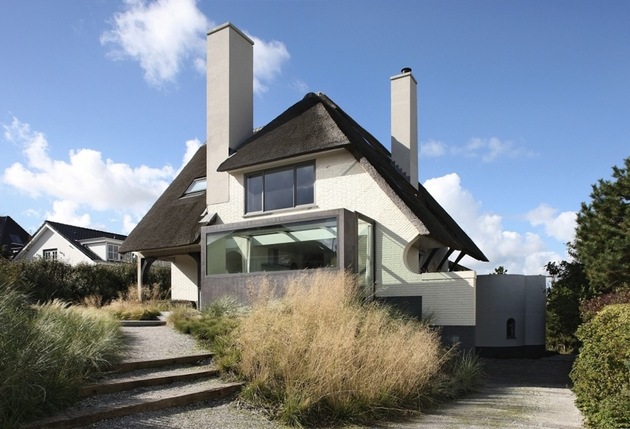 Renovated and redesigned by Rotterdam’s Maxwan Architects, this home on the Dutch seaside originally dates back to 1938. A traditional and artistic house built in regional style, its brick construction and thatched roof had deteriorated over the decades, and was in need of a major overhaul. The current residents decided to do more than just repair it, however, and enlisted Maxwan to completely transform their abode into a comfortable and spacious modern villa. At the same time, they wished to keep the beauty and character of the old house alive, and the resulting dwelling balances those differing desires with elegant style. The white-painted brick and overall structure of the house has remained the same, with new support structures to ensure that it will last another century. However, two new additions and a slew of more subtle contemporary touches have brought the house in line with modern design ethos while integrating it with more traditional influences.
The house benefits from an interior that is nearly a hundred percent new, with sleek fixtures and a bright, airy color scheme. Its two additions, especially, are filled with light from their glass walls and skylights. A modern sculptural railing has been added to the upper portion of its central staircase, putting the crown on the home’s principal transit area. The attic has seen major attention as well, with the renovations taking advantage of its beautifully cut timber and charming triangular shape to create even more usable space. Like on the outside, the interior balances elements that are original to the home (such as the prevalence of wood finishes) with brand new amenities. 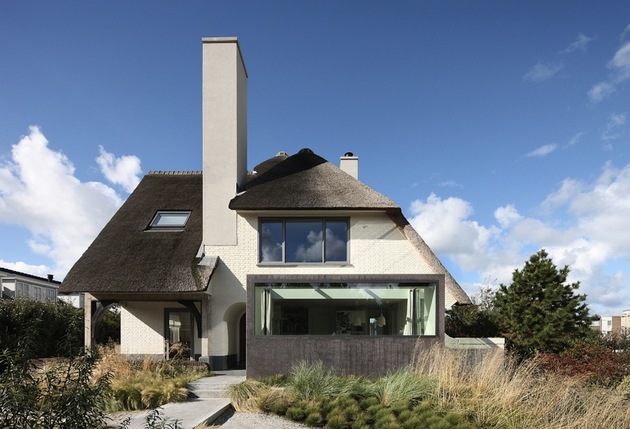 The home started out as a traditional Dutch family house built in the early 20th century, but has been thoroughly made over with two ultramodern additions and a complete interior reinvention. It retains its charm while allowing its owners all the amenities of a modern life. 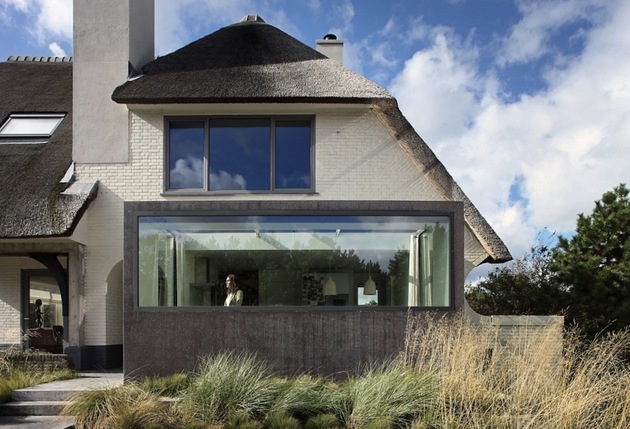 The dwelling’s first addition is a grey concrete-covered kitchen which extends forward from the front of the building, defined by a long uninterrupted window that gives a peek back through the house’s main floor. 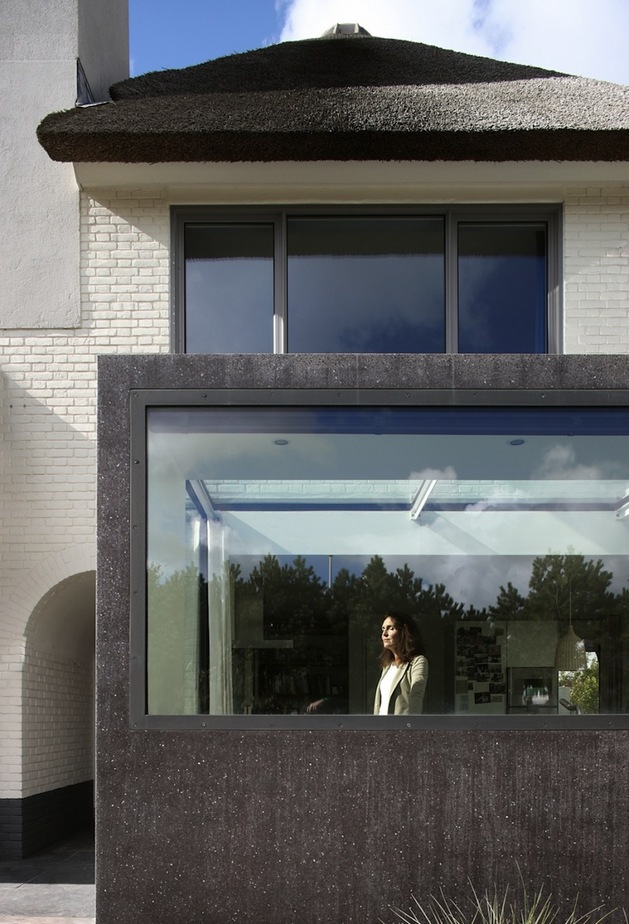 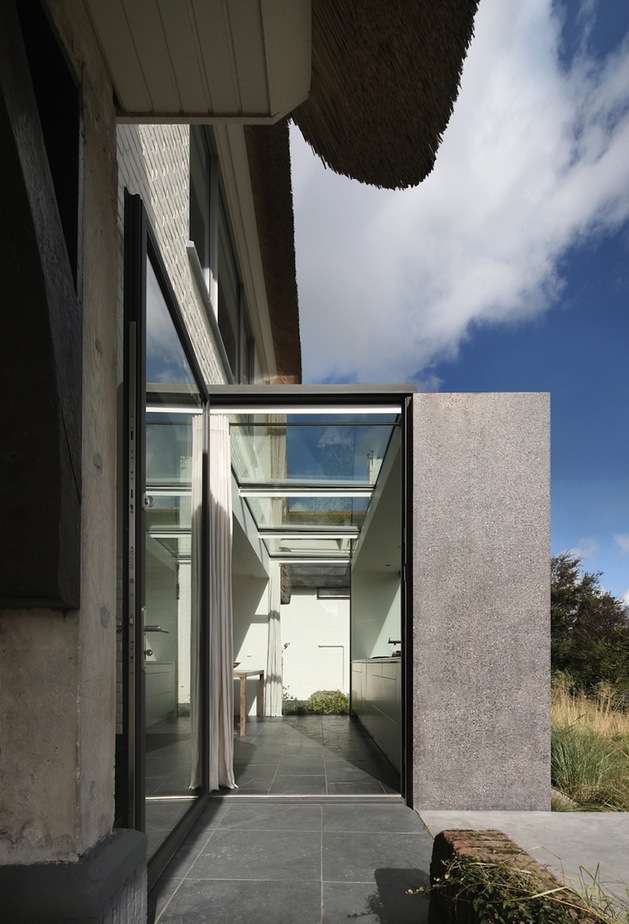 In addition to glass doors and side windows, the kitchen addition also includes a row of skylights extending its entire length. Even on fairly cloudy days, enough light enters through all this glass area for artificial light sources to be unnecessary. 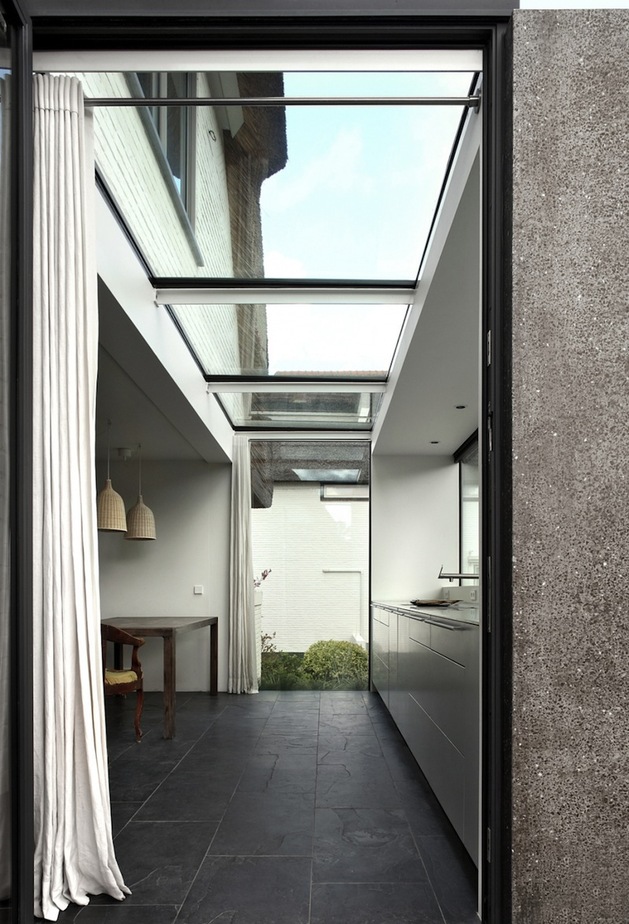 Many of the additions and renovations allow for sightlines all the way through different spaces and out to the property on the other side, integrating every corner of the spacious residence. 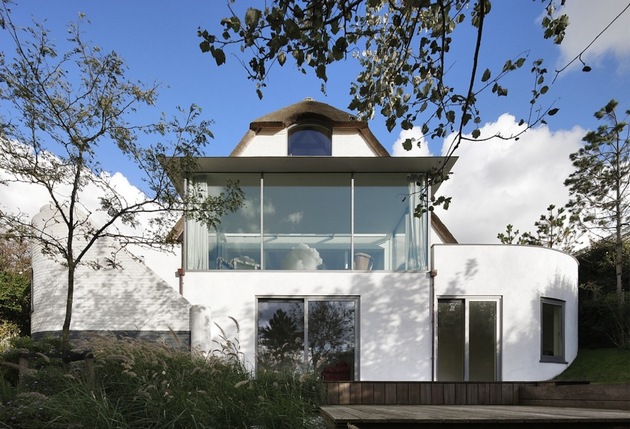 The rear of the Dutch dwelling, taller than the front because of the lot’s downward slope, also has a modern addition of its own. This one is even more glassy and more visually dominant than the kitchen, a squared-off contrast to the curving walls around it. 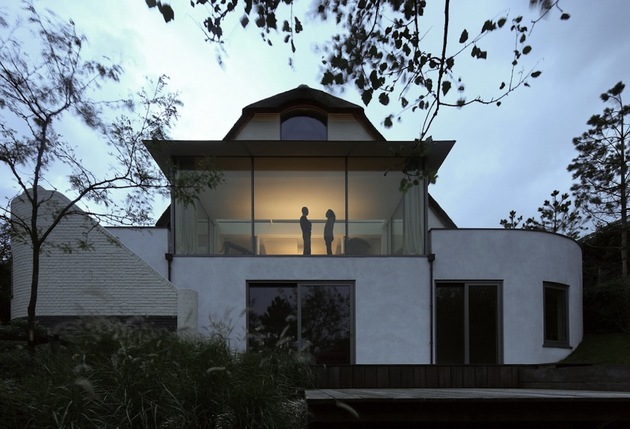 Many of the windows of the house have been made both wider and taller than they once were; all of them have been re-framed with sleek metal borders to accent the current-day changes to the design. 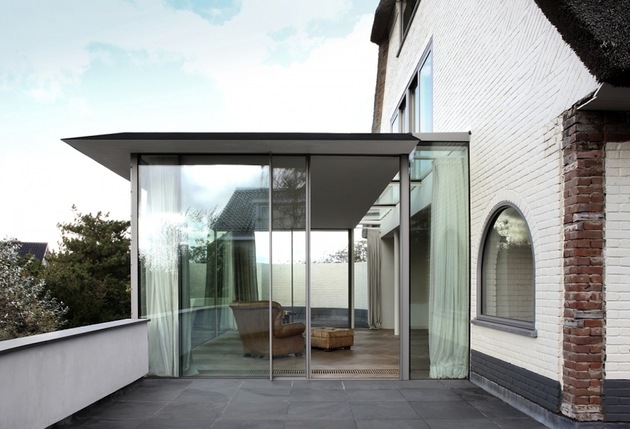 The rear addition takes up space once held by a portion of the rear deck, so its borders and elevation are seamlessly integrated in the transition from indoor to outdoor living space. 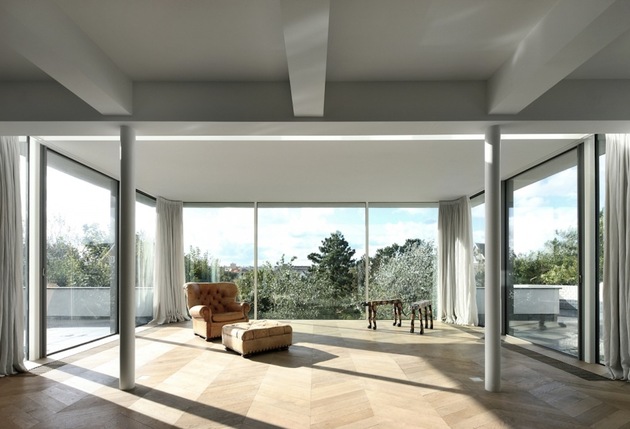 The glass-walled living room on the rear of the building helps to significantly open up the main floor, and white-painted walls complete the visual effect to further expand it in contemporary fashion. 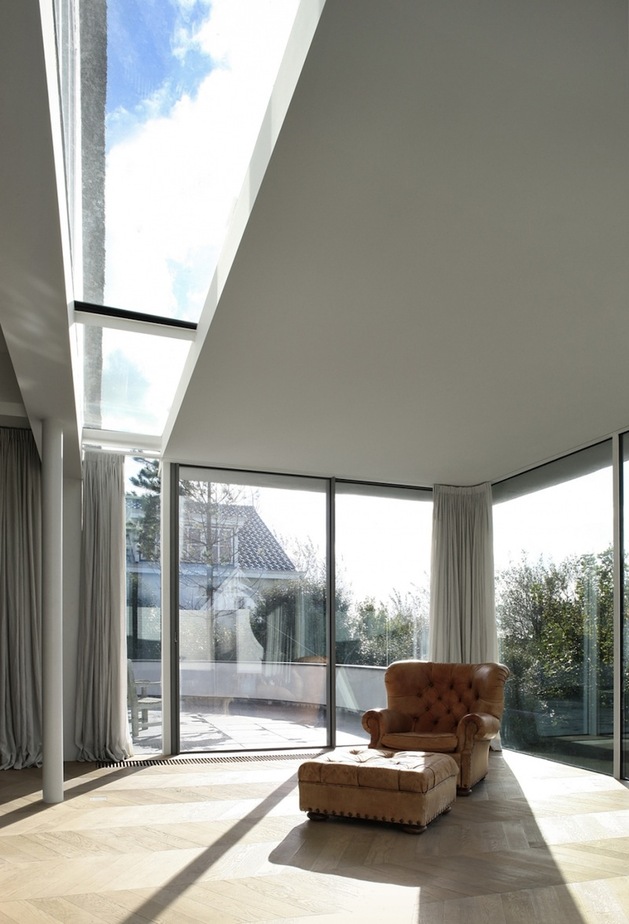 Like in the kitchen, a strip of skylight brings in even more light to the living room. Here that light is even more important due to the significant overhang of the room’s roof. 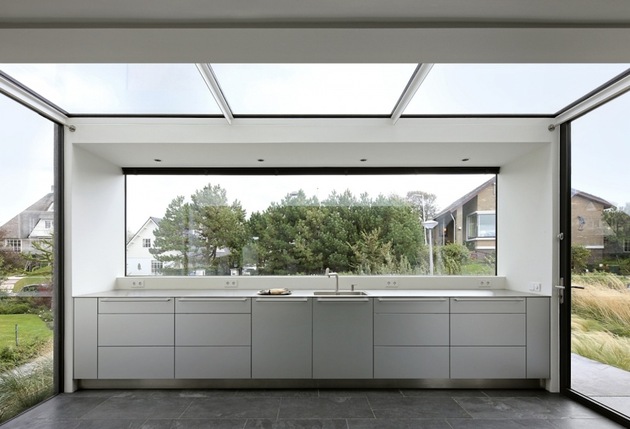 Back at the front, the benefits of large-window construction can truly be seen. The combination of large windows, glass doors, and the skylight strip have integrated the kitchen into the property around it and brought the general environment around it in line with its ultramodern decor. 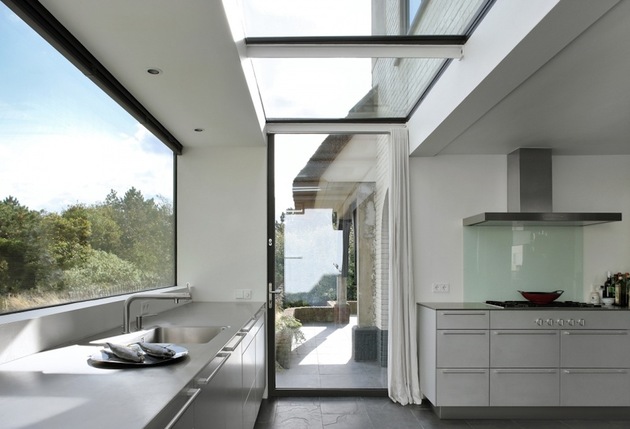 Another advantage of each addition is increased access to porches and decks which previously only had a single entry point. Both new sections of the main floor have an exterior door on either side. 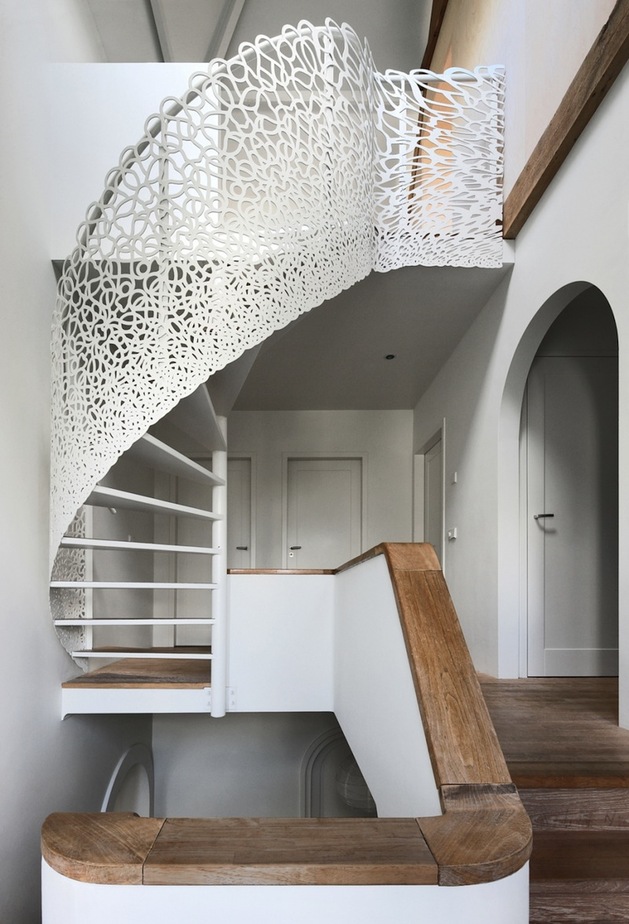 The central passage of the house is this staircase stretching through all three of its floors. The upper portion of the staircase is new, covered in an enticing metal mesh with stretched, organic patterns. 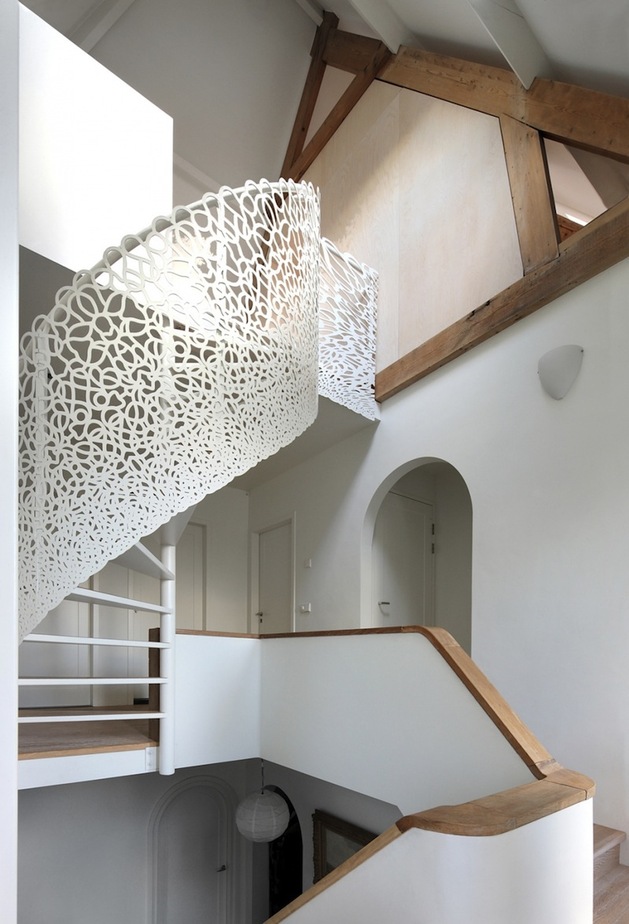 Even the steeply arched top portion of the house has plenty of room for private areas, and is one of the most interesting points of the design due to its A-frame architecture. 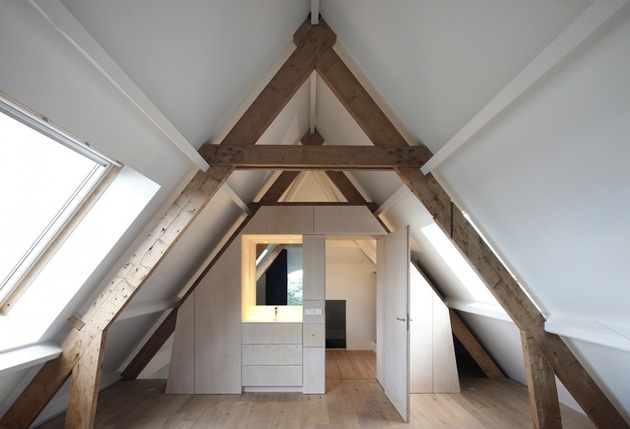 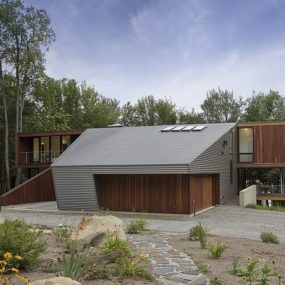 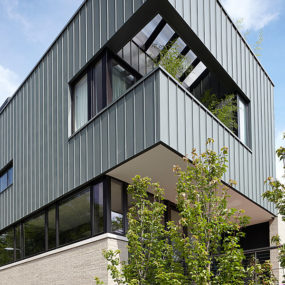 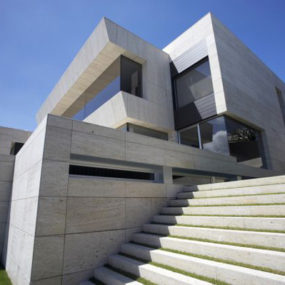 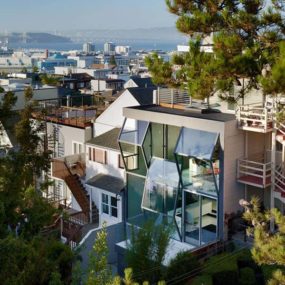 Glass house zigzags its way into the San Francisco landscape

Glass house zigzags its way into the San Francisco landscape