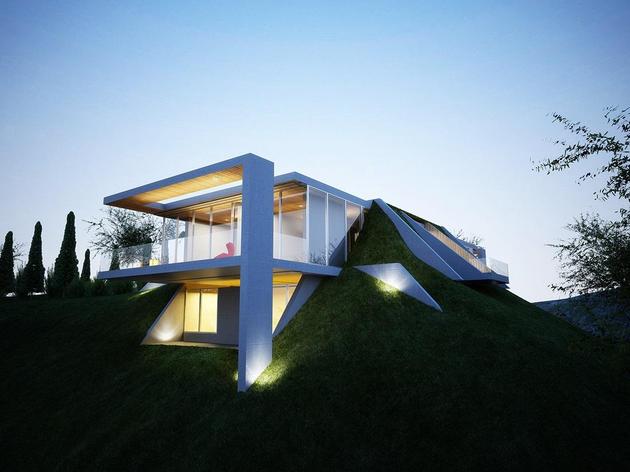 Many homes use the earth for thermal transference but few do it in such an artistically creative manner. Earth House by Molos Group takes every angle and every surface into account from the angle of the grassy slope as it encompasses the facade to the sky as it pierces through voids within the architectural framework. Even the placement of the landscape lighting was purposefully chosen to continue the visual flow from one location to another. 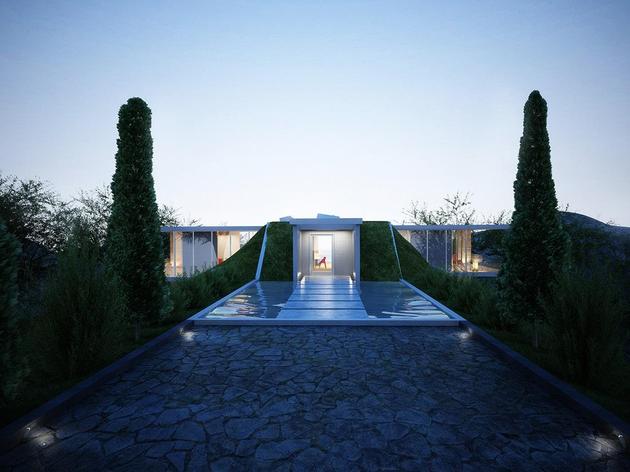 Each and every angle was considered when the architects designed this semi buried home and while certain angles present an asymmetrical abstract image, others offer a more conservative symmetry such as the front facade. The front of the home hides the height of the house, presenting only the top storey flanked on either side by two tall conical evergreens. The image is one of normality until you look closer and realize that the grassy slope has risen on either side of the main entrance to become part of the facade’s detail – like a blanket wrapped around its knees. 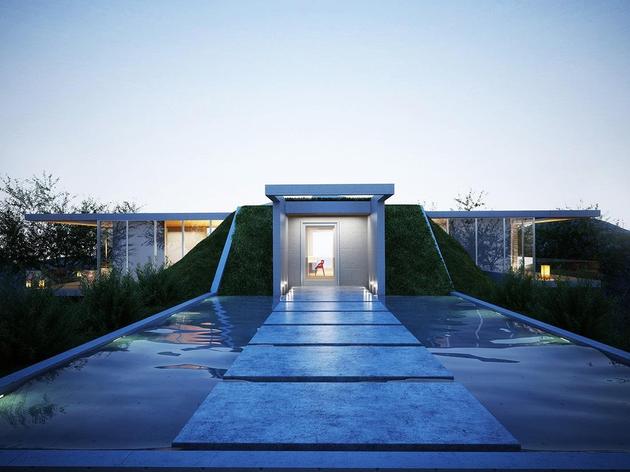 As one approaches the home even more exciting details are revealed. The groutless upcycled broken concrete pavers laid in a random pattern and leading up to the home give way to large concrete slabs surrounded by a water element perfectly aligned with the grassy slope on either side of the entrance. The composition is so artistic its hard to remember that this is a home. 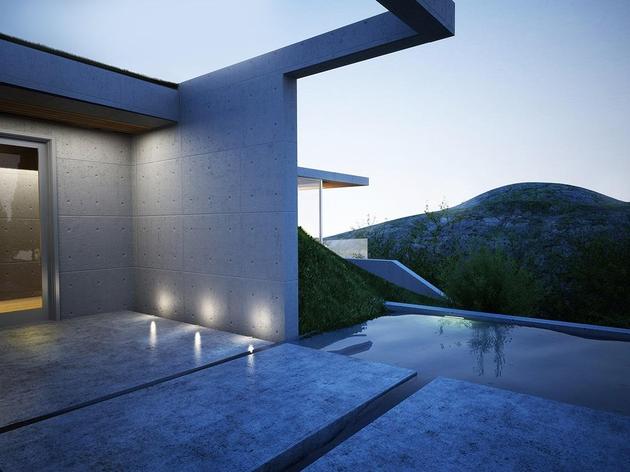 With both water and earth being a strong design element in the entryway, the architects have managed to still give equal importance to “air” by replacing what would normally be a porch overhang with a large void open to the sky above. 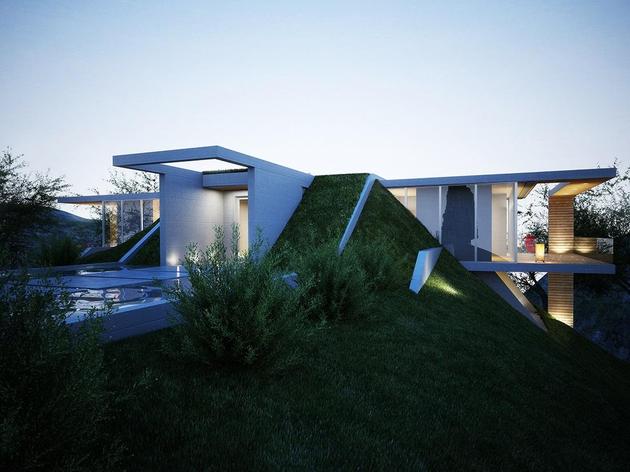 The layering in of voids is a constant used throughout the facade, some exposing the sky above and others filled in with grass. The effects of the geometry make mother nature as important to this installation as the architecture itself. 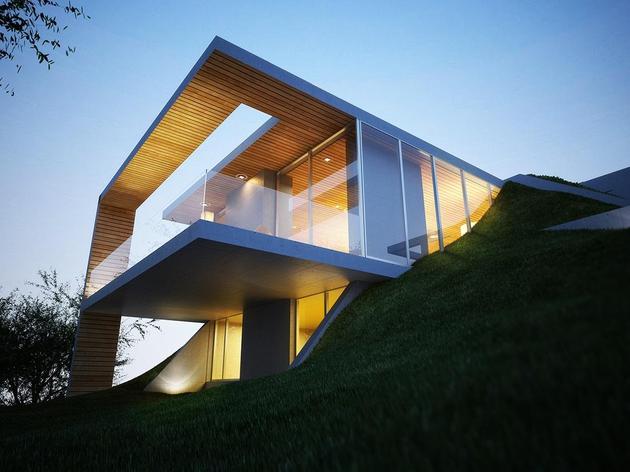 The roof void in the back of Earth House is located directly above an outdoor terrace that acts as a shade covering to the level below. 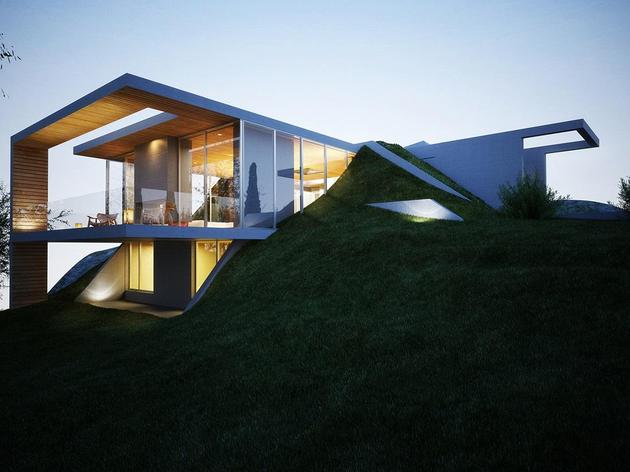 The lower level is the private zone while the upper storey is the social zone and while the bedrooms below are shaded and sheltered, both the indoor and outdoor lounge areas are wrapped in glass to make the most of the views. It is the living area of the house that takes this home from being completely buried to being partly exposed.. 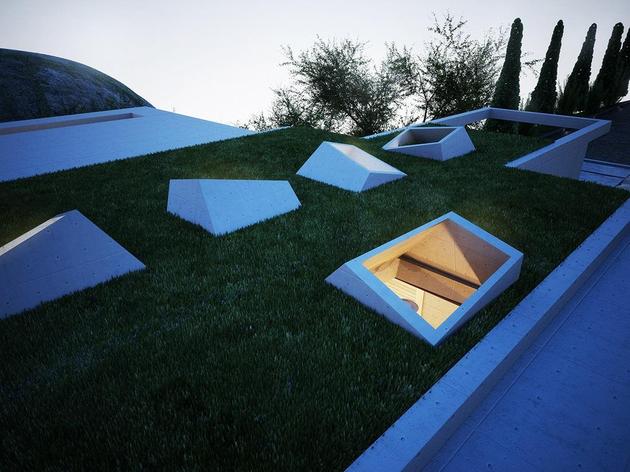 The parts of the social zone that are underground are kept light and bright through a series of skylights poking through the grassy roof. 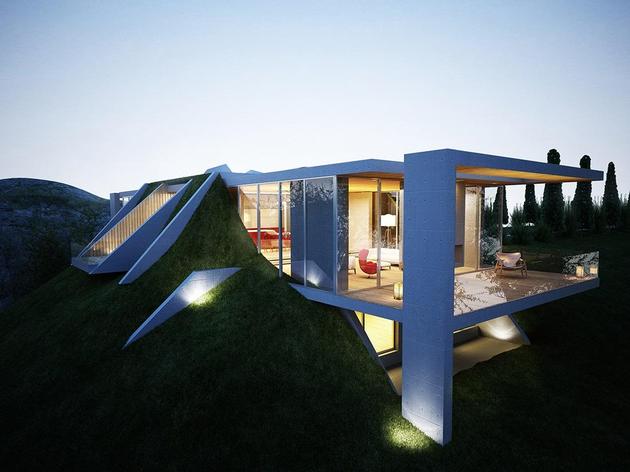 The social zone within has been designed with an open floor plan featuring the living room closest to the terrace and the kitchen furthest back. 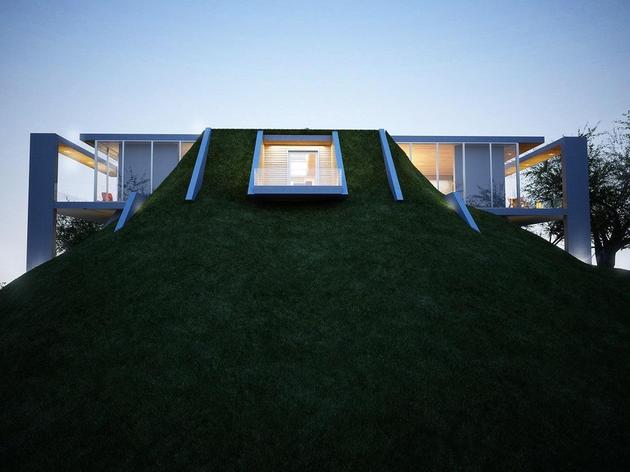 A small balcony off of the dining room punctures the centre of the symmetrical side view on the left and in so doing creates the perfect place for eating el fresco.
Molos Group 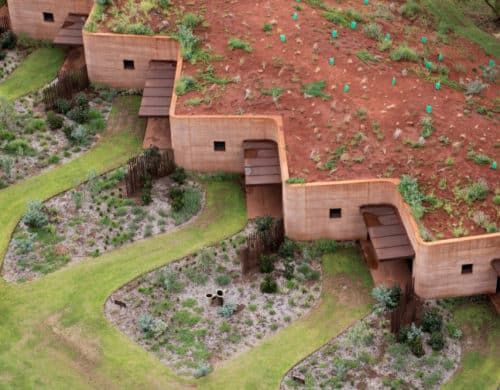 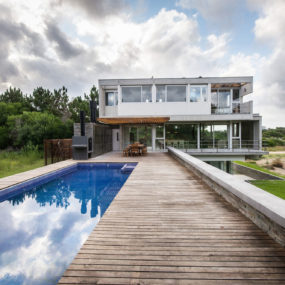 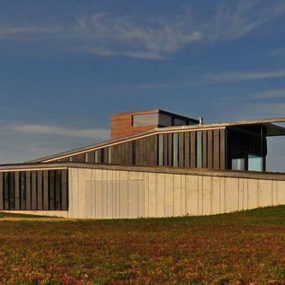 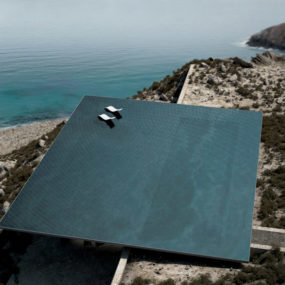