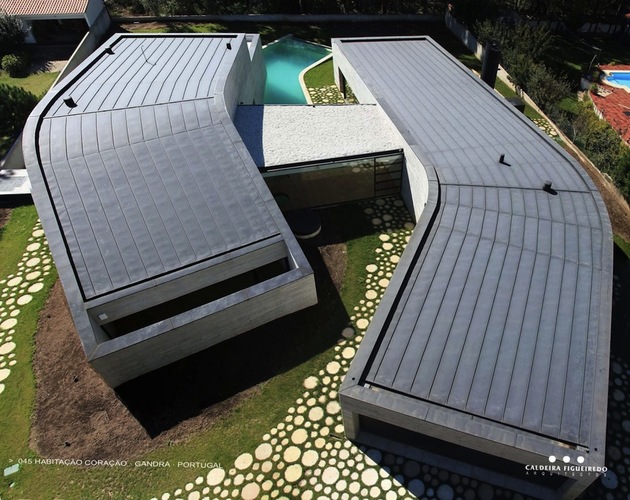 Shaped like an unbalanced set of parentheses on its lawn, this impressive home is laid out over three principal sections: two separate wings and a connecting room between them. Built in Portugal by Caldeira Figueiredo Arquitectos, the personality of the residence balances a bright, social exterior with a dimly-lit, private interior. Each wing is spacious in its own way; one rises two stories tall while the other is sweepingly long down its curved floorplan. Both are finished in a smooth, elegant grey-stained wood that appears almost like concrete from afar, each piece shaped precisely to the curves of the structure. On the inside, various medium-tone dark wood patterns are used in the rooms that sit along the home’s windows, absorbing light and making even the most open spaces comfortable and homey. In rooms with few or no windows, white walls and tall ceilings maximize light, resulting in the brightest rooms being those that have almost no direct natural light sources. 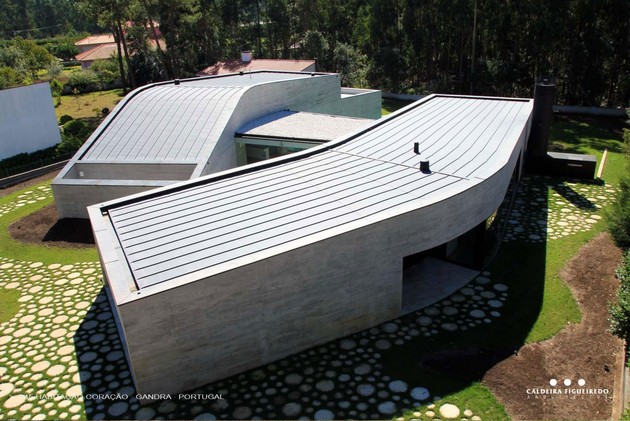 One volume of the house varies in height to create a second story, while the other tapers slightly downward to better define certain end rooms of the first. 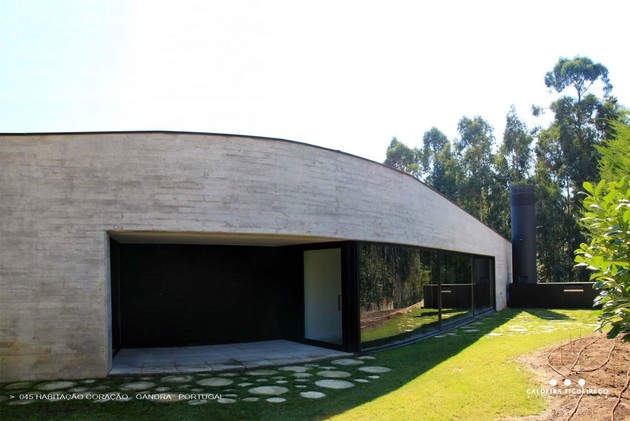 The smaller of the two wings contains a long cutout in its exterior with a spacious covered entryway and a wide window wall. The actual finish of the exterior overall is not concrete, but an innovative curving structure of grey-stained wooden planks. 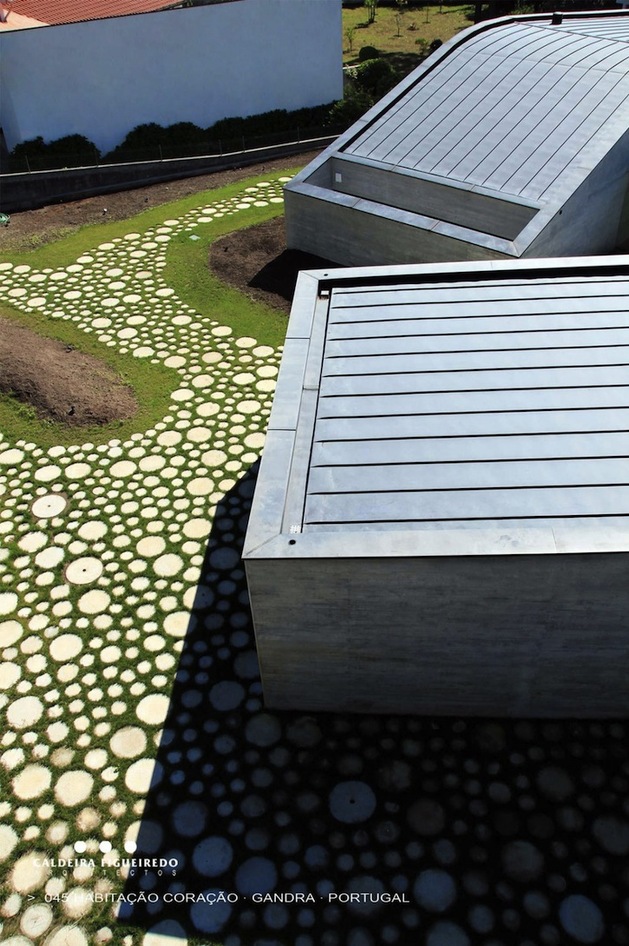 The lawn on one side of the dwelling is dominated by a complex and semi-random arrangement of circular path stones of various sizes, covering one corner of the lot and leading to doorways on three edges of the building. 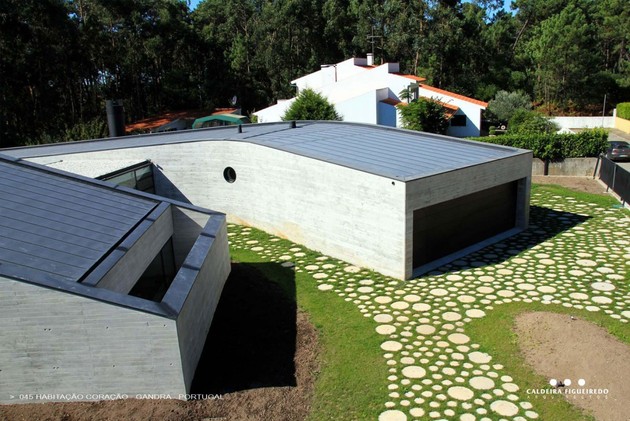 While sunlight isn’t the most important element of the interior’s design, it’s still called for at specific places in a number of different ways. To that end, windows of various sizes, shapes, and orientations are installed, such as the window wall on this end of the structure with another solid wall set a few feet off its edge to bring in just enough light when the sun is highest. 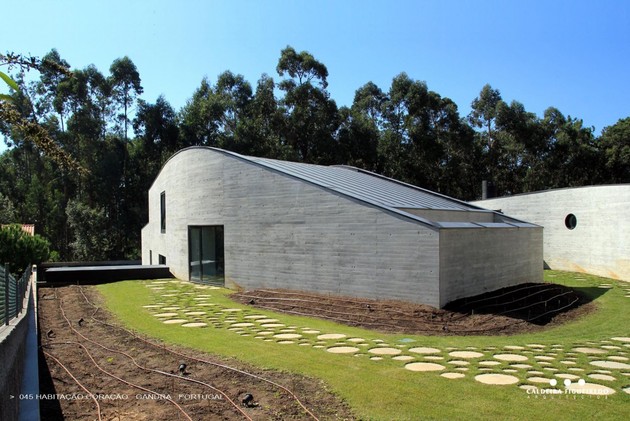 From this angle, the slope of the tallest wing’s roof going towards the rear of the home is most evident. Even then, a slight downward section is added to its last portion to mirror the visual flow of the other wing. 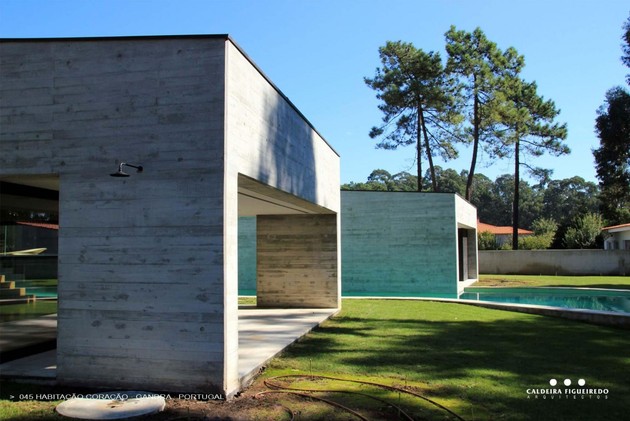 The back of the home is more social that the front, with built-in patio spaces and a well-sculpted in-ground pool. With less open grass area present, the stepping stones from the front are less prevalent. 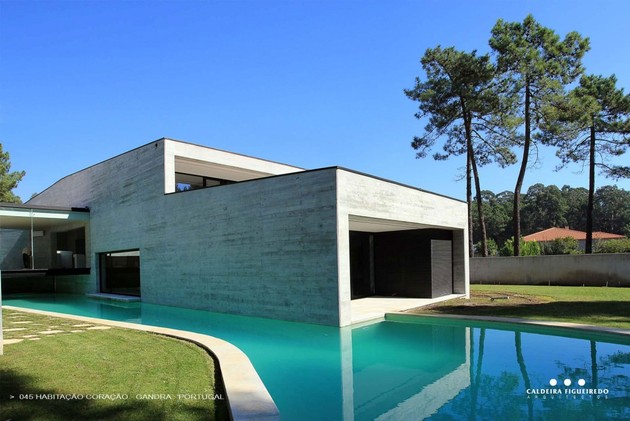 The private spaces of the second story have a long, sleek deck of their own set above most of the rest of the house. A table and set of chairs could make it the perfect romantic dining spot, and the location of the deck allows residents to keep tabs on activity in the yard below. 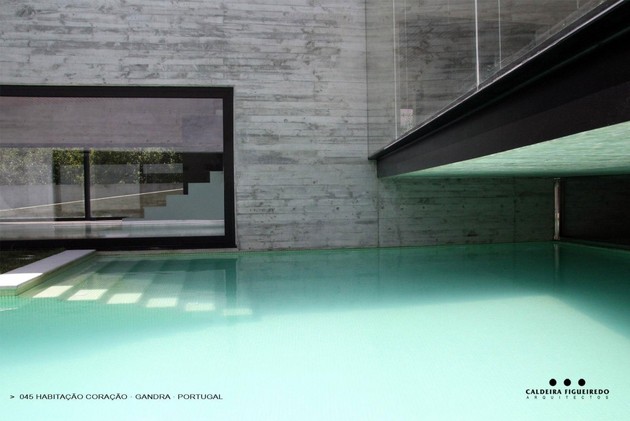 The curving pool is integrated with the house in a couple of interesting ways, an effort much greater than we usually see with outdoor pools. Its steps mirror a set of ascending stairs inside, and the water leads under a suspended living space connecting the structure’s two wings. 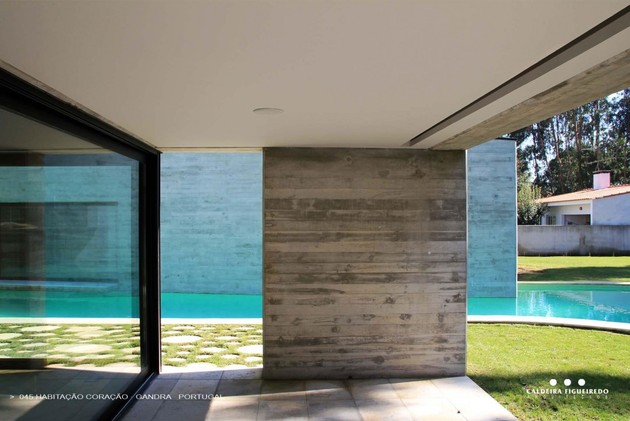 The grey wooden finish of the home is both more intricate and more creative than concrete, retaining that material’s general tone from afar while providing much more captivating details up close. A few steps toward the walls lead to the sight of knots and natural discolorations that would be difficult or impossible to produce in concrete. 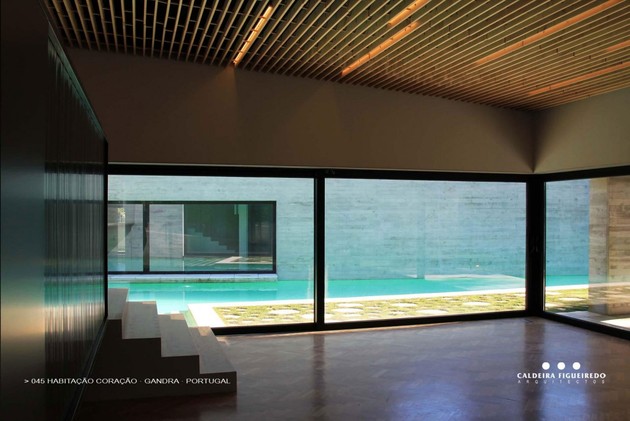 Another departure from the common image of the contemporary home is this dwelling’s interior, which includes many dimly lit spaces. While structurally modern, the near absence of windows near the home’s middle and the darker coloration of its outer rooms creates an intimate, personal atmosphere. 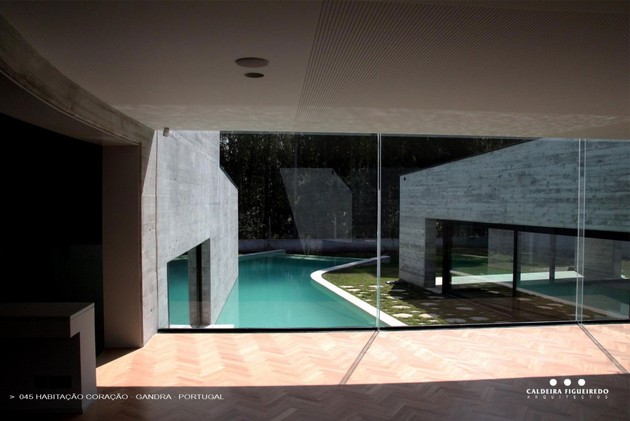 Even the connecting portion of the residence, which includes a higher window concentration than almost anywhere else in the building, uses shadows to instill a sense of privacy and solidity. 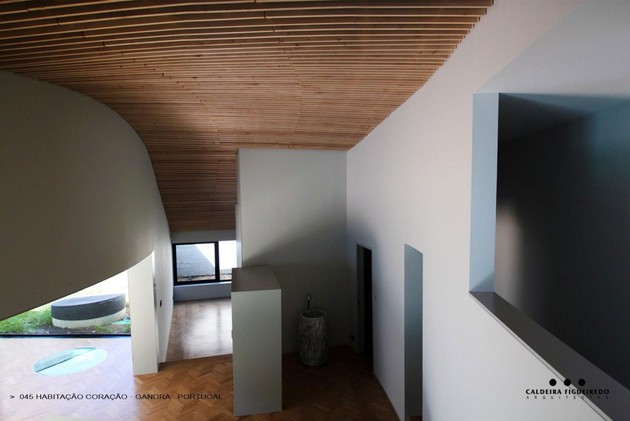 Demonstrating just how much a difference a few design changes can make, the brightest section of the home is somehow nearly absent of window space. Here, two-story ceilings and a bright white color scheme enhance the area and maximize the light that does enter instead of absorbing it. 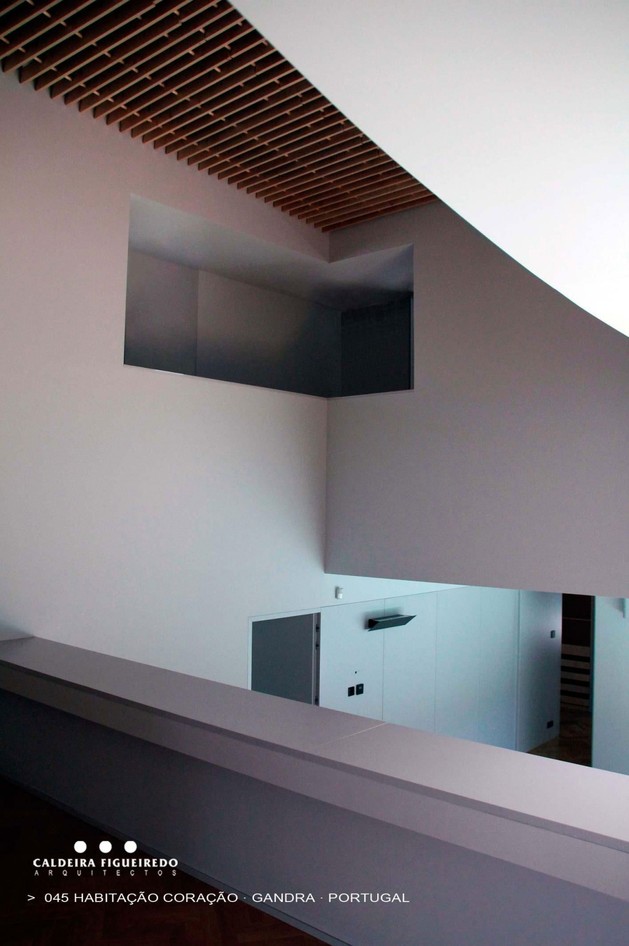 Parts of the interior are a collision of traditionally squared-off room definitions and the curvaceous overall shape of the house. Wall cutouts provide display space and passageways for light entering downstairs. The wood-slat ceiling has a black backing, reminiscent of the abode’s darker rooms. 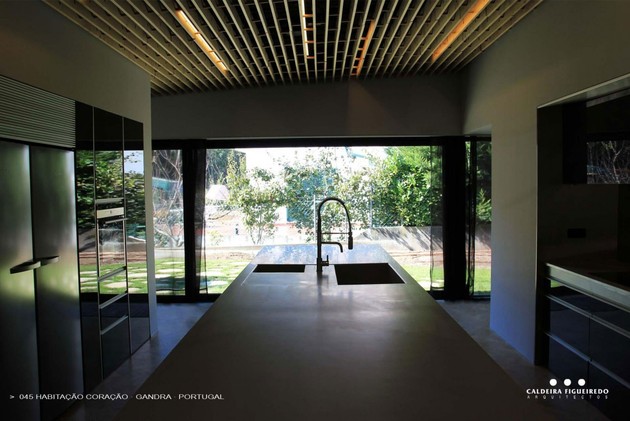 Despite a large window along one edge, the kitchen is one of the darkest rooms of the entire house. The bulb strips in the ceiling glow a deep, mood-setting yellow and reflections of the yard are cast over glossy, contemporary appliances and surfaces.
Caldeira Figueiredo Arquitectos 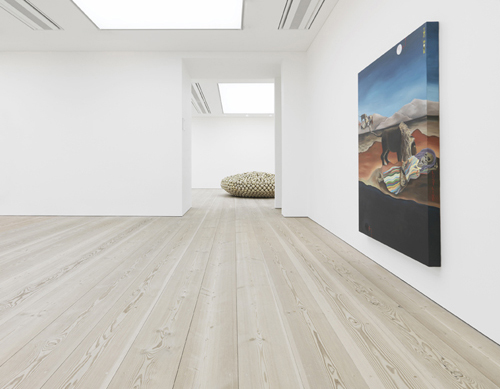 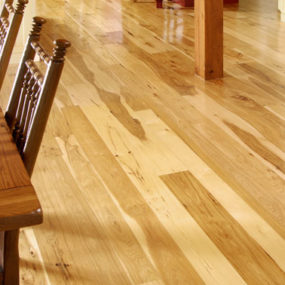 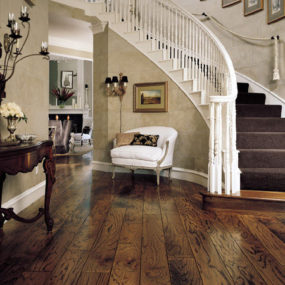 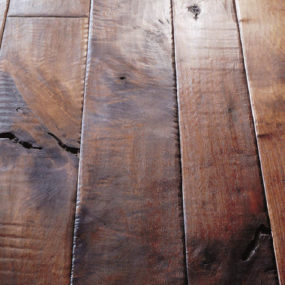 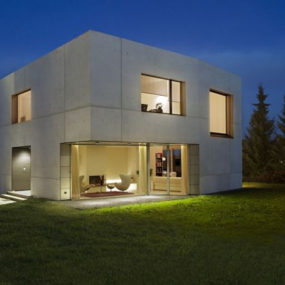 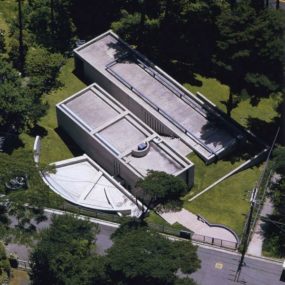