Zen Master Suite With Outdoor Views Either End by Minosa 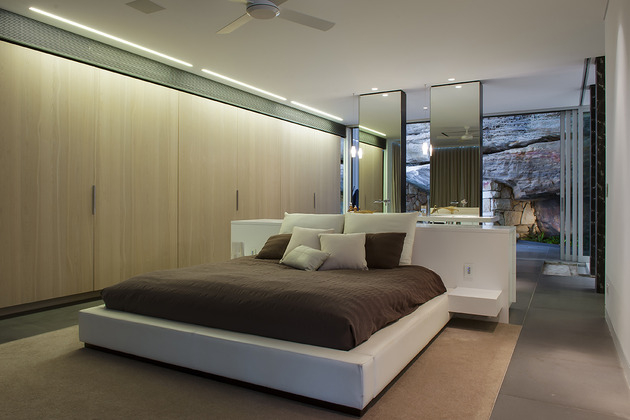 Darren Gennner of Minosa Design was given a brief by his clients to create a private resort style ensuite reflective of the cliff face directly behind their home while at the same time taking advantage of the panoramic landscaping of the beach beyond. The home is cantilevered over a hill in the suburb of Dover Heights, East Sydney and presents a 270-degree view of the Bondi Beach towards North Sydney. With two levels above ground and four below, it embraces its surroundings while at the same time utilizing cutting edge design and finishes of concrete, sandstone, basalt and vast window glazings. The same design aesthetic was a must for the new ensuite. When Darren first observed the site he was inspired to suggest a design that incorporated the Master Suite as one large space with views to the beach and cliff apparent from all locations within and the final design features the headboard as the division between the bathroom and bedroom zones. 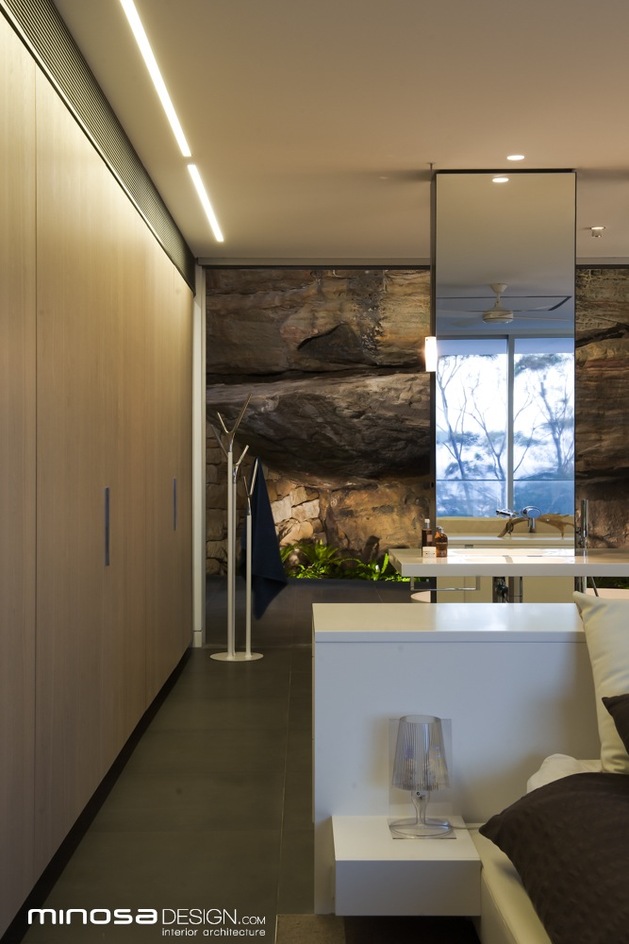 The headboard is low in profile to allow the view lines back and forth to be as intact as possible. Here, views of the cliff are fully exposed through the retractable window wall and views of the beach are reflected through the mirrored columns. The wardrobes flanking one side of the suite are bathed in light from the 7.2m long LED diffused light that runs its length. Pot lights in the ceiling flood task locations and bedside lamps grace the night tables. All the lighting can be operated individually though a smart home automation system. 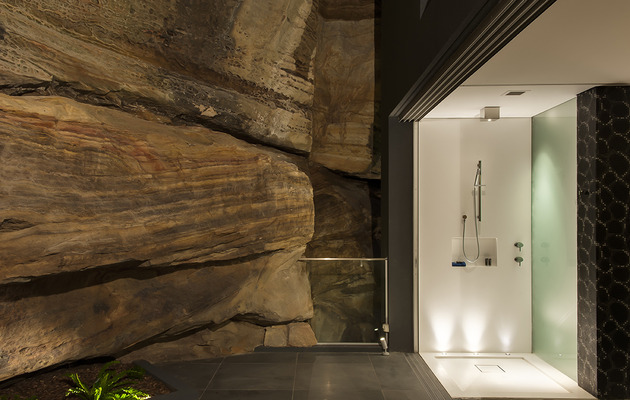 The cliff is in close proximity to the home and Darren took advantage of this by designing an outdoor terrace that seems to meld into the rock face. Darren chose to use the same large format basalt tiles, which run throughout the rest of the home on the terrace as well as the Master Suite. 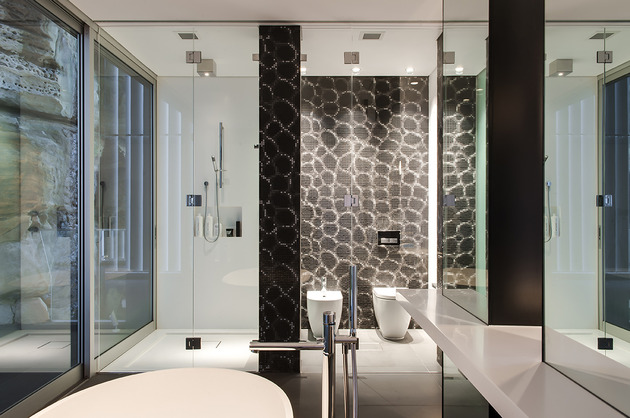 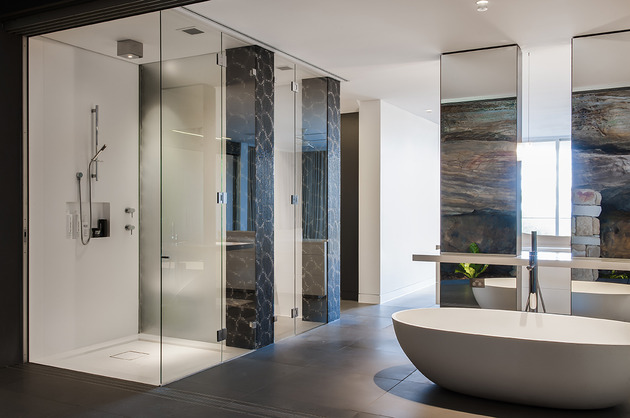 One triple pane sliding glass door offers access to either the shower or the toilet zone and both spaces have their ventilation and extraction system to regulate the air quality. The shower, toilet and bidet are located on the only wall allocated to the bathroom area and just in front of them centrally located is a large freestanding soaker tub. 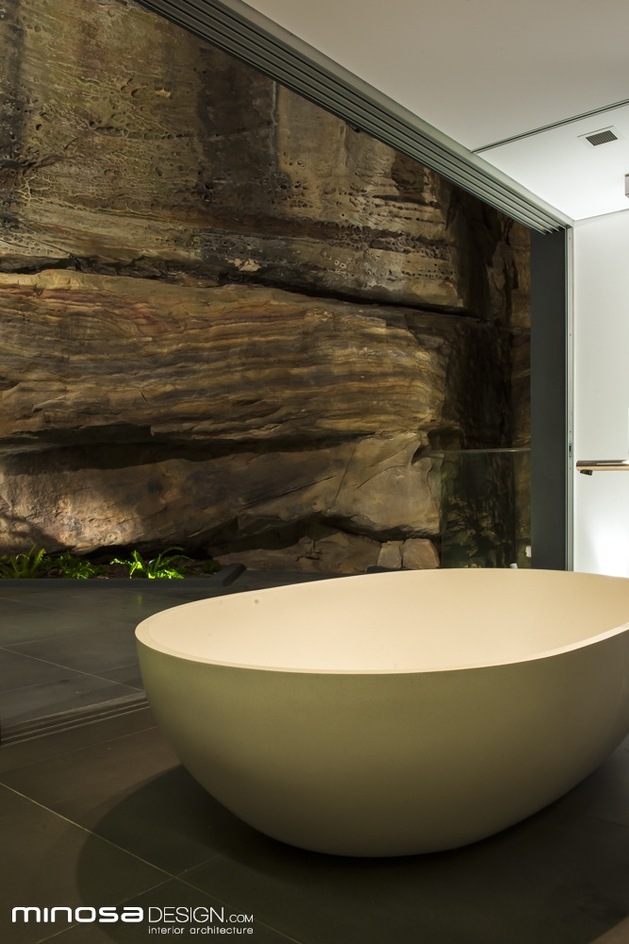 The oversized soaker tub is located to take full advantage of the Cliffside terrace. The terrace can be opened up or closed off to the suite via custom bifold doors that tuck neatly out of the way when open. 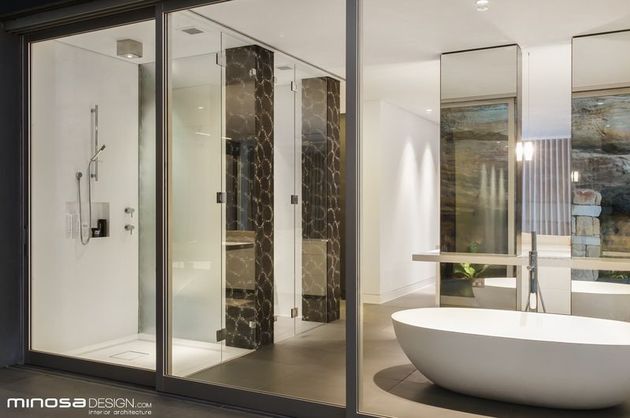 Two rectangular mirror clad columns rise up just past the tub, reflecting the angular rock face. The hard edges of the cliff juxtaposed against the crocodile print and the curvilinear lines of the tub create a textural story against the otherwise all white Corian backdrop. 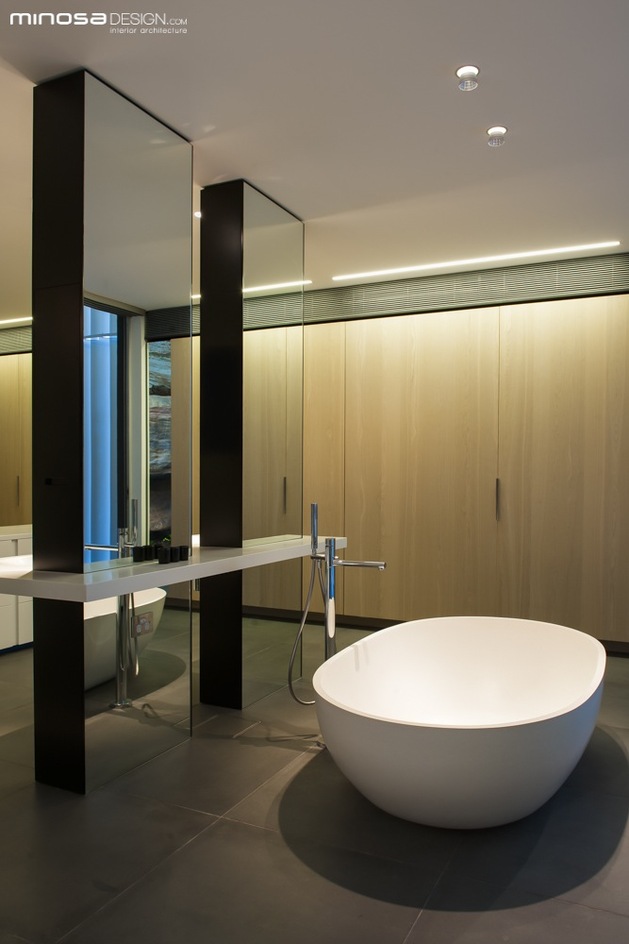 The mirrored columns support a Corian counter that holds his and her grooming stations tub side. The floor standing tub faucet is centrally located between the two columns creating a division between the two stations. 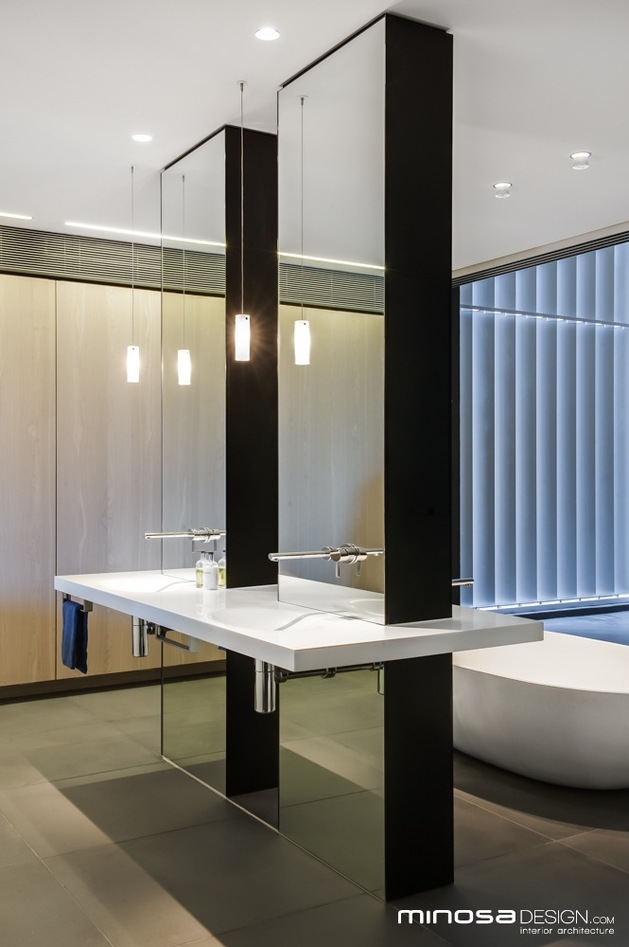 The Corian counter wraps around the mirrored columns, transforming into his and her vanities with mirror mounted faucets. Just below the counter, small towel racks are located for easy access and in front of each station a pendant is suspended from the ceiling for task lighting. The columns themselves offer functionality beyond the view reflections. The plumbing for both sinks is contained within the lower section of the columns while the upper section hides lightweight pull out storage units that are accessed from the sides. 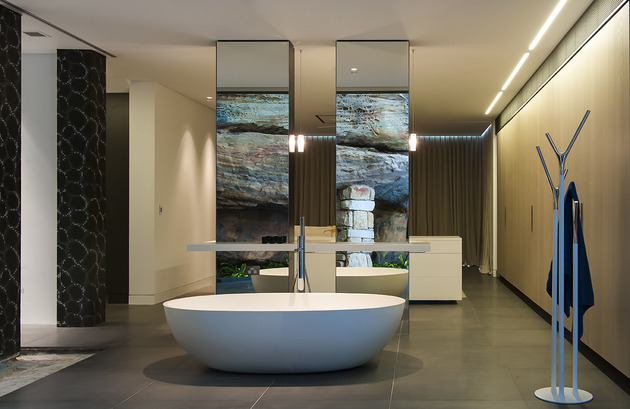 Tucked in behind the mirrored columns, the tub is offered a sense of privacy from both the vanity station and the bedroom zone beyond. 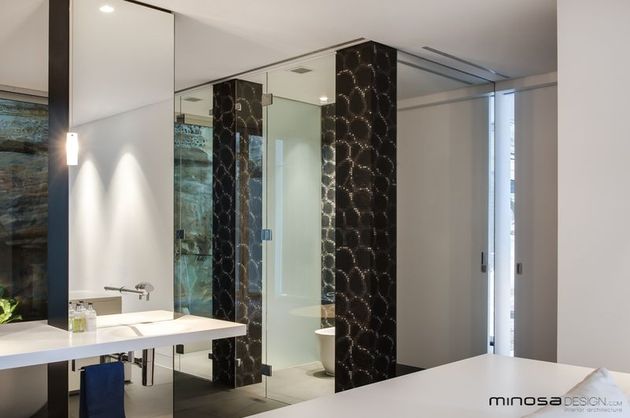 The vanity area is defined by the mirrored columns on one side and the headboard on the other. The headboard is fitted with storage for extra supplies and towels. Entry to the Master Suite is via a doorway that opens to the vanity section of the room leaving the view lines towards the bed and bath zones private. 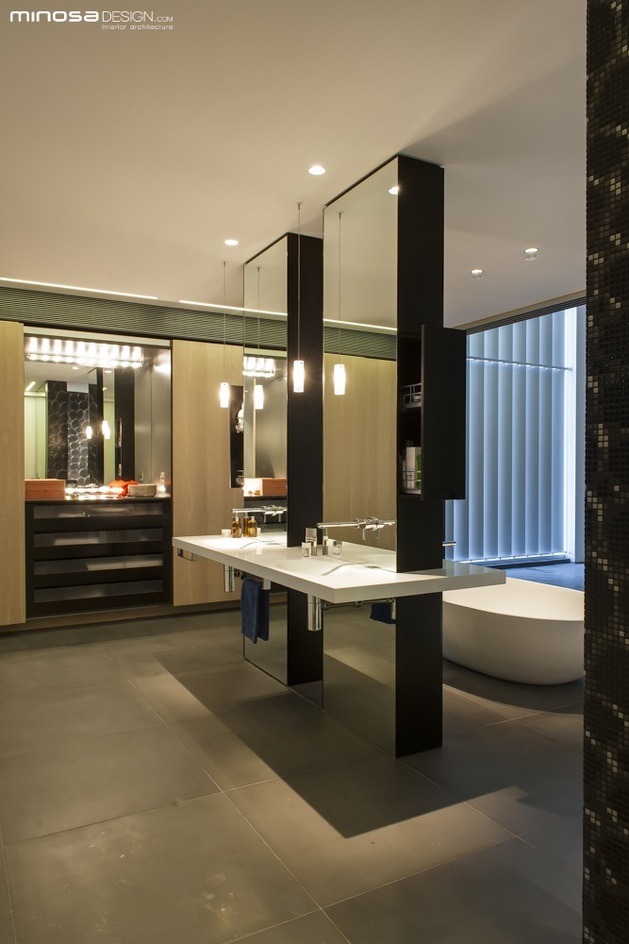 Across from the doorway is the 7.2m wall of closets that opens in sections via 1.2m pop and slide wood veneered doors. 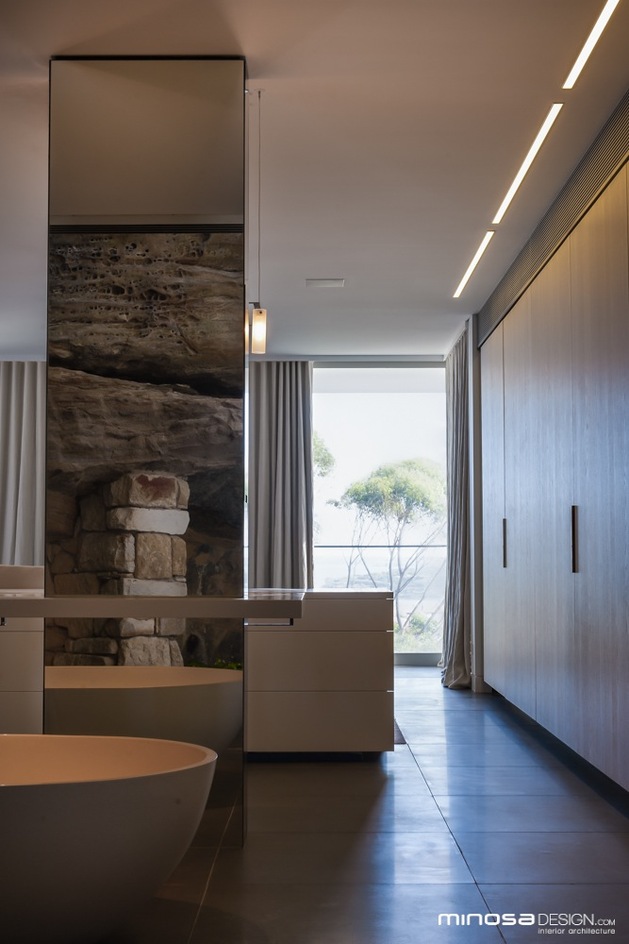 The closet runs the length of the Master Suite, connecting the two terraces.

From one end to the other, this Master Suite is designed for both relaxation and outdoor connectivity. The suite not only harmonizes with the rest of the homes interior but also with the rock face of the cliff and the beach views beyond. It is a place of zen.
Australian Bathroom Designer of the Year – Darren Genner of Minosa 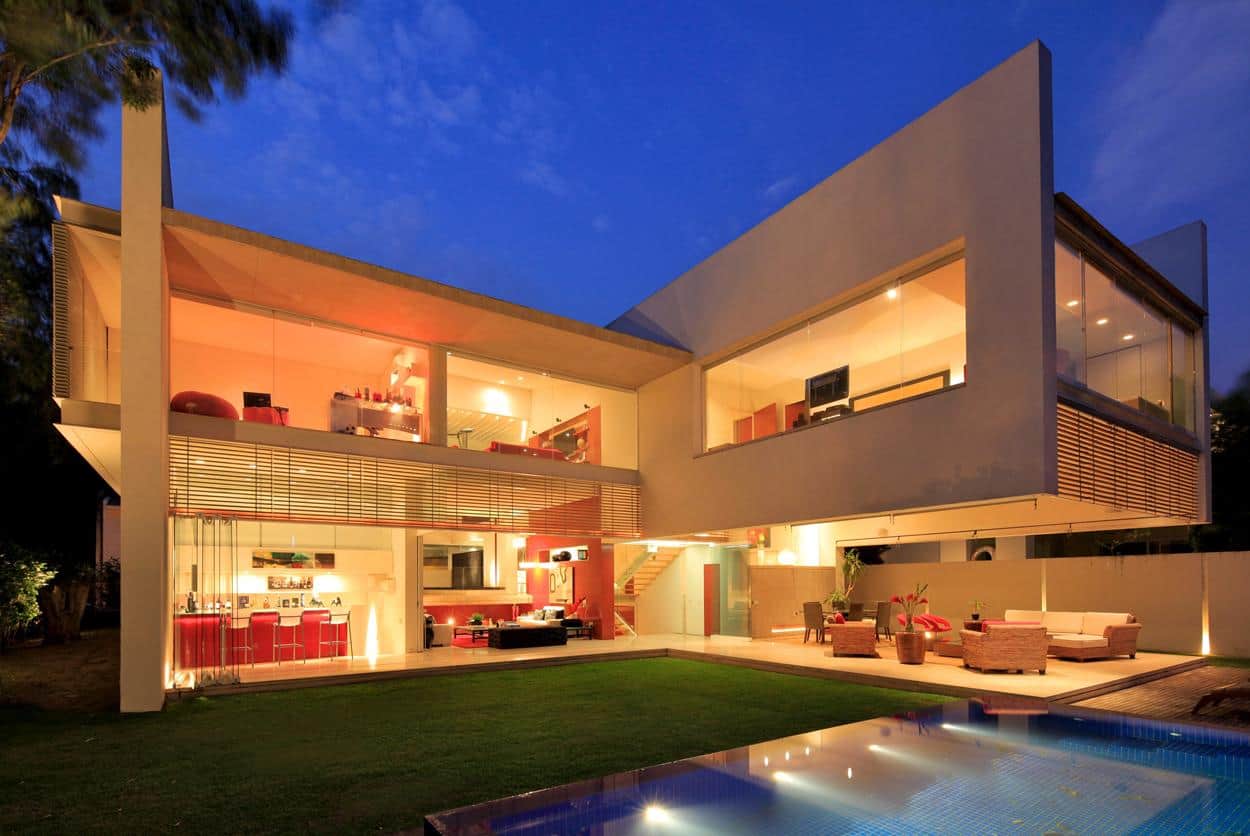 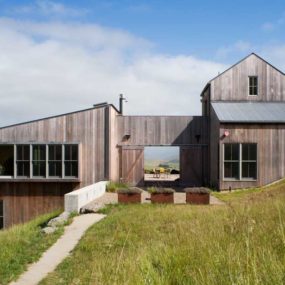 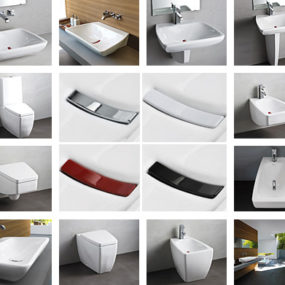 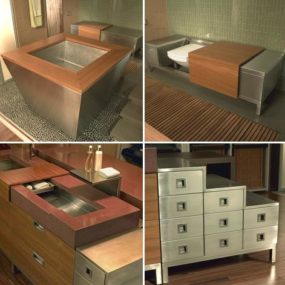 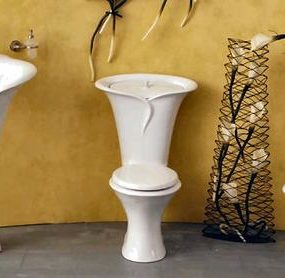