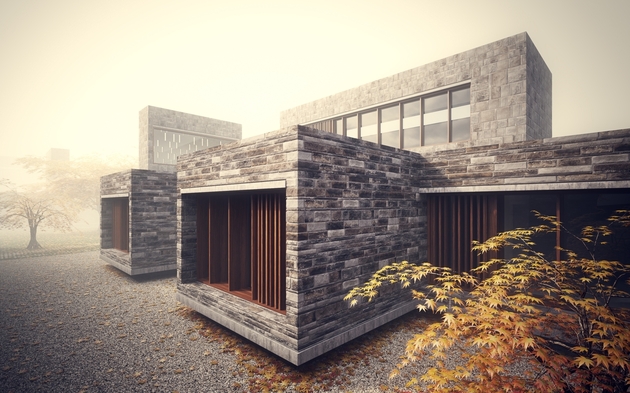 Innie & Outie is a group of homes in Qingpu, Shanghai, China. The group of structures consist of two different types of courtyard buildings – three of each – with all six designed to express an aesthetic of circumstantial and cumulative primitive formations. A morphological process sees each higher level reduce its mass until the top most floors appear as long and linear towers – unable to sustain social activity. This is of course not the reality, as it is only our subconscious and our perception that create this sense of minimized size. Located close to Dianshan Lake, the project is designed by David Moses, Nicole Wang, Travis Williams and Linda Yifei Zhang of William O’Brien Jr. Architects. 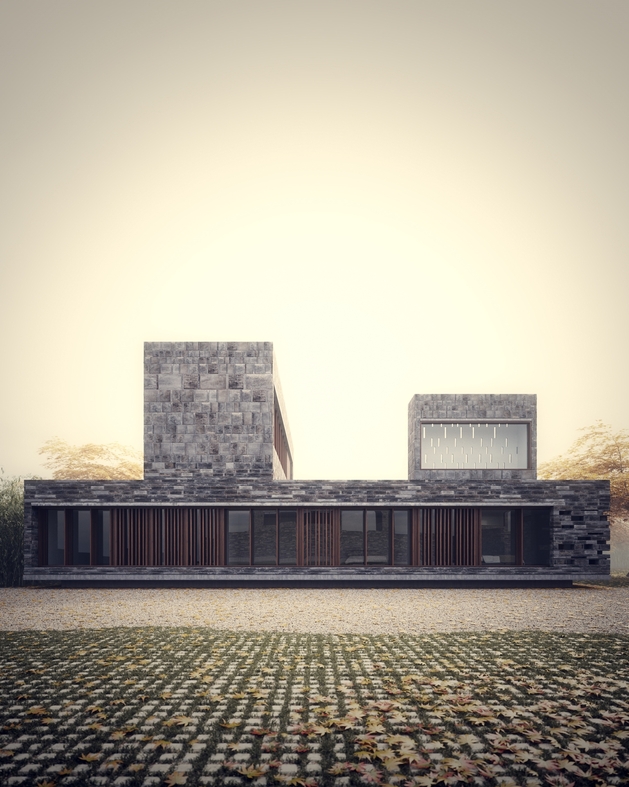 The homes are built using basic construction techniques typical of the region, such as poured concrete and the laying of masonry. Juxtaposed against this cool grey facade is the warmth of wood – extensively used in the main level window treatments. 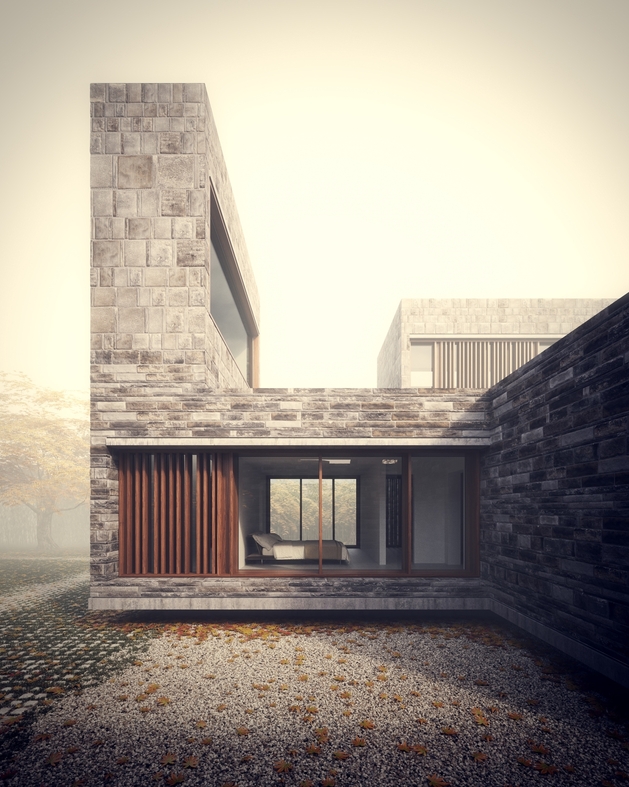 The main volume features long and linear stonework, while the towers present bigger and squarer stones. This changing proportion of the masonry is purposely implemented to accentuate and exaggerate the geometry of the structures. 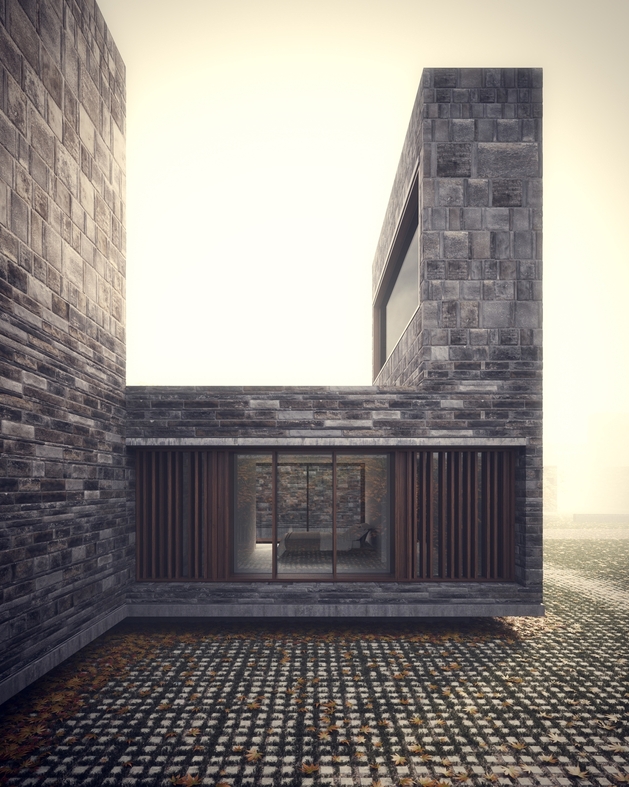 The gradated sizing in the stonework within each tower is slightly different and these subtle differences are the result of multiple stonemasons working simultaneously, each creating a singular statement within a group composition. 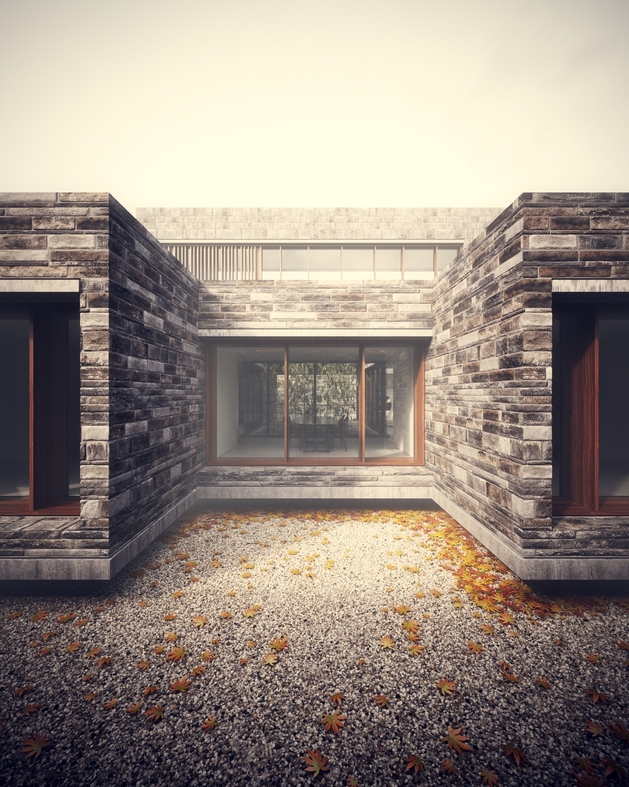 The pattern of stonework chosen for Innie & Outie was influenced by existing buildings built during the Quing Dynasty located in Yangzhou’s Ge Garden. 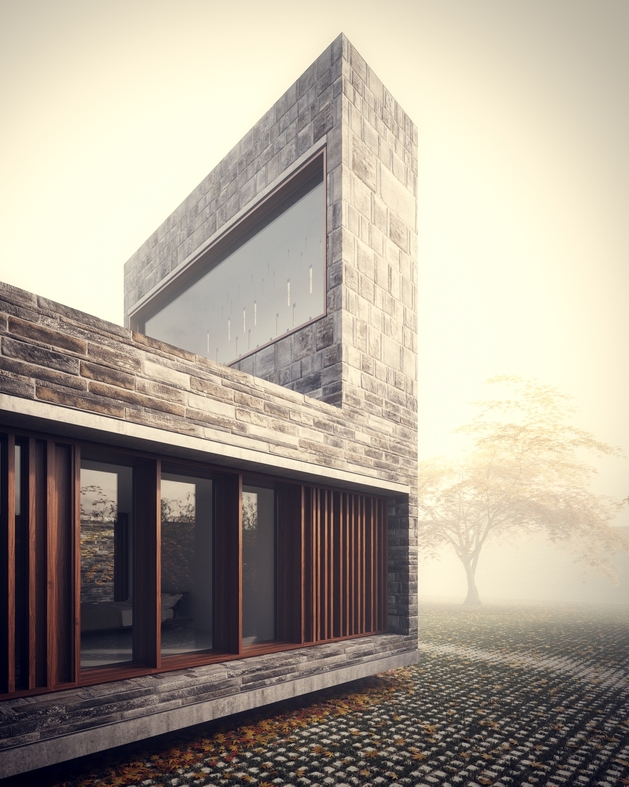 While the masonry increases in size with each volume, the volumes themselves decrease in size. 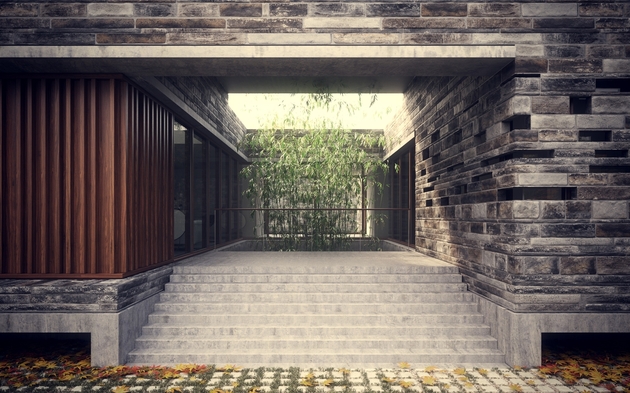 A void in the center of the structure features a bamboo clump that not only adds a sense of organic beauty, but also creates a privacy screen. 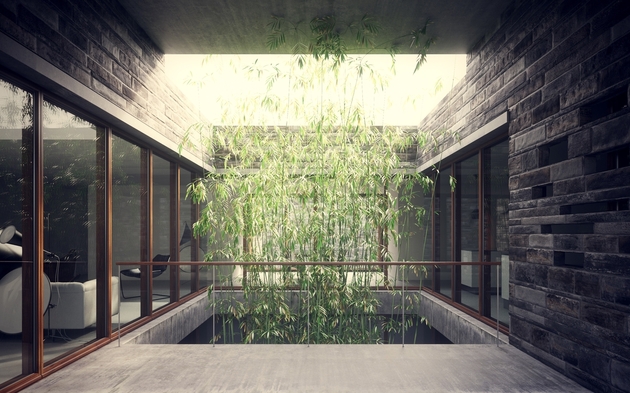 The bamboo soars through several stories as it reaches for the sun. 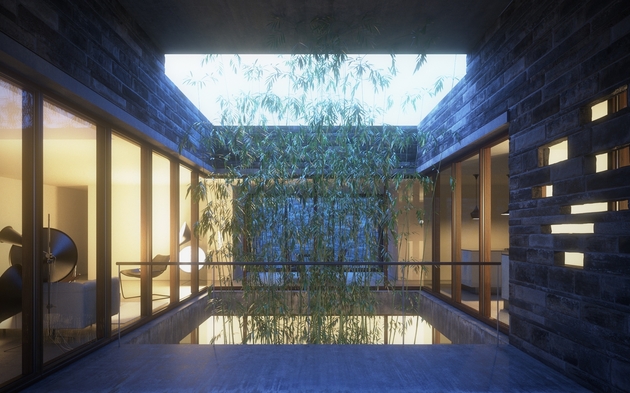 While the courtyard creates a natural avenue for sunlight to spill into the surrounding rooms, it also creates the perfect spot for star gazing. 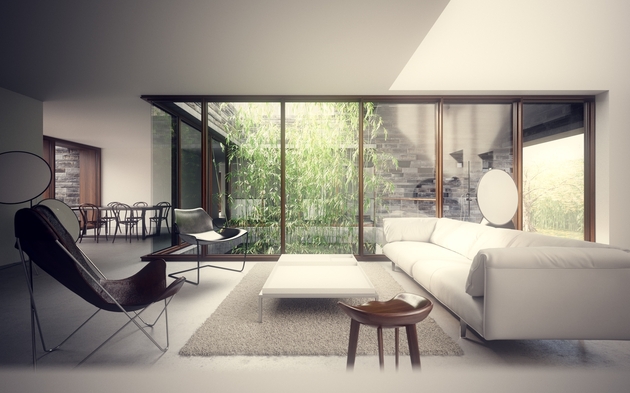 Inside the home, the effect of the fragile leaves on the bamboo outside softens the minimalist design of the social zone. 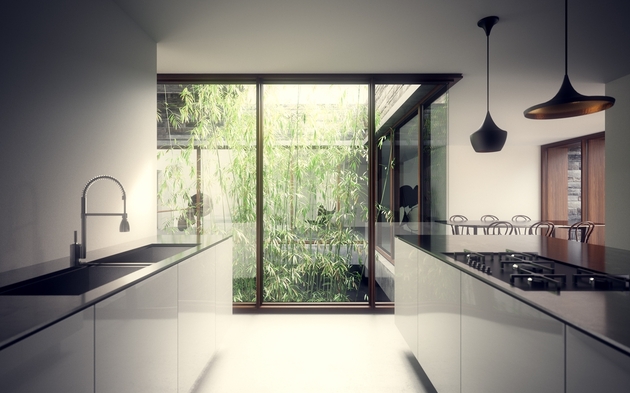 Next to the dining room and just around the corner from the living room is the kitchen, which also has a view of the courtyard garden. 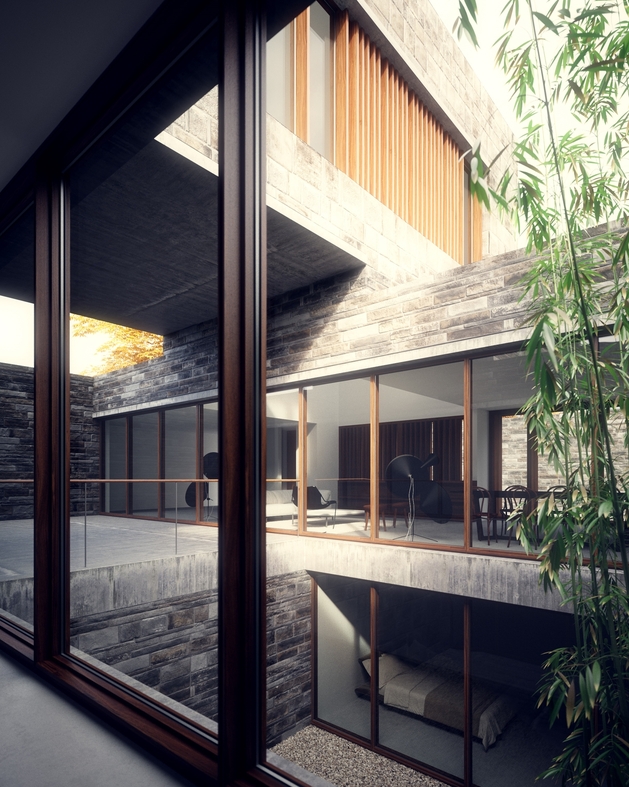 Downstairs is where the bedrooms are located. 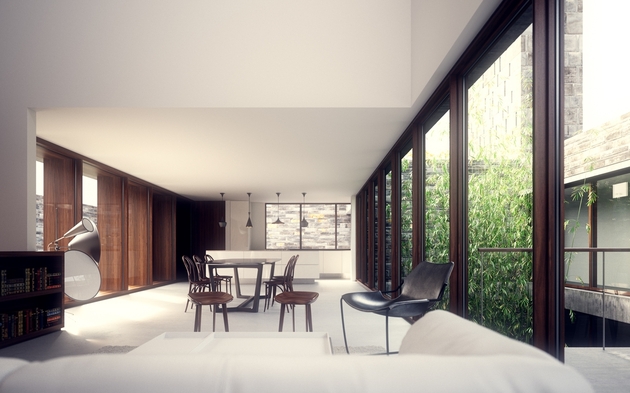 The layout of each of the six homes is based on local cultural values that include such mandates as all the bedrooms and living areas should have a southern exposure, and all the bathrooms should receive natural light. 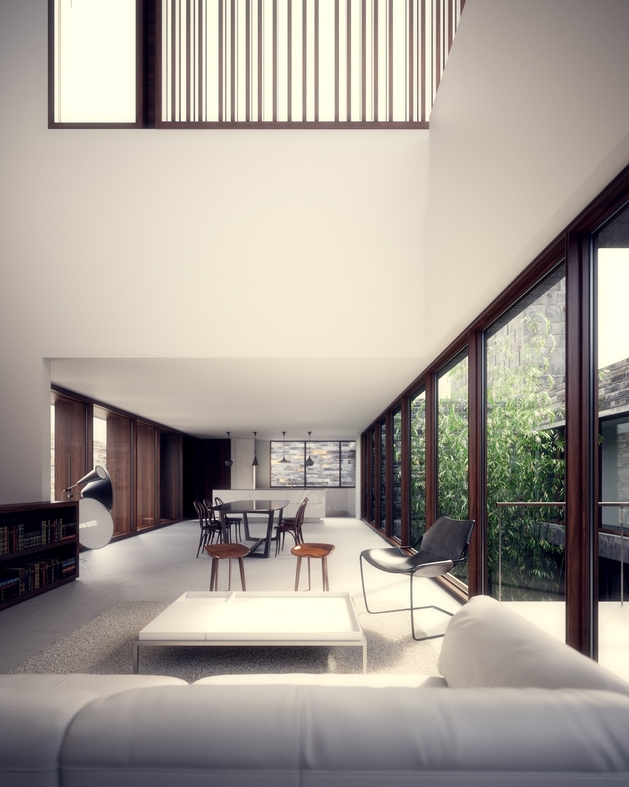 The homes are also designed around introverted and extroverted volumes with the periscopic light-scopes addressing the extroverted requirements. 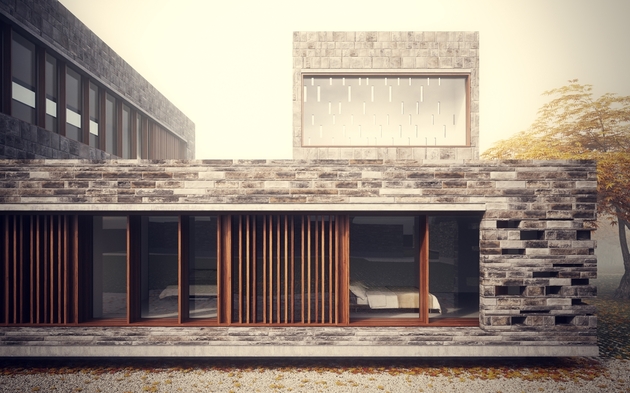 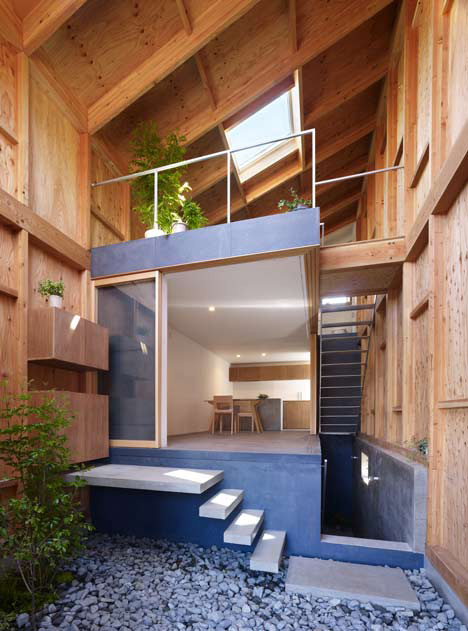 Inside Out House with Inner Garden 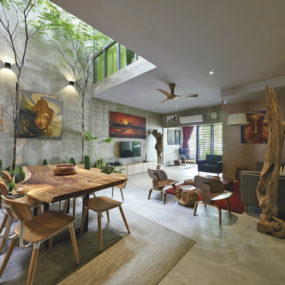 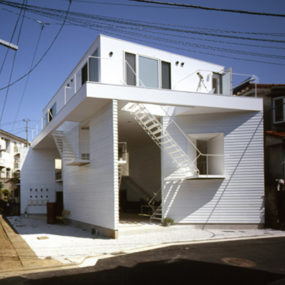 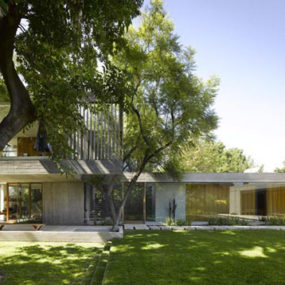 Inside Outside Home Design by South American Architect 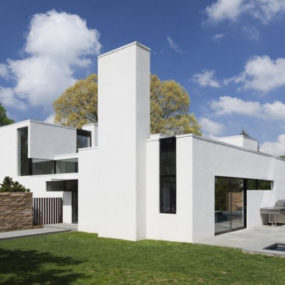 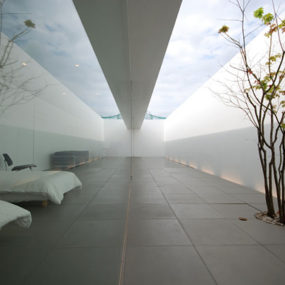 Inside Out House with Inner Garden

Inside Outside Home Design by South American Architect