Topo House designed by Johnsen Schmaling Architects is a contemporary contribution to this countryside setting here in Blue Mounds, Wisconsin. But in spite of its modern edge, the home has an organic quality about it that makes it a part of the landscape in more ways than one. This sprawling, low-scale home is inspired by the terrain, emerging from a shallow slope and surrounded by lush pastures as far as the eye can see. The earth envelops the lower level of this partially buried structure, integrating it into the land. Complemented by a palette of natural materials and glazing, this unusual house is a part of these natural surroundings in every sense.

Starting with its silhouette, the house is almost a natural progression of the sloping landscape. From the architects, “The program is organized in two staggered bars, forming a partially submerged low-slung building volume with a meticulously detailed roof plane that slowly peels itself up from the ground and extends the adjacent fields as a green carpet over the lower portion of the house.”

The house follows this shallow Z formation, zigzagging its way up out of the ground to form the home’s different levels. The slowly surfacing roof is topped by an observation deck overlooking the rolling landscape.

Courtyards are cut into the main volume, incorporating outdoor living areas into its design. But whether you’re inside or out, the architects maintained a sense of continuity by topping it all off with an all-encompassing copper roof. 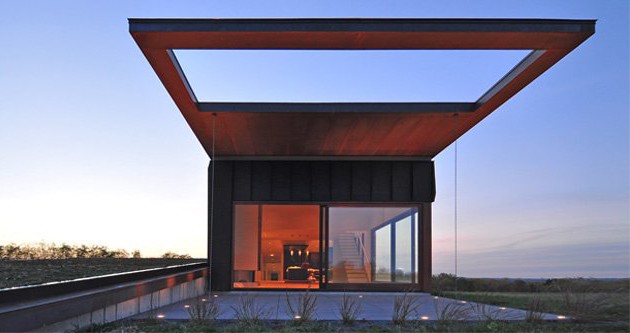 The expansive roof extends beyond the walls of the home in a long, cantilevered continuation hanging over the south-facing patio. A large sliding glass wall opens interiors to this alfresco living space. 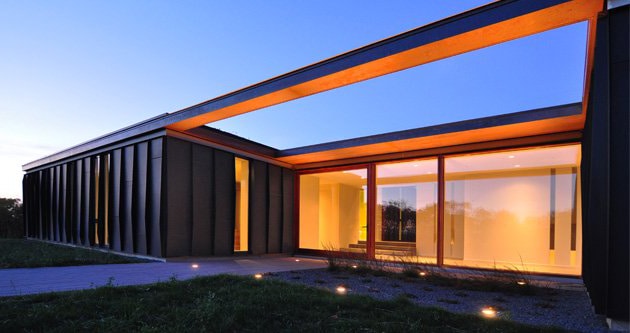 Like the main volume, the sloping roof also incorporates strategic cut-outs that transform it into one of the home’s main focal features. This allows sunlight to spill in through the home’s glass walls, illuminating interiors (even the underground portions of the home!) with its warm natural glow.

From the rear of the house, the rolling meadow conceals the lower level and roof. All you see is this curious cut-out and the glass-enclosed look-out loft peeking out above it all. 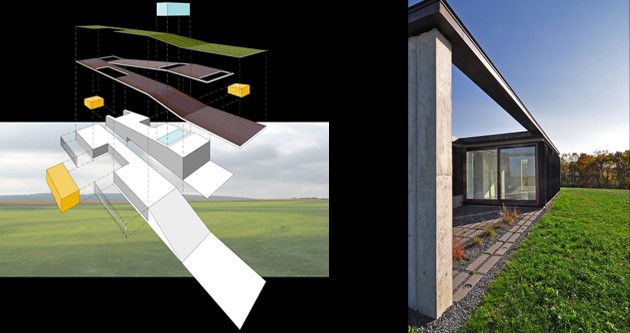 Interiors are a natural progression of the outdoors, according to the architects. “Rooms are interconnected to create a continuous spatial meander that traces the site’s topography: the program is distributed on five individual floor plates, each one of them separated from the next by several steps, creating a progression through the house that leads from the entry at the lowest elevation to a small observatory at the top.” 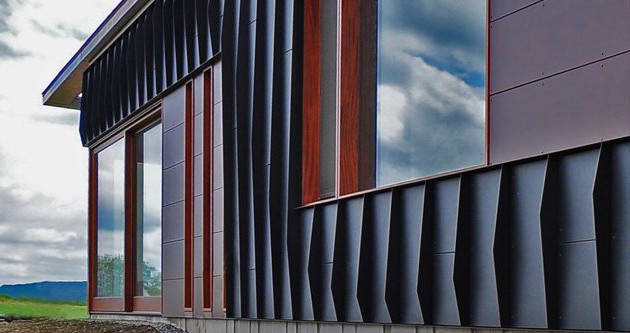 You know the way tall grass sways when the wind blows through it? This pastoral picture is echoed in the home’s facade, which is clad in 190 individually shaped black-anodized aluminum plates, arranged in an organic way to imitate movement. But aesthetics aside, there is a more practical purpose to this unusual exterior. 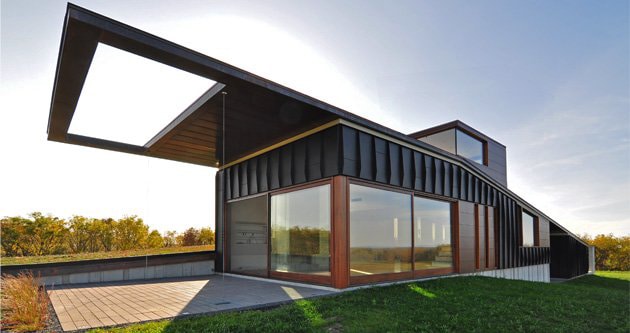 The architects explain: “Depending on the time of the day and the angle from which they are viewed, the fins create a constantly changing veil whose shifting geometry subverts the volumetric purity of the house itself. The fins are an integral part to a high-performance ventilated rainscreen facade system. The rainscreen system is complemented by textured cast-in-place concrete walls whose deep, randomly spaced reveals juxtapose the consistent rhythm of the vertical fins.”

Additional smart features of the house design include a closed-loop geothermal system for the home’s heating and cooling needs, which are minimal thanks to the home’s narrow footprint and natural cross-ventilation. The fact that the home is buried underground also plays an important part in its high performance level, offering natural warmth in winter and passive cooling in summer, while the rooftop garden reduces storm water run-off and adds to the passive cooling effect during the hot months.

You wouldn’t expect such a thoughtful, complex system in the inner workings of this simple style house in the countryside. 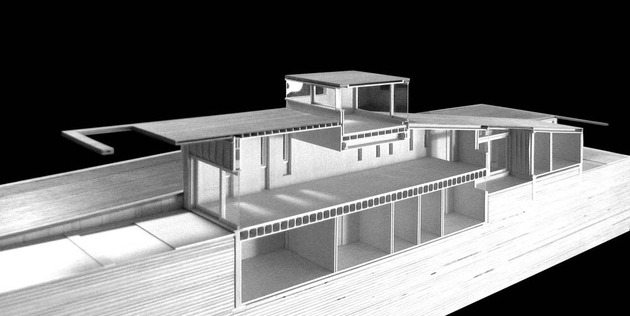 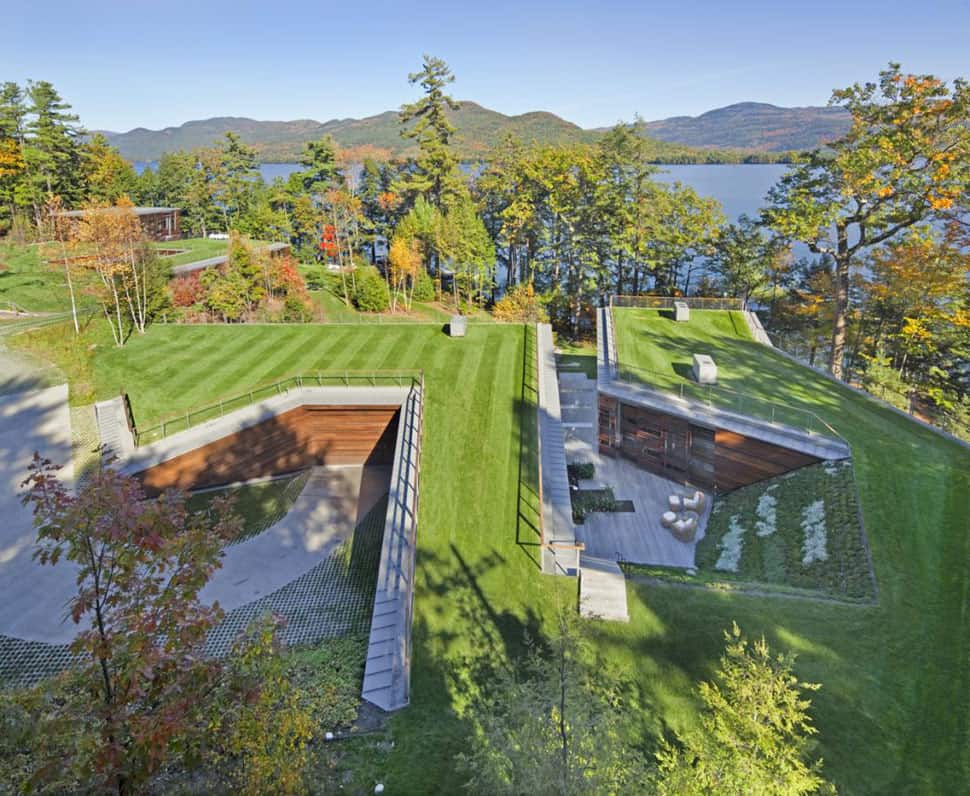 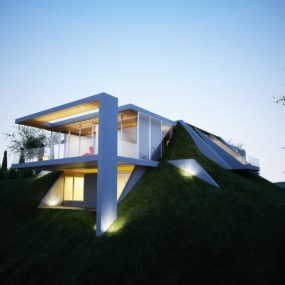 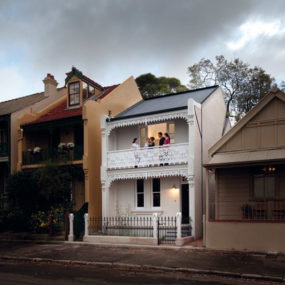