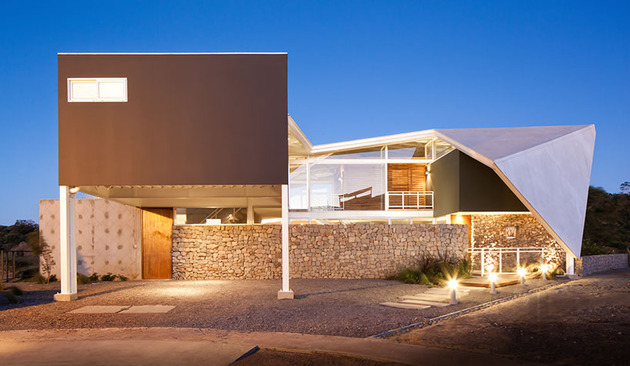 Located on the outskirts of the capital city of the Latin American country of El Salvador, this unique family home was designed with outdoor living firmly in mind. A product of Cincopatasalgato Arquitectura, the dwelling makes use of glass panel walls in nearly all of its rooms, opening up the sights and lights of nature. At the rear, especially, sunlight flows into the residence and makes artificial lighting completely unnecessary by day. Even so, the homeowners are protected from prying eyes from the street, where the glass area is set back between two wings with traditional walls and smaller windows. Due to the walls on the street side, most of the house appears to exist elevated above the property.
Two major architectural elements combine to truly set this house apart from other modern constructions. The most obvious of them from the front is its unorthodox top covering, which is neither arched nor flat. Instead, it forms a sharply-angled shell around all the home’s interior spaces, allowing each room to exist as a rectangular prism while making the entire home an undefinable three-dimensional construct. The other principal feature seen inside is a modular mode of construction, in which every room seems to occupy its own space separate from the whole. In combination, these two features form a fantastically modern vision of environment-oriented living. 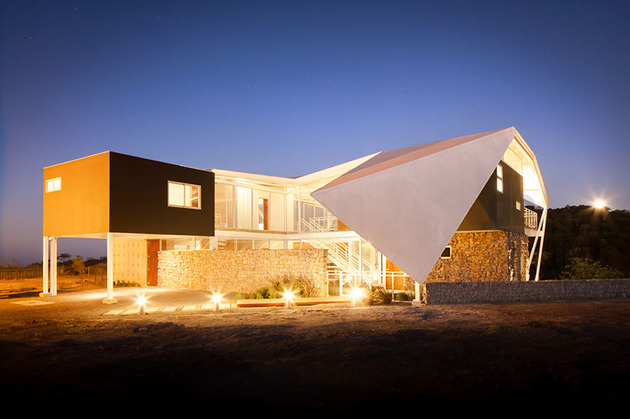 A large angular cocoon surrounds the largely right-angled interior volumes of this creative contemporary dwelling. A variety of materials are utilized to diversify the style of each individual room, accenting a modular layout. 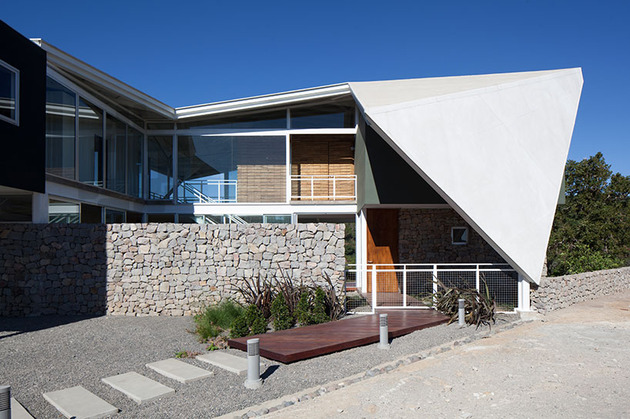 A downturned roof section and a stone wall help to preserve privacy at the front, forming a hidden entry area beyond the initial pathway from the carport.

The house has three stories looking out over the surrounding hills at the back, with access to the lawn or to deck structures on each floor. Somebody at this edge of the residence can move between the top and bottom levels without going inside due to stairs and pathways built into the metal supports for the roof and decks. 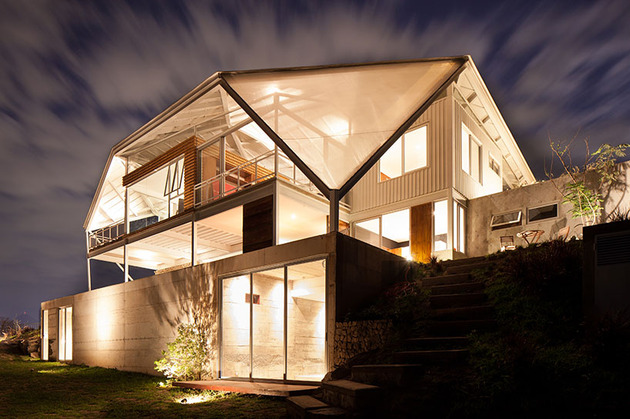 From the rear, it becomes clear that the house is organized in an unorthodox manner. Instead of a single boxy shape, the building is laid out in modular fashion. Each room has its own little “box” to itself, almost reminiscent of famous apartment complexes like Montreal’s Habitat 67. 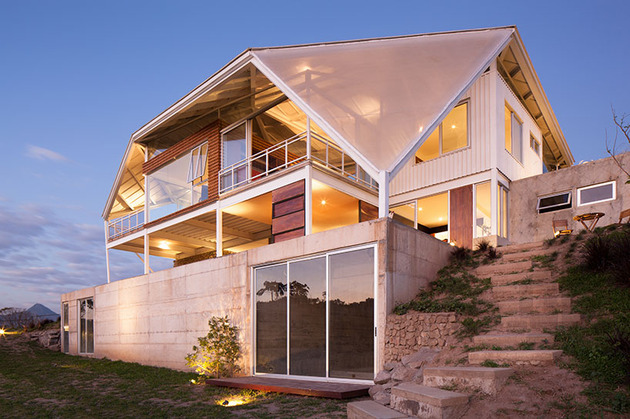 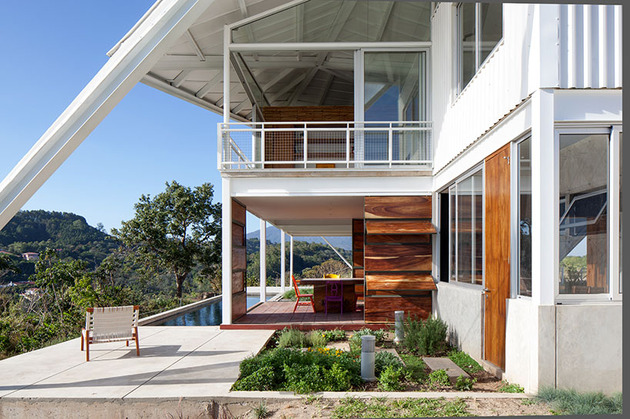 A semi-transparent section of the dwelling’s roof extends down to a point near the edge of its bottom deck. The canopy as a whole provides shade and helps to join leisure space with living space within the structure’s walls. 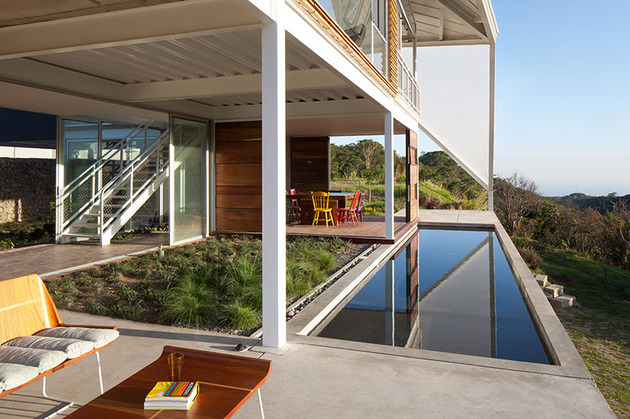 The bottom floor of the house features a patio with walkout access from many of the house’s rooms, an area which includes full outdoor living and dining spaces. Small patches of vegetation are integrated into the deck, helping to connect the home’s design to the low-growing hillside it’s set on. 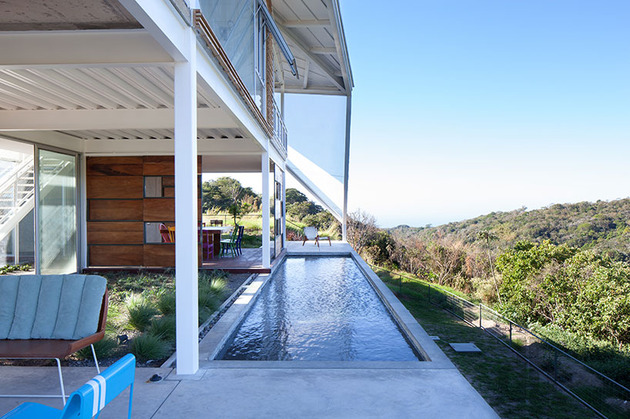 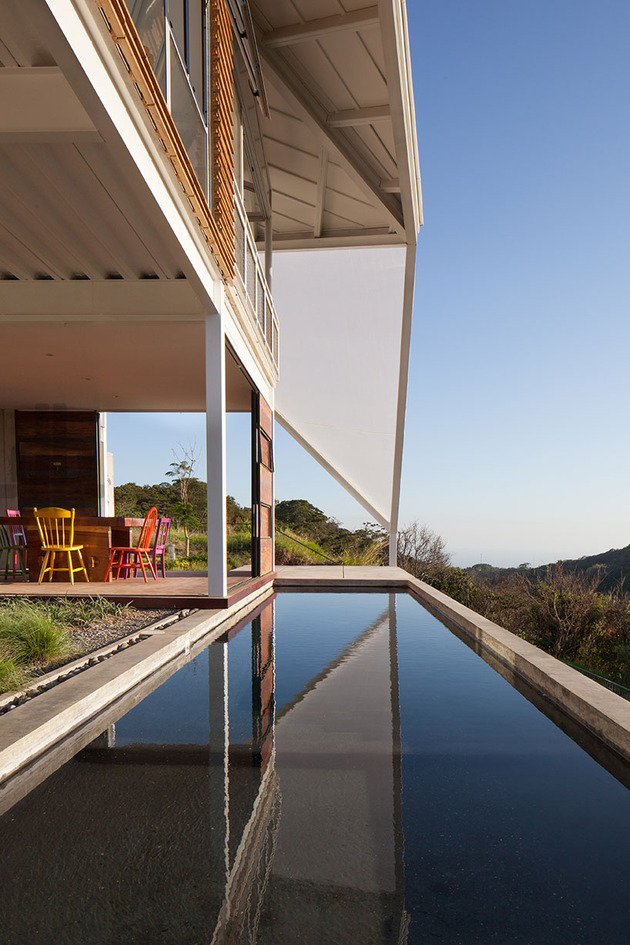 A narrow pool is sunken casually into the patio, making it a more integral part of outdoor activities than it might be if it were given an entirely separate area. From sideways on, it’s impossible to tell that the pool is even there. 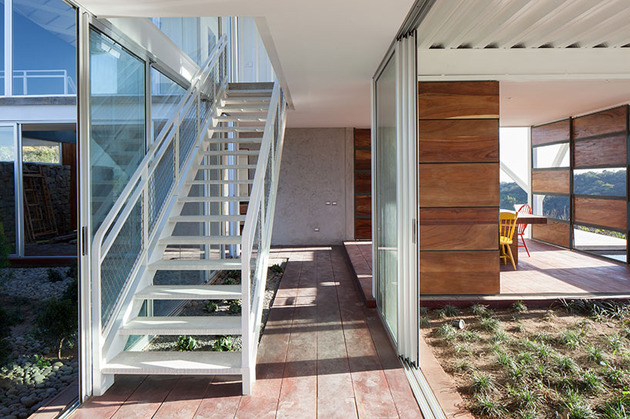 Outdoor staircases and sliding glass doors located all over the rear of the house often make the transition between interior and exterior subtle and progressive. Because of the awning-style roof canopy, certain rooms could be considered combination indoor/outdoor recreation areas. 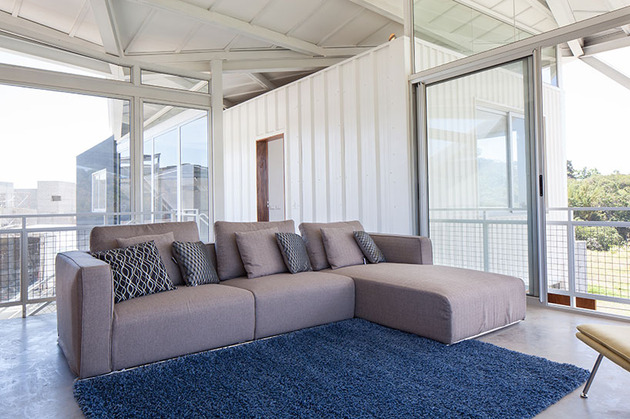 Just above the rear deck, the main living room of the house occupies space underneath the building’s most complex roof section. Every one of the bedrooms can be accessed directly from the living room, each within its own separate container-style module. 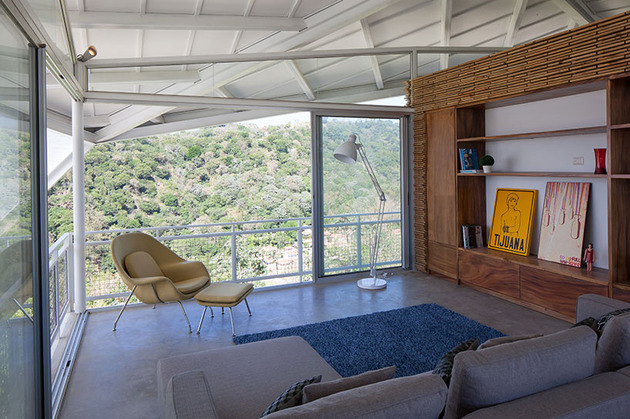 Some of the only built-in storage present in the entire dwelling is this cut out set of display shelves. A bit of color is added to the space here, where the living room backs up to the dark edge of the master bedroom. 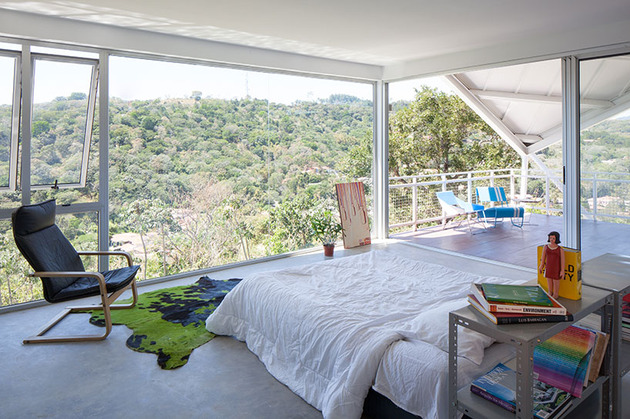 The master bedroom module features one of the largest uninterrupted window wall sections of the entire home, looking out over the hills beyond. Very little structural furniture occupies space along the exterior walls due to the prevalence of glass area, so most of the storage here is arranged centered in the room.
Cincopatasalgato Arquitectura 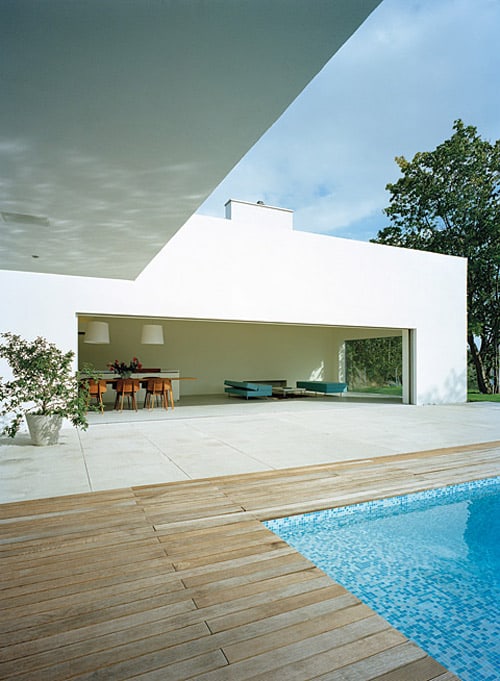 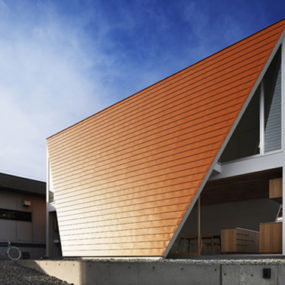 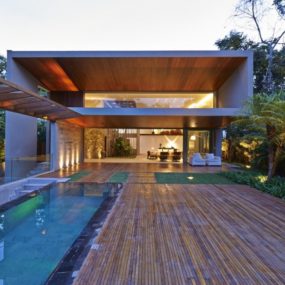 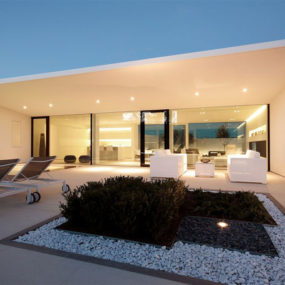 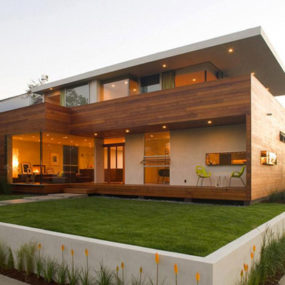 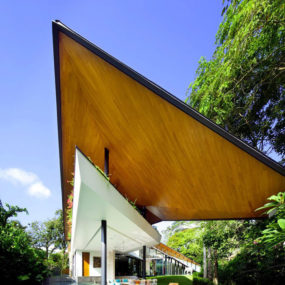