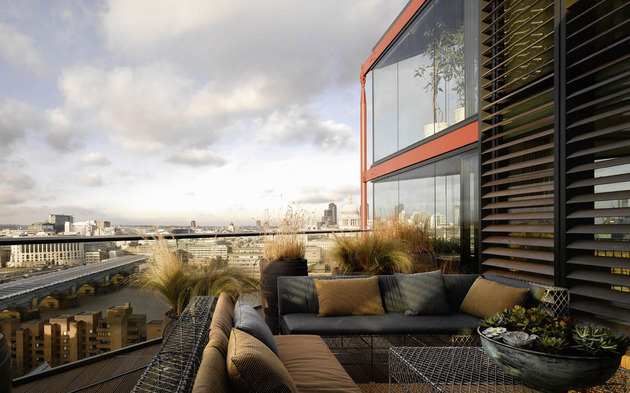 Part of a sleek new complex in London, this fantastic penthouse is a crowning residence atop a luxurious base. With architecture by Rogers Stirk Harbour + Partners, the apartment is defined by acute wall joints and sloping ceilings. Its interior volumes and exterior decks all exemplify the influence of a modern city, blending architectural function with modern-day style. The penthouse is filled with decor design by Studio Reed, and each space has its own luxurious style. A vast open living and dining room takes up much of the apartment, showcasing the span of its floor plan with tall ceilings and sculptural elements on each edge. As rooms become more private, their color palettes soften and become warmer, and ceilings become lower to create a more intimate and personal atmosphere. 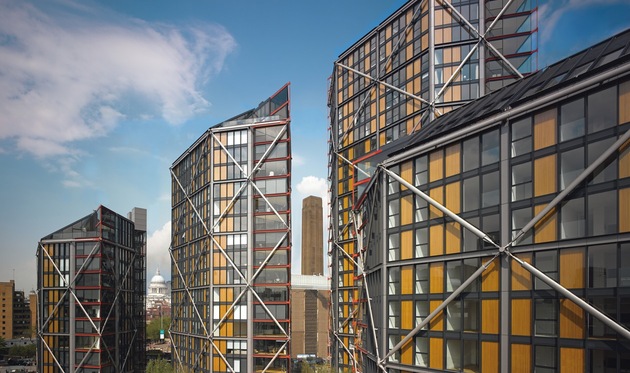 The complex itself is one of London’s most striking modern developments, made up of three towers with exposed metal structure creating an angular facade reflective of contemporary industry in the city. 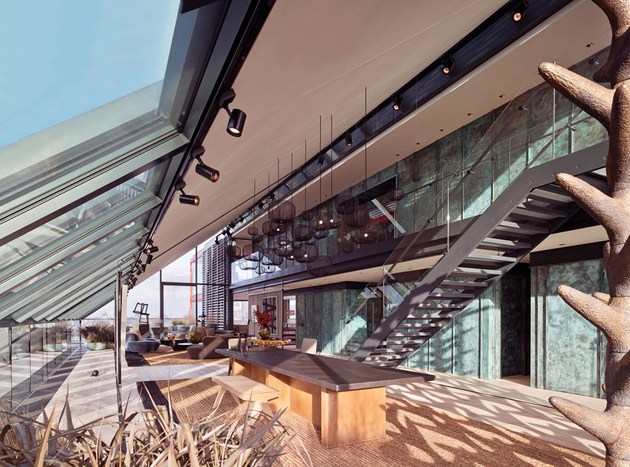 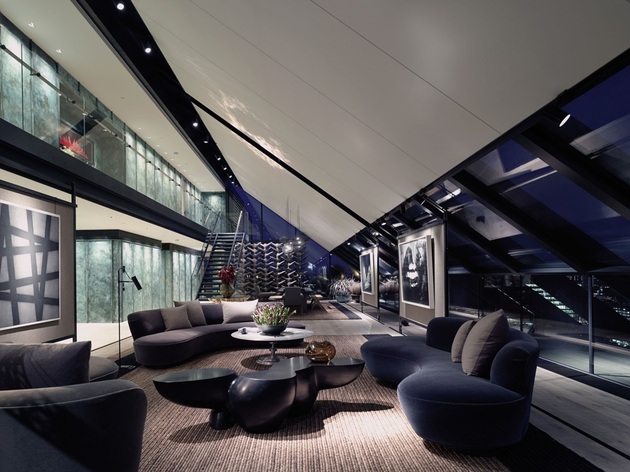 The main room makes great use of its angular ceiling, with a two-story glass facade of rooms at one side shortening towards the zero-height front edge of the living room. The private rooms of the upper level feature unobstructed views out over the main living area. 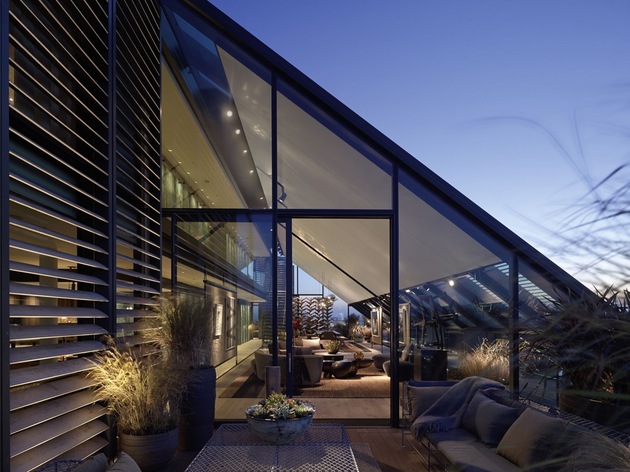 Beyond the edges of the main room on either side, two outdoor decks provide an open-air alternative to the living spaces presented indoors. These decks are placed at impressive viewing angles to see the city’s landmarks.

Another door from the deck leads inward to another combined living space, this one meant more for private use than for impressing guests. This single-story room has warmer hues than the expansive main space, and also contains the penthouse’s only kitchen. 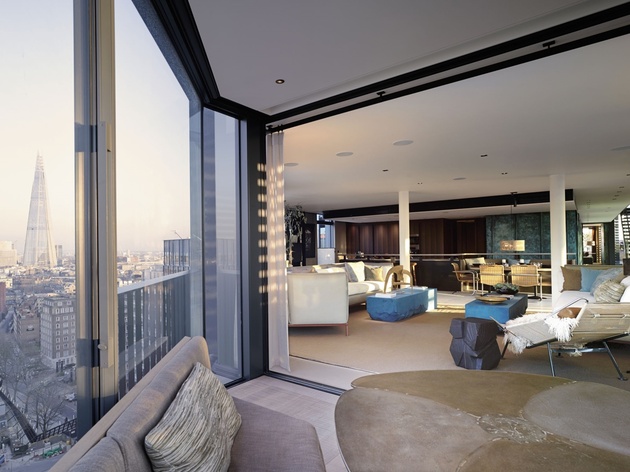 Many of the furnishings inside are uniquely angular and contemporary, with tables that mimick the shape of rock faces and couches which are effortlessly modern yet still plush and comfortable. 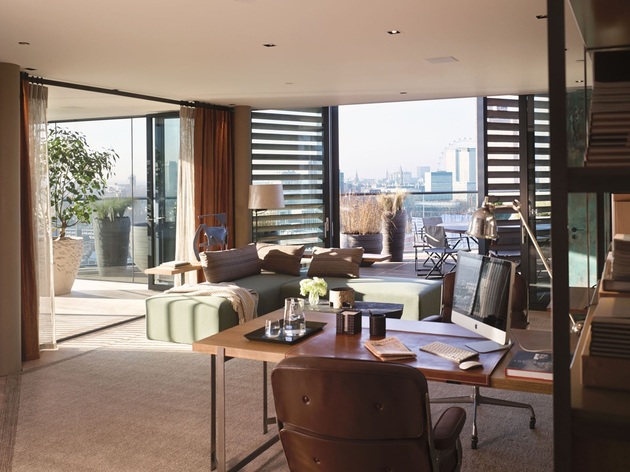 Most of the commanding apartment’s rooms have plenty of floor-to-ceiling window space, including this elegant study which mixes traditional charms with contemporary designs. 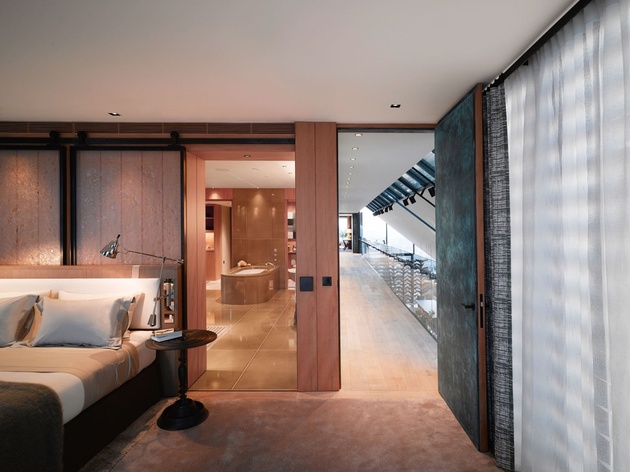 The upper level of the penthouse plays host to a number of bedrooms, including a spacious master suite. Each room on the top floor is laid out along its balcony hallway.

The master bedroom has a shape defined by the slim corners of the apartment building as a whole, and is separated from its adjoining bathroom by a wall behind the bed with entryways on both sides. 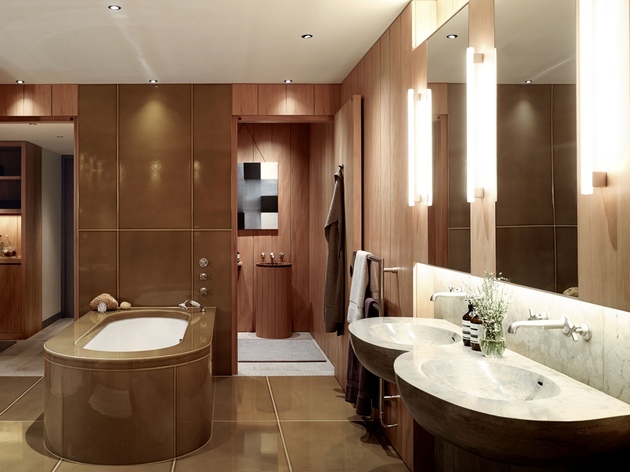 The master bathroom uses wide tiles to create an atmosphere reminiscent of the master bedroom in color, but differing in function. The tub here is not freestanding, but still retains its own identity extending from the wall in the center of the room.
Rogers Stirk Harbour + Partners and Studio Reed 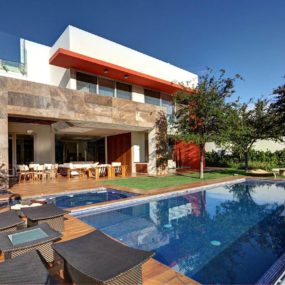 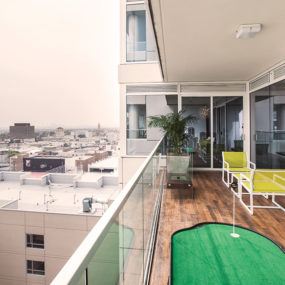